The great war rages in Europe! Head to the front and pull no punches!

Good deal for buying the gold and the crystal but I don’t have any money so because of that in PvP I always lose and also I fight against high lvl players,still beat by a lower lvl than me cuz the stupid deal make them powerful weapon! GG but hard to complete without buying. 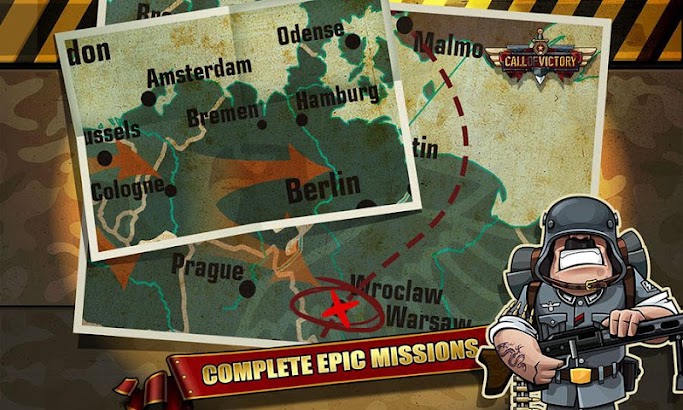 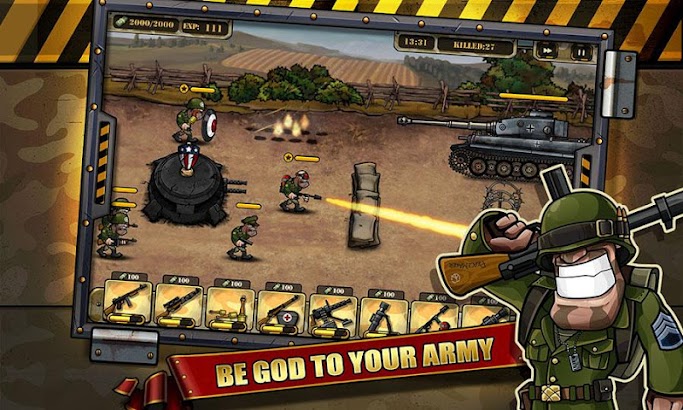 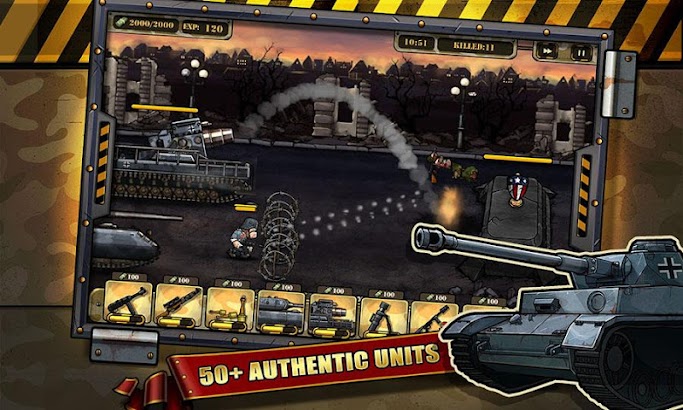 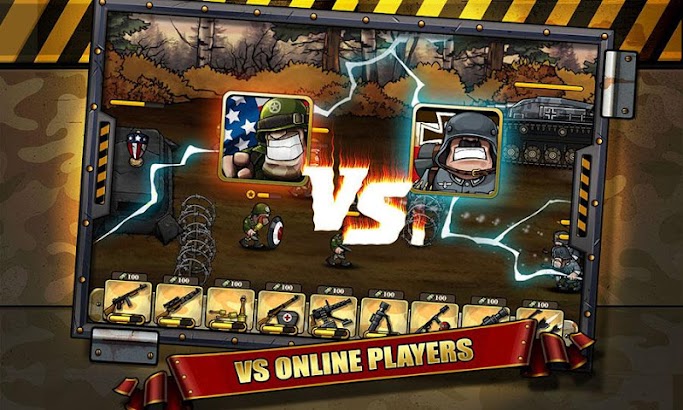 The best ever Multiplayer Strategy Action war game on Google Play! TRY IT!

✓ART OF STRATEGY AND QUICK WIT!

Set in World War II, the game tests your strategic and tactical abilities as you deploy your own troops. Keep in mind that units specializing in espionage can be used to keep an eye on enemy forces. Only if you master your strategies and utilize your troops wisely will you be able to take the field and secure a victory.

✓NUMEROUS SOLDIERS FOR YOUR FIGHT!

Control and deploy more than 50 different and authentic units from the period. At your headquarters, you will be able to recruit powerful squad types (such as riflemen, snipers, pyros, grenadier, rocket soldiers,etc.) to win the war. Each with their own unique specialties. Fight against your circle friends through Google Game Service, or challenge other online players all around the world on the challenging leaderboards.

✓HISTORICAL ARMORS AT YOUR DISPOSAL!

Dozens of WW2 ultimate armored machine (such as M4 Sherman, M26 Pershing, T95, Pz.Kpfw. V Panther, Pz.Kpfw. VI Tiger, Jagdpanther) and a handful of authentic air-support units (like B17 or JU87, etc.) are at your disposal. Unlock more than 30 achievements to upgrade your units and strengthen your armies. Enjoy the fun of collection!

It’s easy to get started and to keep going. Simple tap and line-drawing controls make the game accessible to all gamers. Online multiplayer, as well as a lengthy campaign and skirmish options in challenging maps with unparalleled visuals are available (city, mountain, country and forest). Once you make your first tank and decimate the field, you will be hooked.

Like us on Facebook community for the latest news: http://goo.gl/xHu9Pu
Write to community manager for sincere support: [email protected]

If your little commander like Call of Victory, please check our other game:
+ Ace Wings: Online
+ Black Operations
+ Warfare Nations

+ Optimised with iOS 10.
+ Bug fixes and security improvements.
Your positive reviews keep the updates coming! Thanks for your feedback!
– Call of Victory Team

Ratih Wiedjayanti April 29, 2017
Good deal for buying the gold and the crystal but I don’t have any money so because of that in PvP I always lose and also I fight against high lvl players,still beat by a lower lvl than me cuz the stupid deal make them powerful weapon! GG but hard to complete without buying.

Chaz Machine June 27, 2017
Pay-to-win. I hate pay-to-win. Ruins the game. If you don’t pay then you make very little progress.

Ruaidhri Jordan April 28, 2017
Had this game on my old phone and loved it but I recently got a new phone and on start up (where it asks to sign in or play as guest), I cannot pick an option and therefore cannot play, would be happy to rate five stars if this is fixed

Diana Ruiz May 21, 2017
I say that this game is Amazing I loved playing it but I hate it and it deleted everything and I had to restart and I wasted money on the game to buy every single purchase for the Germans the one I liked most was the maus I’ll never get to play with it can you tell me if there is a way to get my guest account back if you can’t than can I atleast get my money back.

Naeem Momin April 14, 2017
Rewards needs to be higher or cost needs to go down. Impossible to advance unless if you spend a good amount of money

Jackson Rutledge April 7, 2017
Just like trenches i love it but missions should be worth more gold like 300 to 350 to advance throw the game a little quicker

Charles Hill July 2, 2017
If you complete a extra goal you won’t get that star and it will only give you one star per levelPlz fix it

armymen favorite inchon Laughter June 27, 2017
Good game but takes a long time for you to get new stuff without money.

Digital Rim June 24, 2017
The Firlemen is wrong the have a rifle not an SMG get it together

LaSonne Singletary April 5, 2017
Amizing game make a. Call of duty victory but you control the people

Life’s good May 24, 2017
Migraine enducing, ripoff, cash hungry garbage SAVE YOURSELF AND DONT GET THIS GAME!!!!!!

Faith East September 22, 2017
This is the most awsome game ever in your 1 fan i just don’t like buying things cause then people can hack me make more awesome games like this

kyle heath May 21, 2017
Really fun game I love games like this anyway as I loved the world war games on PC

the worst Channel ever August 13, 2017
This is a buy to win game i was a level 8 an got beat by a level 1 because he bought a lot of hight level men. The game has little to no strategy because you can just buy everthing

Mano Qasqas April 1, 2017
An amazing game and it is a good time killer. Super fun and I recommend it

Christian Ramsay April 22, 2017
Like this game but different form Trench war but this game is way better

UnknownAugust 30, 2017
It’s pretty good it’s just that you need gems to do a lot of stuff and the range of units is stupid

legend ghost May 13, 2017
This is the best world at Wargameis have played

DuckGamer22 YT September 16, 2017
This game is epic way better and shows legit gameplay and also try to ban players who are low level but have everything so plz try to ban those players

Star war September 27, 2017
Hey could you make the machine gunner wear a helmet like the riflemen for the Germans.

Josh Fraser September 10, 2017
Brilliant game love the controls really easy to get to know also the strategic part is amazing keep it up

jake2swag123 gumdin May 20, 2017
This game is the best game I played so far
Tags
VOLV Interactive