Couldn’t play it. Chicken be moving when I’m quiet then stand still when I yell an sing. I think this is a prank to get people yelling at they’re phones, thinking the stupid noise they make affects the game. Sorta like when I was a kid I’d get to “play” the arcade games but didn’t ever have to put any money in. I’d wiggle the joysticks and press buttons and watch the street fighters jump around, thinking I was controlling it. You guys are sneaky like that. 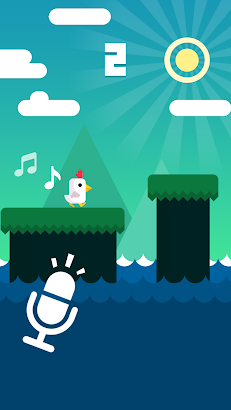 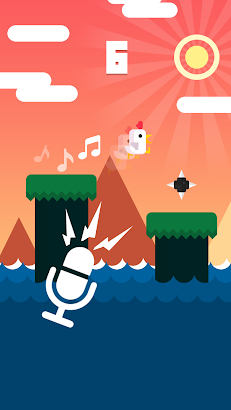 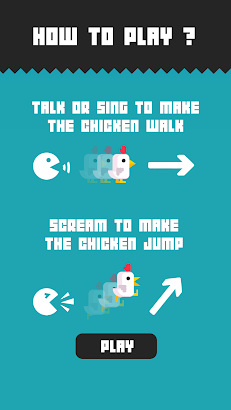 Chicken scream is a fun and interactive non tapping addictive game where your voice controls the chicken.

Make a lot of noise to force the chicken to run and jump or stay quiet to control the chicken moves slowly.

Get your high score and collect points for getting far in the game but be careful about the obstacles and the water!

Tshylea42 October 5, 2017
Couldn’t play it. Chicken be moving when I’m quiet then stand still when I yell an sing. I think this is a prank to get people yelling at they’re phones, thinking the stupid noise they make affects the game. Sorta like when I was a kid I’d get to “play” the arcade games but didn’t ever have to put any money in. I’d wiggle the joysticks and press buttons and watch the street fighters jump around, thinking I was controlling it. You guys are sneaky like that.

Ibrahim Akmal August 7, 2017
This is the most funny game ever MUST DOWNLOAD IT Awesome Graphics You Scream To Make It Jump Amazing Controls And Levels You Must Download It!!? Actually it makes you laugh so funny Hilarious ????

Chrysa1is TYPE2000 April 28, 2017
The annoying ads influenced my decision to uninstall. That and i couldn’t find myself committing to the game as i got bored quite quick. I refuse to pay to stop ads just incase that there an option.

Joel Liston May 16, 2017
It was a neat concept but it didn’t work at all. Whenever I talked it took a couple seconds to actually register and playing a game like this with that amount of lag is impossible

Mallarree Ries May 15, 2017
ABSOLUTELY LOVED IT! Also if you hate ads then just hit your home screen and then hit that square button or the one that brings up recent things you didn’t close, click back into the game and it allows you to x out of it completely!

Falcon Muffslam October 22, 2017
Ads are frequent and long. The audio sensitivity is difficult to judge. There is no mute button for the game’s audio and the sounds interfere with the movements. When I jump, he lands and jumps a second time from the sound of the landing or a coin. Have to turn the media on my phone all the way down to fix it.Add game sound settings or make the music and movements not register for the chicken. Shorten the ads. And maybe change the visuals to be a little less “flappy bird”-like.

Dew Gaming May 29, 2017
I love this game. If you dont like this game your home screen button go to settings turn on airplane mode then hold your power off button then click power off then throw your phone out the window and play flappy phone ?

UnknownOctober 3, 2017
I love this game but cool it down with the ads. One came on while I was playing and the sound messed me up. I know the ad was on this app and not another because when I was done I looked at the applications currently running and this was the only one. Seriously not cool.

lily c June 17, 2017
Ads are way too intrusive in this game. You can’t skip them early and they play very VERY often. Too bad, because this is an otherwise fun game. The ads make a 4* game be a 2* experience at best.

Sam Waugh August 17, 2017
Too many ads. Used to be good until the devs got greedy. There is 2 minute unskippable video ads now that play after every 3rd time you fail that essentially ruins the fun.

Roberto Copello October 8, 2017
Stupid fun especially drinking or with friends but the ads are waaaaaaaaaaaaaaay too long and frequent. What happens to 10 second ads or a screen pop up? I have yo sit through a 30 second ad every other life?

Benjamin Gamez October 16, 2017
I could be in a quiet room, put the mic on the least sensitive setting, hold my breath not touch my phone, and the damn chicken would still move on its own. Registering sound. I will no longer play it. There is a glitch somewhere for the game to registering sound.

UnknownAugust 7, 2017
Fun to play, but make sure you take breaks. It can make your throat hurt a little. Also, there are plenty of ads- but it doesnt bother me too much…

Nora Predeva August 1, 2017
The game does not work, and I even got the version with no ads. The chicken moves whenever it wants and does not seem to be taking my microphone into account at all. Whispering and yelling make no difference.

Kaitybugg14 ! June 16, 2017
I was excited to play this game. And i knew the kids i babysat would love it. But it never jumped. No matter how loud i acreamed for it to jump, it never did. I deleted it and downloaded again. But still nothing. I was very disapointed.

Top Ten May 17, 2017
You look like a stupid while playing this game shouting, screaming, whispering singing songs. But anyway loved it

J Westaroo October 12, 2017
Small ads at the bottom of the screen I can deal with just fine but video ads that take up the whole screen as well??? Uninstalled the moment one of those came up

Ashton Bridge October 18, 2017
Great game, but way too many ads. Everytime you die, a minute-long ad pops up and most of them you can’t skip. The game is fun and can be addictive except for the fact that the ads ruin it.

Lets Gamer May 8, 2017
Would be nice if the chicken could actually jump sadly it does not. I just looked like a retard screaming and it still won’t jump

Siddhartha Narzary May 6, 2017
I have found the simple hack of this game you now no need to scream just blow a air in your phone n it jumps …awesome try it only blow

Sarah Harras August 4, 2017
I LOVE THIS GAMEOK if you HATE ads then put on airplane mode,cause I’vebeen looking at some coments and alot of them rate it like 2 or 1 stars beacause of it and I think that is the most stupid reason to rate it bad . The consept is GREAT and I think that it is funny when people look at you cause you are constantly wispering and screaming and it is funny. Just get the game cause it is fun and stop looking at other coments cause almost every coments has something bad so JUST GET THE GAME and delete it if you don’t like itjust stop hating please ??

Kevin Dhale dela Cruz July 5, 2017
The sound detection is bugged. I mean even the sound of the coin was being picked up. I can only play this game with the game muted. And there’s no way to mute the game! Thankfully Samsung has Game Launcher.

alphasam The Ruler April 30, 2017
This is a pretty cool and good game for what it is. Fun to play when you’re home alone but you might look like an idiot in a crowd.

Joey Erlewine June 22, 2017
I love it.. Sometimes pisses me off but its a great stress releaver

Eric Lowdermilk August 21, 2017
The adds are annoying but I like there app if there weren’t so many adds it would definitely be 5 stars ?

Priyanka Mallavoolu May 25, 2017
Quite interesting concept… Singing and screaming for the chickens is not seen in any other game. ?

Allan Hidalgo April 30, 2017
Problems with the the microphone in my Samsung note 5 nougat 7.0. I tried the sensibility but it doesn’t work

Michael Becksfort June 30, 2017
Chicken does not respond to sound. Jumps at whispers and doesn’t jump for screams. Very annoying.

Maria Durranie June 21, 2017
Just wow and more on it to move to path just incrideble the starterpack was just pathetic i meancoverplz change it although it have no words

UnknownMay 14, 2017
Chicken Scream is an amazing game. If you are in public,you might look a little crazy, but it’s a great game!

Nikola Kaev May 3, 2017
The game is terrible intrusive adds .. other games ask you to watch a add and you will get some reward but not this one

Shreya Chheda June 24, 2017
Way too many ads! It intrudes into the gameplay experience

UnknownJuly 20, 2017
Funny Suggestion: go to a place with a lot of people that is pretty quiet and play this game as if no one were there.?

UnknownJuly 28, 2017
It has to many adds i think you should dowlode this app its great and you have to controlet with ur voice you could talk you could sing and there are diffrent games and its fun.?

Nevaeh October 18, 2017
Game sucks because it’s either too sensitive or not enough. Chicken is picking up background music and walking off the edge. ?

Karl Saran May 11, 2017
Walks for no reason the amount of yelling isn’t consistent sometimes jumps on a whisper other times you can scream and it doesn’t jump

Alaa Mouhamed June 10, 2017
So funny game and what a creative idea to make a great game like this big credits to the developers you guys are awesome and keep developing games please