Good game but i need to send a report for my acount that is bug. All golds, gems, staminas and account level went back to zero. Character level and items were not affected though. I still manage to find ways to play the game but the issue is there. I love playing this game alot so pls help me fix my issue. I provide a screenshot if needed.IGN: kupzzzPH World 2 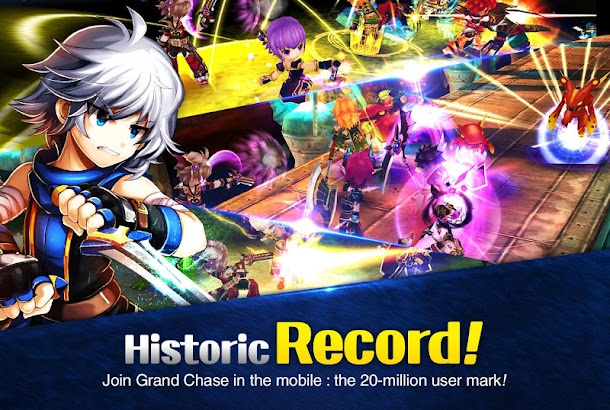 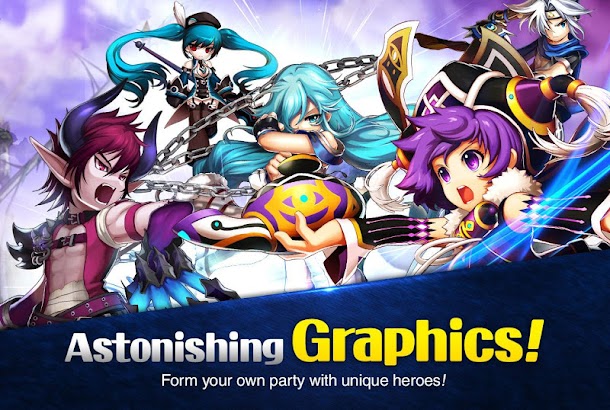 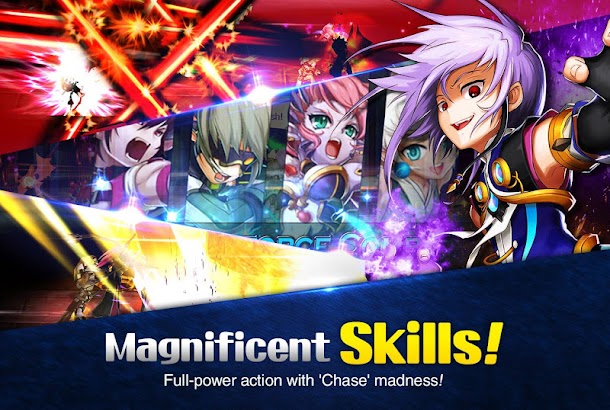 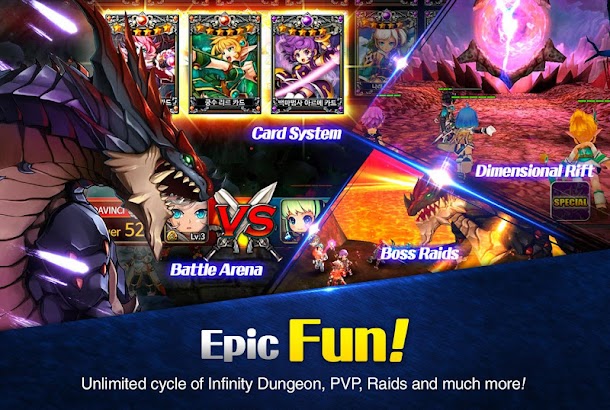 As you did in 2016, enjoy Grand Chase M in 2017!
We will do our best to provide you a great gaming experience!

1. Explosive action and stunning graphics that everyone can enjoy!
An intuitive Auto Battle system that makes it simple for anyone to play!
A 3D action RPG with outstanding effects and a powerful impact!

2. A whole new kind of RPG offering a true union of action and strategy.
Equip cards with powerful stat boosts to create the strongest team!
Dominate the battlefield by utilising the distinct skills of each character!

3. Epic fun and not a moment to rest!
Earn EXP and raise your team into 6-star heroes using Character Synthesis!
Never a dull moment with a huge variety of dungeons, raids, battle arenas (PvP) and much more!

– Dungeons: A total of 180 stages available in 3 difficulty levels! Obtain 3 stars in every stage for extra rewards!
– Boss Raids: Challenge the powerful Berkas to obtain the most coveted item in the game!
– Battle Arena: Be victorious in the PvP Battle Arena and become the next Grand Chase!
– Hall of Heroes: Summon phantom heroes and join forces with friends to destroy them all!
– Dimension Crack: Challenge your endurance in epic battles using 5 parties made up of all your heroes!
– Wanted: Take on the role of a bounty hunter and earn Attribute Essences to evolve characters!

Enjoy Grand Chase, the game loved by 20 million players around the globe, now on mobile!
Witness the rebirth of Grand Chase on your mobile! It’s a whole new way to play!

carl tuano October 5, 2017
Good game but i need to send a report for my acount that is bug. All golds, gems, staminas and account level went back to zero. Character level and items were not affected though. I still manage to find ways to play the game but the issue is there. I love playing this game alot so pls help me fix my issue. I provide a screenshot if needed.IGN: kupzzzPH World 2

jefferson claus October 2, 2017
Attention!!!Please be inform that this game is eating away your data especialy to those data users like me. Im stuck in 3/22 data loading and it keep saying you dont have stable connection while i already have, and when i checked my balance my data balance is already gone so sad ive been playing this game for years and this happens after the latest updateIf you fix it maybe ill give it a 5 star TIA

Juniadi Junet October 7, 2017
appologize for the rate but i used yo have an account and i decide to change my phone when i try to log in my account just reset to level 1 i tought when i finnish the tutorial i can get back my account but it is not can u help me? i give this game 5 star 6 month ago but now i lost it all

Developer Davincigames Co., Ltd. June 9, 2016 Please accept our sincerest apology for any trouble this may have caused you.
If you have an inquiry or opinion, feel free to contact our customer support in the game. We highly appreciate your feedback as it will help us in becoming better at what we do.

Ruel John Alimon September 28, 2017
Unfortunately GrandChase M has stopped. I keep getting this error ONLY after I got the recent update. Reinstalled the game 3 times. It was working fine then after it updates and gets the files needed it starts crashing again. Some thing is definitely wrong with the files. Played this game for years and the recent update is the only one that has caused this.

Queen Kay October 9, 2017
Dear Davincigames Co., Ltd,I’ve been playing this game since before the transfer and I must say that there have been several improvements made since the transfer. However, there are-and I’m sure you’re aware of this-things that still need improvements. There has been issues with “unstable connections” and also a lot of players have been losing their accounts and not being able to retrieve them. MORE IMPORTANTLY, THERE ARE HACKERS who hack this game that lots of us have put money, time and effort into. This is a good game and it has the potential to be ONE OF THE BEST mobile games ever. I know that your team is doing everything to improve our experience and it’s appreciated. Hopefully these issues will be resolved permanently. Thanks! ?

liberator 65853 October 13, 2017
This is a great game, I love it. It is getting one star though, for recent server issues and the WORST customer support of any game I have ever played. emailed them with an issue with my account a WEEK ago and still heard nothing back. I posted it on their official forums and still yet again, NOTHING.

UnknownSeptember 28, 2017
I can’t seem to install the game, it keeps saying I need to have a stable connection but I actually do. What the hell is wrong with the game?It keeps stopping at 3/22 and says I should have stable connection, please help

InFamous Dawg October 9, 2017
Hello, Im having trouble when it comes to connecting to the server. its says that I need a stable connection. I tried to log in other servers such as world 2 and it successfully entered but when i tried to go back to my original server in world 1. it always say that I need a stable connection. Im hoping that you could help me with this problem…

Lelouch Lamperouge October 14, 2017
O works perfectly… basically googlr log in has a problem help please Hi imy account is in google accoubt but I cant login using google but when I tried on facebook login it

Ijoe Calpo September 30, 2017
Recent update made me reinstall game. Now im stuck at 3/22. I have a stable net. Been playing for a year now. Pls help

Jameel Kyle Ali October 15, 2017
The game remain in full screen on my Galaxy S8 I can’t even adjust it like before and it’s buggy that i can’t scroll through my stuff, the updated took out the support for full screen on the galaxy s8

John Dominic Viado October 21, 2017
It’s pretty much good for me, except for the real time raids wherein i’m always stuck in the “Waiting for other player.” phase even if i’m with NPCs only. i have stable internet though, please fix!

Jonathan Lastrilla October 5, 2017
Need help, unable to transfer to davinci, I have a screenshot of serial, when attempting it says “cannot use id”

Akasyah Palahuddin September 26, 2017
I cant play the games, yesterday i hot an update at playstore, after update icant play, it always crash, i uninstall and install again but it never works, please fix it

agung gustian September 29, 2017
i have some trouble, i cant log in after maintenance, my device xiaomi redmi note 3, all in game very addict, and i love it

Carvaughn Carson October 20, 2017
The game just erased all of my process…Im updating this a year later to say that i finally decide to redownload after being shafted outta my progress and the game for some reason starts accusing me of cheating with 3rd party apps (as if im cheating) and force closing. Bad service

Developer Davincigames Co., Ltd. June 21, 2016 Hello Captain! We’d be appreciated if you can provide us more details on the issue you’re experiencing now via our in-game customer support.
We will check the issue further after receiving the details and support you as quickly as we can. Thank you.

Anabi Eara September 27, 2017
unfortunately my acc in my google is missing. Is it maintainance? because Im not that updated. I fear that my progress will start over again

Samuel Kim Fanboy October 17, 2017
My wife bar is full to the top but it would not let me play…Pls fix this

Oscar Alvendia October 21, 2017
The game needs advertisement for people to know that this game exist.

epin mayhem October 2, 2017
Such a shame looks like a great game and wanted to try it out but like everyone is sying is true…unstable network and freeze at downloading . Devs better start doing something of ppl mightleave

Reginald Ong October 14, 2017
Always forcing it to close and can’t open it … Really need a fix

AlzaneVon Helix September 30, 2017
What happened? After update the game freezes

Norman De October 17, 2017
Used to give 5 star, my account suddenly disappeared, and I contacted support, no reply so far, very sad …

Developer Davincigames Co., Ltd. November 8, 2015 Hi Norman De,Thank you for your valuable feedback. You may wish to contact our customer support in game for further assistance. 1) Select Grand Chase Icon on the left
2) Select “CS”
3) Under remark, please state your issue encounteredWe apologize for any inconvenience caused.-Team Grand Chase M

Shane Downs October 4, 2017
Why am i not getting 3 stars on some of the levels and all of my guys are not dead

Manuel Rondael September 28, 2017
I like the game.but now icant enter the game pls fix it then I’ll giver5 star

Rio Saputra October 12, 2017
this game is really good, but i can’t use my serial. i have screenshot of it. can help?

Francis Gonzales October 12, 2017
Why i cant open it anymore