Hot Shooting Game and Easy Operate FPS,to kill enemy all, to be a winner! ! !

It’s one of the worst game’s l have ever played. The controls were terrible and it was all so confusing and when I was playing an add would pop up and I would have to restart. TO MANY ADDS. I suggest you don’t download it. 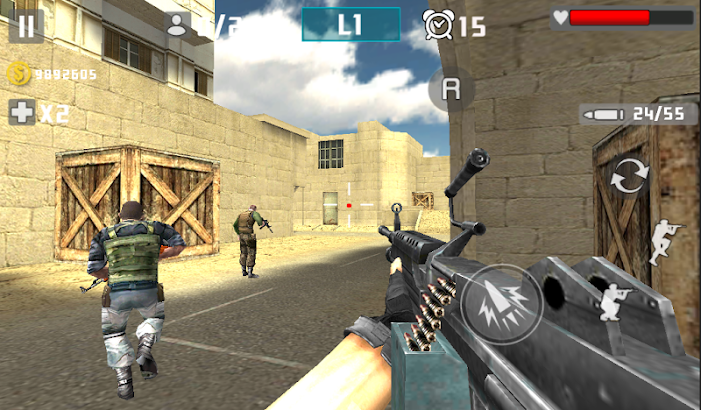 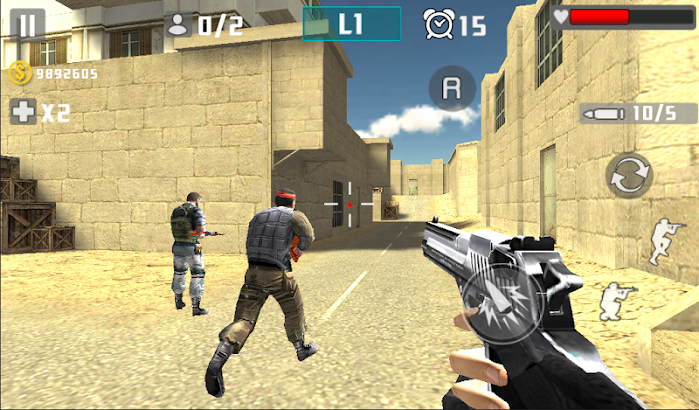 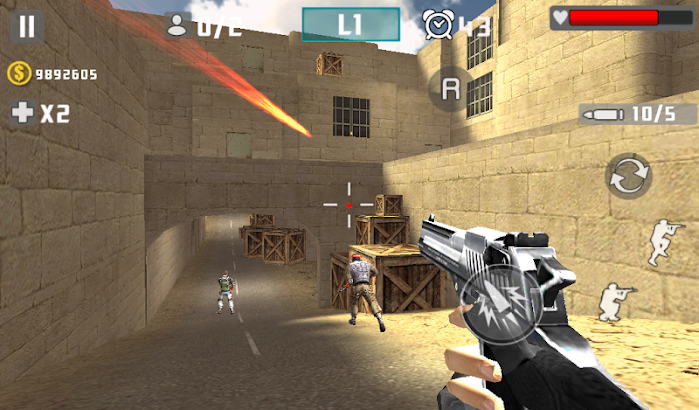 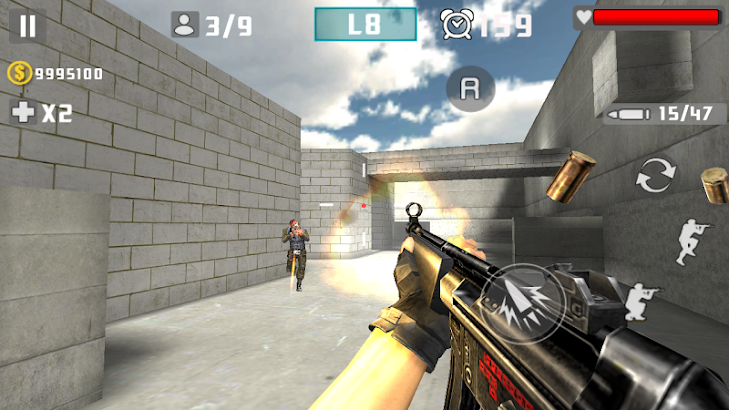 “Gun Shot Fire War” 3D FPS game. In the game you play the role of a superb shot technology elite killer. You will be faced with fully armed murderous terrorists,they are heinous, with little attention you will be killed by them. In order to complete the task and not be killed by them, you have to go all out. You can use a variety of weapons and shoot them,including pistols, rifles, machine guns,and so on. Choosing different scenes and fight with them will make the game interesting. You will feel surprised by the Perfect game play. What are you waiting for, quickly picked up arms to fight with them. Last tips,take care and show no mercy,goodluck!

***There are several game modes available to players. Time limited Mode which you have a limited time to destroy the enemy, whether those tasks fail. In the Hostage mode, you should rescue the hostages whom controlled by the terrorist. Anyway you have to pick up guns and launched a desperate struggle with the enemy.

***The game offers a variety of combat maps, such as the Desert II, Ice and Snow, the Persian Town, Dilapidated City.You will experience the fantastic fighting experience on this maps and will be shocked by realistic brilliant battle scenes.

***Arsenal will provide attractive firearms for you. Which include guns such as AK47,M4A1,M249,Deagle,Grozo,Barrett,AWP,MP5 and so on. All guns are very realistic, I believe it will give you a sense straightforward shooting experience.

***The operation of the game is very cool, the game runs smooth, realistic sound effects, exquisite effects definitely gives you a straightforward shooting experience. Head shot,Blood,Sound,Effects,GamePlay,all things are perfect. What you have to do is bore the bullet pierced into body of terrorist.

***Each shoot an enemy, you will get gold award. You can use coins to buy more sophisticated guns or other useful items. You also can comparisons with other players to see who is more powerful and stronger. Your score will be uploaded to the rank.

***Important is that the game is free, all things are free.Quickly pick up your guns and experience.

Jonathan Serfontein September 5, 2017
It’s one of the worst game’s l have ever played. The controls were terrible and it was all so confusing and when I was playing an add would pop up and I would have to restart. TO MANY ADDS. I suggest you don’t download it.

Nevaeh Hoffman May 16, 2017
I hate that in Hostile mode the hostages follow you around everywhere, they get in your way and I lost 5 levels because of the hostages. It is a good game, I like it.

Basit Qazi June 18, 2017
Its a great game. Just that the controls are a little off. I have trouble running and aiming sometimes. I just have one question. Is it possible to get more health packages? If so how do I do it? Do I need to buy more health packages?Please just get back to me on that. Otherwise great game ??

Roshan Bhandari September 16, 2017
Its a great game…..but….its toooooooo easy….Why the hell I’m not killed even after the enemies shoot me more than 30 bullets but they are killed by just 3 bullets…… Terrible…give me any game and I’ll win it….not at all challenging

UnknownJuly 2, 2017
Its a very good game to play when ever you are bord. Its actually really fun and really interesting for us. I like that it has good details they show you what you could do to win the game. I really like this game because I love gun games. Those are good reasons why I really love and downloaded this game. Thanks for the short rewiew. THANKS APP STORE

UnknownOctober 1, 2017
Uninstalled the guy is directly in front, could shake hands, and I can’t get him. Then when things look good an ad pops in and ends the game. Terrible

Jayden Dudenhoeffer August 23, 2017
This game SUCKS do not ever ever download ever You cant aim you cant SHOOT half the timeYou cant get hurt You can hardly walk So dont download itllIts just a waist of time

Ahsan BW July 3, 2017
Plz increase time limit and give us some companions which help us to kill enemies and plz increase enemies do this as soon as possible .I shall bee v thankful to you for this act and last thing which is that give more variety of guns like machine gun

Lorraine Grillo July 17, 2017
Way too many ads!! Anytime my son pressed play or any button for that matter an ad popped up.Already uninstalled after 10 minutes.

Luv Gamer Boy August 30, 2017
Great Game. Just ads pop up after every click or whenever game is ended. Graphics are also fairy good.. But according to its size, it’s Superbbb

1cegem fox July 15, 2017
The controls are bad but other than that it’s an alright game.Similar to counter strike source.I think it even uses some of the sounds

Anthony Barnett July 8, 2017
This is the type of game that could prepare someone who doesn’t understand this kind of living, or should I say life or death situation.⏳

UnknownAugust 10, 2017
I like it but it’s kind of fun like the only bad part about it is the gun shooting and the people know not the gun shooting to people’s faces they’re so ugly can you make them at least girls I’m a girl some of them girls please thank you

phillip okello March 30, 2017
The game is nice but you need to add more weapons. It would even be better if the use of hand attacks was available in this game. Thanks.

Arun Singh September 26, 2017
Very poor game. You are there only for facing bullets. Game developer don’t know that a normal human has only two thumbs.

UnknownJuly 30, 2017
I like the game but wat i hate bout it is that the terrorist are running and ur shooting no good controls pls fix that its important pls

UnknownAugust 1, 2017
This game sucks ass so bad u can’t even look around well and the guys are impossible to kill do not download.

Alvaro Pio Aguilera April 6, 2017
Wowits incredibleyou harass me to vote five stars if i dont do you wont stopharassing me before every game for the rezt yes you are great and ait it is a greatga e but let people vote for you.

Vikas Kukreja April 5, 2017
It is very bad game…….I want to give you advise please don’t download this game

Kaden Barnett June 4, 2017
I think it’s worth installing it is epic and you get told HEAD SHOT when you kill someone if it hit your aponant in the head it is 5 star ???

UnknownMay 18, 2017
It is a very good game and I liked it the controls are superb and I will everyone that they should install this app . We can enjoy nonstop action on this game I loved it thank you

Daniel Sayles March 9, 2017
Can not run the game with out spamming adds and constant harassment to rate it so I have done. Poor at best

UnknownJuly 18, 2017
I’ll don’t say so much. I want to just say that the game was not good and was not bad it was OK for time pass

UnknownMay 21, 2017
The level of difficulty is pretty much same and easy at all levels. Scope is too less. Its like we are playing same level again and again.

Debra Ragen May 22, 2017
Pretty good.I didn’t like that there’s no option to switch the movement and aim to suit all style players.Still a good one to pass time

UnknownMarch 3, 2017
I started just now so let’s see and then I will leave my comment after awhile.

Analise S June 18, 2017
The controls you need to fix them they are so bad do no recommend don’t get this game

Jagdeep Singh July 6, 2017
Nice game, but one wor
st thing is aim control and shoot control are on same side, either you can aim or you can shoot. 0 star for this, otherwise 5 star

UnknownJuly 18, 2017
This game is so boring. The controls are all over the place its just not it

Nick Fabianski June 19, 2017
What ifs me is the title. One minute, Gun Shot Fire War. The next, Gun Strike War Shoot. Not to bright of an intro.

UnknownJune 14, 2017
I think that this is a pretty good but I think that is could be better if you had to go through an army of gangsters to get to the hostages