MW3 Guns is the best weapon simulator for free!

ITS AWESOME. MY BROTHER AND I PLAY CALL OF DUTY WITH IT. I LPVE OT BECAUSE ITS A GREAT THING IF I WANT TO SPEND TIME QITH MY BROTHER.❤❤❤❤❤❤❤❤❤ 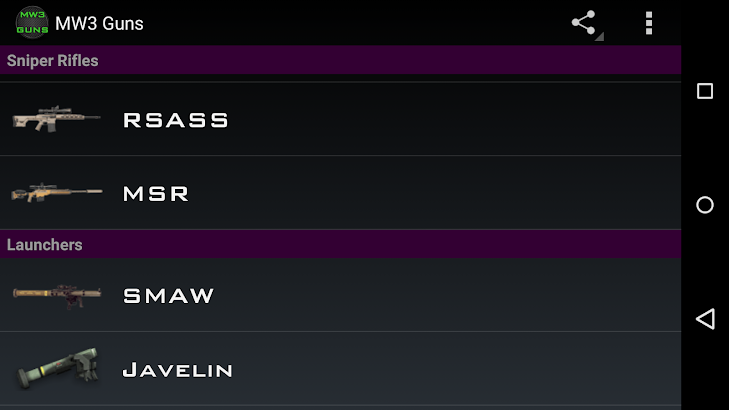 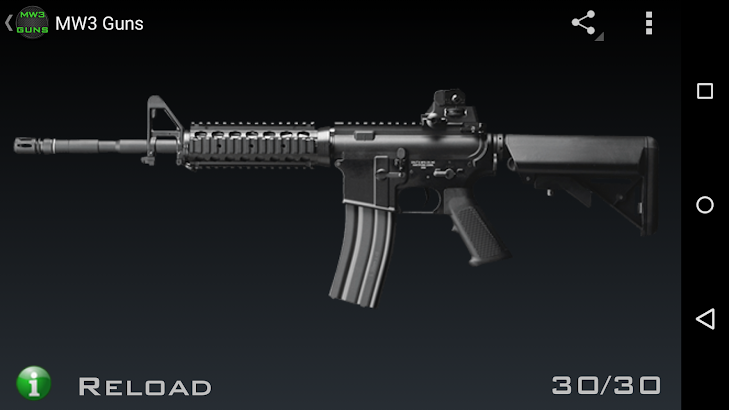 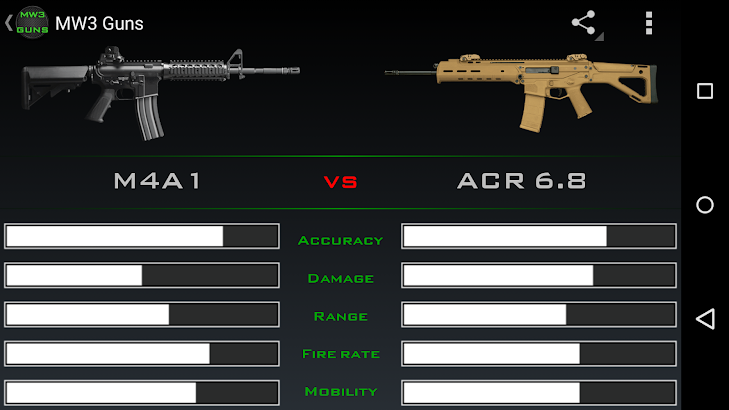 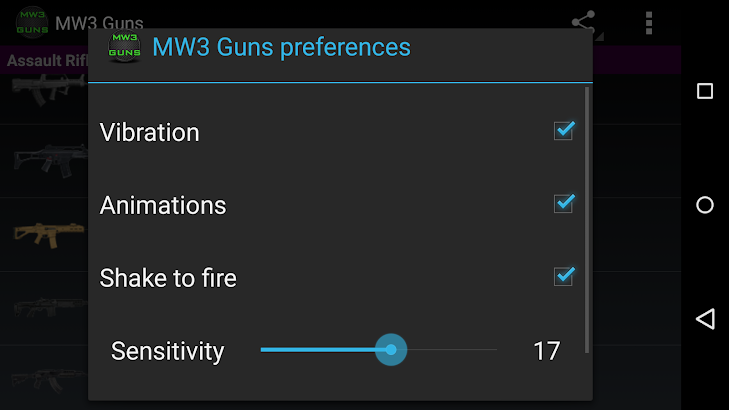 Enjoy an almost perfect simulation of all weapons with this unofficial app, hear the sounds of shooting and reloading while viewing real images of the weapons in high quality.
You can also compare the accuracy, damage, range, fire rate and mobility of all the weapons to know which is best in each situation!

If you find any bug please report it by email.

NOTE: This app is not official, we are not associated or affiliated with developer of the game or any of their partners

Scott Allen August 6, 2017
The graphics are not that good thou i love the selection but I know a app called Magnum 3.0 It’s so cool in graphics

andrea bocchi October 21, 2015
The idea is good, but there are too many problems in this application: bugs, crashes, continuous interferences of thai texts suddenly appearing and often impossible to close etc. Besides there is NO shooting range at all: it exists only in the promises of the opening page! To be a good application it needs really serious improvements.

Theresa Calvillo July 21, 2016
I sometimes use this app to prank my friends, it seemed like I was firing a actual gun! The sounds sound like Mw3. Hearing the sounds makes me think of Mw3.

Mitch Boatman June 16, 2016
I am tired of reloading. Once I can shoot all I want without stopping, INSTANT 5 stars. Love the soumds HATE the reloading. Providing an auto reload mode will make it flawless.

Ibrahim Ahmed July 7, 2016
This is great for people who wanna snip and see the best wep.The people who think this is bad … Well stop campin’ ! This app’s for good players and prestiger’s like me not campers…

Charlie Dicanio December 9, 2016
The ads get in the way and you can’t even fire the guns anymore. Its a rip to remove the ads and the ads ruined what used to be a good app

Nahian Nishargo June 28, 2015
I loved this sounds.I also tried it with speakers . Its really like guns.Everybody must rate this game.I loved it.There are many guns.I loved the launchers it sounds awesome.Cool app!!

DOSEof STEVEN May 25, 2015
VERY AWESOME??, justin McBride talk [email protected]!& all u want but u will never be loved by anyone

Kenneth Castanera April 20, 2015
Could use some grenades or bombs course its just a little fun if there’s no bombs

Ben Hilker March 6, 2017
WAY TOO MANY ADDS, PLUS NO FIRING RANGE, CONSTANT CRASHES. GO BACK TO JAFFE PROGRAM

Jennifer Gray April 3, 2015
I want to have cool gun noises except iGun Pro app kept glitching. I love this one!!!

Keong Lee October 1, 2015
These guns that I ever seen in game PS3 and Xbox. This guns, such as Call of Duty, and Modern Warfare.

Mason Harrison July 9, 2016
I love this app but can u please make mw2 guns that is my favorite game and can u make a mw2 version of this

The Massacro March 29, 2015
SHUT YOUR TRAP justin mcbrideI have a ps3 and modern warfare 3

Riley Haines July 31, 2015
Tried i t on my dad and it didn’t work to scare him but awsome sounds

Angelina Erimia July 24, 2015
I love playing cod so I Mack my on missions with these guns and I have PS3 on lots of cod so Justin stuf

Eric Cartman July 25, 2015
No shooting range or auto reload but it does have infinite ammo and the guns are cool

Jorge GRIFFIN August 25, 2016
Who ever Say’s too many adds all you have too do is have no WiFi like no internet.use someone else internet.That goes for any else game too and eveyone.

justin mcbride February 22, 2015
Play this but don’t play modern warfare 3 cuz its the worst and ps3 is the worst

BioActiveScout 629 December 3, 2016
The stats, sounds and magazine sizes are all off

Hayden Shiell January 20, 2016
I loved it because I like to do suicide trolls and this app help me do that

HemiPrime June 11, 2016
I can’t blevit this game is out soo cool it’s like the same what CALL OF DUTY GHOSTS SOO EPIC
Tags
GPR Apps