I’m fed up with the feathers and ads this is the stinker that asking you purchase the feathers to play… like the arcade games ask you the coins to start over again. 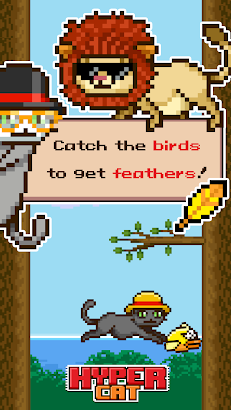 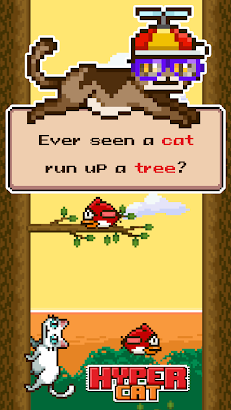 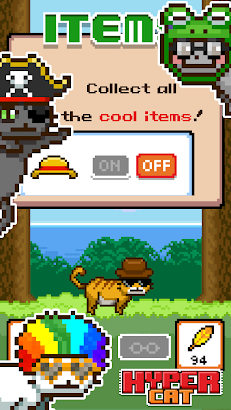 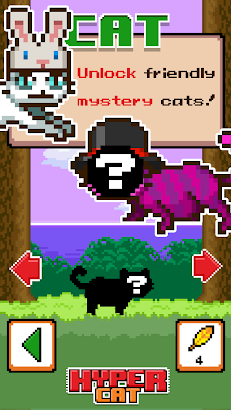 Meowing kitten friends! Have you ever seen a cat run up a tree? It’s the craziest Hyper Cat!

Hyper cat is the skillful bird catcher. Tail arch and puff out. Come to chase and jump to bash into the birds, collect feathers to unlock new items. Catch them with your paw the stoked birds are your prey!

Join the cutest cats on the Play Store and test your reflex and endurance skills to its limits. It’s an exciting fun action game with simple 1 touch control and cool retro 8bit graphics. It’s so simple but challenging and rewarding! Super fun!

So what are you waiting for? Get Hyper Cat for FREE for your phone or tablet! A must have game for all cat lovers or fungame seekers! Click the DOWNLOAD button now!

FEATURES:
– Simple 1 tap touch control.
– Collect feathers to unlock new items.
– Customize your cat with cool hats and glasses.
– Unlockable mystery cats like Cheshire and Nyan.
– Jump and catch the birds like a ninja! Flappy wings and angry alike.
– Backup your progress on Cloud Save.
– Earn achievements and compete with your friends using Google Play Games.
– FREE to download. Future updates are FREE!
– Compatible with retina devices.
– Share your score on Twitter twit and Facebook.
– Addictive but challenging and rewarding gameplay.
– Tablets compatible.
– Cool retro 8bit graphics.
– Challenging hard, rewarding and super fun.
– A must have game for all coolcat katt catlovers.

Hyper Cat is free to play but in-game shop items may require payment.
Advertising is disabled if you make any purchase.

About Cycleplay game:
We aim to make simple to play and fun games for everyone to enjoy.
Check out our other top-notch game Mad Dragon & Pet Paradise Story!

Got a suggestions? We would love to hear from you! You can reach us at support at:
[email protected]

Michika Maseda Moore February 25, 2016
this is the stinker that asking you purchase the feathers to play… like the arcade games ask you the coins to start over again.

Ginger Cat October 21, 2017
Super duper born basically it’s Flappy Bird with a cat and also that the press to hop twigs mean Captain easily break a twig with its paw and its weight but it’s super duper boring I would not recommend this to anybody meaning cuz it’s born please don’t take any offense I love cats

Colleen Nolan January 5, 2015
I have zombie cat and snowy, I have 106 feathers and am saving for nyan. I cant believe nyan catcost 500 fethers in the game===== that’s what i said before I got her, now I have her and all she is is a gray cat with blush. What a fether rip of. It took me 2 days to get her and that’s what she is.wow. also the cat that’s 30 feathers is a better and cuter cat!

Moomin74 June 5, 2015
Trying tounlock all the cats is fun. Game is hard and sometimes freezes forcing me to restart, but it is surprisingly addictive!

Adam Addi February 6, 2015
I really love this game and i hope more cat’s will come that are more challenging to get. Very simple and responsive game.

Eva Jensen June 8, 2015
I’ve Ben getting really bird and then this popes up amszing

Austin Sojka February 16, 2015
Fairly original and fun gameplay. Simple and easy to pick up and play. Thanks.

Brenika Owens February 3, 2015
Cats are fun, especially on games like these!

M Green January 1, 2015
Very fun.Enjoyed playing it so much

He Review Me October 16, 2014
Question. Why do some of you dish out 4 to 5 stars to games you either can’t play or hate? That’s rhetorical, by the way, I know the answer: You’re brain dead.

Craig Grummitt October 13, 2014
Such a cool game, reminded me of alley cat from the early 90s. Addictive game play too!

Steven Skula October 16, 2014
After install it asked to update town wanted me to install a dating app

Jim He October 22, 2014
Very fun. Not easy to get high score. The graphic may be designed better.

Andrei Barbu October 22, 2014
Loading is a bit slow on my phone, but it’s a great game overall.

TimandBrooke Bent October 22, 2014
Fun endless runner with flappy birds thrown in. I Like the pixel artand the music

Trevor Hailey October 14, 2014
This game is a funny and cute endless runner

Jean-Philippe FONG October 22, 2014
I enjoy the graphics and the gameplay

Archeyus Rexus October 6, 2014
I hope this becomes one of the top 10 games and also consider to apply more content for this game. I really love this game and hope more cats will come that are more challenging to get. If you haven’t tried this game yet, try it now! First time you play it, the more awesome and addicting this game will get. I’m not meaning that its addictive in a bad way but in a good way.

undefined bond October 8, 2014
I like difficult games but the play and replay button are very hard to notice