A jumping game with a brand new level every day.

The game was fun, I had a blast playing it last year. I just installed it on my new phone and it won’t open at all. I wish you can fix this! 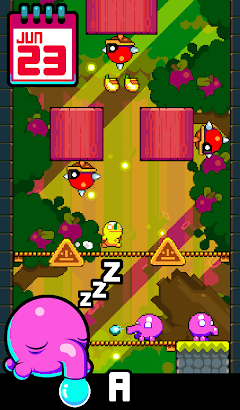 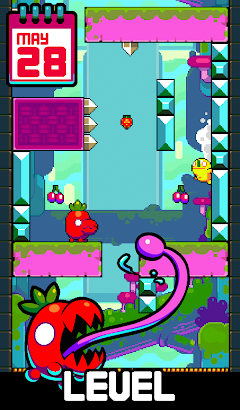 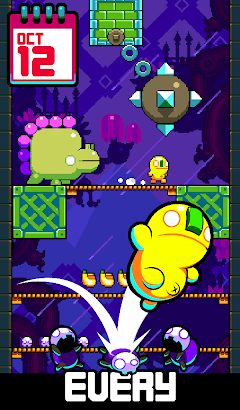 Leap Day is a fast paced action platformer with a brand new level every day!
…no really EVERY DAY!
…like until the END OF TIME!

• Simple one touch gameplay in portrait orientation. A perfect platformer on the go!
• A colourful and stunning pixel art world. Retro nostalgia is a go!
• A real labour of love from the whole Nitrome team!

-Important information-
This game contains third party advertising and cross promotion for other nitrome games, both which can be removed via a one time In App Purchase.

Prepare yourself for the Nitrome invasion as 10 of our most iconic characters have decided to add themselves to Leap Days new prize system!
-Unlock 10 new playable characters in Leap Day each from a different Nitrome game!
-30 new selfie poses to unlock and show of your spoils to your friends!
-The prize system has been overhauled to be truly random… you never know what you’re going to get next!
-This update addresses bugs that occurred in the previous update to some users

Frosty Shadowz October 23, 2017
The game was fun, I had a blast playing it last year. I just installed it on my new phone and it won’t open at all. I wish you can fix this!

TheCubeHamste r October 24, 2017
The game was very fun until the recent overhauls. Loaded fast on Pixel before, but it now stays on the red splash screen without loading at all.

Kevin Gawlik October 17, 2017
Great game, been playing it for awhile. The one issue I have is that ever since I got the paid version of the game, the loadup has had really bad freezing issues that require restarts to get it to load. Now I am unable to load the game at all, please fix nitrome

Spade Z October 22, 2017
it’s pretty cool. but my prize meter is glitched and I can’t get any prizes

Developer Nitrome October 23, 2017 Hi Spade Z, have you tried clicking on the prize icon at the end of the bar or could you let us know more details of what is happening? We are looking to make this more obvious in the future.

Christy Smith October 23, 2017
I’ve been playing this game for a year and a half and love the game itself but recently the ads have gotten really annoying, to the point where I almost want to quit playing.

firefoxgaming October 16, 2017
It doesn’t open 80% of the time and it crashes all the time

Bjarki Öfjörð October 17, 2017
New update made it stop on the splash screen

El Avocado October 19, 2017
There is too many adsplease reduce the amount of ads

Developer Nitrome October 23, 2017 Hi El Avocado, if you buy premium you get a no-Ad experience, hopefully this will help you enjoy the game

Stephano Lopez October 21, 2017
Some of the levels are impossible

Developer Nitrome October 23, 2017 Hi Stephano, we are sorry you are finding the game tough, we have made it difficult and it is not for every one but all levels can be completed, they may just be very hard. Stick with it, we believe in you!

Developer Nitrome October 23, 2017 Hi Claudia, have you tried updating your Android OS to a newer version?

Tony Wang October 8, 2017
Used to be my all time supporter for this addictive game and must play everyday without a chance to skip. Continue this habit since day 1 tilt now. But due to recent update I decided to stop playing
this as there are not 1 but 2 unskippable ads keep pop up while I enjoy my game. I know you guys are doing hard to look for some sponsors for your game but please please do take care of us and do not spoil the enjoyment of this great game. This is really amistake to force us click/see your ads. Until you guys do something for this to revert back the changes else I believe you will be loosing lot of your supporters at least I will be one of them.

Jack Philips October 3, 2017
Ads get in the way, now they have chosen to adopt unskippable ads with videos or those interactive games, and they now shove banners in your face to buy their overpriced escape from intrusive ads. 5 bucks is pretty steep for a game I can only play once a day to progress.

Máté Róbert Mészáros October 10, 2017
Nice game, but buggy: instead of new characters I get duplicate selfies. This is problem when the reward system is based on getting access new graphical content. I will give 2 additional stars for fixing this issue. My last star will be for the controls: they are sluggish at times (laggy). In a game where timing the jumps is the only mechanic, this is unfair.

Jayden Evetts October 5, 2017
So great, I recommend paying for ad free, it’s worth it especially at half price. Really challenging and simple at the same time, and makes you rage really hard sometimes. I love the unique idea of having a level everyday, keeps you coming back.

Edward October 13, 2017
Hi, there is a bug where it insta kill the character. After the character died and respawn, pressing purple button to spawn limited time purple platform insta killed the character no matter what. I’m using Samsung Galaxy s7 edge if it helps ?

Zachary Lane October 6, 2017
Got all the all stars on October 7th 2017! Max at lvl 182 I think. It just says the word “maximum”. Do I hold the 100% speedrun record for Leap day??Thanks for all the new characters Nitrome. Sir Gylbard and Tucker are the best.

Jason Bourne October 5, 2017
Why does there have to be selfies because i work so freaking hard to get a new character just to get ripped off. Fix this then i will give 5 stars

Benjamin wall October 5, 2017
Oh my lord – yes I know it’s a free-to-play game but receiving an ad every five or so tries, when you reach a hard part meaning you dies very quickly, is very annoying. I should not have to pay to maintain my enjoyment of this game

Steve Ferro October 6, 2017
Used to love this game, but the developers clearly value $$ from ads more than getting rid of the worsening lagging. The more intrusive JUNK you add, the more it lags. Not fun anymore! Done with this developer.

Joël Knufman October 15, 2017
Too many ads that can be in the way. You can die at points you shouldn’t be able to die at which is very frustrating. After 3 levels it’s more so a frustrating game than a fun one.

Geek Squid October 7, 2017
This game was almost perfect in my opinion. It wasn’t too complicated, but it still provides a challenge. It got new levels constantly, and if you ever got stuck on one you could just wait a day for a new level to try. In the meantime you could backtrack and try levels you missed the first time around. Additions of new enenies, level themes, and hazards are spaced far enough apart to avoid being overwhelming but still close enough to keep things from getting stale for very long. Unfortunately, after the most recent update I have been unable to launch Leap Day. I’d highly recommend the game to anybody who can currently run it, and I’d not have hesitated to give it 5 stars if I were able to launch it.

Tomasz Luckos October 14, 2017
The levels are easy until you get to an impossible obstacle. Just frustrating and not challenging. Deinstalled

Samuel Bustillos October 14, 2017
Yeah so I used to play this game a while back and now I have none of my thing my profile was backed up and I’m level 18 as well as the fact that I perfectly complete a level and it gives me no “xp” at all

David Birkett October 8, 2017
Used to be a good game now with all of the adds and the lags and the prioritization of sponcered characters make me dislike it

Grimly ydoC October 7, 2017
I like everything but how they scrap old levels and put a lazer up ur ass and call it “harder”

Amirul Hussein October 4, 2017
I cant get my old character but it continues on with all my character having selfies instead of having the character back.

UnknownOctober 12, 2017
It lagged so I purposely died over and over

A internet meme October 15, 2017
Love it but I downloaded your other apps and I don’t know how to get the characters from those…games

Jason Kloepping October 8, 2017
I thought the prizes were supposed to be random I have got the guy with the briefcase like 5 times in a row

Joy Melhem October 5, 2017
Used to like this game before the unskippable ads

That ugly miner October 10, 2017
New level every day for pixels it has great character and enemys