Can’t even play the game because it thinked I “hacked” it. I even try deleting some hack apps, but to no avail. I didn’t even try to hack the game in the first place, I guess if the apps are even downloaded on my phone it won’t let me. Unless if it’s talking about KingRoot, which is JUST A ROOT APP. Awful just awful… 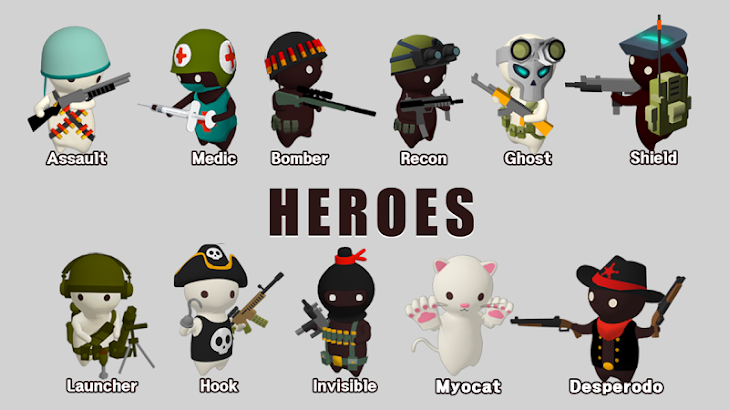 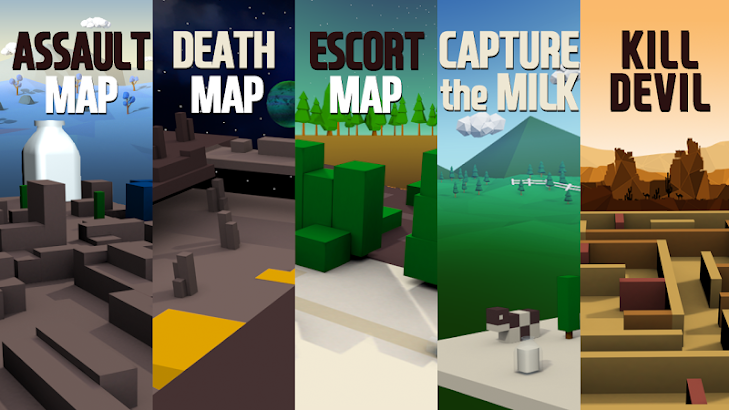 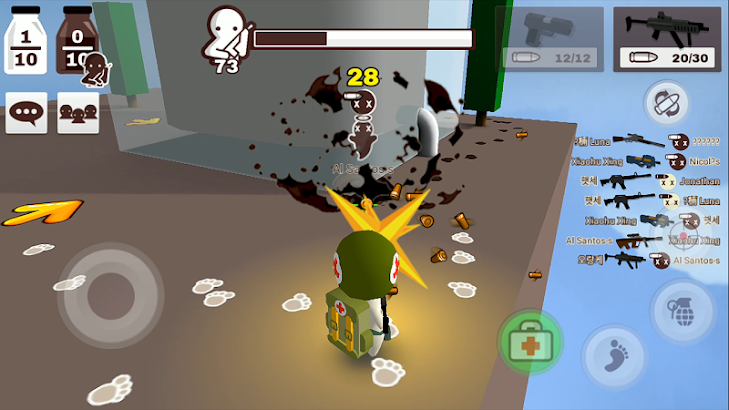 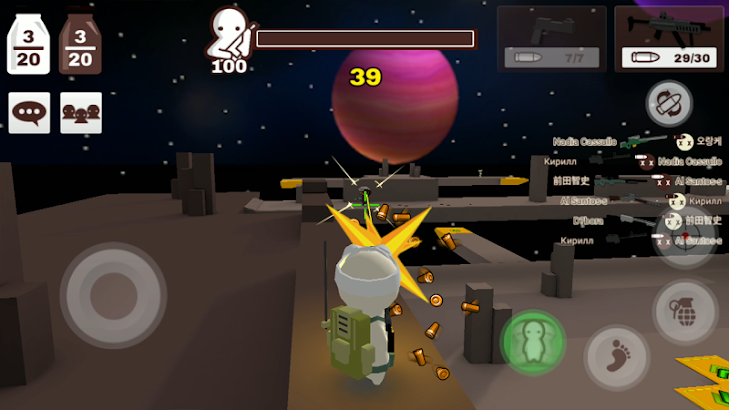 [MilkChoco] is a 4 to 4 team shooting game.
You can play in the various maps such as ‘Assault’, ‘Deathmatch’, ‘Escort’ and ETC with many heroes.
Each hero can be raised individually, they also have own ‘ranking’, ‘weapons’ and ‘skill’.
There are no cash weapons and heroes. And you can get even gold bonuses via medals and victories.
Therefore, all players in the game are equal.

==== Notice ====
1. In-game guide, please use the book button on the top left corner.
2. Login will be a Google account. Even if you change your mobile phone, you can log in with the same account and play with your existing records.
3. We have reviewed all the important reviews you have left, and have incorporated them into your updates. We will be a developer who really listens. thank you.
4. IF you use Hack or Patcher, you can be blocked permanently.

– If you leave the game during you died, add a rule that you can not enter other matches for 20 seconds.
– Bug Fix: when I throw the bomb to our snail, enemies’ snail gets the damage.
– Bug Fix: the bomb damage which is thrown by the hero doesn’t work after the hero died.
– Bug Fix: the ghost teleport into the object during the jumping by the jump panel.
– Bug Fix: the Hook skill is canceled when he uses the skill locating the higher position than the target.

An Alias October 22, 2017
Can’t even play the game because it thinked I “hacked” it. I even try deleting some hack apps, but to no avail. I didn’t even try to hack the game in the first place, I guess if the apps are even downloaded on my phone it won’t let me. Unless if it’s talking about KingRoot, which is JUST A ROOT APP. Awful just awful…

Developer GameParadiso October 23, 2017 Please e-mail us and we will guide you through the solution.
[email protected]

glitches mod October 9, 2017
The game is getting too much of glitches after update. Slow function make game so annoying. I died by angel bomb on capture the milk. How the fk is that possible? I need the game to be fixed.Ninja can be killed even if invisible , are you providing the hack version of it? I am a coder ,i dont speak till there is no problem but after update it start sucking my brain.

gamer October 16, 2017
All of the guns were too expensive and took ages to get to. Pls add an update where the guns are cheaper and I might give a higher rating. Also if you don’t want to make the guns cheaper then make the amount of money that you can win larger

Gaig Rigsby October 14, 2017
The best game ever made but pls fix the player lag. The player lag is when the player you are trying to kill lags out and freezes and after 10 seconds of that the player is invincible for about 4 seconds and kills you instead.

Brian Germann October 3, 2017
Love the game. The 20 sec rule is irritating when have to restart because the game dropped me, which happens frequently. Wish the game would match people with similar lag, nothing is worse than playing with someone who moves like superman because they have a better connection.

Gatling Hawk September 12, 2017
OK, first of all, I LOVE THIS GAME. I want more content please. like more gamemodes preferably. also no controle-mouse-keyboard support :/ but overall a good 9.5/10

Marll Flores September 21, 2017
I always love the game… and the new update…Some few suggestion I recomending the weapon system of the gameto be change.. i wish one hero can borrow another weapon from another hero..sorry for my bad english..

Remington Wright October 12, 2017
I like the game very much but it took my actual hard earned money… $10 to be exact. I have sent a refund request and haven’t heard anything back yet. Other than that I enjoy the game.

Dreamz 954 October 11, 2017
At first I didn’t even know what was happening to my screen but once I played I got into it the only thing I think k is not good about this game is the amount of content it has such a small amount of things the players can do but beside that there is nothing

Irisudo KGW October 10, 2017
Its good But pls there are so many hackers I cant stand it. If i respawned they just One hit kill

Developer GameParadiso June 7, 2017 we applied the new security solution for rooting issues. Update and run the game again, then you can play now.
If you can play without any trouble, please adjust the game review points.

Jer October 16, 2017
Is it just me or there is no room that I can join? I hope they make a room to join because I don’t like the maze and the large map one which is the best suited for sniper. They should really make a “Make a Room” option so that the other players have an option not just the “Quick Fight/Random Map” thing. The game is good but I hove they consider what I’m saying right here, if you do this I will definitely rate this game a 5stars.Edit: And also add some waiting time for those who disconnects, its such a waste killing a lot and then you get dc and cant get back to the game. I hope u guys are not like the other devs or mods who doesnt care about players suggestion. Thats all and goodluck.

Spongy Jay September 27, 2017
Would be great to have damage falloff to prevent being shot from long distances with short distance weapons. It would also be great to have the auto-fire crutch removed.

փͲΛβΣϪփYT September 16, 2017
Awesome no hacker yes because if you use hacks or patcher like lucky patcher will permanently blocked best devs ever rather than other game can hack

Bread Cat September 28, 2017
Great game and keep up the good work. I’m cheering you on, but please make an offline mode when you fight bots, please?

Johnny gaming October 15, 2017
Great time killer, really fun highly recommended to every one and can you please hurry up on the update, and thanks ? and on the next update can you make it for offline use (fighting bots) and can you make the game run on slow Internet because I lag to much please fix it ?

subham raj September 16, 2017
Game is good but when the myocat runs it sometimes doesn’t harms the player on the way and sometimes the damage of the weapons and the price changes automatically please fix it

claire desta October 22, 2017
Please fix the glitches. I cant hit anyone yet they can kill me . i mean i love this game but it glitches a lot

Keith ivan Masaganda October 22, 2017
SUCH A TRASH IT SAYS THAT I WAS HACKING BUT ITS WASNT =/ JUNK!

Developer GameParadiso October 23, 2017 Please e-mail us and we will guide you through the solution.
[email protected]

Prasenjit Raj October 19, 2017
What the hell is it . I start the game and it is not even a second and the game show a error code and crashes .

jimmy dejesus September 19, 2017
It has a bug where everyone walks off the cliff and they die and nothing happens later plz fix

Brian Andruskiewicz September 28, 2017
It’s actually really good for such a small game. Things to improve on, probably that there are too few maps, we want faster gold collection. Good idea for clans

Haziq Zainul September 16, 2017
Thank you forthe new map.I have purchase 800 diamond but I don’n get it.I’m just kidding.I hope you can give me free diamond.

UnknownSeptember 15, 2017
Its working but its always reminding me to like their page after that it will not work

Splash-_- God September 29, 2017
Can you add a festure where you can sell your items in the game? I really need that. But overall the game I super addictive.

ellyson martinez October 14, 2017
If each hero had there own type of weapon I know it’s a lot to ask but the game would have a little more variety and it will be more interesting and make the ability clock faster over all really cute and is amazing

joe black October 15, 2017
Add more maps. There are 5 maps thats not enough.kill devil keeps glitching when i get a kill it doesnt give my team a point.hope dis is everybodys problem.

Zhake Vlogs and gaming October 19, 2017
I have an idea for a character, you should add a female now I know the character doesn’t have genders but like make a female her special could be she can flip for 5 seconds and doge bullets. Also 5 stars

Sean Bob September 20, 2017
Hey every time i play the game it says im using a hack tool but im not pls fix it because i wanna play this game it looks so cool

Rowan Pizzino October 22, 2017
Great game! It would be great if this was released for iOS too, and a few more maps would be awesome (like maybe more maps for the already existing game modes?) Love how this isn’t a money grabber, and it’s not even remotely p2w! Thanks!

VLazor 1910 October 14, 2017
it keeps saying i have illegal program.I did rooted my phone but i dont have apps or program like freedom and lucky patcher.

Taufik Geymer September 16, 2017
Lost one star because has lot of crash and game froze.

Ammar Filahy October 6, 2017
It’s good game but need more gameplay like battle Royal and add new maps and skins and who Agree With me

THE GAMINGBURGER September 28, 2017
Haven’t even played yet already like it

[PNS] play no sound October 20, 2017
I think you should add a offline mode because sometime when I go outside I don’t have Internet

Maira Harris September 24, 2017
OMG this game is so great… what would be cool is if you could make squads that your friends can join in, and if it had a zombies mode