I’ve had this game for a few years now, maybe since 2014/2015 I’ve never deleted it. it’s a great game and very addictive, simple but can be challenging on highest difficulties. I wish more free games would be like this. Also, no internet needed so I can use it anywhere 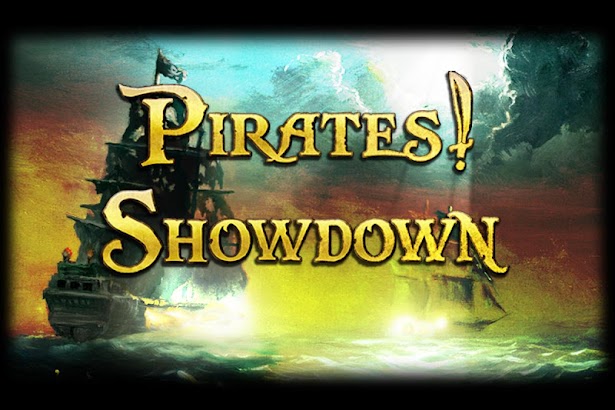 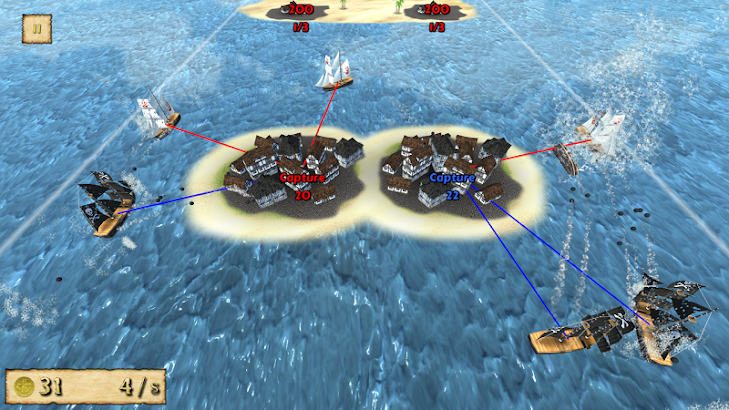 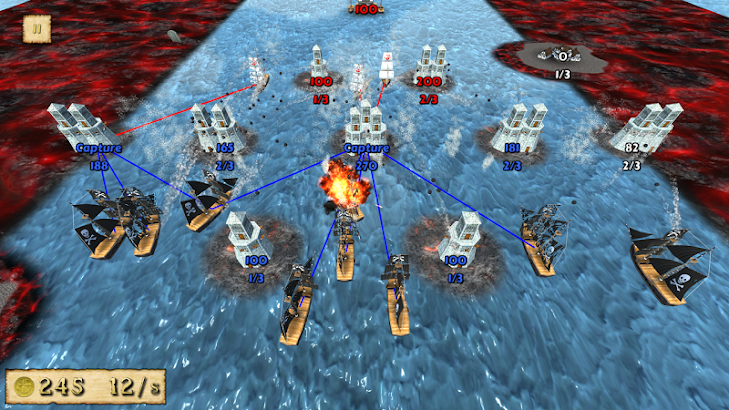 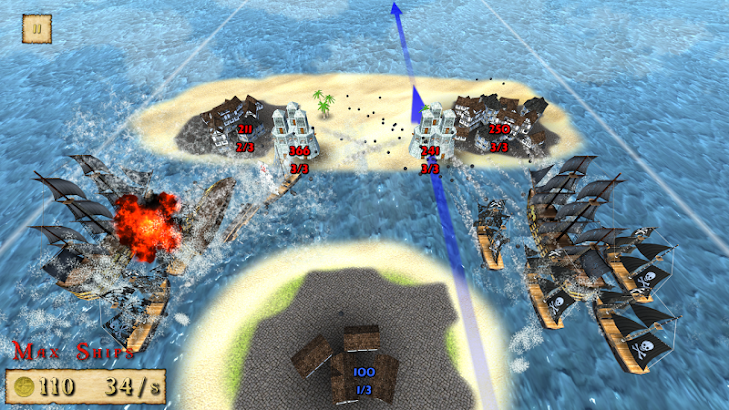 This is a full version of the hit game Pirates! Showdown made completely free!!

“Seriously, this is a very cool game!”
AndroidGameplay4You

Face off against the fearsome Red Hand privateers in thrilling head-to-head pirate battles on the high sea! Capture towns and other structures to strengthen your defense and increase your gold supply. Capture your enemy’s base to win, but make sure you are also defending your own base! 75 campaign levels plus randomly generated maps in skirmish mode!

STREAMLINED RTS DESIGNED FOR MOBILES!
Fast paced gameplay with RTS and defense tactics without heavy resource management or the need to micro-manage units.

WEIGH ANCHOR!
Command your fleet of pirate ships as you send them to intercept the enemy pirates or lay siege to land targets. Send an armada of Brigantines or save your gold for a massive Ship of the Line!

CAPTURE!
Towns, guard towers, shipyards, lighthouses, mystical obelisks, and more can all be captured. Structures all have a unique purpose and will supply you with gold, attack your enemy, buff up you ships, allow you to launch more ships, etc.

STRATEGY!
Will you aggressively capture towns to loot their gold or invest in the towns you have to increase their gold production? Wage a purely pirate ship battle or strengthen your defenses with upgraded guard towers? Find the right RTS strategy to beat each level.

75 UNIQUE LEVELS IN FOUR WORLDS!
Combat the enemy in the tropical Caribbean then follow them into Hades in the River Styx world. And the Open Sea and Chaos Ocean worlds have the largest levels of all

ADJUSTABLE AI DIFFICULTY!
Set the game to be as easy or as difficult as you want. Set the AI to adjust to your skill or set it to play a completely even/fair match every time. Pirates of all strategy skill levels should be satisfied

CONTROL TIME SPEED!
At any time you can speed up or slow down time to play at your own pace. Allow yourself more time to prepare your strategy or speed up your opponent’s demise!

Lolmqster Android2 October 22, 2017
I’ve had this game for a few years now, maybe since 2014/2015 I’ve never deleted it. it’s a great game and very addictive, simple but can be challenging on highest difficulties. I wish more free games would be like this. Also, no internet needed so I can use it anywhere

Van Santen Media September 15, 2017
Very nice game, simple controls and some tactic to it. My only problem is the very hard mode. It seems the enemy gains an X amount in percentage extra gold per second over the player. So even when you should have the upper hand you don’t and will get overrun, in a game where resources win you the game this is contradictory Imo. I thought the modes were based on decision making only ! Other than that great game. It would be nice if there could be stated what the different difficulty’s envelop.

Steve Gallant June 27, 2017
Cool game play. Instructions were sparse. Should be a page to go to in case you forget something from the tutorial. I wish you could at least designate a target for the ships to attack, if I can’t control ships themselves.

Rudy Troxel July 7, 2017
Not what I initially expected or was looking for but very enjoyable. The only thing I wish I could do is set priority targets for the ships rather than letting them always decide for themselves.

Catherine Chapman May 10, 2017
It’s so much fun I have trouble putting my phone down! I love how many different difficulty levels there are too. Arrrg

jdthenomad June 22, 2017
Great concept. This game WILL beat you if you don’t adjust strategies. Only thing I’d like to see is powerups

Vedran C June 10, 2017
Add more levels,and some maps on very hard are imposible to run off.You give the game too much advantage.

Owen Evans March 29, 2017
Probably the best game I’ve evred play just could you add more boats but apart from that thanks for the great game ☺?

quinby9681 April 10, 2017
This game wasn’t what I thought… I was expecting exploration and a multi dimensional experience. It focuses solely on strategy and that’s pretty cool too…

Daniel Emmons September 29, 2017
This was a good game… was… adds ruining the game so much I’m uninstalling right now!

Michael Schwager September 22, 2017
Simple game but a great little time waster. I love to jump in now and again when I feel like beating up a computer.

Deborah Washington August 26, 2017
I really liked it in the beginning but some of these games looks so one sided till it ain’t fun no more.

john bush April 5, 2017
I think they should add an online game mood … And customize able ships and town

Shawn Gist April 29, 2017
Love it! Actually addicted. My favorite game and my favorite pirate game of all time.

Skellington July 13, 2017
I play this game,complete it and then delete it and redownload it just to start over and play again. This is the fifth time I’ve downloaded it and completed it.

Annie Mangru May 6, 2017
AwesomeI just love this game Seriously amazing.. Although I wouldprefer some weapons

David Jenkins September 15, 2017
This has been my go to game for Android since 2014 maybe before.. Love this game, can’t be without it. Wish they would expand and add more levels.

UnknownOctober 20, 2017
I think it’s worth playing, so awesome and fun to play ! I love pirate games and I love pirates of the Caribbean starring Johnny Depp asCaptain Jack Sparrow “the best ” .

UnknownJuly 27, 2017
I wish i could take prisoners and torture them

The Vanquisher April 29, 2017
This is a great game that I spent hours on. One of the best.

UnknownJuly 21, 2017
I spend way too much time on this great game. A great throwback to early games which i love! Thank you !!

LuckFeed LuckFeed July 10, 2017
Quite literally one of the best games ever made.

Michael Snyder August 6, 2017
Very good game…especially because it is completely free. Can play game offline as well. Lots and lots of levels.