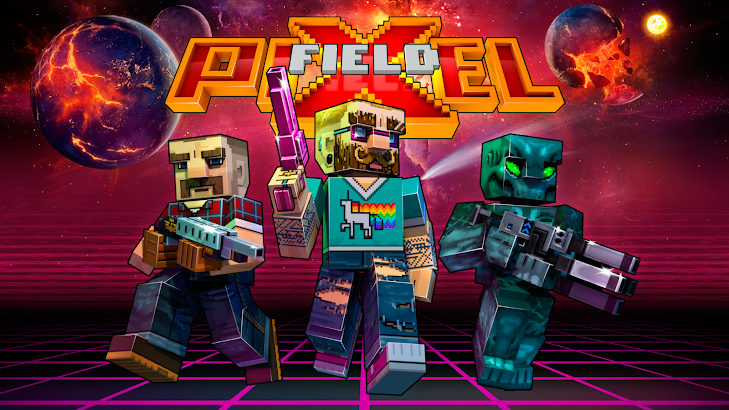 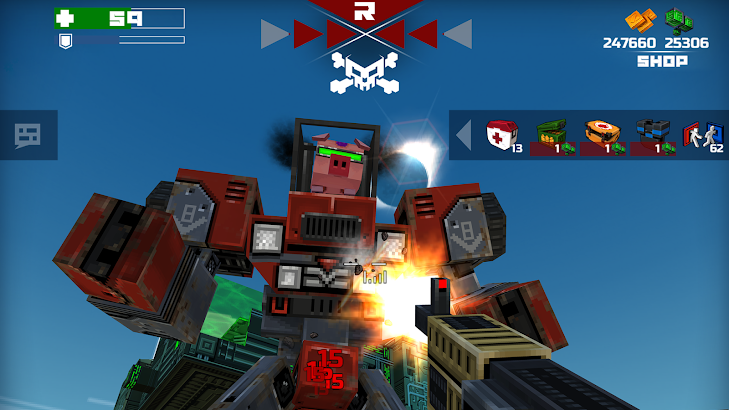 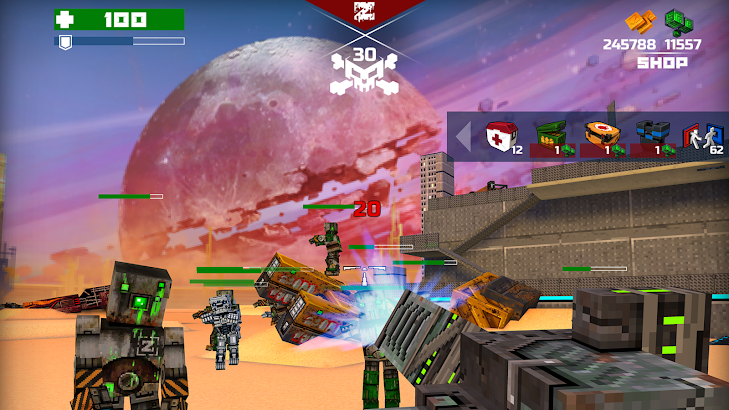 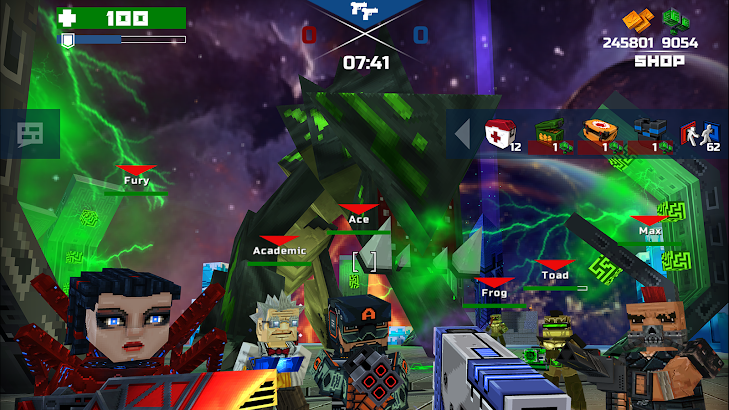 Fight artfully and bravely in a new whirlwind multiplayer online 3D shooter.
Easy-to-use controls and dynamic gameplay with both classical and unique online modes.
Choose your appearance and the right gun out of a multitude of options and head into battle!

COMPETE WITH OTHER PLAYERS online in varied game modes.

CATCH PIGS and carry them to the farm in online Pigpocalypse mode.

FIGHT THE BOSS AND COLLECT RESOURCES in cooperative Raid mode.

USE YOUR RESOURCES to level up your weapons.

DESTROY THE ENEMY BASE in online Storm mode.

USE BOOSTERS to fundamentally change the situation on the battlefield. Jump higher, run faster, and fight harder.

ASSEMBLE YOUR OWN ARMORY and change tactics on the fly.

SHARPEN YOUR SKILLS by fighting one-on-one without an internet connection.

LilMilkDud October 21, 2017
Level balance is needed hard to do anything if you just started playing then the top player kills you in one shot its impossible to do anything

Jair Castor October 24, 2017
This game is the best i can use my own skins plus they have the new ops mode which is sooo cool so it would be cool if u can add morw cool maps

Havoc PlayZ September 15, 2017
Better than pixel gun!!! Can u guys add:- Skin editor Sensor mines Beartrap Powerups Kill streaks Etc etc You guy would get NOT a million but a ZILLION of downloads One question….. Can u say me the app u used to make this good stuff?? I wanna make a game

Developer Epic Stars September 28, 2017 Some of these will be actually added to future versions of Pixelfield. Thank you for your beautiful ideas!

UnknownSeptember 21, 2017
I really like the game and it’s very fun but in the new gamemode there is so much lag.Once I was on the soldiers team and I activated the bomb and we held the bomb till last seconds and then I thought I won but for some reason they got extra time and we lost

Developer Epic Stars September 28, 2017 We’re sorry for the inconvenience. All issues will be fixed in the upcoming bugfix update

Jose Ochoa October 6, 2017
It is not bad but pixel gun is way better

Imanol Acosta September 9, 2017
You should be able to use the shield on SWAT guy and make a campaign and make mini figures

Koaermine August 5, 2017
This game is truly amazing but im still getting used to the controls and its hard because i usualy play with bigger buttons. So an improvment that i would love to see is where you could customize your layout (for example if i wanted to put the jump button on the left) because i want to be able to do things more quickly and also where you could make the buttons bigger and smaller

Dr. Wing Ding Gaster July 2, 2017
I’m lvl 23 right now and i think the game is amazing, but there are some improvements you can make, especially in the raid game mode.I think there should be a thing in raids where the boss can drop chest keys so people stay to kill the boss instead of just leaving. But the higher level key, the lower drop rate, so for example the old pirate key drops 30% of the time while the mysterious world key drops 5% of the time.Also with the raid game mode the boss loot should be given equally to each member who did damage to the boss as some people just stay close to the boss and steal the loo
t.

Developer Epic Stars May 3, 2017 That’s an interesting idea, thank you! We’d be happy to here more from you. Send all your tips to our email [email protected]
Have a nice day!

xShadowKnight August 21, 2017
It’s ok but…the game lags a bit. Think about it, not all of the person that plays your game has a powerful device. Please improve this app’s performance so that everyone can play smoothly. Thanks for noticing…

Developer Epic Stars August 22, 2017 Thanks for the feedback! We’ll do our best to make it happen!

Erik Hernandez August 20, 2017
I would be cool that you could add something to make our own skins and to change the cobntrol layout feature and the thing you use to move forward and back wards could be cool that you gave us different ones to pick from likyhe octagon is harder to use for me than a circular one e a round one please

REDMASK YT September 6, 2017
This game is Epic! Go and beat PG3D! I love this game! And guys add Quest so we can get money and make the Skin like Minecraft a bit and hope to see your Feature updates !

Fridtjof Vik August 7, 2017
I’ve been loving it! And I truly mean it ? but …. it needs a story mode and more players. But hey the future in the game would totally rekt PG3D. And hey mind adding weapons and events or tournaments and please reply to me but I’m still loving the game ? cya ?

Developer Epic Stars August 22, 2017 Thank you so much! We’re working on a big update that’s almost as good as story mode. You’re gonna love it!

Aura Ciobotaru August 29, 2017
The game is great don’t get me wrong, but… Because there are no iron sights for the guns, it makes me feel like I’m playing a CS game…I don’t like CS games.

Firefinder 39TM July 14, 2017
Five Stars All! Its like pixel gun but you don’t get killed every five seconds because there’s no like super over powered weapens! I love it!

REDruby TFA August 25, 2017
Loved This more than Pixel Gun 3D You Should Remodel The Weapon And Make Player Interested to play this again! THX AND GREETINGS! And Make Golden age of It

Developer Epic Stars July 31, 2017 Thank you! We’d like to hear your ideas on how we can make Pixelfield better. Please contact us via [email protected]

Dream Breaker Remix Factory OFFICIAL August 8, 2017
I love it however I’m having trouble adjusting to the control layout is there any way you can alter the layout or will you guys add this feature in a later update

Developer Epic Stars August 22, 2017 Thank you very much! We will definitely add it to our future updates!

Developer Epic Stars July 31, 2017 Well I guess that’s a matter of taste. Thank you for review!

Developer Epic Stars August 22, 2017 Thank you so much! We also think these two games are not so alike. Our new update got a chance to prove it to you! Just look to Pixelfield’s new update, you’re gonna love it, I promise! ?

frmc gamer playz September 2, 2017
I love this game In one day I just started playing this game it is the best and can you guys make a gun that shoots a ghost out of it and it cost ?300 pls make it it will make my day the best in the next update

Len Kagamine August 13, 2017
Fun. But i have no idea why there isn’t much players and i am at level 5. Lol at least this game is a real good FPS game.Developer Epic Stars August 22, 2017 Thank you! We’re hoping to change it with our new update. The number of players increasing every day!

Developer Epic Stars July 31, 2017 Sorry to hear that. We hope our future updates will change your mind!
By the way, if you have any ideas on how we can improve Pixelfield, drop us a line to [email protected]

Sleptkodic August 31, 2017
Im just downloading this game and I decide when to download it when the community loves from what ive seen in the comments its pretty good. I jua hope it won’t be pay to win just like Pixel Gun 3D (that game makes me want to die). I hope this game is good

kyle bendy July 23, 2017
I think it’s a very good game I mite record this and put it on my chanel on YouTube

Developer Epic Stars July 31, 2017 That would be great! Please send us a link to [email protected] so we can like and share it!

MZ Xpertkiller MRBleach August 21, 2017
You guys don’t no how to make a multiplayer game I see 20 people online at the most your game is already dying make ads showing off the cool multiplayer

Developer Epic Stars August 22, 2017 Thanks for the review! We’re already working on a next big update that will make huge difference

Developer Epic Stars July 31, 2017 Sorry to hear that!
Would you be so kind to give us more information on this issue? Please, send it to [email protected]
We’d be glad to help!

UnknownJuly 26, 2017
It’s ok im not saying it is bad or good just play if you like it keep it don’t let anyone tell you otherwise

Pure_ Epic September 1, 2017
Pretty good! I can’t really join a match because there’s isn’t many people to be match up with. Hope you fix this!

Developer Epic Stars September 28, 2017 Thank you so much! We’re working on it ? Inviting friends always appreciated though

/ THE GAMING FOX / July 8, 2017
First of all this game is AWESOME but when I’m on the multiplayer no one’s on???? so if anyones reading this hopefully it’ll work for u

Developer Epic Stars July 31, 2017 We’re working on it ? Thank you for your kind review!

Developer Epic Stars August 22, 2017 Thank you! We’re actually working on this feature, hope to add it soon. For now, it might help to change your controller sensitivity settings. There are placed in the Game section of the Settings
Tags
Epic Stars
Facebook Twitter Google+ LinkedIn StumbleUpon Tumblr Pinterest Reddit VKontakte Share via Email Print