It’s good, but there’s something missing. Can you add something like the teacher is discussing and when you hit something she’s sad and scared and then hitting her like that. 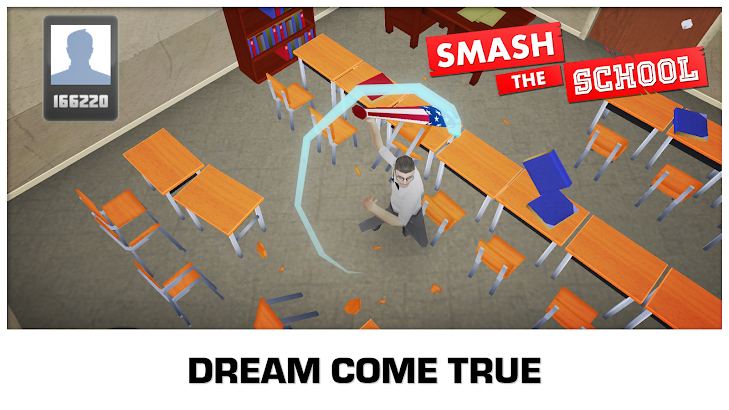 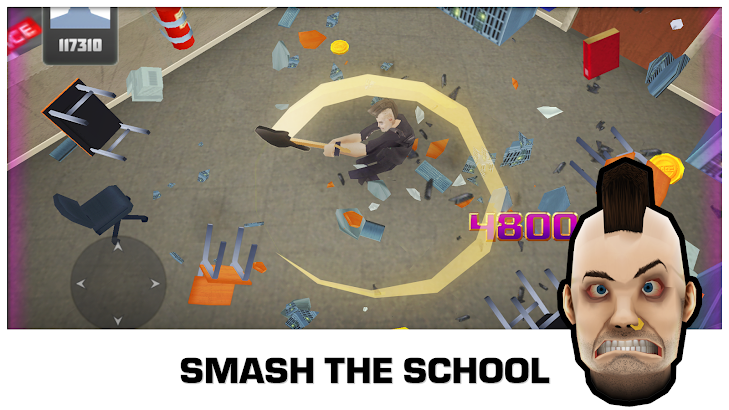 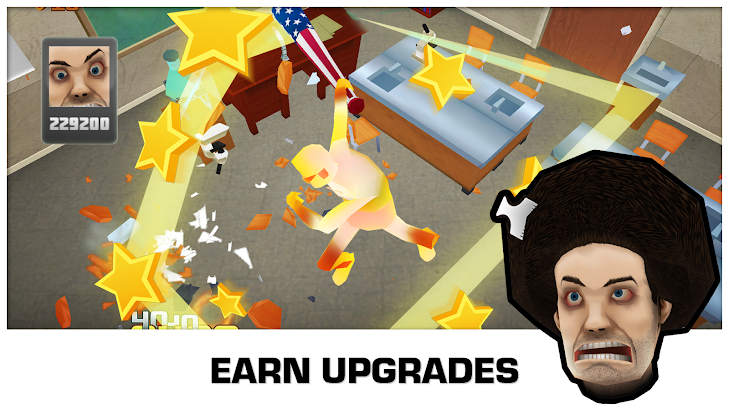 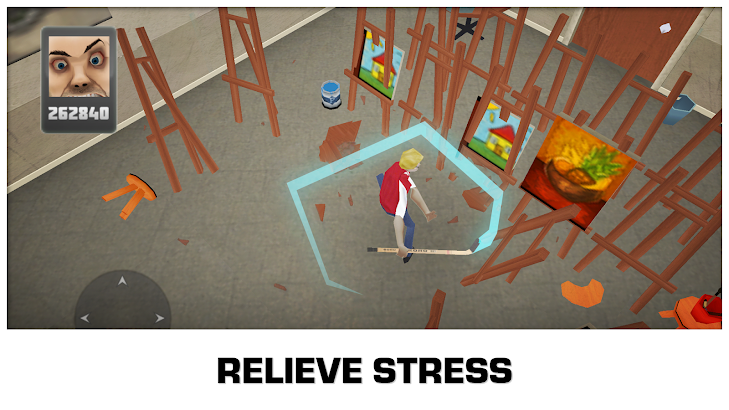 From the creators of Smash the Office!

Francis Joseph Ondong June 5, 2017
It’s good, but there’s something missing. Can you add something like the teacher is discussing and when you hit something she’s sad and scared and then hitting her like that.

Redstone monster May 2, 2017
Make a new one like smash the restaurant because it made me mader because the coins drop and i dont have enough time to get thaem

Jason O April 4, 2017
I love the “Smash the…” games by Tuokio!I wish there were more of them!I’ve played them all…. Smash the office is my favorite!

PJ MUSIC April 4, 2017
Why all men? Cant there be a girl smashing the school? But cool game dude

Daredevil gaming April 25, 2017
this game helps me with my stress

UnknownAugust 18, 2017
This is amazing!This has helped my anger issues more than my counselling at my old school.

UnknownOctober 19, 2017
Can you add students sitting in the desks and this is a great game go install it right now

Linda Sluka July 10, 2017
Add free play with no time and cops are chasing you

yesenia Ramirez September 6, 2017
Can’t play it I am pressing play but takes me to the shop

Muhd Rezhwan June 17, 2017
Makethe caracter a tornado when he spins

Toxic Teddy March 21, 2016
The graphics are great, It’s a fast paced game, the one thing that’s bugging me is that I don’t like the only one mode. If you can get more modes then I’ll rate 5 star.

Developer Tuokio Oy March 21, 2016 Thank you for your review and suggestion! We decided to have only one mode in Smash the School as in our Smash the Office we have multiple modes and felt that focusing on one mode makes a better game for (almost) everybody. We hope that you understand and thank you for playing!

Tina Dutton April 9, 2016
This game is by far the best game I have every played like who doesn’t want to be a grown man and smash the school lol the graphics are fantastic and it passes the time I love the way how you can pick loads of overpowered weapons so I hope anyone else agrees with me and plays this game

Developer Tuokio Oy April 12, 2016 Thank you for your feedback and for playing!

Hemant Kasturiwale January 10, 2016
My dream was that to punish and smash away the school and this has became true due to tuokio oy..Thanks my best partner..Plzz and some more objects to get the school smashed away

Developer Tuokio Oy January 12, 2016 Thank you for your feedback and playing! More objects – we are developing a new smashing game so our focus is on that and we feel that if you unlock all rooms in Smash the Mall there are a lot of objects. We value your feedback though!

Christine Cillo January 10, 2016
Hmmmm.A mediocre game, where you go around, smashing the same items……..over, and over. Brilliant!! Judging by the other reviews I’ve read, you have really hit the nail on the head, with this one!

Developer Tuokio Oy January 12, 2016 Thank you for your review and feedback!

Laura Cooper January 21, 2017
In real life I HATE!!!! school so this game is great for me lololololol also i think they should make a bank version of this like they have school,mall and office so why not bank an car dealer

Hazem Omr April 25, 2016
But i have problem when i open it show me samsh the school and nothing happen it dosen`t work fix it please for 5 stars ………….it`s stilldosen`t work . Could i uninstall it and install again ?

Developer Tuokio Oy May 5, 2016 Yes, you can uninstall and install again to see if that would help! Sorry for the late response!

Suketa Mehta July 24, 2016
Not 5 stars because add some people it will be fun and reduce prices of weapons and add darts which you can throw on objects also jetpacks with which you can move fast.THANK YOU

Developer Tuokio Oy July 26, 2016 Thank you for your feedback and sharing your ideas! People – we like to keep the game around physics fun (sorry!), moving fast – it’s challenging in this type of game but we like your idea of jetpacks!

BoomBoom inc August 1, 2016
Great and funny game. Amazing if you are stressed. To improve, you guys should make a second game where there are more modes and other things that other people want. Well done for your creation.

Developer Tuokio Oy August 4, 2016 Thanks, and thank you for your feedback! In our Smash the Office game we’ve more modes but yes, maybe there is a need for a different type of smashing game that follows the “original formula” only loosely.

Brooklyn Camilleri January 10, 2017
I rally love this game because it helps me stress out my anger for school because i hate school . Thanks for making this fabulas games

Julissa Bailon May 10, 2016
It was great for a while until i had everything upgraded and had all the characters and rooms and such. But when I had everything, it got boring really quickly??

Gage Blum January 12, 2016
Can you at least make the time 3minutes? It’s really annoying and I hate the one minute timer but otherwise the game is really good

Developer Tuokio Oy January 12, 2016 Thank you for your feedback! We are developing a new smashing game that does not have time limit. Stay tuned!

Rajya Laxmi March 7, 2016
I like the game because when I was bore or angry I will play this game

Developer Tuokio Oy March 8, 2016 Thank you for the review and for playing!

Timothy Chapman February 17, 2016
It’s a fun game but you should add challenges. Maybe smash the teacher or don’t get caught by the principal.

Developer Tuokio Oy February 18, 2016 Thank you for your feedback! Challenges – maybe in our new game, we decided to implement the Mission system in Smash the School and are not planning to add people to the game. We hope that you understand.

Nidhi Sharma June 6, 2016
I loved this game,by playing this game my mind feels fresh and stress free…..but there should be an endless mode & I think that there should be a chainsaw and a light saber in the weapons…..if u cant add people in this game can u add school principal’s idol or some thing like that.

david chow December 11, 2016
Im so dissapointed. I was so exited to play this game but it just show the dumb brand called toukio . Please fix.

Developer Tuokio Oy December 12, 2016 Sorry to hear about the issue and bad experience with the game. Does the game freeze on the loading screen, could you tell us what is the issue in more detail? It could be a device specific issue that we are not able to fix. You could try if restarting your device would help, sometimes it does. Thanks!

Sebastian Kairouz July 29, 2016
The game is good but maybe if you added multi player mode it would be better overall the game realt fun because i hate school

Developer Tuokio Oy August 4, 2016 Thanks, and thank you for your feedback! Multiplayer – true, we have considered that but figured it would be too much work, too hard to make it work well as an online game. : /

# OuttaNoWhere March 4, 2016
This is a great stress relief game. I play this when I’m bored in school. It keeps me happy.

Developer Tuokio Oy March 8, 2016 Thank you for your nice review and great to hear that the game makes your day better!
Tags
Tuokio Oy