Join the FPS war as an elite sniper! Shoot and save the world!

Started the game and after 2 to 3 assignments, game is frozen saying “You have already got a training token, time to use it”. A blue arrow blinks, but the touch do not work at any point of the screen. Developers please suggest. Is it time to uninstall the game? 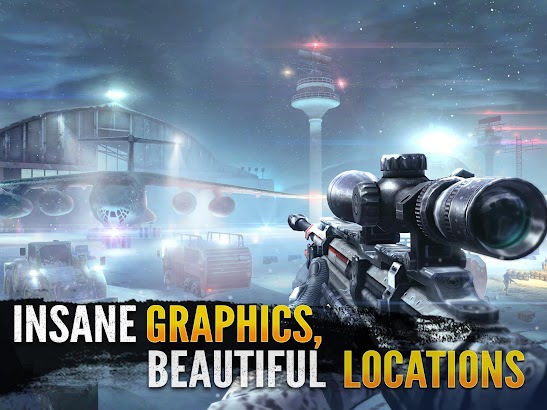 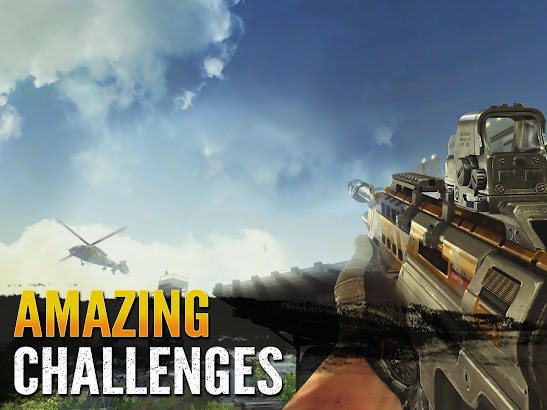 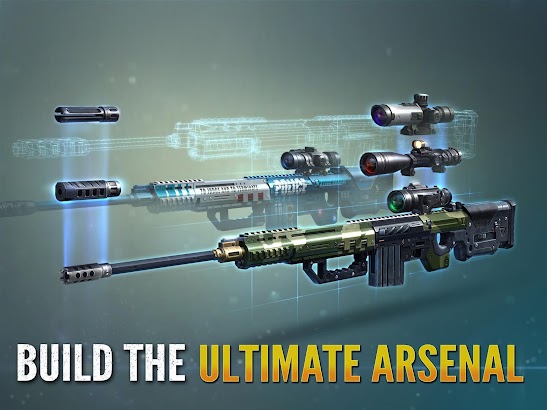 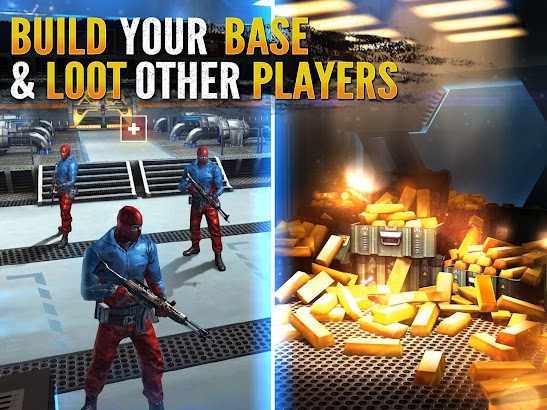 The time for diplomacy is gone. The time for drastic war action is now. We are calling for the best sniper in the world to join us as we take aim at evil, wherever it hides. This is not a game. There is no room for remorse here, so shoot to kill.

A STUNNING FPS FIGHT AGAINST EVIL
• 130+ action missions.
• Unbelievable 3D graphics that will bring you to the near future, from urban skyscrapers to exotic locations
• Soldiers, armored vehicles, air units and many more enemy classes
• Next-gen “bullet time” effects capture your every amazing sniper shot
• Sandstorms, blizzards, rainstorms and other rich atmospheric effects

EASY TO PLAY, MUCH TO MASTER
• Varied AI behavior makes each enemy unique and challenging to shoot & kill
• Extra rewards for joining the action in special events
• Connect to the game community to discover more content, more contests and more rewards

The strong, amazing-looking 3D FPS sniper-shooter game you’ve been expecting is here. Join the war and shoot to kill. Rack up great shots rendered in fantastic graphics, sharpen your skill set, and upgrade and personalize your weapon as a special ops military agent. Prepare the assault and get ready to kill the attackers. Try the multiplayer game in our special PvP mode. Join the war action, and don’t forget to rate the game and share with your friends if you like it.

LEAGUES
• Earn a high enough score to enter a league and unlock rewards! Then check out who’s top of your league on the Leaderboards. Guard your gold and secure your position using the brand-new SHIELD defense system

CLAN HQ
• Establish a home base for your Clan that members can help improve together. Clan HQ buildings can unlock loads of perks, including PvP boosts, Tier-5 Squadmates and much more

CLAN WARS
• Prepare for a new game mode where Clans go head-to-head in the ultimate showdown. Declare war, weaken the opposing clan’s Reactor Core, and pillage resources from them

You can download and play this game for free. Please be informed that it also allows you to play using virtual currency, which can be acquired as you progress through the game, or by deciding to watch certain advertisements, or by paying with real money. Purchases of virtual currency using real money are performed using a credit card, or other form of payment associated with your account, and are activated when you input your Google Play account password, without the need to re-enter your credit card number or PIN.
In-app purchases can be restricted by adjusting the authentication settings within your Play Store settings (Google Play Store Home > Settings > Require authentication for purchases) and setting up a password for each purchase / Every 30 minutes or Never.

Find out more about the game — http://www.sniperfury.com/

Partha Lodh October 23, 2017
Started the game and after 2 to 3 assignments, game is frozen saying “You have already got a training token, time to use it”. A blue arrow blinks, but the touch do not work at any point of the screen. Developers please suggest. Is it time to uninstall the game?

Gordon Abkes October 21, 2017
You shouldn’t have taken the gear packs from the up and coming guys.All the top guys got their gear packs and have all their gear so they love it now the newer guys get screwed.Save rubies for months or spend your real money to buy them to get gear packs.Way to give the older player all the advantage they need to never be challenged.3 star until you return the gear packs to even the game out again

Indignant Beaver October 22, 2017
Could use less ads really. There are enough ads to watch for free items etc… that I shouldn’t need to watch more every time I am in the mission tab or back out. Otherwise, everything else about the game is amazing. Crisp controls. Easy – Moderate – Hard levels of difficulty. Solid game.

Elroy Fernandes October 15, 2017
I bought some cash, bought the combat pack 4 times now and it doesn’t give me option to go next… Its really annoying..5will give better stars once resolved… Am done with this stupid game… I finish all cash just buying combat pack and it doesn’t go ahead after u purchase… Waste of money and time… Thanks cheaters

Dian Utomo October 14, 2017
Great game. Great graphic. Addictingand exciting game. Things I hate about this game. First, PvP just not fair. You only have four changes to battle. Giving me an unevent opponent that never got the chance for me to win. Secondly, the ads. I dont mind with the ads, its just some ads that turn your phone to a potrait mode, when it finished, it doesnt return your game back to a landscape mode anymore. I have to force closed the game to actually play the game again.

Bootcamp Blitz October 15, 2017
Was really enjoying playing this game, until I got a new device and it won’t transfer my progress! Customer service is a joke!!! No reply to anything even though this issue is a ‘known fault’ I haven’t played this game since I got my new device and I won’t until I can get back to where I was before!

UnknownOctober 21, 2017
The game is to stretched out and the levels should be easier to achieve ,considering its such a big game, the weapon upgrades need to be more simplified rather than parts and parts an more parts (u need more parts) god damnn get rid off that junk and let the user enjoy game play rather than wait for parts, humble request otherwise satisfying gaming

Derrick October 16, 2017
It’s a very addictive game, Great Graphics, there’s a great turtial for beginners, but pretty easy to figure out. If you join a helpful Clan,u can learn fairly quickly. Highly recommend. Customer service is a bit lacking, but liveable.

Ritesh13 Agrawal October 22, 2017
Your update for black market is very bad.not getting the things I want and I am uninstallingthe game after 5 months of playing and will also get uninstalled from my friends and never let anyone from my friend to install this type game where update are this type type of poor

colt s October 20, 2017
This thing is froze I just started the game and got to the part where you update your recruits and its saying I have training points but I don’t. And won’t let me click anything else so stupid

VARUN October 22, 2017
Not totally a Good game. iam not like this type of full online game and it take loading again and again after a play. It makes really irritation. Not good, Not bad.

jins joy October 15, 2017
Feel like cheated. I open 1 exclusive pack and got a 4 tier deuce.but i cant find him in my squad mates. I lose my hardly earned 200rubies.

Caleb Smith October 22, 2017
Good game, easy controls, but its a bit too easy. I made top 5 on the leader board in the online base mode in a day. Wish they’d make it more difficult, but good game over all.

Dominic Kronholm October 18, 2017
The story is great the graphics are sublime Im just having trouble opening crates and I don’t know how to use my battle icons I need help on that but other than that I give it a 95 great game

Latest update looks unpolished and earning rubies is a real pain. Free battle packs are a thing of the past after this latest update, really hard to come by. Constant crashes, really sick update

Perikala Narendhranath October 13, 2017
Hi I have playing this games and completed so many states but I changed device again I am starting from the starting please help me for getting old stages

ryan yazdi October 19, 2017
This game is so buggy, i tried to complete the enigma event and ON THE VERY FIRST PART it complet3ly locked the game as it didn’t give me the weapon part GG GAMELOFT GG

Max Taylor October 23, 2017
Wouldn’t download the beginning with Wi-Fi or data, tried redl it and it still wont. Freed up more than enough space. Looks goods but looks don’t do anything without gameplay

Watermelone 28 October 21, 2017
I don’t know what the graphics, the gameplay or the controls were like. I never even got onto it. It kept asking to delete 1394MB. Nearly deleted my entire phone. Made no difference.

priyanka mishra October 21, 2017
its a trash….i downloaded it and everytime i tried to play it shows that u dont hv enough space to downloadfiles…though i have 2 gb space available. ..waste of time….

David C. Holman October 21, 2017
Good game nice graphics lose money opening battle packs your 13000 Cash reward does not show up and you need to spend a lot of cash to get anywhere in the game, prices for in gameperks and accessories are too high always feels likes you need to get more gold and in game cash to afford anything getting bored and tired of playing and special events are hard to get anywhere always going back on missions to get parts to upgrade which does not help since you have to play the mission more than two time to receive the parts, like I said getting boring and tiresome

UnknownOctober 19, 2017
This is a great FPS game. There is one problem. On some missions it tends to lag quite a bit.

wade bahu October 15, 2017
Get over the repeat music average grafs. Its thr upgrades that keep it moving alonge, with lots of carnage in b etween

Baban Kute October 23, 2017
This game doesn’t starts quickly & it is a online game it will not show when we downloading this game it very boring also waste of time

Azim khan Saad October 16, 2017
Best game it sniper but not open esy liner but i think sniper furry game team support me And next time understand my hop that’s is

ayaz mahida October 12, 2017
UpdateSucks… U should not have Decreased the Rewards of Specials ops.. Very Bad Move.

Derek Fox October 13, 2017
Great game the graphic are the best!And challenges.But not so bad you can’t WIN. And I love to WIN !? Fox.I

Sharmila Sundar October 23, 2017
Don’t ever play this game I feel like slapping the man who found this because it is not working and virus have attacked

Arowolo toba October 20, 2017
It’s a great game,super cool graphics and all.Addictive. I can’t buy stuffs with my card tho,kindly advise on
this.

UnknownOctober 20, 2017
It was a game which I was never played before the thing I hate in this game is the first downloading loading it takes too much of time

Vinodh Kumar October 21, 2017
No I use it’s getting download nly slow very slow I dnt want like play bcze irritated

Austin Coleman October 17, 2017
Won’t download use to give me a option to download on mobile data or Wi-Fi doesn’t anymore ?

UnknownOctober 14, 2017
It has some good graphics but its terrible one mission was so lagy I couldn’t shoot anything and I still can’t make it past the level no matter how good my internet or WiFi connection is I can’t move I’m so outraged I threw my device no one in my family could fix if or beat it worst game ever!!!!!!!!!!

UnknownOctober 21, 2017
The game need very much internet and did not work in Slow net only show error

SHOURYA JAIN October 13, 2017
Graphics in the screenshots are good as they are edited but the real game’s graphics are just ok, make them more sharper.

Jagjot Singh October 16, 2017
I am recieving ERROR Glni in the startingHOW TO SOLVE IT?
Tags
Gameloft