Catch the FEVER in an explosive race against the clock!

Vector, Rouge, Cream, Mountain Zone and Cosmic Zone are still waiting to be released…for almost three years now! This game is so neglected it’s just sad. Can’t even get all its content released while Sonic Dash has weird crossover-events going on all the time that don’t even have anything to do with Sonic. 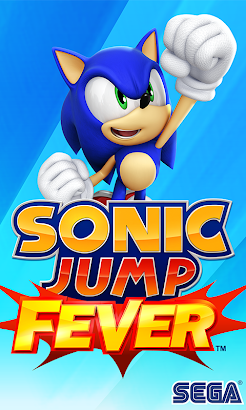 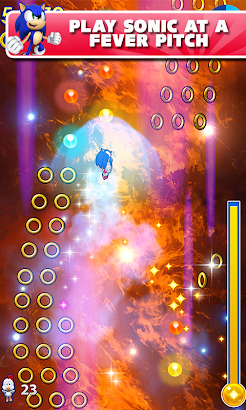 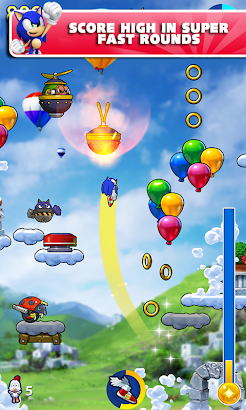 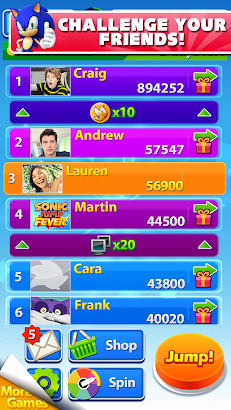 Catch the FEVER in an explosive race against the clock! Compete with Sonic and friends in high-speed bursts of vertical jumping mayhem. FREE and based on SEGA’s hit Sonic Jump.

Prove you are the best. Rack up huge combos to blast past your friends’ high scores. Use boosters, upgrades, unique character abilities to maximize your score. Then kick into overdrive with Fever Mode and hit the top of the Leaderboard!

CHALLENGE YOUR FRIENDS
Compete with friends for the highest score. Play and post your scores on a Leaderboard that you share with your friends. The leaderboard updates instantly after every turn. So the competition never ends.

PLAY & UPGRADE A CAST OF CHARACTERS
Play as Sonic, Knuckles and a host of famous characters. Upgrade their unique moves and abilities to help them soar to the skies.

UNLOCK THE POWER OF THE CHAO
Recruit a legendary Chao from the Sonic universe! Find all the Chao to help you beat badniks, search for hidden rings and many more unique abilities!

© SEGA. All rights reserved. SEGA, the SEGA logo, SONIC THE HEDGEHOG and SONIC JUMP FEVER are either registered trade marks or trade marks of SEGA Holdings Co., Ltd. or its affiliates.

Optimizations and refinements to improve your game experience.

L_A 8 January 26, 2017
Vector, Rouge, Cream, Mountain Zone and Cosmic Zone are still waiting to be released…for almost three years now! This game is so neglected it’s just sad. Can’t even get all its content released while Sonic Dash has weird crossover-events going on all the time that don’t even have anything to do with Sonic.

Agonis Bliss April 3, 2017
Interesting game. Plenty to keep you occupied. Lots of characters to unlock and challenges to beatHowever, poorly placed ads ruin the experience. If there was not a 30 second ad after every run I would give this 5 stars. However you lose one for the ad intrusion.

OtherSnootch94 February 4, 2017
It can get very addicting. I like that nothing is really shoved in your face (minus ads, but those can be avoided). The controls are easy to use, maybe a little stiff, but not enough to hurt the game. Good on ya, SEGA!

Medea Rose July 8, 2017
Great game! AlthoughI think you should make a Chao garden where we can do similar things with our Chao in Sonic adventure 2 battle. Also I keep watching videos to gain energy and I never received my energy after watching the videos.

Icky Loveless September 14, 2017
The music is impressive but I’m not surprised. Sonic games tend to do that even on Android titles. Sega’s musicians are top notch. The gameplay, while different from Runners, is definitely something I would suggest to other Runners players. It’s simple, addictive, looks nice, sounds nice, and responds well on my low performance phone.

Meagan February 3, 2017
All in all an okay game, the ads after EVERY round is a bit much, BUT since your not forced to watch them, and can X out at anytime they aren’t unbareable. Other then that I have no complaints.. its a decent game.

Bara Sempai February 9, 2017
A pretty good game, easy to farm for power ups, has a bit of an exponential curve once your fever gets past a certain level that it becomes easier to work towards something. I think the hardest part of the game is befriending Chao due to the limited amount of energy you get per day. Not a pay-to-play intensive game, fortunately.

Aslam Shaikh August 18, 2017
Game is good with some issues. Adds are normal as it’s a free game but when some adds come after the spin and after the stage complete, there is no way to go back to the the game. The add screen stuck there only. To play the game you have to close the entire game and open it again

Zoe Meredith July 7, 2017
I think the Sonic Jump Fever video game is absolutely fantastic because there are lots of levels to explore, lots of characters to unlock, find lots of eggs in the magical forest, spin the wheel to receive lots of prizes, items and save the birds from Doctor Eggman to put them in the hot air balloon. I think the game deserves 10/10 because I really enjoyed playing the game.

Scotta Putman October 23, 2017
It’s a good game, but… you constantly have updates and events for sonic dash, ( witch I find boring ) but you do nothing for this game. Sorry SEGA, but you need to remember your other games too.

UnknownFebruary 17, 2017
Pretty much the best game i have ever played.Great graphics, super gamplay. But 1 thing. You should be able to use a character 1 time if you watch a video. That was the only thing that you could improve on.

Dominik Vukmanić September 29, 2017
I am giving this game 2 stars only because hitboxes are terrible and Knuckles is trash. Everything else is 5 stars.

UnknownMay 11, 2017
Great game please add more characters like the Freedom Fighters from the Archie Sonic the Hedgehog comic series. This is not a joke, I’d really like to see them in a game for once, and if you do, don’t make it one of those “take a challenge and see if you can unlock everyone before time’s up” things, I’m sorry if I was rude I’d just like to see them in a game again like in Sonic Spinball. I am not old, I have the Sonic Mega Collection Plus game for PS2, and I’d see them every time I completed the Special Zone after I defeated the boss. Okay, I may play old school games but I have fun playing them, and, yeah, I collect old games are ya happy now! Great, I just turned into
Rocket Raccoon(I’d like to see what would happen if he got a Frenzy Wisp, or any of the others. That would be bad, awesome, but bad.) CyberWolf out.?

UnknownAugust 4, 2017
I love Sonic, and this game does not disappoint! I just wish there was a free, quicker way to unlock the rest of the characters. Shadow is my favorite character- and sadly, on this game, will be the toughest to get…

Josh Shutz April 21, 2017
The motion controls are not sensitive at all. I practically have to turn my phone on it’s side to get sonic to move back and forth across the screen.

Aschell August 13, 2017
It’s fun to play when you’re bored, but its a tilt game. So to move left or right, you tilt your phone left or right. It’s a little irritating. But it’s not a bad game

Felis Tigris October 24, 2017
Gameplay too chaotic. Controls are bad. All levels are the same. Too many upgrades asking you for your money

Maria Figueroa February 3, 2017
It’s okay it’s nice but really it’s like all you do is jump and get coins and put animals in there and you have to pay I wish there are games where you don’t have to pay and a lot of people there but what is all about is cool but you have to make it a little bit cooler maybe people will start downloading it my brother really likes it and he’s like into it so I mean it’s okay for him but really make some better games people out there make better games it’s a lot but the games are so cool you know there’s a geometry game it’s so cool it’s not about math it’s about you jumping over things

Mark9 February 8, 2017
best sonic game for Android must keep videos for refills without it takes 24 hrs so it’s wise to play half of your refills each bar is like 12 minutes would add landscape view perhaps jump button also 3.99 super charger pack price isnt bad for quicker refills I am big fan of sonic boom 1 (3ds) so keep up the good work -saaaygaaa

Melchior August 7, 2017
I played a long time ago and amassed many chao, coins, and characters. Didnt play for awhile, and now all of the things that i had are gone. Wth?

Kurt Corbett April 28, 2017
Having to tilt my device to play this game is, for me, not at all fun. It would be good if you could move left and right by just tapping on that side of the screen.

FoxGamer February 23, 2017
I still love this game its amazing I’m rating it 5 starsI remember playing this game ages ago and I haven’t even installed it yet on my iPad I can’t wait to play sonic mania anyway I LOVE THIS GAME AMAZING

Jesus Villarreal April 13, 2017
The mechanics of the game are very smooth and work seamlessly. The energy system is kind of a turndown, though it could be improved by adding the ability to stack more than five energy, something akin to Sonic Runners on iOS.

Tomas Berenguer September 29, 2017
I loved this game. And thanks to this app, still do. The only annoying situation is when you run out of lives which tends to be real quick.

The_purple_haired_gamer June 28, 2017
This game is great. But one problem. It doesnt have cream, vector, espio, clasic sonic, charmy bee, or mighty. Thats it other than that its amazing

Amar’ri Green July 14, 2017
You are the one I have been a member of member States and other western countries are the best 9th 8th and a half hour to 2nd and other things I need you here is my first day 6th to the one that is

Jesse Stewart August 8, 2017
It’s a good game, not bad for killing time. Energy doesn’t seem to refill when yo
u level up, which is unlike every other game that uses an energy system, so that’s weird. Otherwise, no complaints so far.

Henry Gaming Network February 3, 2017
Very good! However, release Rouge, Vector and Cream as unlockable characters and give the game landscape support. IT’S NO USE playing with my tablet tilted in a portrait shape.

Chris Avelino June 11, 2017
I played this game and unlocked some characters and chao but when i opened the game everything disappeared and restarted. All of my progress was gone. pls fix this.

Destiynee Lansangan February 13, 2017
I love the game especially with all the characters in it!! It may be quick with the limited timing but still a great game all around. In my opinion it’s a bit better than sonic jump.

Dragoncam13 February 27, 2017
*Please Help!* Whenever my tablet broke I had silver,plus some other characters and all the chaos.So I redownloaded it on my phone and I lost silver and all my chaos!

Mach Emerald March 10, 2017
I think its a very good game but i think you should add a button to press when you have full fever so it does not happen before you get a token…..

Shadow Likes Lava July 22, 2017
I just love it. You get to be many different Sonic characters, and you can get chaos! I prefer Dark S-Rare

UnknownSeptember 15, 2017
It’s a cool game! But I hate the batteries of the game.

d barnes June 13, 2017
This is fun to pass the time with but u have to wait to recharge after so many trys! But other than that GREAT GAME!!