Love this, love the new ships too, perhaps receiving more gold for the new ships. And if certain players use unnecessary bad language for their names, it should be banned and such players shouldn’t play. Otherwise stars go down, and you’ve lost someone for this game, despite it being a good game. 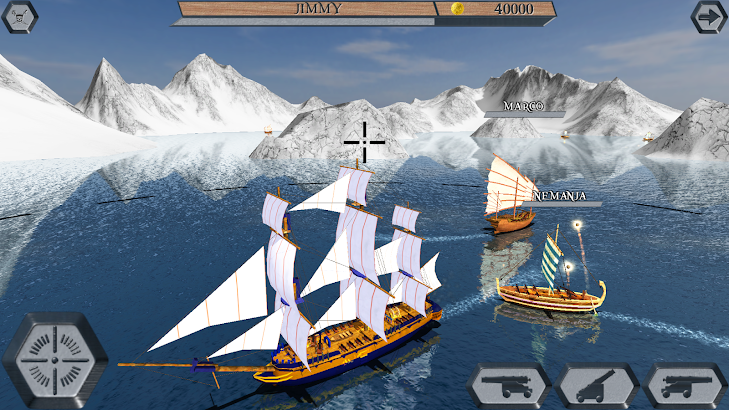 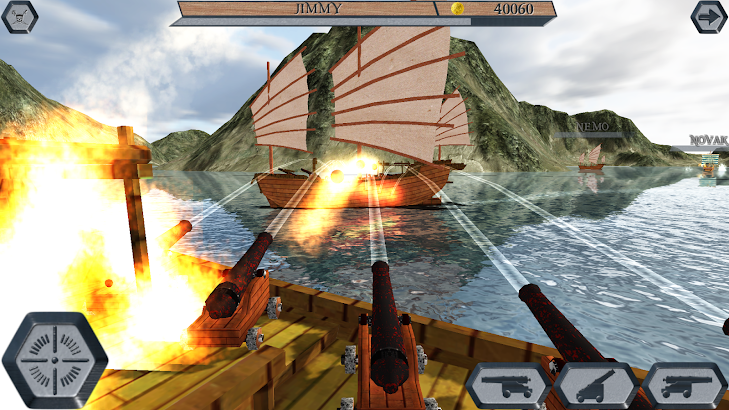 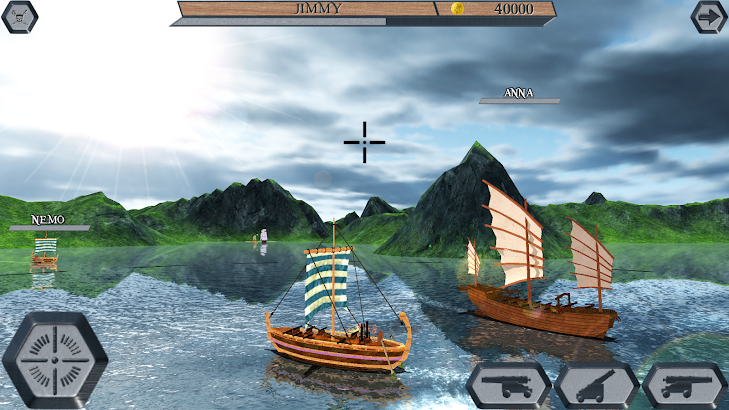 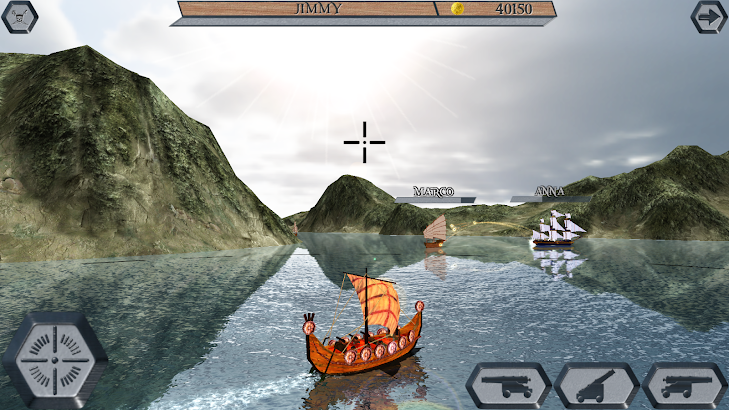 Immerse yourself into the world of large scale sea battles with pirate warships.

World Of Pirate Ships is a classical, free for all, death-match, multiplayer only, game for 10 players (ships) per map. The goal is to destroy, as many as you can, enemy ships . Each round is 10 minutes long after which map changes. For every hit with your cannon you get gold. If you hit bigger ship, you’ll get more gold. You can spend it on upgrades or new ships. Controls are very simple. Just tap on the water to set new direction for the ship and tap and drag for aiming.

UnknownSeptember 14, 2017
Love this, love the new ships too, perhaps receiving more gold for the new ships. And if certain players use unnecessary bad language for their names, it should be banned and such players shouldn’t play. Otherwise stars go down, and you’ve lost someone for this game, despite it being a good game.

Skorca illy September 7, 2017
Everyone has unlimited range except you I was getting shot at but the cannons can’t aim high enough to arc the shot nor can it reach far enough it’s a stupid game pay to win…

Gian Brigneti October 17, 2017
Somewhat reminicent of an old PC DOS game i had as a kid… the ancient art of war at sea… i loved it. This game is even better, awesome gameplay.

jo lo September 23, 2017
Nice game but need more work. More ships and it is more and more freezing when playing. This must be fixed than you get a higher rating from me.

Young Living Essential Oil Mama September 15, 2017
pointless to play!no range or power when u start!easily destroyed with one volley…..POS game dont waste ur time downloading it!

Dawn Goldsmith September 17, 2017
Don’t even know why you made a game like this sucks

Emil Hortea August 30, 2017
Really nice game and I don’t mind not having to chat with anyone just would not mind more ships or upgrades. Maybe some guild system?Later edit: new ships and upgrades are awsome. Good job

Anthony Almirall August 17, 2017
Should use dubble click to navigate ships as when you use side cannons and accedently touch next to shoot button the ship turns. Question:my ping is high, what effect does it have on the game for other players and do you take messurments on such players because my phone just went crazy while I was playing the game. Like someone was messing around inside my phone. Had to clear my phone.Great game though.

Developer Catchy games August 18, 2017 You can make “shoot button” larger in settings. When your ping is higher than 1 second it is not allow you to take any action because it will lose synchronization with other players. It means for example that position of your ship will not be the same to all players and you may receive hits even if you see clear miss on your phone.

Melynda Brown June 8, 2017
The game is really good, and suprisingly addictive. Though, a chat system and a campaign to earn some extra dough faster would be great. Alsoto make the ship sinking more realistic, instead of the whole thing blowing up into pieces, it should stay together and sink into the water. But please make it easier to get new ships because they’re really expensive. I would rate 5, because the game is actually great, but please add these and I will rate 5.

Developer Catchy games June 10, 2017 Actually ships are not that expensive. You will find that you can unlock top ship in a few days of playing.

Troy McGuire May 21, 2017
A fun sea-battle game with cannon. Yeah, you start out with a wimpy ship and have to fight your way up the ladder (if you don’t buy your way up), but I see that as part of the fun challenge. I love that there is a good array of scenery too.

Lucas Catron May 27, 2017
Be better with waves and maybe rain and maybe even darker days and stuff but be nice to actually have allies and be able to talk to other players. Cause not fun when everyone doesn’t trust each other and blows them up and your always alone.

Developer Catchy games May 28, 2017 Chat will be implemented in the next update. Also we are looking to implement team matches.

HAPPY DUCKLING IS AWESOME March 20, 2017
I loved the game but sense the new update the black pearl has been way over powered. I have the boat before that I and I used to be able to kill them, but they kill me in two shots (now) plz fix

Evan Werley July 14, 2017
Addictive gam
e for sure Tomorrow I’m going to have to dump my girlfriend, drop out of college, and toss my dog off a bridge so I can have more time to ship battle. Kidding about the dog but give this app a try, you don’t have to pay to do well and enjoy it.

Justin Wall June 11, 2017
Personally I would have liked to see more maps then just the handful we get plus even with graphics at high it didnt seem to change anything, finally adding wind as a obstical to your advantage or disadvantaged would have made me put on the 4th star. But since it doesnt I didnt.

Brian Hill May 30, 2017
Hello creators of this game thanks for 100s of hours of laughter and fun. My girlfriend and i both play. I am currently no2 ranked player or was until sometime today a game hacker with a ship name called “GALEON DE DAYEN CG whom suddenly appeared from nowhere to become no1 and earn 18 millions points in one day. NOT possible. It took me 5 weeks from start to earn 5 million which equates to150+ hous of games play. Could you removed this cheat who is making a mockery of the game for you 4000 plus player. A prompt response would be appreciated. Ps i have recent progressive and periodic screen shots of the leader board to support my claim….

madcatproductions69 April 3, 2017
Everything since the update my monthly and totally status stays at zero. I have almost 2 million USELESS coins. Make more ships or add stuff we can buy ffs! Very glitch as well.

UnknownMarch 29, 2017
Needs more to do. You basically war at sea with other players over and over. However all the time you spend growing your ship is futile, as anyone can spend $5 for a fully upgraded max ship.

C Michael March 18, 2017
WHAT THE HECK I SPENT ALL MY GOOGLE PLAY ACOUNT MONEY ON A SHIP AND IT DIDNT SHOW UP AS MINE 7 DOLLARS DOWN THE TOILET !

Akshat Jindal June 18, 2017
I like this game very much and I have max upgrade black pearl. Now what I do?. My point is plz do some updates like chating with another player, Team fighting , open new more advanced ships , change whether condition like rain . Plz do more challenging .

GW C April 15, 2017
This game is sooo boring u cant even kill anyone if there bigger than u this game sucks! just get assassins creed 4 if u want fun pirate Game!

Brian Tumlinson April 9, 2017
How can I get my 1.236-million gold coins back, after I updated it took all of my gold that’s pretty messed up.? it also took all of my upgrades.

pro cal June 2, 2017
This game is the best pirate ship game i have played, please can you make more things to upgrade also new ships would be cool too thanks and cant wait for next update

Joe Montes March 14, 2017
The new update won’t let me use cannons or aim please fix this if you do I will rate This five stars I promise if you promise to fix this

Developer Catchy games March 15, 2017 Turn on cloud save (login button) to save your progress than reinstall the game if you still have any problems.

Dana Roberts April 21, 2017
Be a great game if it didn’t crash so much.. Now I’m staring to my home page listening to the creaking of my ship

Luis gatter April 12, 2017
Overall it’s a good game but it gets boring u want me to keep plying it add more stuff it gets boring playing over and over I already have the black pearl didn’t buy.It’s already maxed and it got boring after a while so please make the game better and fix bugs thnx.

Titanplayer 134 July 30, 2017
Graphics we’re okay but I really hated the fact that you couldn’t really aim very well and the fact that the ship’s turning radius sucked you need to update that and fix that

Jody Sleek April 13, 2017
RE: Incorrect development of controls. You can’t adjust the AIM without the ship repeatedly steering off course! Its an ANDROID action-game requiring fast, splint-second aim-adjusting to quickly pin the spot to lay cannonballs that take approximately 4.5 seconds to hit spot. Players will be constantly touch-adjusting their aim which doesn’t work if your’ve also got touch navigation. This control-development doesn’t allow you to play your best either. Basically you cant control it on android. Shocking. Yet another one of our good sort of ideas & game completely ruined by… poor development. If you can’t develope it for ANDRIOD… take it off googleplay then. Or state that i
ts NOT AN ANDROID GAME. Its obvious you must have known about all this. Therefore just a rushed SCAM-ARTIST then! Thanks a lot:(

Garrett Cline June 22, 2017
I would rate this game higher if it wasn’t a p2w. I like the concept of the game but the game could be better. An easy way to make it better (in my opinion) is to have a level system.

Darren Hulston March 14, 2017
Love it but .what next after top ship and upgradesjust building up gold for what? Need more ships. And exstra’s

UnknownJuly 23, 2017
I think this is a really good game…but I reckon it would be great if this game had a chat button or even just like chat rooms so u can play with real life friends etc.

Ryan Gandy March 22, 2017
Great game all around just needs a few more ship and upgrade options but can’t wait to see where this game goes.

Allen Alander June 29, 2017
Terrible game,thrown in with high rank player’s from the beginning you don’t have a chance

James Brettelle June 29, 2017
Game is good have maxed ship needs more also you have a serious cheating problem small ships that can outrange outrun and out gun bigger ships other than that good game

I am Kozzmo667 May 30, 2017
Ban the hackers, please. Restart the scoreboard and use the spare coin total as the counter, please.

Lorenzo Columna June 17, 2017
This game is so much fun I am gonna die by the awesome game playwhoever is the creator of the game thanks??

Mert Gumus March 19, 2017
No way use weapons and aiming after the update…I can’tsee any world top 10 players…just bs..