Find the exit, kill enemies and recover stolen gold from the Vault! 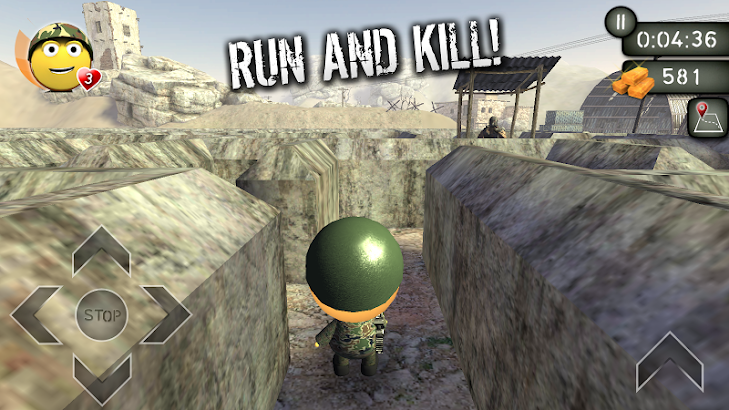 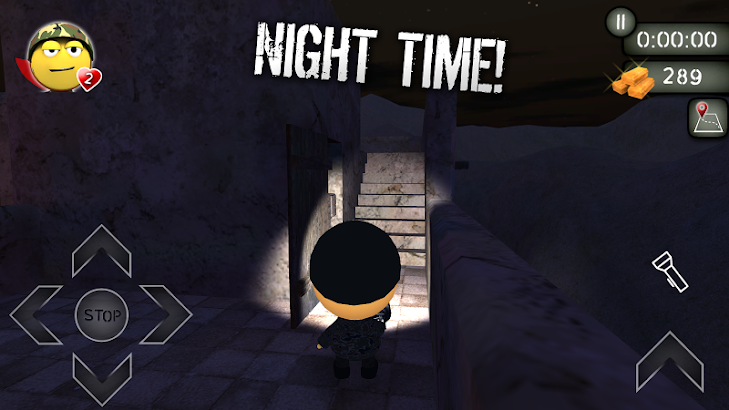 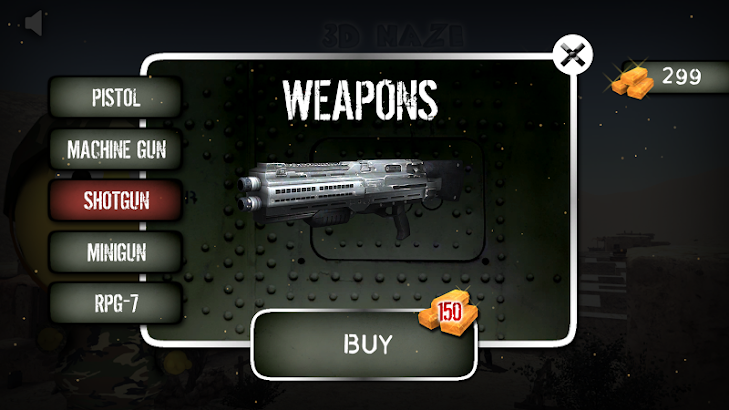 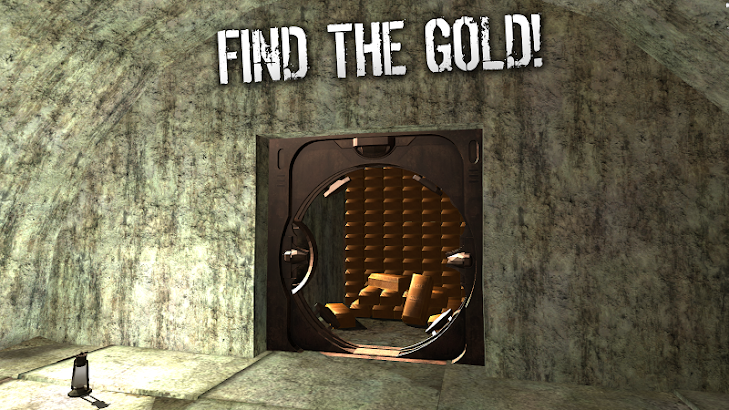 Mission Objectives
Find gold stolen by thugs! Don’t let them get away with that. Our contact tells that they are hiding somewhere in Afghanistan territory.
Your special skills and choose out of 5 deadly weapons will make it easier for you! Collect gold hidden in secret areas to unlock better weapons and kill enemies faster without a scratch.
To make it more interesting you need to get through complicated mazes as fast as you can.

Be careful – inside the maze you can fall into enemies, so check your radar and map often.
You’re fighting in the desert labyrinth location? Wear desert camo to blend more into environment. Tired of waging war? Try our special uniform – pink one!

Watch out for the green spots hidden in the ground – those are deadly land mines! You can also fall into them inside the labyrinth.

3D Maze: WAR OF GOLD features
● explore open-world areas and complicated labyrinths in 6 different locations
● kill 5 different kind of zombie-enemies wanted to stop you from finding The Gold
● choose between 5 weapons including Minigun and RPG Rocket Launcher
● collect dynamites! You will need them later
● marvel at stunning places full of mountains, trees, cliffs and middle-east buildings
● fight during day and night. It’s too dark? Use a flashlight!
● find secret areas for more hidden gold
● buy new stuff and lives in shop for gold you have found or bought
● use map if you get lost in one of five labyrinths
● jump to avoid landmines and get quick orientation inside the labyrinth
● use help of your fellow companion Joey
● unlock new achievements and compare your scores on Leaderboards with your friends
● radar! You can see where your enemies are hiding in the open area as well as inside the maze!
● change your uniform! There are five different types of camo!
● find The Vault!
● at the end fight with Boss!

Check also our Virtual Reality demo version (for Cardboard) of 3D Maze: War of Gold in our apps!

Alexander Leonov August 19, 2016
Hard to understand what is it the maze need in the first level. Probably the soldier should looking for the hymen virgin girl in surrounding bushes, but aliens destroyed his disfunction…

Leonardo Raphael April 17, 2016
I defeated the whole game and collect 1,000 golden bars.This was the best game of my life.

Developer mobadu September 6, 2016 We’re happy that you enjoy the game !
Thank you !

Developer mobadu September 6, 2016 And we love that you love the game ?
Thank you !

Claire Bear December 28, 2015
Thankyou for a fantastic game best on here!!! AMAZING!! MORE LEVELS THANKYOU FOR THE GOLD AT END AND LIVES TO COMPLETE!!! ??? AH IM HAPPY…One thing if possible could we have more freedom on the controls at the minute its a case of hitting left right up or down…This doesnt affect the game much though…Thanks again…ANYONE MOANING ABOUT THIS GAME HAVE SERIOUS BRAIN ISSUES!!! They only moaning because of the success of it!!!

Developer mobadu December 29, 2015 Thank you for your kind words ?

Developer mobadu January 4, 2016 Yes. We’re planning a second part of the game. You need to be patient and you will see what will happen ? Lets just say that “Gold is always a trouble”.

Judy Mankowski December 17, 2015
A sucks, would have uninstalled anyway. But the thing thatut me over the top was being ripped off again by cash pirate and not creditedoints promised by them. I would suggest spending your advertising money with an honest company. You lay down with dogs you will get fleas.

Ted Mankowski December 19, 2015
Ripped off AGAIN by cash pirate, why do you give these theives your advertising money. Uninstalled their trash if you continue to advertise with them, I will never install another one of your apps.

Developer mobadu December 19, 2015 So report it to them not to us. Don’t give 1 stars not related to the game itself.
Regards

Martin Seward December 19, 2015
this app is extremely difficult to use especially when you get attacked by one of the enemieson top of that the directional d-pad need some work it doesn’t stop walking until you push the back buttonkinda just keeps going in the direction you pushextremely difficult to navigate to Plainfieldwould be nice if they added on keyboard commands with the d-pad maybe movement would be easier

Developer mobadu December 19, 2015 It stops walking when you tap on stop button. It’s right in the middle (the circle button with the “Stop” text on it).
Best regards

Developer mobadu September 6, 2016 Thank you! We’re glad that you like it!

Developer mobadu September 6, 2016 That game was created for players like you! Thank you!

Calinda Strayhorn December 10, 2015
How do you shoot I can’t shoot anything and I keep dieing because of no tutorial on how to shoot

Developer mobadu December 10, 2015 Keep tapping on enemy till it die. Tutorial shows how to shoot. If you need more help write to me: [email protected]
Best regards

Larken Xoxo June 21, 2016
I love this game so much it’s so much fun and ty for the extra lvls I give a five star for this! Anyone who’s reading my review and hasn’t downloaded this amazing game DO IT! AGAIN AWESOME GAME?

HOPE Channel July 18, 2017
My daughter loves this game! and we have no problem on my tablet, 32 GB, with games, but this one, it doesn’t have to even be on, it just being downloaded has my tablet acting crazy, the sec I deleted it, my tablet works normal again, please fix it, theres no other game like this, that I can find. Thanks

Developer mobadu July 20, 2017 Thanks for the information. However we didn’t encounter such behaviour as you described. Your tablet should be fine to run the game without any issue. Maybe there was some weird coincidence (Android devices sometimes go crazy). Try to reboot your device and download it again. If you have any issues write to me directly at [email protected]

Kamron Shuler April 17, 2016
it does not even let you play it probably depends on your phone, wont work on LG samsung, ZTE, DONT download and i am being serious

Developer mobadu April 18, 2016 It works with LG, Samsung and ZTE we assure you. Propably there is some issue with your particular phone model. We will check it.

Ejaz Ahmed April 16, 2016
The following user says thank you so much

Developer mobadu September 6, 2016 The following developer says thank you for playing and that review ! Best wishes!

Mario Digiovanni December 21, 2016
To many ads and every 9 secs it frezes

Akphack09 Rollon February 5, 2016
This is so very easy game its been so much addictive wow so addictive

Fouble Trouble December 21, 2015
This game is cool and its open world 5/5 stars deserve it

Developer mobadu September 6, 2016 We created this game for players like you! Thanks !

Developer mobadu September 6, 2016 Don’t be scared! You can fight them !

Marisela Rodriguez December 13, 2015
Addictive i love it keep up the great work

Developer mobadu September 6, 2016 That game was created for players like you! Thank you!

Developer mobadu September 6, 2016 Thank you ! We’re happy that you enjoy the game!