Embark on amazing adventures on a quest to rescue the Incrediballs!

Apart from an error that keeps popping up when buying stuff with in-game coins, the game is amazing. Super cool animations, incredibly detailed graphics, crisp sound effects, superb playability. Sometimes I think it would be even better with a controller because my own fingers keep getting in the way of understanding what’s atctually going on on-screen, but I suppose that would defy the purpose of playing on my mobile phone. 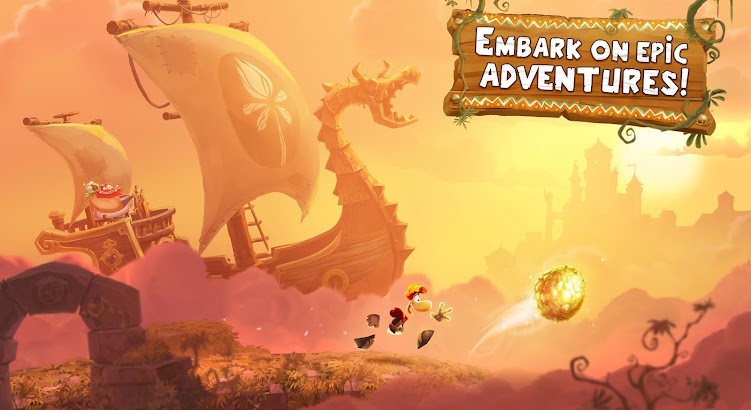 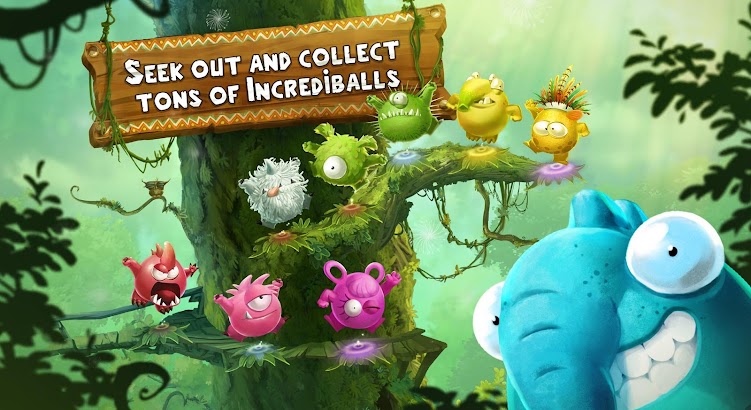 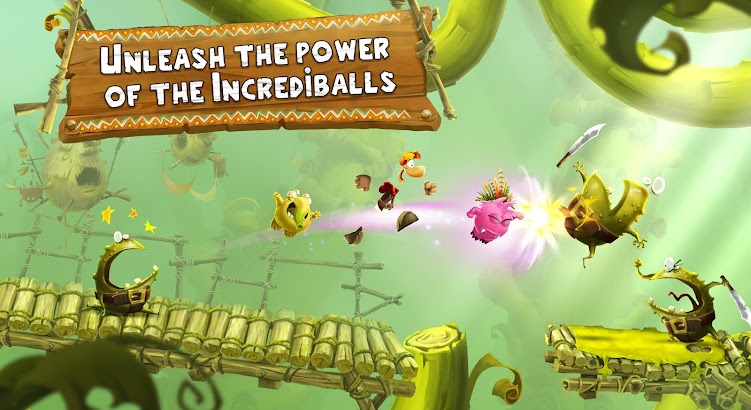 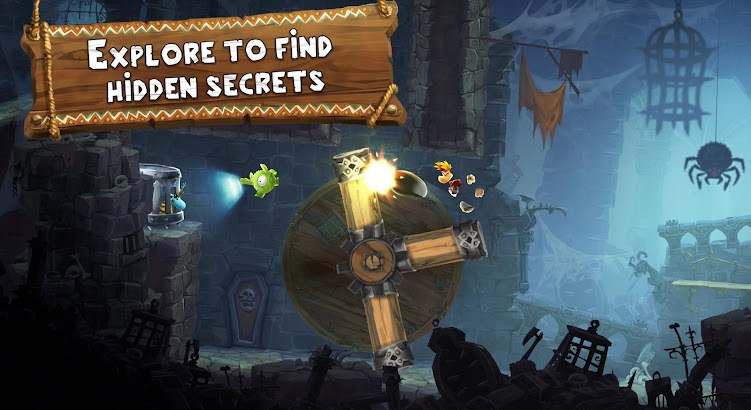 The enchanted forest is in trouble; the ancient eggs that sustain the sacred tree have been stolen and scattered across the world.
Embark on an amazing adventure through legendary worlds to help Rayman and his friends rescue the Incrediballs’ eggs to breathe new life into the sacred tree!

FEATURES
· Experience an exciting mix of ACTION and EXPLORATION.
· SEEK OUT and COLLECT all of the Incrediballs and bring them home.
· Unleash the POWER of the Incrediballs to conquer epic adventures!
· CARE for the Incrediballs: feed them, play with them and even MAKE MUSIC together!
· GROW the tallest TREE in the world and soar above the COMPETITION!
· Set off on a gorgeous adventure with AMAZING VISUALS and CONTROLS!

Jump into the action and battle minotaurs, bandits and many other monsters in Rayman Adventures!
Journey through various mysterious lands, haunted medieval castles and the mythical worlds of Olympus and unravel their hidden secrets!

Ahoy Adventurers! Gear up for Raybeard’s Treasure Hunt and rescue the all new fin-tastic Chompers family! Collect hidden Doubloons and exchange them for Jolly-Roger Tickets, Sunken Eggs and the Exclusive ‘Raybeard’ Costume! Update your game today and hop aboard this exciting adventure!
We’re on Facebook! Follow us on Facebook.com/RaymanAdventures for exclusive sneak peeks, fun contests and more!

Stefano Lacchin September 16, 2017
Apart from an error that keeps popping up when buying stuff with in-game coins, the game is amazing. Super cool animations, incredibly detailed graphics, crisp sound effects, superb playability. Sometimes I think it would be even better with a controller because my own fingers keep getting in the way of understanding what’s atctually going on on-screen, but I suppose that would defy the purpose of playing on my mobile phone.

stevie Buckmaster October 5, 2017
Great challenging game. It’s super cute. I spend hours, sometimes days playing it. I have it on most of my devices.I first discovered it when we had it on ps2, ps3, and our Xbox 360. The controls take some getting used to here on my phone but, it’s worth it to me. Thanks for putting it on androids.

Rayfan013 September 14, 2017
Fun gameplay, good graphics, nice controls and a great platformer in 2D. And about the controls, the controls work surprisingly really well! Playing with touch controls is so much better than other freemium games, cause I’m sick of playing freemium games with a virtual on-screen controller, because sometimes I’m holding a direction (like left) on the screen and it doesn’t recognize it, which makes a lot of freemium games unplayable. Yeah, touch controls have flaws too, but it is much better than virtual joysticks. Really addictive as well! I really recommend this game to anybody who’s a Rayman fan, or to the people who like platformers. Overall, this game is awesome, and it’s definitely an opportunity not worth passing up.

marcia delreal September 29, 2017
It’s impossible to get the latest set (sharks). It only allows you to collect coins on adventure map and at the tree.??? Usually there is a game you play to earn the eggs??? HELP PLEASE

Mobile Personalization Tips October 17, 2017
What can i say about game, it is just awesome platform adventures game i have ever played. I got addicted to its adventure. Hardwork is the thing i felt while playing it. Awesome work developers love u. ?

Amber Jones September 14, 2017
So, I enjoy the game but I made a purchase earlier this week but although it said ‘Payment failed’, I was still charged. Contacted someone online via the Ubisoft chat but I haven’t received what I ordered, nor have I been reimbursed. Pretty annoying stuff.

DerpMurphy Oof September 18, 2017
After playing Mario Run, 2D autorunners had a bad taste in my mouth. However, this one does it RIGHT. I still am unable to believe that I’m playing this on my PHONE and not my Switch. The controls are simple and responsive, the visuals, performance, and sound are out of this world, the game is packed with features, and the microtransactions are done right, being options to boost your gameplay instead of walling off content. This is the most quality I’ve seen, and will probably ever see, in a mobile game. Thanks Ubisoft, at least you know how to make phone games.

haricharan rudragada October 17, 2017
Game and graphics r great, controls on phone are a bit problematic in some levels. Main problem is that I’m stuck in one level where after finishing the level, rayman is disappearing and I’m left with that fat guy n nothing happening.

Grayson Wells October 19, 2017
Loved rayman Legends on the Wii U, this is no exception this game is amazing the only problem I have, are with the controls. They’re simple but not effective as Rayman will always continue running never stopping and if you want to stop and think about you next action or how for you want to jump, you have to change your direction and run back and forth. Otherwise, this game is amazing and is a Delight to play.

chica fnafmlg October 1, 2017
I have played Rayman since i was 4 and I’m 13 now and I still play the old one on my Xbox one Rayman 3 it’s amazing I also play Rayman legends on my Xbox as well I would give this over 5 stars thanks xoxo xoxo

Ziya Khan October 4, 2017
Game is awesome but the advertisements are irritating that’s why I’m giving 4 stars. And when I try to select the ad for getting 10 gems it doesn’t work and freezes there. It only allows to get 5 gems.

Lisa Perlmutter September 21, 2017
Love this game but I keep getting the same error message at the moment. It’s error 0.03010481and it says “an error has occurred on our servers”. Help, it won’t let me continue.

Lynn Knight October 21, 2017
Won’t let me collect any coins they have all just disappeared. Wonder why? Can you help?

Yunior Cheetain September 25, 2017
I’m hook up with this game since last time I played everything running cool so far just sometimes when I beat a level and touch the fast forward the game freezes but the character’s are still moving so I shut it down and restart the game but other than that nice work I would like also to see more levels and more diamond collecting instead of 3 or 6…

Hita Gauri September 24, 2017
Awesome gameplay. Awesome graphics. Good controls. Heats up the device in few mins. Lags a bit sometimes which needs to be fixed. Otherwise, a MUST DOWNLOAD game.And yes, if the adventure expires and I miss few levels. Does it mean I would never ne able to play that level again.

Anamarija Stojkov September 23, 2017
Hi i really love this game but i cant play it anymore because i am in the adventure and in one level where i have to fight with the enemies there is one point in level where enemies are not coming out anymore and i cant finish the level.

Kim Stone September 27, 2017
What is not to love with Rayman? You have good guys versus bad guys, adorable creatures and hidden treasures. I may be 55 years young but this never gets old.Need help from developers. Unable to get new eggs to hatch. Whenever they go to the tree the app closes.Even when it’s to visit the tree without a new eggs the app closes.. Help. ITS BROKEN!!!

Rhonde Brathwaite October 3, 2017
So worth the game play, log in everyday to play, controls can be tricky but easy to use. The gives out daily bonuses, but the more you play the more gems you get.

Ravindra Maurya September 29, 2017
This is a cool game. But the level of system was so boring

Mack Daley September 18, 2017
The only problem is that some of the hidden coins are impossible to get in some adventures because they’re right next to other buttons.

Chris Bell September 26, 2017
Swipe up to jump!!! It would be a far more intuitive control system. As it is it is a needlessly frustrating experience.

Likes De Vera September 19, 2017
I never write reviews but I gutto say this game is so addictive, the gameplay is so good! I could play this for hours

Kristen Kern September 28, 2017
I cant beleve a free app and one on my phone has spectacular graphics control response and over all addictive fun!Bravo?

Oscar Gonzalez September 18, 2017
When I got the same increaball my flower grows then it glitches and the tree starts shaking and kept on doing it and never stop please fix this i.im begging you

ideyorsy de la vega September 26, 2017
The game is crashing all time,I was playing normal,like 2 days ago,and then start to crash

Marius Duna October 1, 2017
You should put safepoints to start from on each level. Start from beginning o such a long levels are making game hard to play for a child game

Tony Gonzalez September 19, 2017
It’s a great game.Freezes up at times but over all a great game

Johan Heryanto September 22, 2017
Very addicted to this game, rayman is my classic favourite since childhood. Love the graphic!

Shubham Srivastava September 16, 2017
Best game i have played. Who needs a nintendo switch if you can play such awesome games on your phone!!!

Reza Aria September 25, 2017
Cannot connect to the server.. please fix it. I can’t open the egg in the third level. Every time I opened the game it’s always the same problems.

bw STUDIOS October 8, 2017
This game is very good probobly one of the best mobile games ive played but one thing ive been experiencing a glitch that randomly happens when i restart too many times on the same map i dont get placed where i am supposed to (usually out of bounds)or dont exist in the gameit can be fixed by another restart i am playing on the galaxy s7 so if you fix this i will rate this game with 5 stars

Thomas Hansen October 16, 2017
===UNABLE TO OBTAIN REMAINING INCREDIBALLS===As a diehard Rayman fan I’ve always enjoyed playing these types of games on any device/console.However there is a game destroying bug in Rayman Adventures which basically prevents you from obtaining all the Incrediballs.I have progressed alot through the game, but still have 4 incrediball families remaining.All that now appear on the adventure map is regular Surprise Eggs. Many other users on the Ubisoft Forums also have reported having the same problem yet this bug still remains…I would rate this game a good solid 4/5 stars if you allowed users to progress further and complete all the families.Please Ubisoft fix this issue!!! It should be Priority 1 on your developers list to fix this in your next update.

Sara P September 16, 2017
Game keeps freezing after I open an egg… Very frustrating. Won’t let me move on from the tree page.

Samuel Rodenbach September 22, 2017
Very good game definitely one of my favorite but some times it clidges if u want to hatch an egg but very nice!