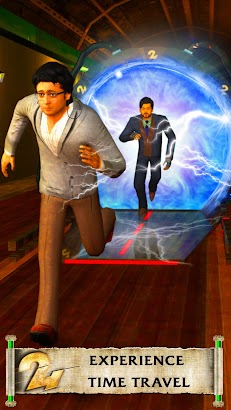 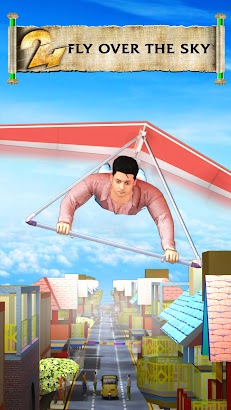 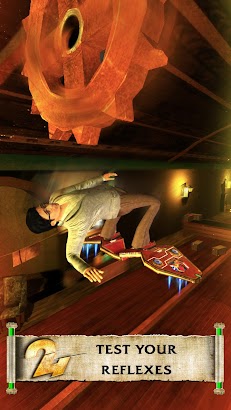 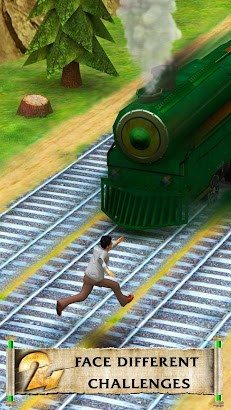 In this game there are 2 Missions:

Mission 1:
Help Mani (a watch specialist) to find and collect the 24 parts of a special watch to fix it. Remember, he will be chased by paraplegic Athreya, who wants to grab the watch! So you need to run away from him on the busy roads of Watch Maker Street and avoid all obstacles like Auto Rickshaws, Ice-cream vehicles, man-holes, barricades, Fruit stalls, ladder-men and blocking walls etc.

Mission 2:
Help Dr.Sethuraman (Scientist) to find and collect the Power Sources to charge Time Travel Watch. He will be chased by his evil twin brother Athreya to grab the watch, so manage to dodge all the obstacles in the laboratory, secret tunnel and railway track. Keep an eye on the health bar and before your health drains charge the watch to 100% and do a time travel. You can travel back and forth between two time periods and can play as both Mani or Dr. Sethuraman.

Note: Travelling through the time vortex will recharge your health to 100%

Do not miss a chance to collect Gliders, Hover boards and Shield Power-ups to have more fun!!!

Satheesh Kumar January 11, 2017
Good Graphics….You have many interesting scientific missions to complete….You won’t get Bored…Just Download it I am Gurantee that then you will love this game sooo much…Make sure that your mobile/tablet/tab has enough storage space other wise the game will show some errors….Before Playing the game if you didn’t watch the Movie- ’24’ watch it now itself…..Actor Surya’s Thiller Time machine Tamil movie……I am sure that after watching the movie you will become the Die hard fan of Actor Surya….

HARI KRISHNA June 2, 2016
This is superb game i have seen in my lyf but mission 2 is very hard to play any way this game superb and im a fan of surya in kollywood

Anand Gopi May 18, 2016
Great graphics and superb idea… keep it up… But u could improve the man hole things and sethu’s laboratory its too complicated… anyhow this is a fantastic game to me… Aayushman Bhava.. tq

Sai Teja May 25, 2016
Animation and graphics are very impressive by it strucks very much.. irritates very much when having important moves. Please fix this. Try to minimize the app size so that it runs easily.

lathaveerappan lathaveerappan September 10, 2016
This game is better than Temple Run. Very challenging and not easy to move on. Amazing graphics from level 2.

Rani Vijay March 4, 2017
Actually, my daughter is a fan of suriya in Tamil. But this is cool game for my son and daughter!Animations can be fixed. Apart from that ,everything is pakka!??????

Siva Kumar April 20, 2017
I love this game so much, they have done so much hard work .A small request from my side that this game graphics can be improved ,I am waiting for the latest version of this game and improve The story like 24. Additional features​ can be done Thank u

Veeresh Dce June 1, 2016
I love android apps or games.. i had given 5 stars for.. encouraging my indians.. app developers are from tamil nadu.. i wish a very gud luck to creative monkey team company.. plz develops apps like this.. highlight graphics.. but slow in 1gb ram phones.. need to reduce game code.. and increase speed..

kumaresan nadarajan May 31, 2016
with a lots of missions the game is very good.the graphics also are damn good. as i love surya i will play his game eventhough it is worse but this athreya run is really amazing.It is only quite slow when started

Sudheer Raj August 2, 2016
I have completed the first one and the second part doesn’t responding to load and the screen comes out Without any bug report. Could u fix the problem….

Krithik Ravichandran June 3, 2016
Good game with good graphics.I have just finished mission-1 yesterday and went to mission-2.The part of mission-2 is stuckingvery much.So pls fix it.In the other side the game is very good and I love this game.Thank You.

Vini NV December 23, 2016
The game itself is good but while playing the graphics and the game don’t match with the action (touch and swipe) causing the player to fail. Overall it would have been good if this responding section was working, the rest is fine.

abhishek ashwin October 2, 2016
It’s same d temple run which is made into athreya run…. It hangs alot once u progress… But reminds u temple run evnthough d concept is different… Overall it’s Average and whn does d game end????

reema kosa July 30, 2016
It is very hated game of my tab. It is not getting updated. I will not give any star to this game.

Mullagiri Manaswini May 25, 2016
But same run evrytime…if it could hav much more other levels other than chasing it would hav been better…but as of nw its wonderfull!!

anandh jayakumar June 1, 2016
The graphics is not responding immediately to our actions especially when we get a watch, diamond or need to make a important move to avoid hit the object. While starting it takes around 15 second to run till then only loading n bgm with arthena following. Poor graphics. Need to improve lot.

Vigneshvar vicky February 14, 2017
How does the game ends I had been running for a long time please do help me guys

seelan jenu May 25, 2016
I think there should be more missions cause after awhile the games gets abit boring

Pratieep Naidu June 3, 2016
To the dev, how do i attain the last 3 achievements which are unlocking the hoverboard and glider, and fully charged the watch? I’ve been trying playing it after finished mission 1 for long time but still cant be unlocked. This game could be broken and need patches, so please update it. Thanks…

kosi gopi kosi gopixxc December 16, 2016
I collected all 24 parts and unlocked sethu but when i try to play 2nd mission it doesn’t even open. But graphics are good. And others are also ok. The graphics deserve the 3 stars. I would give 5 stars if you fix the 2nd mission problem

sri priya September 28, 2016
I thought it must be boring but it was awesome , superb , fantabulas , very nice , great , and i just loved it and i think that the people who were fond of this game will be very good surya fan

Aryan Astro August 27, 2016
I collected all the parts of the watch…. After unlocking level 2 the game stopped working….even level 1 is not working.I really got disappointed…It does hurt me…any help??

Naveen Kumar Reddy July 8, 2017
Good game.i love it.but in mission 2 when we die and restart the game we have to charge the watch from the first it is so difficult.so please change that like in mission 1 if we die we can collect the parts from where we stop.

Drk Balachandran May 28, 2016
This is an awesome game and it has good graphics. But some body please tell me how to finish the second mission. Otherwise it is just an awesome game

Sricharan Saravanan May 28, 2016
Its a good game with a good concept way better than the anjaan game, it’s kind of slow though probably because my phone is slow but other than that it is a good game

Greeshma Murali May 29, 2016
Mission 2 isn’t working… Even it works,lot of irritating lags so can’t play even a single step…Plz fix it…

UnknownApril 26, 2017
Superb game….As compared to Anjaan game it’s superb…But this game is somewhat difficult to get into in the next level…. Anyway I loved it…And also I’m a die-hard fan of Surya…So this game will be a great gift for all Surya fans …..

mamta singh January 29, 2017
I loved this game. The most important thing is that it is based on my favourite movie. This game is very awesome, fantstic,super duper adventures.But I have completed the mission 1 but mission 2 is not starting. Why? But seriously I loved this game I am a great fan of Surya.☺???

Akhil Abhinay May 24, 2016
SUPERB GAME I REALLY LOVED IT FANTASTIC GRAPHICS AND LOTS OF MISSIONS NICE GAME TO PLAY IF U ARE BORED

Suresh Babu August 25, 2016
Awsome and best . Time travel is cool . But in mission 2 , we are charging the watch going to the past and again from there charging and coming to the future. Again again doing the same thing . What a silly mistake.

Vaishali Rajendran June 28, 2016
Am a big Surya fan I rushed to download the game when I heard about this game. But am totally disappointed. It is not getting opened. Always showing this game is unfortunately stopped. Please someone give me the solution. Am very eager to play the game.

Digvijay Bambal March 14, 2017
What happens after clicking the “fully charged” power source? Nothing …! It just says fully charged… But the game achievement doesn’t get updated… WTS? Work on it, plz!

Sravan Kumar June 2, 2016
I have completed 2 missions and now I am getting bored of playing the same level, so in next update add more mission levels

skraj 007 July 23, 2016
Graphics is good, but only worst about this game is some times jumping and sliding down simulations are not working, which made be feel bad, subway Surfers works perfectly in my phone. Please solve this problem
Tags
CREATIVE MONKEY GAMES & TECHNOLOGIES PVT LTD