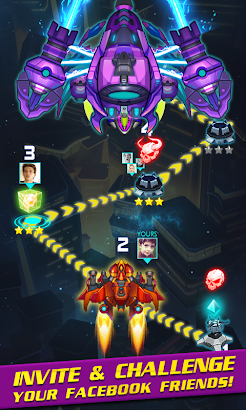 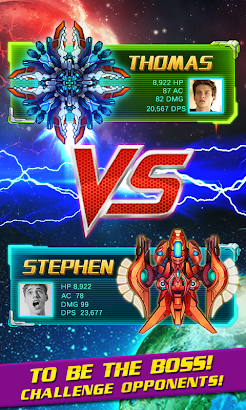 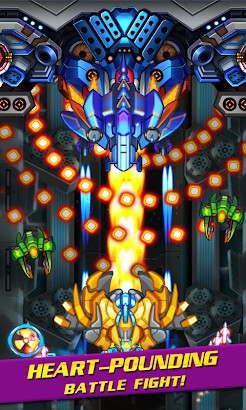 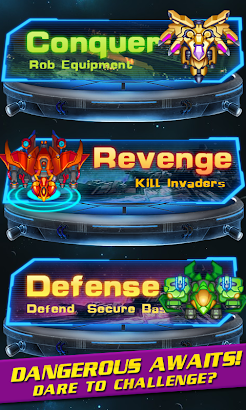 what shooting game will you play in the coming 2017? Aircraft Shooting Combat a classic Raiden Barrage shooting game with Innovative gameplay and stunning raiden barrage. Join the league of Galaxy , become the sky force commander to protect the earth. Drive the most stunning aircraft in hangar to combat with the evil empire. lead your Squadron to join blitz barrage and win this space battle.
Aircraft Shooting Combat is The cool & exciting shooting game, and has powerful barrage effect with diverse missions to complete, To be a hero pilot to save the world, fire and shoot missiles to protect the galaxy in peace. Memorable battles with enormous bosses will make you highly addicted to. Still, this game continues the classic of fighter plane game and filled with funny, which brings much flight shooting experience to players!
Of course, it is hard live in this “bullets hell”，the evil galactic empire maybe much stronger than your imagine，but the 7 coolest fighters is your backing.the justice alliance will also provide hightech to help you！control your fighter,Travel through the bullets in space battle. and feel the bullets whizzing by. help us，please!
The Earth Federal Organization is the highest clandestine organization responsible for protecting people’s life and securing all kinds of information of the earth. One day, a mysterious organization from outer space carried out a terrorist attack on the Earth Federal Organization. Luke, the Ace pilot and Anna the outstanding analyst know that this is not just a terrorist attack. As expected, the mysterious organization stolen a secret file from the federal institute in the chaos. The Ace pilot Luke together with the New Holzer Army is asked to fight against the enemy and find back the secret file. They are trying their best to stop the secret file from being leaked. But the thing is the action is well prepared and well planned for quite long time. When tracking down the enemy, Luke and the New Holzer Army encounter all kinds of traps. The enemy set traps like Gravity Ambush, Puppet Army to extend the time for the reason of being caught up by the Ace pilot Luke. After overtaking so much troubles, across through Bergen Galaxy, arriving at the Ruf Planet, Luke finally detect the powerful mysterious organization called Red Snake. Then Luke find a mysterious crystal. What is crystal used for? Why they steal the secret file and what they are gonna do?
May be you have tried other STG shooting games, but Aircraft Shooting Combat, the latest STG flagship version, can offer you real shooting experience that you never had before. So what do we have?
● Rampage aircraft
● Sophisticated HD graphics and thrilling shooting effects
● PVP system offers real experience to fight with players
● Unique upgrade system
● Dragon, White Tiger, Suzaku, Basaltic, Blade of Hell, Milano advanced fighter and so on.
● Full voiceover & incredible electronic soundtrack.
● Endless fight mode, fight with the palyer all over the word

Get ready for your device getting hot and your finger getting sore!

Carol Hicks August 7, 2017
DON’T WASTE YOUR TIME AND DATA WITH THIS GAME IT’S TERRIBLE AND NEEDS SOME MAJOR IMPROVEMENTS IN ALL AREAS OF THE GAME

carll kenneth maraquio August 1, 2017
Said they have the challenge or pvp but seems its only an arcade mode

Amazing Funny Videos September 16, 2017
Beautiful game, but it so lag on my s8

Ann Alvarado February 25, 2017
ITS BAD NOT FOR KID CAUSE BAD WORDS

UnknownDecember 29, 2016
I wanted this game but i can’t download this app please help me..

Alberto Borata November 16, 2016
I do really like dis game

meena goel July 13, 2017
Slow game back to back home page in this game