simple, but limited fun This game had me spinning around having fun. Controls are nice. Simple concept , but it doesn’t draw me in. 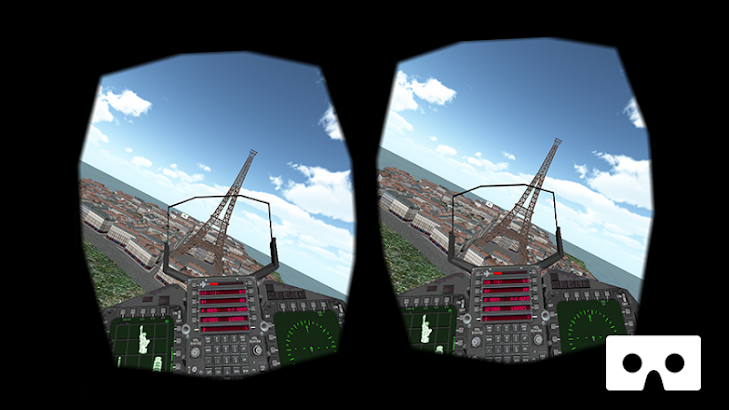 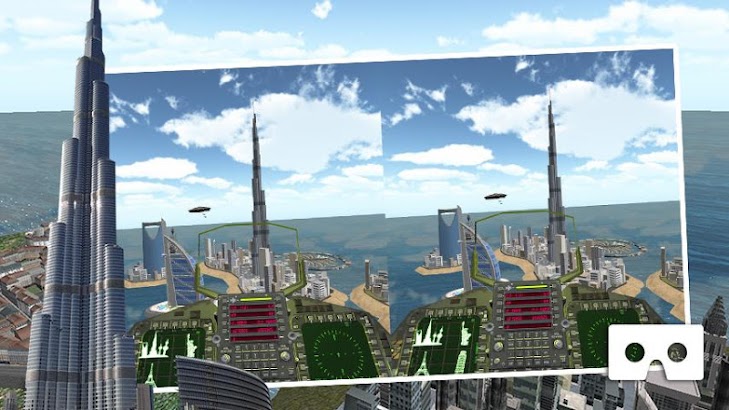 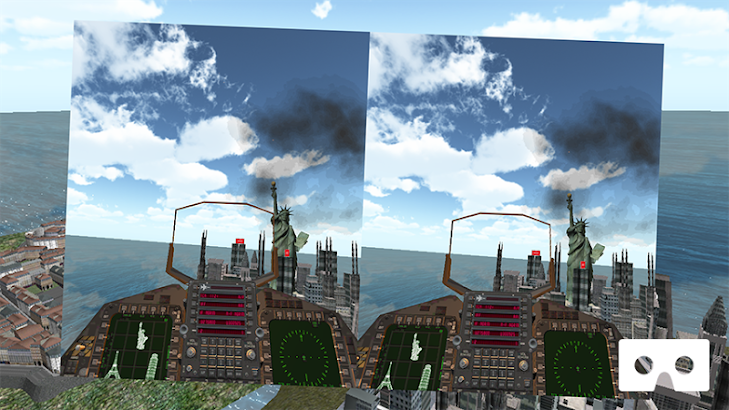 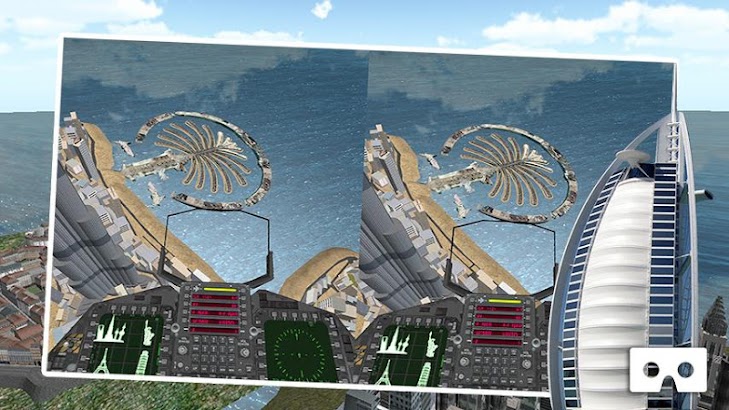 Using Google Cardboard Virtual Reality Kit, you can fly to the skies with your F16 and shoot down every Alien UFO as they are intent on destroying our beloved cities.

Use the VR viewer to Play and shoot the flying Aliens UFO. Shoot the Aliens UFO as they fly over our beloved cities and stop them from invading us!

– A Full 3D Experience and head tracking for mobile VR.
– Realistic Incredible graphics that create a real atmosphere of Paris, Pisa and New York.
– Easy to use controls
– Compatible with Google Cardboard

Your Fighting skills needed to save our beloved cities from Aliens, who wants to terrorise Earth. Show the World your Strength and Save it from the unwelcome creatures.

Check out our latest updates & News on our Official Facebook Page:
https://www.facebook.com/maysalward

We Love Reading your Feedback unless you are an Alien for your safety don’t approach.
Join us on Twitter and Tweet about our VR Games: https://www.twitter.com/maysalward
Reach us on our official website: https://www.maysalward.com Twitter: @maysalward

Share your experience with your friends and always #maysalward

George Garman November 1, 2016
This game had me spinning around having fun. Controls are nice. Simple concept , but it doesn’t draw me in.

Jiří Fiala January 6, 2017
The plane should be controlled by gamepad, not by sight. Would be much better then.

Developer Maysalward January 6, 2017 Thanks for the comment and feedback . The team is working to enable controller this year in Aliens Invasion .

Felicity Zeeman January 21, 2017
Pictures were going round all the time.

Developer Maysalward January 28, 2017 Hello. Are you using a Google Cardboard to Play it? This is a VR game that requires a special device to play it !

Grant Schwartz June 24, 2016
Shows video adds when the games ends. I played 2 rounds and it used 16 mb of data. The targeting is finicky and it’s hard to lock on to the aliens. I do like how you have to avoid the buildings though.

ashley kenway July 11, 2016
Could do with being more difficult but great control

Yasser Jaffal January 10, 2016
The experience was very bad on my device. Even with the nice graphics the game is not playable due to glitchy head tracking (look right or left suddenly). I wonder if cardboard SDK was used to develop it since it is not detected as cardboard app — it does not even prevent phone display from turning off while playing!

Christian Ewertsen January 19, 2016
Great game and really cool concept. Nice graphics too. ? However, on my unit the head tracking is also completely off at first – but after insisting to play it for a few minutes it kinda “settles down” and the game becomes really easy and fun to play!

Developer Maysalward August 3, 2016 Thank you for your comment and your note, hope you enjoyed playing the game…………… for more games and updates, visit: https://www.facebook.com/maysalward/

Jules K March 3, 2016
Aside from the nice graphics, on my Galaxy S2 the head-tracking did not work properly making it impossible to control. On my Nexus 4 head-tracking did work, but I was not able to shoot or do anything except “flying” around. Speaking of flying, the cockpit is actually just a frame, the plane follows your headtracking without any inertia, feels weird.

Developer Maysalward August 3, 2016 hope your issue was fixed in the new update??

shannon Turnbull April 6, 2016
This game won’t let me shoot at aliens or anything. I fly around until they shoot me then I die what am I doing wrong

Developer Maysalward August 4, 2016 Hi, We tested the game in same your phone and there is no any issue. make sure that your airplane target in the aliens spaceship.

Dark Western February 22, 2016
Was nice sending aliens back to hell and all, but this one alien got past me, and I had to look all around for it…because the ship was faster than me, I had no way to catch it!

Developer Maysalward August 3, 2016 Thank you for your comment, and we will take look at your note.

Developer Maysalward August 3, 2016 make your target on the aliens spaceship, and it will shoot.

Developer Maysalward December 28, 2016 Thank you and hopefully the upcoming update will be also upto your expectation.. stay tuned coming soon

Moath Qwaqneh September 1, 2015
Great fighting love how to shoot a UFOs to save the earth ?

Ali Noufal September 2, 2015
Like it … nice experience with VR and Nice game …

Brian F May 29, 2016
Works great on my phone.I don’t know why it won’t work for you guys.But there is one problem.I can’t frieckin shoot.It is just like the roller coaster called revolution where you wear virtual really goggles.But that ride is way better than this crap

Rupert Cadbury October 20, 2017
There’s no plane, but the image of a cockpit stuck to your face. I cant find one flight sim that has good graphics, and controller use. everyone out there has some horrible flaw. No controller, poor graphics or total spam fest. Where’s a good vr flight sim I’ve tried about ten and aint one of em can do it right.

Developer Maysalward October 22, 2017 Welcome Mr. Cadbury
It is our pleasure that youtried our game, actually we are working on Virtual Reality experience. Our game is good enough in the flight simulation world and it has a lot of satisfied users, but we hope to improve it more by your reviews and your support
stay with us
Best regards

UnknownDecember 28, 2016
The plane rotates as fast as you rotate your view, which makes it feel like a toy plane. It flies at a constant pace and graphics don’t give feeling of speed.

Developer Maysalward December 28, 2016 Thank you for your comment and follow up. The team is working on an update that will come soon hopefully the controls will be much better. Also we are planning to have this game on Google DayDream soon.

Mark Jensen October 29, 2015
VR games this far are more like VR demos, which is why this is my fav game this far.Graphics are PS1 old-school but the play aspect is actually quite fun.Best use of VR format in gaming.

Mohammad Khater August 4, 2016
I like the concept of the game but i also think that it needs some improvement. I think that More levels will add much more to the gameplay .

Developer Maysalward August 4, 2016 We will check this in the same your phone, please reopen the game and move your head around again, and you will find “New Game” button.

Vaibhav Pancholi April 26, 2016
I have start and put in vr so not working and cras

Developer Maysalward August 7, 2016 after you wear the VR cardboard move your head around and you will find “New Game” button make the target on it and you will start playing.

Developer Maysalward August 4, 2016 If you have a real purposes to say that, please write it and we will make it better.

Developer Maysalward November 10, 2015 Thank you for your comment.
Join us: www.facebook.com/maysalward

Developer Maysalward August 3, 2016 because your device does not support VR

Developer Maysalward December 28, 2016 Thank you and we are working to launch a new update soon with new Graphical Enhancements.