May the birds be with you!

This game is amazing and is fun for the whole family. Me and my daughter play it all the time together. The yellow bird, chuck is definitely my favorite. Chuck is also the best looking one. Everytime i think about my wife cheating on me or my terminal cancer, chuck always gives me a boner. 5 stars. 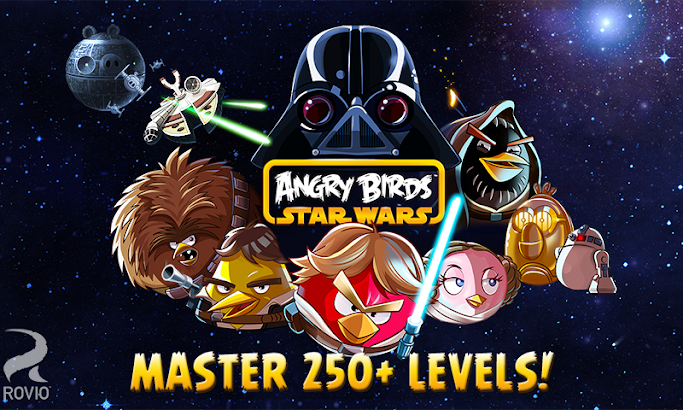 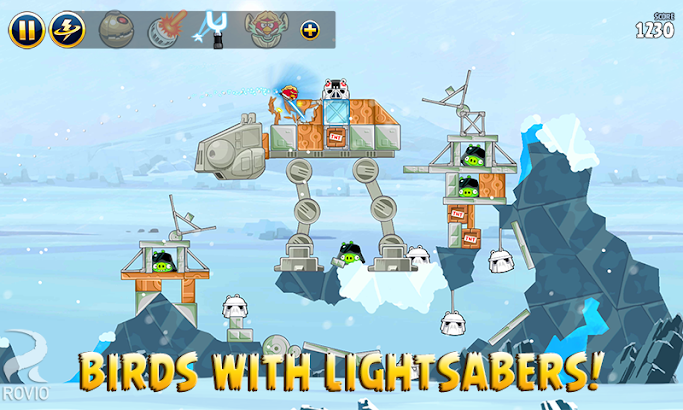 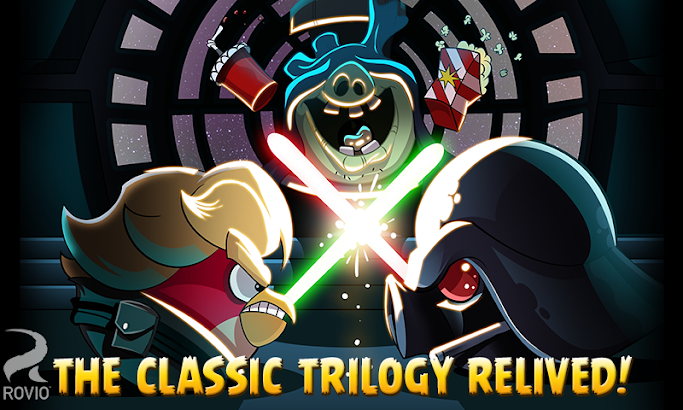 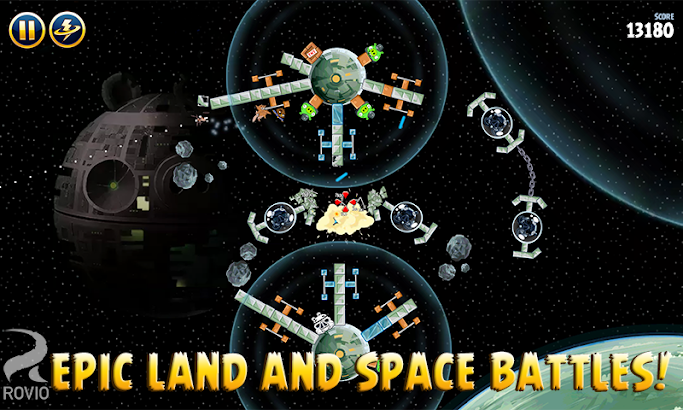 JOIN THE ANGRY BIRDS IN THEIR BIGGEST ADVENTURE YET!

A long time ago in a galaxy far, far away… a group of desperate rebel birds faced off against a galactic menace: the Empire’s evil Pigtroopers!

Rebel birds, striking from a hidden base, have won their first victory against the evil Imperial Pigs. During the battle, Rebel spies managed to steal secret plans to the Empire’s ultimate weapon, the PIG STAR, and are racing to deliver the plans to the Rebel Birds. Now they need your help!

Join an epic adventure with the Angry Birds in the legendary Star Wars™ universe! Use the Force, wield your lightsaber, and blast away Pigtroopers on an intergalactic journey from the deserts of Tatooine to the depths of the Pig Star — where you’ll face off against the terrifying Darth Vader, Dark Lord of the Pigs! Can you become a Jedi Master and restore freedom to the galaxy?

Time to grab your lightsaber and join the adventure! May the birds be with you!

HOURS AND HOURS OF ENGAGING GAMEPLAY – Explore more than 200 levels in iconic locations like Tatooine and the Pig Star. Can you dodge Imperial pigs, laser turrets, Tusken Raider pigs, and the dark side of the Force to get all three stars?

NEW GAMEPLAY MECHANICS – Use lightsabers, Blasters and Jedi powers to wreak havoc on the Imperial Pigs!

LEVEL UP YOUR BIRDS – Keep playing and level up your birds to improve their skills!

SECRETS AND HIDDEN GOODIES – Can you unlock all the R2-D2 and C-3PO bonus levels?

THE MIGHTY FALCON
Stuck on a tricky level? Earn stars and call the Mighty Falcon to rain down the destruction. New goals, achievements and gameplay!

PATH OF THE JEDI
The ultimate training ground for a Young Jedi, this episode features 40 Dagobah Challenge Levels with Jedi Master Yoda! Master the Path of the Jedi to unlock the ultimate Lightsaber! Available as an in-app purchase, or by earning three stars on every level.

This application may require internet connectivity and subsequent data transfer charges may apply.

Watch the videos, read the comics and submit fan art at angrybirds.com/starwars

This game may include:
– Direct links to social networking websites that are intended for an audience over the age of 13.
– Direct links to the internet that can take players away from the game with the potential to browse any web page.
– Advertising of Rovio products and also products from select partners.
– The option to make in-app purchases. The bill payer should always be consulted beforehand.

We used Jedi mind tricks to fix some minor issues and give you an even better game experience! Thanks for playing, and may the birds be with you!

CokeFreezyBreakfast June 21, 2017
This game is amazing and is fun for the whole family. Me and my daughter play it all the time together. The yellow bird, chuck is definitely my favorite. Chuck is also the best looking one. Everytime i think about my wife cheating on me or my terminal cancer, chuck always gives me a boner. 5 stars.

Johnnie Ipock July 19, 2017
There is one ad that won’t play, (something about scars and plastic surgery), the screen just goes black and you can’t go out of it without closing down the game. Too frustrating. Uninstalled.

Jeffrey Jenkins July 4, 2017
Way too many adds. I understand they need to make money but they are being greedy now. Uninstalling.Don’t install unless you want to send more time watching adds then you will playing the game

GTJ July 22, 2017
I think the start wars these is it’s main pro point. After that I feel it isn’t that good. I’m using a 3 week old Samsung Galaxy S8 and this game crashes very often. The screen zooms itself in when I’m trying to sling the birds. I loved the original Angry Birds. It’s hard to pin it down but I just feel they spent more time on the beginning/theme of the game than the actual game play. But I’m not an expert so give it a try. Decent for a free app.

Amani Dr Doys June 12, 2017
It’s so cool, (Samsung Galaxy Tab 4) I loved and five stared it. But you guys should make a game named Angry Birds Build and in it you can build the pigs houses and when you done you can try to beat it

Steve Brown June 11, 2017
Adverts are ridiculous, I don’t mind a few as this is how money is made for the software companies but they are constant.Don’t waste your time as there are plenty of other games available.

G Garrison July 17, 2017
Latest update = way too many ads! Occasional ads are expected, but what happened to playing this fun game without having to watch ads until you can skip them? And a lot more often than any other ads before this?

UnknownSeptember 19, 2017
Superb game guys you all should like it, i completed it in 3 days , i am a fan of it!!! and thank you all but punish them who insulted the game bye bye

Jacques Breitenbach August 22, 2017
You guys cant be serious!!! Great game but for every minute you play there are 3 minutes of adverts.Did someone make a mistake?Who in there right mind would play this game?????????

Sarah Protas October 9, 2017
Awesome game.. But 30 second ads after every single level make it not worth my time. Get it together rovio. You make enough money without the barrage of ads.

Kim Zarcone July 8, 2017
Ads are OBNOXIOUSand ruin an otherwise fun game. I’m willing to pay for ad-free, but for some reason I wasn’t able to make the purchase.

UnknownJune 9, 2017
One piece episode 519 english and the other hand that the company can be used in a a way that the most important thing in the future and will have to go to a new job in a similar position in a new window to go to a new place

Kevin Jefferies September 16, 2017
Rovio has removed all the ‘no ads’ versions and if you bought several, as I did, Rovio has violated the purchase agreement. You can prevent ALL ads, at no cost, by disabling data when you play. All Angry Birds games are now completely unplayable, AND consume great amounts of data AND battery. I now refuse to spend any money on any Angry Birds products, from toys to movies to apps because of Rovio’s unethical and likely illegal business practices. Ironically, I do think the games are worth as much as $20 plus more for all the expansions and additional content continuing development…WITHOUT ads, of course. The games are likely in a death spiral now as people refuse to play with ads or circumvent all ads by disabling data when playing. This is an excellent example of utterly incompetent business management and total lack of concern for the customer experience. It will be a great opportunity for someone with the ability to buy Rovio out once they bankrupt themselves, and for a fraction of the true value of the property.

Sonja Woodard July 10, 2017
Well angrybirds 2 is the best game in every way because all the different posssabilites you have to gain ammo in all ways . It makes the game interesting and u never get tired of it.however starwars is fun also.

JOHNY ANDESON July 19, 2017
I m the fan of it as I was finish this whole game 7 times Andthis is my 8 time . I play this gameany times but can’t getting bore Thank u

CAM OVERPOWERD 10 August 28, 2017
Hi on my old phone which everythingfrom my old one to my new one I payed for the Jedi path and the other one that is 0.99 I don’t have them anymore so can you guys give them back to me and I looked at my payments and it said I payed for them

Aninda Majumder October 6, 2017
The long a day when angry birds star wars is there you have a levels 1 to 400 but if 250+more have levels and are play 360 levels and after playing you will win and 4 minutes playing and you win just and 2 minutes and you will be win all levels when you are uninstall then gain install okay bye see you next time

UnknownSeptember 7, 2017
Too many ads, slows down the pace of the game. You pass a level then boom you are FORCED to watch an ad saw 10 ads within the first 3 mins of gameplay, sucks

melanie Bishop July 5, 2017
More ads than ANY game I have ever played. It is ridiculous! I would rather just pay for like I did on my surface.

Matthew Clark October 7, 2017
On top of a very poor game play, there are ads every 2 minutes. Horrible game.

Carter goodyear vlogs and games August 30, 2017
Was this made may 4 cause u know may the 4th be with u XD LOL also thanks for adding more levels im excited to play them O LOVE THIS GAME SO MUCH but not my favorite great time killer but in tence because when u have 1 more bird and 1 more pig to kill and u miss its annoying but fun game

andy ivon June 24, 2017
Too many ads pay pay pay you cant go with out money pay pay pap all you want is money stop showing us ads about pointless stuff im not going to buy it!

Butch Chops June 28, 2017
The option to remove ads isn’t available, it’s only 99p which isn’t a big deal and I’d be happy to pay. Now I have to watch adverts for hot singles in my area every three levels.

Mike Brittain May 30, 2017
I liked the difference in gameplay until the third stage. (Yes 3rd)… Then I saw so many ads I forgot to play the game…

Troy Jenkins October 3, 2017
I understand having ads.There are basically two ads between each level.You spend more time navigating through the ads than you do actually playing the game.

Michael Becker May 28, 2017
The fact that I put this app on mute only to have loud annoying overly repetitive adds makes this game suck!

Devan H June 17, 2017
Could not even get to the game, before some lady came on in a picture video about another game that has nothing to do a angry birds..

A Google User September 14, 2017
The ads are now ridiculous, 30 seconds of watching something I have zero interest in, that is bonkers

Matt Powell September 1, 2017
Game good just too many adds takes to long to watch adds than play the game get rid of adds then ill install the game again

intro master5x October 5, 2017
Y’all should make a Marvel Angry Birds I don’t even like Star Wars but now I do so make a marvel angry birs

Aiden Cardenas August 9, 2017
I love this game it is so addicting and I like all the abilites and the milenium falcon. But I would’ve liked when you could use C-3PO and R2-D2 in the story missions.

Lm Jensen October 14, 2017
I like how you are choosing the levels in the planetsbecause you can have fun by tapping on the extra things that you see floating around

Ravindra Maurya July 28, 2017
This is a great game of angrybirds to a easy and effective not very time consuming have goodgraphics, good games play and interactive

UnknownSeptember 5, 2017
It is very good,challenging,addictive You all must download this game.If you rate this game you must give 3 stars to this game.

rayquaza the dragon Pokemons July 4, 2017
Games amazing loved it more then most of the other angry bird games keep up the great work

UnknownJune 19, 2017
Great game but the level of adverts is just crazy – 10 second ad every 2 levels of play is too much

Fairy Tail cool August 6, 2017
Cool but it took too long to stall like it took like 2 minutes psych no it’s ready fast