The Babybel® buddies are waiting for you to set them free and roll into action!

Cheese rolling fun. Don’t know why there’s one person saying you can’t control it: Tap the screen as per the tutorial and all is well. Great fun. Some of the fruit are hidden for a challenge but they’re all there, just get searching! I like Onk the Penguin. Funny little guy that one. Wak! 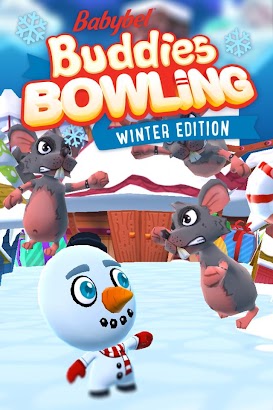 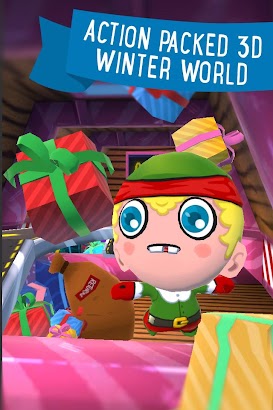 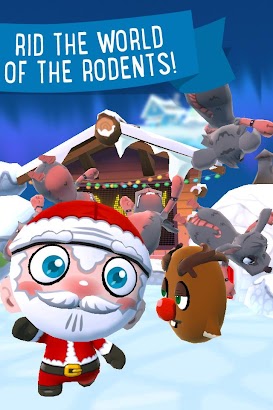 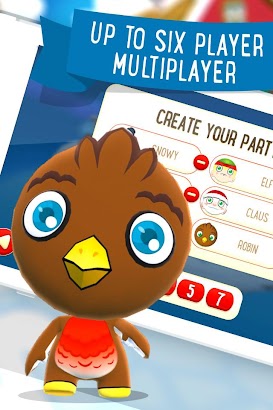 This festive season the ravenous rodents are back and they’re not here to play nice! They’re getting into your Christmas stockings, they’re eating all of the world’s cheese and they’re hell bent on ruining Christmas for everyone. Is there no one to stop them?

Meanwhile far, far away (well not that far, in your fridge actually), the Babybel® Buddies are waiting for you to set them free from their wrappers to roll into action and wreck the rodents’ plans.

– Scan the Mini Babybel® logo on the festive label to experience the 6, all new, Christmas Babybel® Buddies, Frosty, Onk, Dolph, Flash, Alfie and Noel and bring them to life!

– Brave the icy, arctic levels, dodging the giant baubles, discarded presents and snow tipped rocks and make your way through the evergreen forest to Santa’s Grotto

– Discover the hidden mystery fruit to unlock a secret character

– Grab the milk and collect the stars to unlock more levels

– Find the hidden treasures, unlock the secret characters, get to Santa’s Grotto and save Christmas!

Damien Sturdy November 11, 2014
Don’t know why there’s one person saying you can’t control it: Tap the screen as per the tutorial and all is well. Great fun. Some of the fruit are hidden for a challenge but they’re all there, just get searching! I like Onk the Penguin. Funny little guy that one. Wak!

Kit Smith December 2, 2014
For some reason I cant go off of the level bit although its very good but quite hard to control, could be made a little easier though.

Melody Melody December 5, 2014
This game is very ad, I would not get this app if I were you. On the advert it is great, in real life, its very bad!

monkey 85951 December 2, 2014
When you scan it does not work I really bad that never did Halloween and when it Christmas it will go of shef so do not waste you time down loading

Jorja Hand September 24, 2016
I love this game its so fun but annoying when you fall of and you have 1 go left

Rhomanie Pamenter December 24, 2014
How do I steer the babybel cause I keep falling off

Giovanni Ventimiglia December 6, 2014
Tried to play but fails to open.

Jessica Rumsby December 17, 2014
Found that it was hard to control and I kept falling off the side

john campbell December 18, 2014
Waste of time will not load

Sarah Bayles December 11, 2014
I found it very hard to do I could not even get past level 1

Cleona Whitehead December 14, 2014
It isreallyfun I think youshould get the the app because you might in joy it andyour find itfun.

Elli Brown December 11, 2014
Onlyjust got the game and it looks gerat

Zoë Beale December 10, 2014
Nice but hard. Some more level options would be good ?

Dean Brentnall October 29, 2014
Horrendous this is meant to be for kids its so difficult to get the launch right and if u got it wrong there is no way to control the character not worth the time nd effort

Chris Lovell October 27, 2014
Downloaded it and will startup and now when it goes to begin it crashes, everytime

SDAL Minsun December 21, 2014
Played this game. The graphics are bad.But still a cool game to play

Jess #FUN December 14, 2014
The only thing is it took about an hour and half to install. Whole family loves it!

Daisy Tewson December 19, 2014
Couldn’t get of level one / if u want more downloads make it more easier so younger and older people can enjoy the game

Rachel Milne December 7, 2014
Haven’t played it yet taking a long time to load

Caitlin Johnson November 2, 2014
Hate it soooooooo much my brother cried

Chris Lewis December 11, 2014
Almost impossible to control, Halloween one a bit easier than the Christmas one. Game got loads of room for improvement.

Hannah Malcolm December 8, 2014
Its alright it freezes it times but the rest is pritty good not the best app in the world

Game Tuts December 3, 2014
Its a good game if any one says its crap ur crap