Separate blue and red dots by moving separator door from side to side.

Very addictive It’s an awesome game and once you start you can’t stop. 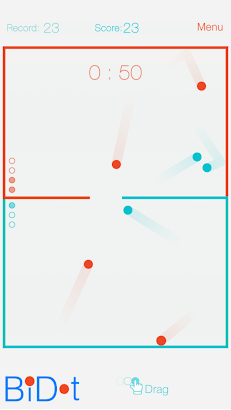 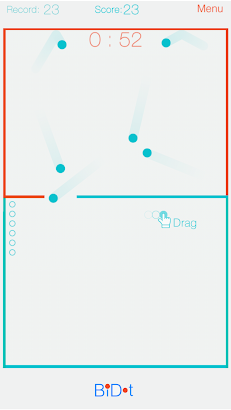 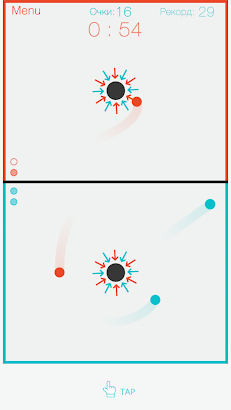 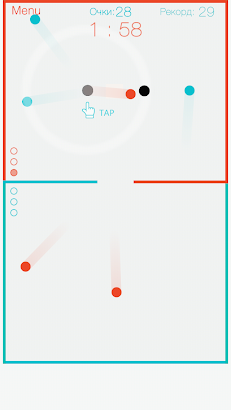 Separate blue and red dots by moving separator door from side to side. As dots randomly bounce around, your task is not to let them get to the area where they don’t belong.

BiDot is easy to learn, hard to master and always fun

– New levels!
– Fixed some fonts not being visible on LG G3 and other devices with big resolution screens;

Sudais Muhammad June 6, 2016
It’s an awesome game and once you start you can’t stop.

Jayce Rebar May 4, 2016
Fun little game with no faults

Sathwik K Subrahmanya November 30, 2016
Simple but totally worth playing it…

Kawhi Leonard July 3, 2017
Good game if your looking for a game this is it

Haris Khan October 23, 2016
This game is fun tell your friends and family

Christina Estell July 11, 2016
This game is addictive and a good game to pass time and just relax, unlike those hard games that make you rage. I like this game very much! Also, there are not many ads, so you can play longer without the interuptions. Very good brain builder with the challenges as well. Nicely done! Nicely done!

Justin Golden June 11, 2016
Parts of the interface that should be vector and pixelated. Also idk how to play Zen mode but it seems there is no way to lose. I just left it on and never lost, so I just quit. Please tell me how to lose this game mode

Joshua Biswas April 15, 2016
This game is very fun! Only problem is the levels are very repetitive. Almost every game, the level gets harder as the game progresses,but not this one. It stays at the same difficulty and sometimes gets easier because the time limit goes up. I do not like how levels are repeated however this game is a good idea.

Teagan Wolsey March 11, 2016
Gameplay is boring and repetitive. The opening is a lot smaller than they’re supposed to be and the pushing levels are flawed because it pushes it slower whenever you want it to go towards tge opening otherwise it goes fast in some weird direction.

ahsshole GAMEING November 27, 2016
I’ve been playing it for like 20 minutes and im hooked there no lag but thereis ads this game is totally worth it tho the onlyreallyThing i wish they would add is a pvp or onlinemode

Slavi Kolev March 28, 2016
Sliding door, portals and disappearing wall get a lot harder than the shockwave levels. But it’s a very fun challenge and in glad I found it

UnknownMarch 20, 2016
You play the same few levels over and over. Just turned on its side and/or with more balls to deal with. Upgrades last until you deactivate them and when you do that you get the money back. There are only 2 upgrades yet enough slots for 3. Money comes way to easy you get coins every time a ball goes to the right side, even if you put it into the wrong side and have it come back. The gui is terrible, level select brings you to the latest level no matter which level you select And there is no main menu button

Hunter Knox February 3, 2016
The game play seames really fun but it freezes after each level and crashes every time I play it.

Linora Garringer June 5, 2016
I would want to pick a level like redo it but it would not let me and would always pick my level……..also it would always try to get me to get something with coins BUT other than thst fun and it makes u figure it out

Conner Dalluhn September 5, 2016
Its fun and challenging so far. There r a tons of different ways u can get the ball on one side and i like that

Metal Drum Remakes & More July 1, 2016
This app… is amazing! Thank you for this, it’s a great time waster and primary game. This is one of my favorite games to play and the only game where I’m trying to be high on the online leader board! :3 ?????

Bryan and Caitlyn February 24, 2016
It freezes every time i complete a level. If it didnt freeze it would be 5 stars

catie preciado February 6, 2016
In the middle of playing it will kick me off and crash. Its really annoying cuz I like this game. ? piz fixxxx