Its good but when i join any server i check my name at the my minecraft account /gametag but i have no name and i tryed toimport skins by downloading it at mcpe master and then i don’t have the skin i want so next update pls fix that 1.2.3.0 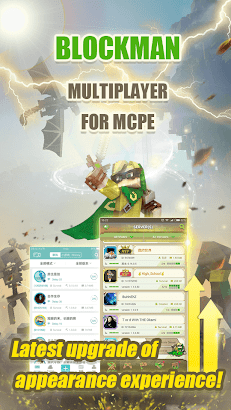 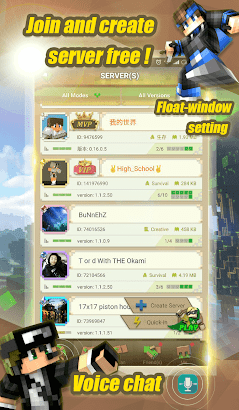 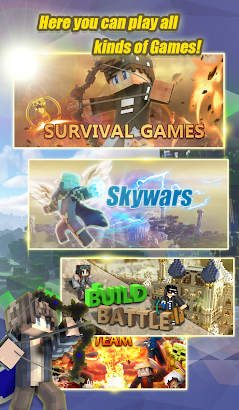 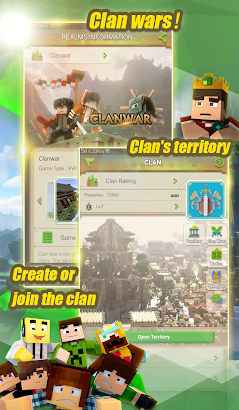 This is a mobile version for Android device. The iOS version currently is ready for download, please search “Blockman Multiplayer” in apple store.

★Minecraft Minigames
Blockman Multiplayer for MCPE offers the most popular minigames on a server including Survival Game, Sky War, and Build Battle. No more IP address and complicated settings, users can join the game by a simple tap.

◆Easy Use: Entering the minigames by a simple tap. No more downloading process and complicated settings in the app.
◆New Factors: Massive Resources, varying Roles, and extraordinary Talent enhance a creative way in the game.
◆Popular games: Full of famous Minecraft minigames including Skywar, Survival Games, Build Battle and so on.
◆Amazing Rewards: Full of exciting competitions and rewards for players. Double rewards for winner in server!

★Clan
The clan is created by Minecraft players themselves and can be joined 30 members maximum. There are many creative ways for players to enjoy the game with friends. Here, you can find your own team and build up a family with players all around the world.

◆Region of Clan: Set up your own Clan and achieve more rewards.
◆War of Clan: Battling is one of the most exciting way to develop your clan. Battling with other clans and achieve the glory with friend together!
◆Clan development: Developing the Clan and improving your roles’ level, which helps you achieve more values.
◆Clan Reward: The stronger, the more properties in the clan. It also bringing more rewards to members.

☆Free Server
Create and join the server anytime anywhere! People all around the world can play Minecraft together in Blockman Multiplayer for MCPE

☆Floating Window
After creating a server, users are able to edit the world through Floating Window. There are many different features including Modes Settings, Time Settings, Disable Items, Chatting, and Friend System, which offer more creative ways to players in server!

☆Group System
Players are able to create their own group! Easier to find your team member to join the server.

☆Gift System
There are many different gifts including Christmas Tree, Santa Claus and Crystal ball in Blockman. Pick one of it as a gift to your close friend!

☆Friend System
Following your friend in social system, and sharing funny moment with them. No more single player in game!

☆Voice Chat
Typing too slow in game? We offering voice chat feature to chat with friend any time any where.

☆Rewards System
Roles level up, Golden rewards, Game Experience and Daily Check-in, all of these relate with rewards in Blockman Multiplayer for MCPE! Joining our community to find out more excited thing in server.

☆Resources Management
Supporting all kinds of maps and skins. You are able to edit and add these things to create your own server.

DISCLAIMER-This is a third party App, it is not the game Minecraft or affiliated with the game and its makers (Mojang or Microsoft) in anyway.

jai DOBI October 24, 2017
Its good but when i join any server i check my name at the my minecraft account /gametag but i have no name and i tryed toimport skins by downloading it at mcpe master and then i don’t have the skin i want so next update pls fix that 1.2.3.0

legend 27 October 24, 2017
Can you find a way for me to sign in Xbox account in block man, so I could use my texture pack and skin packs.

mega minecraft October 24, 2017
let us use commands, more people would get the app if commands were allowed

killer gaming October 24, 2017
It’s a good app but there was a update to Minecraft and block man didn’t support it i can’t play minigame

Itz Jane October 24, 2017
I LOVE THIS APP BUT 1 THING CAN YOU REMOVE HACKS FROM THE MINIGAMES

MCprogamer 1165 October 24, 2017
Theres a big problem its that every time i want to join a server it keeps saying BLOCKMAN HAS STOPPED!!!!>:( but i love blockman!

A A October 24, 2017
Its good but you shouldnt be like always updating it to play

Keesha Belgica October 24, 2017
After i updated it, it says that there is no internet ane no one is playing, but i have internetPlease fix

Xoku nero October 24, 2017
Its better because Microsoft just forcing you to make a xbox account and it costs like 5$ or 10$ to get a new name at first you get only one change then you pay

ShotGunOPboy October 24, 2017
This thing is the best Make a updates

UnknownOctober 24, 2017
This is like the best multiplayer app created

UnknownOctober 24, 2017
Good to play with your friends and family

Puffle 13 October 23, 2017
I really like this app… and I’m glad it supports my minecraft version now.. but whenever I try to join a server it says “Disconnect from the server please join again” and I try to join again but it says the same thing.. But really other than that, this is a great app! ?

Developer Blockman Multiplayer September 13, 2016 Sorry for inconvenience. We have solved the bug. As our ongoing commitment to stability and security, we will keep improving our functions and servers, Thanks for your support

MCorRB Gamer October 22, 2017
Its very cool I have friends and other peoplefrom other country well its fun app ? but it still won’t let me join to the mini games I wonder why pls fix that its said it only support other versions ?

[DGW] Dream Gamer Wolf October 22, 2017
Its ok but when i update blockman it said i dont have friends even though i have 300+ wat happened to blockman it start to stink plz fix it i miss da 1 dat never has bugs on it >~<

LazyLife 360 October 22, 2017
When I First Started Playing This I Was Like “This Is Not Going To Be Bad” But Turns Out…IT WAS EPIC!! I Rarely Experienced Any Lag..You Have To Download This App Peeps!

Noobtastic Gaming October 23, 2017
You guys are awesome but I have a list of bugs like one is every time I do a command itglitches out my hud or sometimes it crashes but if you fix these bugs your app will be golden

BananaRises101 Pixel Gun October 23, 2017
This blows i cannot even join any server… My version is 1.2.0.2 i can’t when it was loading i saw 3 servers Gatucraft ,Messacraft and The server i like to join there is also something above it said Global Resource Crash Like i have no addons this had made me angry Please oh please fix this bug or something Wrote by me

UnknownOctober 22, 2017
U DELETED MY GIRKFREND I TEXT ON THIS APP WHAT THE DUCK DUDE I’M GONN A USE MULTUPLAYER MASTER >:[

Anthony Williams October 22, 2017
It says I dont have any friends plz fixed this bug its so annoying.

Michelle Sweeting October 23, 2017
Plz make a update where the new version of mcpe can play mini games, if not imma delete the game and give u 0 stars and so will many of others…So plz fix ur damn game!

GalaxyBlaz YT October 23, 2017
OMG OMG THERE’S A NEW UPDATE I wish you guys can add to build battle a holloween update and pls fix the glitch/lag

IMRAN THE GAMER October 23, 2017
What is this… please fix this problem on new update….when I update the game I have no friends it’s says me I haven’t any friends..I maked so many friends but I haven’t no one after 5.3.2 update of blockman please fix this.

キティ移動 October 23, 2017
Can you plz fix this again I can’t barely change my skin and my user name won’t show up

Developer Blockman Multiplayer December 20, 2016 Thanks for your support) This is our new social group: Blockman for Multiplayer, https://www.facebook.com/mcpeonline/. There are many users speak in English, let’s chat together:) Welcome!

Tryvon Jones October 23, 2017
It was fair, doesn’t ever really update accordingly to the actual mc game app, it now supports the recent update to create servers but they’re still lacking we can’t use block man to its full extent if we have the update we have to downgrade just to play the mini games fix this and ill give 5 starts hands down no complaints