The Best Bubble Shooter Game with a Twist – 1000 Fun levels!

It would be awesome if it didn’t have those video pop-up advertisements every minute. Other than that, it’s a good game. But because of the ads, I’m uninstalling. I understand you need sponsors to keep the game free or whatever, but find another way to have the ads displayed. The loud pop ups suck! 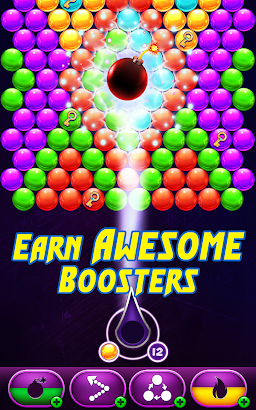 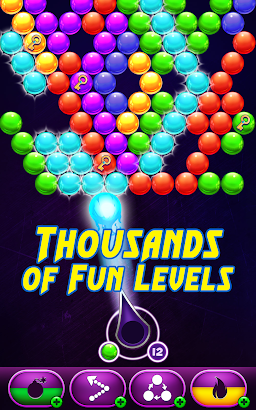 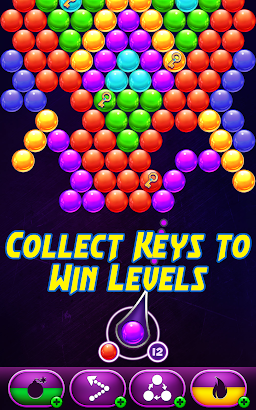 Are you the next bubble shooting master? Play now and find out. We have developed an awesome game perfect for your Android phone or Tablet.
Begin the crazy adventure today and enjoy thousands of amazing levels and powerful boosters that will help you pop your way to victory. Solve the bubbly puzzles and collect keys to win levels.

* Clear the board by matching at least 3 colors
* Earn awesome power-ups by making 7 shots in a row or popping more than 10 bubbles in a single shot.
* Earn stars for using fewer shots to clear all the bubbles
* Pop all bubbles to win, more score -> more stars

Michelle Albarran June 26, 2017
It would be awesome if it didn’t have those video pop-up advertisements every minute. Other than that, it’s a good game. But because of the ads, I’m uninstalling. I understand you need sponsors to keep the game free or whatever, but find another way to have the ads displayed. The loud pop ups suck!

Lori Anne May 9, 2017
I am enjoying so much. May be mentally challenged but this makes me feel so great. My friends get lost on how to balance out balls but I even look ahead. My doctor like how it makes me think ahead before do each shot. Thanks for great game!!!/when do we get more stages.

Patricia Foote April 28, 2017
Too many commercials. Just started playing and I am sure as I go on the computer I am playing againts will make it impossible to win…and you quit in frustration.

Jeremy Mclaughlin August 11, 2017
Great game. Still stuck at level 700 though for a month.

Jason Showell April 28, 2017
Too many ads, let me pay a couple of quid to not see the ads. I will not click the ads and they just ruin game flow.

UnknownMarch 3, 2017
Great game ,,,relaxing but enough of challenge to keep u interested.And I dont have,,,,to spend money to go to next level

Lucretia Marie D August 13, 2017
I’m at level 694 and the game keeps shutting down on me.Btw, new level need to be added

Helen Heinz September 25, 2017
This game is fun ..BUT..some games are impossible because of the programming particularly in the 500’s and 109 only gives 20 shots … with 12 shots left only 2 stars are given ..time to do some upgrades..

amanda williams June 12, 2017
Great game but I finished all the levels and they still haven’t added more levels!!!!!! Add some!!!!

dijonay bennett August 10, 2017
Too much advertisement and level stopped at 700.

Esthet Salinas July 31, 2017
It takes you FOREVER to get some points,,,CHEESY

arvin evans May 5, 2017
Thanks for a very addictive game

rach Corkey11 May 22, 2017
It can b addictive but frustrating as well but all in all its good

Edward Alley May 7, 2017
Relaxing and enjoying and entertaining and fun