Save the presidential candidates from getting crushed… Or not. Its up to you!

The Whack-a-President one was rigged i dropa rock on a candidate and they get pointsEdit: I was dropping them on my rival 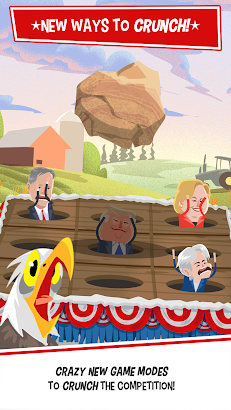 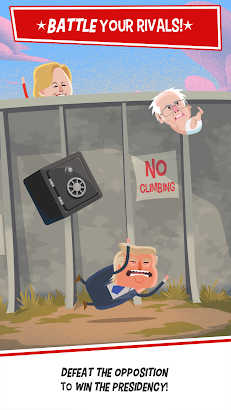 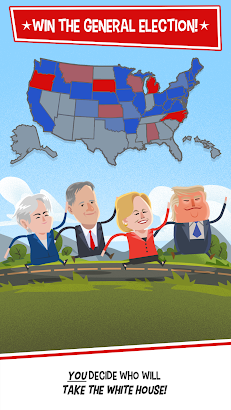 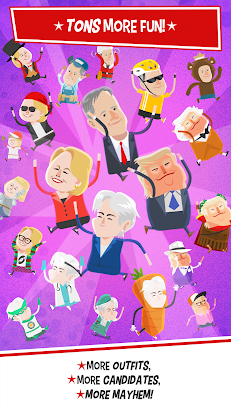 It’s crunch time… The general election is on!

Crush the competition and guide your candidate to victory in an all-new head-to-head battle. Win 270 electoral votes and you’ll be the next president of the United States!

Candidate Crunch is a hilarious and addictive game and a one-stop shop for everything you need for the election.
Stop by Election Central (powered by Rock the Vote) and access these easy-to-use tools:
• Online Registration
• Deadline Notifier
• Polling Place Locator
• And more!!!

10% of Urthworx revenue will be donated to DoSomething.org, one of the largest organizations in the world for young people and social change.

ThatKidPlaysGames January 5, 2017
The Whack-a-President one was rigged i dropa rock on a candidate and they get pointsEdit: I was dropping them on my rival

UnknownNovember 1, 2016
I love the graphics and sounds! And watching Hillary and Trump get smashed . A+ game makers!

UnknownOctober 3, 2016
The app does not tell you who to vote for and let’s you pick who YOU want.10/10 democracy again

Adam Williamson August 25, 2016
This is hilarious! Good way to get people involved in the election!!

Kawthar Aouda November 24, 2016
When I open it it shuts down the app

fernando Arenas September 3, 2016
Because I get to crush Donald trump

UnknownNovember 9, 2016
Could you make it easier to play that wackamole game please? Other than that it is great! ?

Brian DotGame November 26, 2016
It reminds me of save the president

Jolene Mullins September 27, 2016
What do u do for the whack a pole

Developer Urthworx Inc. July 19, 2016 Hi Jolene – You want to catch the baby – do that by NOT tapping as it falls.

Gerhome De Ceatue December 2, 2016
All i see is black everything black

ThatOneGuy 2 November 18, 2016
Even thouh some of the levels are reprtitive, the game is pretty cool as it adds politics and a cartoonish vibe into one

Us Perrines October 19, 2016
Hillary deserve every boulder she got (:<

Meg Grace October 18, 2016
I love crushing Trump and Hillary, too bad I can’t do both at the same time!

LegendaryRubyGamer FUHRELZ January 3, 2017
This is presidential debates on steroids. Just not coming back to it much other than to stop Hilary

Momma Cabral October 13, 2016
I think it’s funny and addicting but it’s too hard

Leonardo Garcia October 30, 2016
When I started playing it I was in love and it’s kinda easy acept the poll thing

melanie webb December 10, 2016
This game is awesome I’ve had this like 10 minutes and it’s ultimate 10/10 would recommend

ya boi Mario W December 4, 2016
People need too lovethis game because trump is in in this and the people that love trump I’m sorry.

Mijailo Alonso November 19, 2016
I love the bugie dance that Trump made in the white house. It was halarious! !!

butterfly Beauty November 17, 2016
I loved this game the first time I started playing game it is the best game that I have ever played
Tags
Game Alliance