Our experiments did upset the creatures, making them uncontrollable.

I like this game! it’s really fun and all but what keeps messing with me is the 2nd level. that spitter keeps screwing me up, I know it’s pretty easy to shoot and block ALMOST at the same time but… yeah, and then you have to kill a hive, then some monsters, then another spitter… So in my opinion, i think it would just be a little bit better if it was toggle for shield you know? BUT, if you do change shield to toggle in the future, you should also make it to where you can toggle the shield and sit there shooting, it would be soo much more easier; Thanks for hearing me out and i’m happy to play a good arcade game like this it’s really fun 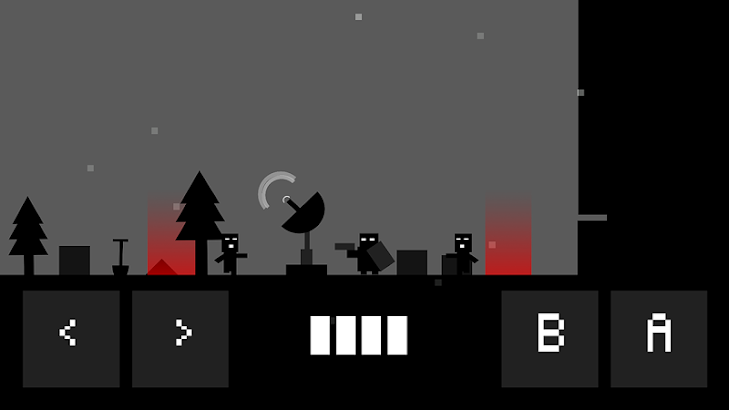 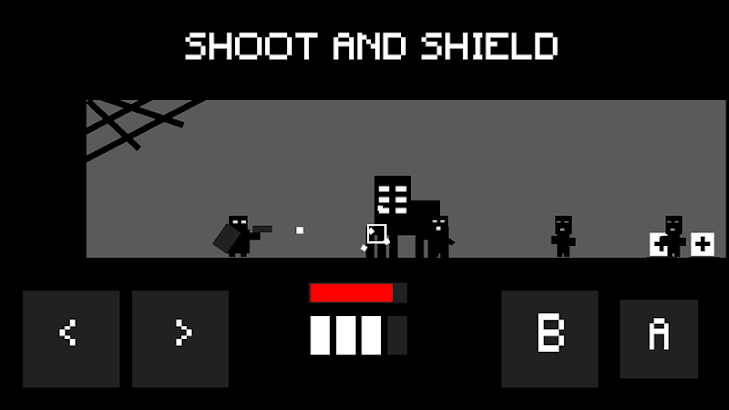 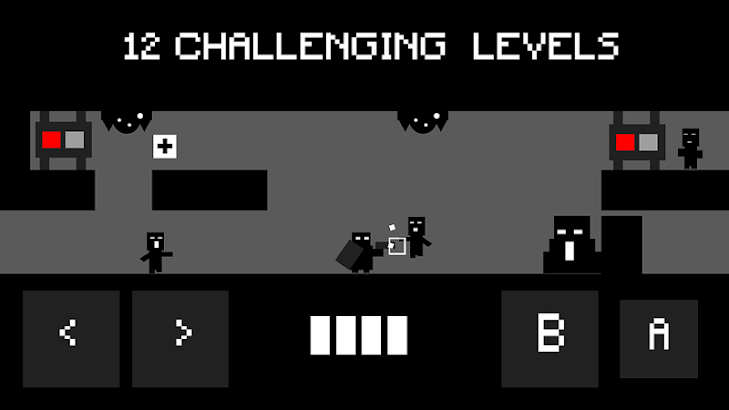 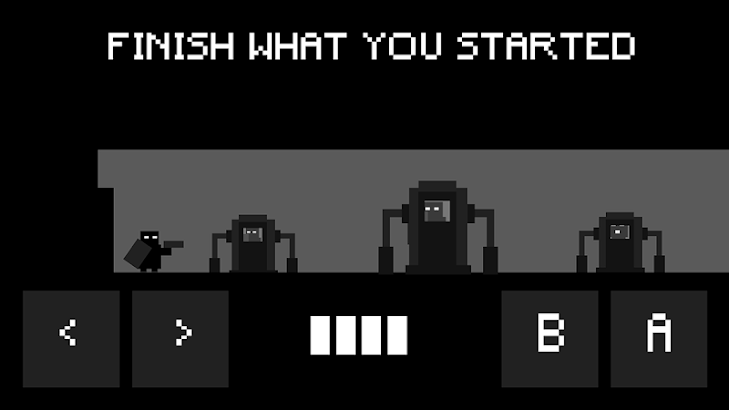 Our scientists found a race of strange, undead life forms. Little did we know that our experiments would upset the creatures, making them nigh uncontrollable. Desperate circumstances forced our hand to modify one of them to fight his brethren, we called it “Creepy”.

Can you finish the game?

+NEW BONUS MISSIONS
“We didn’t need the creepy Units any longer, they did what we programmed them to do, so we decided to eliminate the last contaminated specimens, the creepy’s.
But one escaped us, he must have had help..”
Gamepad support added:
Fire TV Remote,
Fire TV Gamepad,
XBOX 360 Wireless and Wired gamepads
PS4 Dualshock 4
Steelseries Free
OUYA Gamepad
Logitech F310 (X Mode)
Game Elements Recoil
NYKO Playpad Pro
Any gamepad made for Android (Android version 4.1 or higher!)

BlackMatter 79 January 9, 2017
it’s really fun and all but what keeps messing with me is the 2nd level. that spitter keeps screwing me up, I know it’s pretty easy to shoot and block ALMOST at the same time but… yeah, and then you have to kill a hive, then some monsters, then another spitter… So in my opinion, i think it would just be a little bit better if it was toggle for shield you know? BUT, if you do change shield to toggle in the future, you should also make it to where you can toggle the shield and sit there shooting, it would be soo much more easier; Thanks for hearing me out and i’m happy to play a good arcade game like this it’s really fun

Dr goopy xd October 1, 2016
*Groans* Add check points! I keep dying on level 11 and it makes me start all over again! It just makes me so mad! Plus, its one of the longest levels, which means, if you die, you have to restart! I know its supposed to be hard but some people like me rage and destroy stuff/break stuff!

Developer David Zobrist October 3, 2016 DONT BREAK ANYTHING. But yes its supposed to be hard. There is a youtube video from a player of how to beat it.

Miguel Ar June 8, 2017
ITSAMAZING.THE BEST 2D GAME EVER BUT YOU CAN MAKE IT MORREEE AMAZING LIKE. THESE THINGS. HAD UPGRADES BUT NOT TO OVER POWERED . 2ND MORE ENEIMES. 3RD MORE LEVS. 4TH A PET LIKE A BABY SLIME OR BABY BIRD OR LIKE A DOG. 5TH SOMETHING AWSOME ???. HOPE YOU LIKE MY IDEAS AND PLEASE RESPOND

Developer David Zobrist June 11, 2017 hehe thanks for the input. if I add more stuff in future it would be after the first levels. so creepy becomes something more in the late game.

Filipe Tedim September 9, 2017
Too many invasive ads. Every level finished there’s an ad going for 30s, completely breaks immersion and made me feel like not wanting to play anymore. Ads are perfectly fine, but too many break a game, leads to bad reviews, and leads to less people then playing the game, which leads to less money through ads.Controls felt a bit clunky on movement, other than that it was good. The game itself was easy as well, bit more challenge would be cool. I literally did not die throughout the whole game play.

Tang Jun Cheng Jun Cheng June 11, 2017
This’ creepy’ game is awsome! I haven’t played the hole game yet but its great . I wish there was one more button that is a sword, it does twice as much damage as one shot from the gun, the sword should be like a grayish colour like the shield and the gun, the sword should be one creepy’s back but you can still see it. When creepy attacks with the sword, he just swipe once , so like the gun he has to keep clicling it to use it. Let’s say the sword button is a ‘X’ button . I hope to see this feature added in the game.And also if you like you guys can add a ‘Y’ button for jump like a ps3 stlye iF it doesn’t ruin the gameplay if the jump feture ruins the game play Then just add the sword feture.

Coop Gipp May 12, 2017
This game is awesome, it’s fun, addictive and intriguing. I only have one problem with it, the adds, there are too many of them, there’s one after every single level and it’s so annoying, you get the same add about 5 times in a row every time as well. Other than that it’s enjoyable

Kevin August 30, 2016
Love it,it’s fun to kill time.And I have no issues donating.But not for 6 bonus levels.I’d pay to remove ads,and ask that you constantly add new levels.I got through the 12 in 10 minutes.

Tyler Blaze September 24, 2016
It has a simple concept and very smooth controls, however can be improved by adding more enemies and level. A good 2D platform game, you may want to add in power ups, upgrades etc. But not too overpowered that is.

dsharkyo July 15, 2017
Loved the music, kept me on edge the whole time. Haven’t finished it quite yet, excited for the rest of the game. Kinda unsure about the story, but that’s probably since I haven’t finished it yet (a-doy).

K9521 Creates July 7, 2017
The game is fun but very short and easy. The ads are quite annoying seeing as they are right after every level and the ads lasted longer than each level did. Besides the ads it was a fun game. 4 stars because of the ads

Korra 228 September 9, 2016
Ads are super irritating. Plus, they even make me lose or brake the game. And it’s hard. Everything else, great job. Also, what is that suspicious voice that sais random stuff?

Vohc November 10, 2016
Just loved the simplicity and the overall coolness of it all. The voice acting is great, and the contrast that it makes with the minimaistic aesthetic is sublime. It’s that kind of game you can enjoy both sober or high A.F… Get it!

Developer David Zobrist November 12, 2016 lolz. yeah I smoked at a lot while working on orcs and creepy

Ethan Madden September 18, 2016
A very fun game I love the stile but for some reason he doesn’t react when I give an instruction like move left/right other than that I like it

Aditya Pathak January 27, 2017
Pretty much straightforward. Average difficulty, have played much more difficult platformers even on Android. Basic story, no cliffhanger at the end, not counting bonus levels of course. Nothing extraordinary.

Jon Alder December 16, 2016
But the constant yelling and stale memes are slightly too annoying.

Rogert Just October 11, 2016
STOP CRASHING EVERY 5 SECONDS LIKE AS SOON AS I MAKE SOME PROGRESS, ITS BACK TO THE HOMESCREEN!!!!!

MinecraftClasher 2.0 November 23, 2016
If the financials I’m going to the next week and will not work for the useor and the I in the next week to see if it of the individual

Recardo Dalisay March 5, 2017
Its the best retro game ive seen.. The graphics,sound,easy touches fine view was outstanding you did an awesome job david but I hope you can make it up to level 100

Brandon Arreseigor November 20, 2016
Bought it in just a few minutes cause I saw the potential, beat in 3 days taking my time, add more lvls in the future and keep making games dude ?

IceShadow November 20, 2016
It’s great but there’s always an add after every level I finish and I never died on any of them yet

Jordan Adams June 11, 2017
Super surprise of a game!!! It’s a side scrolling super with simple yet endearingly dark visuals, sharp control, great audio, and tons of effortless style. I say surprise because I expected nothing going into it;it then proceeded to blow me away. I can’t get enough of this game.

Sebastian Barr October 30, 2016
Cool fun gameplay and is very simple in the controls but I hate that you have four health

UnknownJuly 7, 2017
I usually would not type this but I hated it so much I wanted to slam someone through a table, hope the makers are happy with themselves, it would barely let me shoot or block on level three, it wouldn’t let me turn the phone, and it would go home automatically. Try a different game to make.

Aradea Amodya May 14, 2017
If i open this game, this game say unexpected error : no config chosen. Because of that i uninstal it. Please help me. My phone is HTC Desire HD.

Kiel25 pro February 24, 2017
Its a sick game pls add more levels also add some new things like weapons and gears i hope you will add this.

Isaac Hernandez November 22, 2016
The game is good,but please add a pause button because it’ll be really really useful,if u do i’ll rate 5 stars

Developer David Zobrist October 1, 2016 thanks for your rating! The ads make me able to keep on going
?

īnfamous wïll wg014 November 24, 2016
Game is great don’t mind the adds and concept is wonderful but one small flaw, a jump button.

Melvin glooplin February 19, 2017
The games challenging and certain parts you’ll have to do over an over but you just have to get used to it.

alex Aktushev March 11, 2017
It doesnt work on my phone . The loading image is stuck midgame and the buttons dont respond .

UnknownNovember 5, 2016
I just downloaded it yesterday but ibwould love if you put checkmarks please

Jessica Perez August 17, 2017
This game is great I LOVE IT it’s sooooo cool just y 4 her y not WEN you don’t get hit and you get helf it add helf STILL LIKE IT

Jacob Wheelock September 9, 2017
It’s hard but that makes it fun if you make one wrong move it’s almost impossible to fix it if the fat guy who shoot fire from his mouth it is weird but it because of the fat dude I guess

Kadri Alo April 29, 2017
The graphics are bad but that doesn’t matter over all it’s really but the narrator’s annoying

UnknownJune 30, 2017
I hated the game the big ones what barf out fire is really hard