Loading I used to play this game on an old device that failed because it wasn’t a very good device. I put a lot of time into my game. I still remember my information and was hoping to be able to continue on my New device. Every time I try to get on it gets to The background of the login in page and loads for about 26 and then it says “failed to retrieve server list please tap to exit.” I love this game but its hard to continue to love it if I can’t get on. 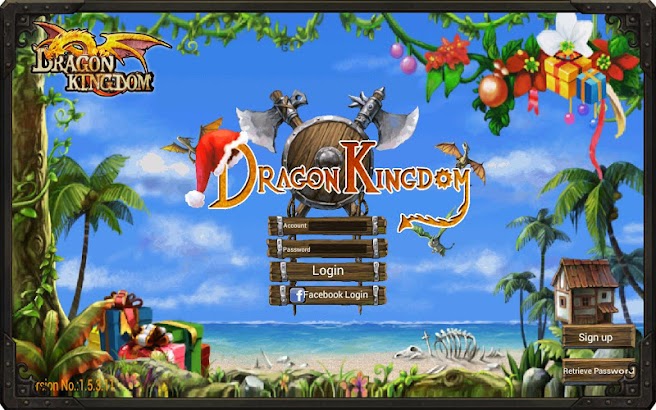 In a world where dragons crave flesh, rebel pirates seek to take your freedom, and a ghost ship travels the seas in search of treasures, you must build your kingdom to glory while defending your lands against enemies, kings and queens in this real time strategy game.
Features:collection plundering;daily war declaration, stealing resources;legion system;chat system.

Brenna Simpson December 3, 2014
I used to play this game on an old device that failed because it wasn’t a very good device. I put a lot of time into my game. I still remember my information and was hoping to be able to continue on my New device. Every time I try to get on it gets to The background of the login in page and loads for about 26 and then it says “failed to retrieve server list please tap to exit.” I love this game but its hard to continue to love it if I can’t get on.

Rickey Duncan February 22, 2014
Been playing for over a year but for last cpl of months it doesn’t matter what device I log into I get 5 min of play then get booted for no reason Plz fix this

Andy Hansen April 1, 2014
This game is dead. No gm who attend to errors or bugs. No events and no chance toPromote yourself in the game without spending tons of rl money. To bad u cant rate less than one star

Will Parson March 30, 2014
I use a Samsung Galaxy S4… The game opens and plays just fine. The only problem I really have is that everything is so small. There’s no way to adjust the screen, no way to make the icons bigger. It’s hard to see/read/play. If I could actually play it, it would be worth more stars.

Linda McCallister August 25, 2013
WARNING! don’t spend any money on this game it can be hacked and all your playing work gone. Top player ranking of number one had it happen

Michael Davenport July 15, 2013
Game is geared to force you to buy ingame currency. This is primarily done by creating one off events that can only be achieved by spending real cash. Generally its required that you spend more cash than a brand new xbox game too!

Matt Schueller February 7, 2014
Game play is ok. Their customer service ia horrible. I asked them to close my account down. It took them 5 days to get back with me. Their idea of closing down an account is deleting their program off your phone. That still leaves my info sitting around out there. Thats not cool. They should consider account closing for their furture impovements. I would give them 0 stars if i could. I also can’t believe you have nothing to reply to me in return. Also I have flagged you guys to Google Play Store.

Toni Torres July 20, 2013
dont even get the game. lvl 70+ hunts lvl1+s since theres no level cap protection. harrasment is daily. hackers who gain 40+ lvls to lvl 70+ in 1 days time have a power over 1.5 million. your reports to the gm fall on deaf forign ears. they dont care as long as the hacker pays for things. events are all the same. absolutely nothing great about dragon kingdom. dont waste a dime here.

Kohryu StormWing April 12, 2014
After what the dev team was calling a maintenance, the game has basically become unplayable. Fix the issues or let the players know what’s going on X6 and I’ll be happy to give 5 stars, until then nobody download this game.

Adam Entenman April 8, 2014
After countless hours spent on this game, they did an update to fix ONE PERSONS TOON. Now everyone in the game has issues logging on. Game died as a result. Don’t even bother trying to contact support. They used to at least respond eventually, usually after about 2 weeks. Now they won’t do anything at all. I want my money back. Don’t trust this greedy chinese company.

A Google User January 9, 2013
Username: Sh2d6w Server: throne of power Me and quite a few other players haven’t been able to login to our accounts even though other players can. It comes up with a message saying “wrong password or network instability” i personally have played on this game for well over a year and id like to be able to get into my account i worked long and hard on. I don’t wanna lose all my hard work just cause of some server merge that really wasnt needed. So can you tell me why i can’t get in at te very least?

Robert Corneliusen August 18, 2013
I don’t spend money and can still keep up wit others. I have had no probs wit dis game and I’m lvl 73. Name is MWCLUV alt is WHOOP2 hit me up to add friend.

Joe Tackett January 9, 2013
Username: Cujjo i want to play now let me in i have spent to much time and money to just let u have it its no different then coming in and stealing my ps games fix this problem please. And its not just one i cant enter either account

Nathan Simpson July 24, 2013
AVOID THIS GAME THE DEVELOPERS ARE GREEDY. They dont listen or care about the players all new content is done as cheap as possible any viable complaints the dev team wilp mail back and tell you to spend more money to get better. Game is bs dev team too greedy google remove it from store teach these A holes a lesson

Peter Olsen August 11, 2013
Its true you can not compete with out spending a minimum of 25 usd a week. The game is buggy and you will not be compensated for lost items you’ve paid for.I’m in the top 10 on undead Knight server .Ingame mail kajun before you waste money on this. You will be dissatisfied.

Drew Miller January 20, 2015
Or, remove it from Google play. I played this game since it came out. I stopped playing for a while now it won’t load servers. FFS! I spent a lot of time and money only for it to be all stolen by X6. Greedy s.o.b.’s. At least sell the rights to someone else so this game can continue, although changes need to be made. NOT HAPPY! These developers need a kick in the ” You know what”…

A Google User March 4, 2014
Its an excellent game-totaly beyond my fantasy! The problem, you’re asking? Well, its simple-the game wont futon my phone!v(The screen). Anyone,help??

Ron B February 26, 2015
Im dropping my rating to 1 stars. Im a long time player.now Its not loading server list. FIX LOGIN PROBLEMS and ill increase my rating back to 5 stars. Its a great game. Awesome time killer.

A Google User May 22, 2013
This game has become a complete waste of time unless you are willing to spend large amounts of money. The events they run only ever help those that pay. Basicly You cant be competitive without spending money.. DO NOT GET THIS GAME SAM

Keith Osborne January 12, 2013
People send you a message and the game crashes, have a problem and support takes 3 weeks to reply and now an unneeded server merge to cap it all off and they won’t allow you to delete your empire.Uninstalling.

chris vernon April 10, 2015
Used to play it on my old Tablet just fine,but when I got an upgraded Tablet suddenly it says ‘failed to find servers’. What I’m basically saying to the makers is FIX THE STUPID PROBLEM,OR EVERYONE GOING TO QUIT.

A Google User March 21, 2014
Over two month can log in……no respond.nothing….game after 85% just crashing…sad…finally I log in but no joy at all,game crashing all the time,very slow and annoying,I have nice speedy android phone and only this game so bad….sad face…and guys you don’t deserve event 1 star,sorry :'(

Kim Griffin March 17, 2013
Its a good game butthe only thing is there r bullies on the game that will not let u move up on the game and I told the gm bout it and they dont want to respond back till yall fix the bullying I rating this game as one when yall fix it I will change it back as five

Armando Benabides April 11, 2013
None stop issues they won’t fix,they over charge for coins and items its ridiculous. Constantly getting stuck in battle so you can’t defend, plus its a drama fest from hell….

Charlotte Tyler February 26, 2013
The merge was meant to be completed by now….it was meant to be from 0900 til 2100 server time!Its gone way past that they shouldnt say they can do it in a time frame when they clearly cant. STOP ALL YOUR STUPID MERGES. WE WERE FINE WITH HOW IT WAS! Also gm you might wanna answer people…and decrease your dragon coin prices….can you say extorshion….

David Williams December 12, 2013
Its getting better, ignore hacking reviews, players shouldn’t give out passwords!100% safe and still being developed.

A Google User January 9, 2013
This is the only game ever spent money on. Now that they have merged servers can’t log on. What a rip off!!! Don’t buy anything from these guys.

Marielle Paras May 31, 2013
This one is my favorite ‘clicking’ game. Lol. But it doesnt fit on my LG phone so I can only play it on my tablet. Please fix the resolution for my LG Pecan.

A Google User March 16, 2014
Developers have given up. Can’t even log in any more

Tina N Jason Cass April 15, 2013
This is a rip off they make you spend money then update game and you loose everything you just bought then they ignore you and never replace what you lost! Dont bother downloading I am currently working on having it removed from the google play system all together!

Josh Rhudy September 8, 2013
Game constantly freezes and force closes. When tech support was told of the issue, they said “our game isnt compatible with all phones.“ So fix it u lazy fuxx!

Sheppard Simms January 9, 2013
Username ion server name throne of power it wont let me log in it keep saying wrong password or network instabiliy .could you fix the problem please

Ahmed Jarwan November 19, 2014
the game without support, i advise every one not to play this game or any game from x6 company because they dont care about players. and you will lose your money for sure. and if they fix the game i will change my commite.

z Arcana x October 11, 2015
Isn’t it about time this was removed from the play store? Seeing as none of your servers are available.. Just rubbing it into the faces of people like me that put hours and hours (aswell as ££££) into this just to sod off with our money.

Puck Nichols January 9, 2013
The server I use is on maintain now and I can’t log into another server should I just uninstall the game or am I gonna be able to continue with the countless hours I have played

A Google User February 25, 2013
The last patch has totally ruined the game taken king lvls back at least 5 gear is gone and so r some of the enhancement stones please fix

A Google User July 31, 2013
No new development. The cost of new gear is ridiculous.Changes in game that make it more difficult for newer players. They are running this game into the ground.

Sean Pruden February 28, 2013
The game is starting to get boring no new contentcoming out at all and there’s never any information on the forms from these guys