A sequel to Dustoff – Heli Rescue

Amazing game, love the sounds and dynamics, gameplay is awesome. Heavy on graphics though ? i have rooted Z5 (e6653) with snapdragon 810, with edited thermal protection. Phone reaches scorched heat of70+ degresCelsius on CPU and 80+on GPU ? i get minimum lags from time to time,but can play levels smoothly through on high details settings. 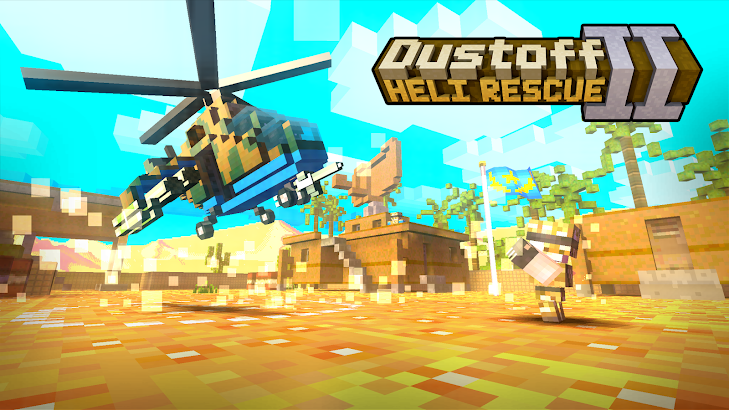 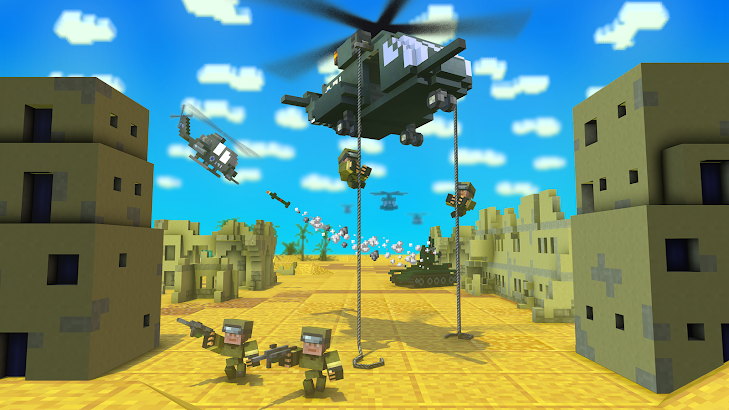 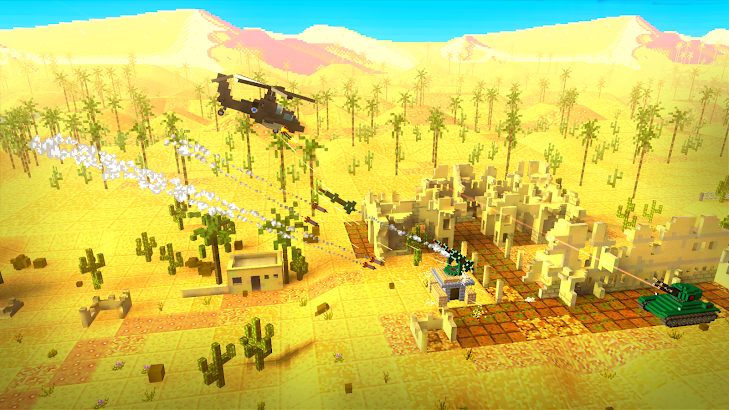 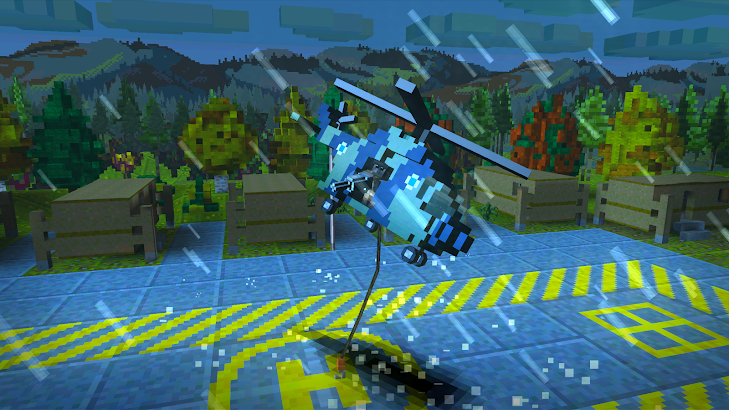 Take off with your rescue helicopter, be the hero chopper pilot, and save the life of the wounded soldiers in the battlefield. Fight against tanks and trucks firing their weapons at you and transport the friendly army back to their base.

In Dustoff Heli Rescue 2 you can:

Save hostages being held in Prisoner of War camps.
Combat in military attacks in the desert, forests, mines, swamps and fjords.
Build radio towers and bridges.
Protect the friendly truck and VIP convoy before the enemies can reach and demolish them!
Find and transport the stolen trucks and cargo and take them back to the HQ!
Fight against the extreme weather conditions and fly in dust storm, heavy rain and snow blizzard.
Upgrade your weaponry, install various gun, missile and rocket weapons to protect the friendly soldiers.

All in a well known blocky style in a family friendly mode, where humans never die, enemies always run away.

Added two new aircraft, the Ufocar and the Helocycle. They can be unlocked by collecting dogtags.
Minor bugfixes
Removed permission.

stipi69 Terrarian March 24, 2017
Amazing game, love the sounds and dynamics, gameplay is awesome. Heavy on graphics though ? i have rooted Z5 (e6653) with snapdragon 810, with edited thermal protection. Phone reaches scorched heat of70+ degresCelsius on CPU and 80+on GPU ? i get minimum lags from time to time,but can play levels smoothly through on high details settings.

Jeff Boman March 8, 2017
Love the game! Too many adds and when i paid the $2 to not have to watch adds to resuply, it didnt work. Worst part is that i now cant pay again vecause it says i already purchased that. Would love to rate 5 stars, please help!

Vortex Spinner March 12, 2017
So far so good. Lovely little Choplifter game. Hope its not ruined with advert mania. That’s the trouble these days. Nobody creates Homebrew or freeware much, anymore. Its a dead concept. Still worth 5 stars. Good work devs.

UnknownJune 28, 2017
I am really enjoying the game, and wad a huge fan of the first. But i absoutly hate the “fuel” syestem that’s like energy to play levels. Would give 5 if it was trashed.

Wouter Van Der Merwe July 30, 2017
Awesome game. There are so many games out there in the marked. Finding the real thing is as rare as finding a tooth in a hen. As far as I can see it has game play, sound and graphics like none other.

Commander Huygens April 17, 2017
Sound effects? Very cinematic. Graphics? Amazing. Characters? ADORABLE. Music? Catchy and upbeat.The soldiers at the base can do anything. Patrol, cook meat, play golf, talk, do drills, walk and run, enter and exit buildings, limp, carry canes. So sad, though, at the near end of the game, I noticed that the POWs (Prisoners Of War) started coming back with bloody bandages on their faces. Two more things; one, that last mission…WOW! What a rush. And two, I finished the entire game but i have only seen two white people on the Redfor. Every other character appears to be black.

Jason Richard September 25, 2017
Seems like it could be a good game.. however, after completing the tutorial and the first level you are greeted with an impossible 3rd level. After nearly instantly dying my phone also crashed hard. Galaxy S7 STOCK. I couldn’t even bring up recently used apps, had a blacked out screen for a while and really was scary. Moot.

Richard Walker May 29, 2017
Level 25 keeps glitching while trying to fly through caves and crashes before i can do anything. S7 active

Mike Schultz May 19, 2017
Skip this and get the first one. This one looks worse, the controls are worse and for some reason the trucks on the ground have a longer range tha your chopper. Crappy follow up. Just get Dust off 1

Spear Lord Burghardt May 16, 2017
I loved DHR1,today as a surprise when I saw that Dustoff Heli Rescue 2 came out I was so excited; it’s such a cool game.I have a few games that I can’t wait until the next version is released, and DHR2 is among the top of the list.Awesome job on development guys, you have something really cool here, keep up the good work and I hope to see DHR3!Thank you for hours of entertainment.

Johnnie T September 26, 2017
It suppose to be a very fun game,dunno why it keep sudden shut off during in the middle of the game play at LVL 25,it had occurred a few times already… admin pls chk it out b4 I pissed off n delete this game away

Jack Gardner April 5, 2017
Great game, when it is not constantly shutting down or the heli doesnt respond to controls so you run into a mountain at full speed when returning to base.5/5 other than thaf but with the constant agrivation that part gives me 2/5

Curtis Hamlett March 2, 2017
Wicked fun. Fast loads. Tricky controls to start, but easy to learn. Beat all 35 levels, but have not collected all stars & dogtags. But I will!

UnknownSeptember 17, 2017
The controls were so difficult to use and when I tried to turn I’d crash. I do not recommend this game.

Emerald Builder April 13, 2017
Fuel I wish there weren’t any fuel expect from that it is a amazing game but i wish you could tap what you wanted to shoot and i wish you could shoot the enemy soilders when tjey try and run away and you get ten coins every soilder you kill

coach mcgillis March 25, 2017
The wind in the later stages are supposed to be a challenge but all they do greatly decrease ingame experience. The helicopters will flip out and crash if they lightly brush against something

vinny sanchez April 1, 2017
Dust off 1 was great game. This is better. Way to go INVICTUS.Just 1 problemget rid of the space ships etc.. that gas nothing to do w this type of game. Keep it real.

Esteban Alvarado April 8, 2017
Everything​ is amazing! Physicsare good! Could y’all add more volume for the dispatch and more lines like: thanks for the support, take us back to base, and all like that. Can you add a feature that you can upgrade your base

Jilly Feianita March 30, 2017
I have !ore issue for this game,on my Samsung tab s this game randomly force close during play,its so bad because I’ll lose some live

ROKA611 July 21, 2017
Game crashes in midgame due to high cpu usage… it happens everytime and i am stuck on single level due to that.

Lee Boston August 5, 2017
Great game. It crashes too often though

Christian Swanson June 1, 2017
I love almost everything about the game except how the feul works. Since i don’t make in game purchases, I’m unable to refeul. I get abou 15 minutes of gameplay, and about an hour of waiting for my feul to become back in stock.

James Valleroy March 12, 2017
Really fun but gets super laggy when you go in caves, gets a bit frustrating.

Will Mitchell March 8, 2017
Can you make the the things that you have to pick up not so heavy and tell us the alttetuied

gary amole March 21, 2017
Amazing! I love the effort and the looks of the helicopters! One great addition though would be the fastest helicopter in the world, the Eurocopter x3????

D Marshall March 13, 2017
Please get rid of the rechargeable energy I want to play this game more but this limits me

chythanya v April 18, 2017
It is just awesome better than the plane fighting games.it is just the best game I ever played

Lukasz Magierowski June 2, 2017
A challenging and fun helicopter game! I really like the control concept, too

Eli Benji March 7, 2017
Awesome..fun game the controls are pretty much perfect and it will keep you busy playin..kudos

Rex 369 July 20, 2017
I do not really like i would keep the game but now that you have to wait 10 minutes untill you can play again that is just ridiculous

Lorne Stekman March 4, 2017
Different to get used to but once it did I am addicted

Mihai Stoean March 13, 2017
This games crash!!!!!like for no reason just crash in to the home screen!!!!it’s frustrating and i pay the game!!!i should recive a bone form this horible crashes!

ZelL PLaYs June 12, 2017
There is a little problem I cannot update the game pls fix

pplpp9 De August 26, 2017
The game is good and all but…… I bought something in 2017 andUninstalled the game and now reinstalled and it will not give me back the coins I bought

Dawn Nicola Warwick March 6, 2017
It’s good but it doesn’t work now when I go on it just goes back to my home screen