Teenager developer alert Wrong spellings like ” Feedbeak ” it must be Feedback and Launch not Luanch, No Game not Not Game. The only question is, are you devs little kids or young people from 18 to 29 years old?! Misunderstooding but ist a great emuletor but do it supports my favorite Sega arcade game Daytona USA 2 or OutRun SP2? Please reply 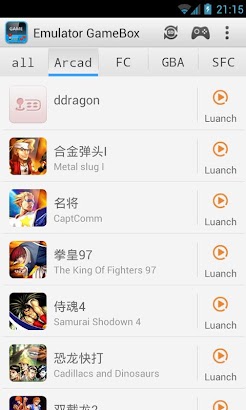 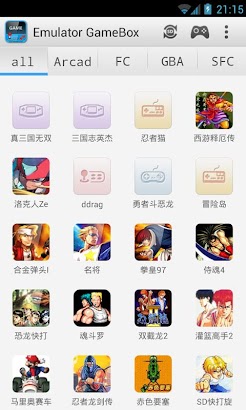 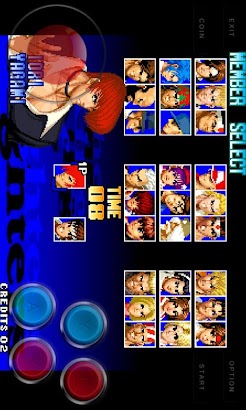 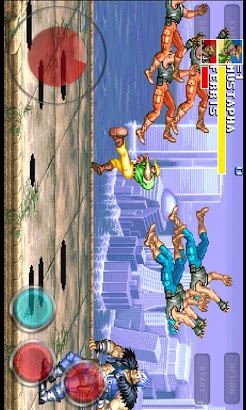 In this new version,You can play the acrade game with your friends through the Net-Play section!

KOBox is an all-around game Emulator,support Arcade,GBA,FC-Famicom and SFC-Super Nintendo game for Android phones.By quickly scaning game files (Rom) in your phone ,you can easily play the classic games.

Before running the Emulator GameBox,You need to place your own game files onto the SDcard or internal storage.we recommend you to put rom file into the default path:sdcard/VSGamebox/roms,then the KOBox will find the games automatically.KOBox doesn’t provide any unauthorized game files in any form.

Relive the Classic Games in KOBox’s world，Just Try and Enjoy it!

thai lan October 23, 2014
Wrong spellings like ” Feedbeak ” it must be Feedback and Launch not Luanch, No Game not Not Game. The only question is, are you devs little kids or young people from 18 to 29 years old?! Misunderstooding but ist a great emuletor but do it supports my favorite Sega arcade game Daytona USA 2 or OutRun SP2? Please reply

Majid Khan December 14, 2015
But i cut two stars becouse my frnds are far away to me and i can’t play with them on same wifi network. So please fix it. I am using mobile data not wifi ?

Jun Tenshi September 8, 2016
Not working . Can’t understand a thing and it it’s all viruses on your phone. Automatically sends random data to their server. . Report this on Google.

Ken Millin February 9, 2014
I’m sure this is very good but I can’t read Japanese so don’t know how I’m supposed to add game’s. I know FC is Famicom (nes) & SFC is Super Famicom (snes) but I still don’t know how to add game’s, having to uninstall due to language issue’s, shame really…

LittleOwl01 September 2, 2015
I CANT PLAY ANY GAMES AND IN HOT APPS THERE IS NO GAMES WHY?

Lanie Fajardo August 24, 2015
When I get some game can possibly work here,, I already had this kobox but its still empty no games available after dowloading, what should I do to get a game for my kobox? Help me please

Lee Cosgrove August 14, 2016
Instantly asked to access my location (why?!), obviously I denied that so it decides to crash!What little of it I did see was ALL in (presumably) a dialect of Japanese – no disrespect but when submitting an app to a global market predominately used by ENGLISH SPEAKING beings, at least have a loosely translated version (using one of thousands of freely available online translation services) for the masses!

Fûň Føř Ăłľ June 30, 2017
What app that is amazing thanks for this not a bad app I love it because I play my favorite games on it without use my money or any lost butt I have request now you make a application psp who play all the games like gta fifa wwe and many more please I request you work on it and god bless you.

Vusumuzi Mkhwanazi August 10, 2014
Thank you for creating such an awesome gaming platform,it was like a dream wen I downloaded Cadillac and dinasAurs 1 of my favourite all tym classic game and played it through the k.o game box,it deserves a 5 star from me thank u so much guys,it’s excellent,no complains,keep up the great work

Wesley Black March 16, 2014
Work’s great and nice design I would like a list of compatible mame roms thought most I download don’t work on it, And for people who don’t know FC is NES and SFC is SNES. I would love to see more emulators and net play for all emulators.

yogee ndran January 23, 2016
THIS APP IS SUPER BUT I HAVE A DOUBT .I SCANNED MY SD CARD. MY SD CARD HAVING VIRUS AFTER SCANNED KOBOX APP IS REMOVED PLEASE TELL IF THE APP IS VIRUS OR SD CARD VIRUS PASSED IN APP

Xavier REEVIL September 29, 2015
is Launch not Luanch , it need more emulators gameboy color ect…, it doesn’t scan my sd card , 100 mo is kinda a lot , and need a cheat enginefor all emulators

Syed Faizan Gillani November 21, 2015
I’ve downloaded it but it doesn’t have any built in game.. Now how can i play games which are shown in the screenshots? Please help.. Thanks

Jairo Narvaez June 4, 2014
The scan doesn’t find anything on the SD of a note 3, Retroarch works better. Please add a way to add paths or Roms manually

Nikhil Konvicted July 2, 2014
I dont think it plays any game tried so many roms but not playing everytime it shows its corrupted thats what it does on my samsung galaxy core.

cian thompson February 4, 2014
Why does no game work other that pre installed games. NEEDS MORE DRAGONBALL Z GAMES THAT ARE PLAYABLE AND IN OUR LANGUAGE

Kyle Johnson February 1, 2016
Now it just crashes when I try to open

Jin Fa Xu March 26, 2014
You need to add fast forward function in gba . Btw Can we play gameboy color in this emulator , if it could it would be perfect . Please please 这个可以玩 gbc 就太好了 ，呵呵 。。。。。。

Mzukisi Xhali November 20, 2016
Plz make it suitable for android 5.1 and higher, now it won’t open on my phone I have uninstall and reinstalled it a dozen times still gives an error

Jerry Cadigal June 3, 2014
Please release me let me go for i dont love you any more,,please give me some metal slug x for games

Parshant Chandaria January 3, 2017
Check out the door and the Twoxjv Strings I don’t know what hkbvI’ll bight WY I don’t know what to do it again and again I will have the best thing that try to get it right to do that

Bavuyise Ntlabati December 6, 2015
Android 5.1,1G RAM but still this thing won’t open…keeps saying it has stopped before it could even open

Lebogang Gift August 9, 2015
I can’t get the game I want …it says no game found….poor it’s a waste of data …just remove it from the play store

Nimrokk Trollscream March 9, 2014
I dont understand the language.. i wish it has english language option.. these games are the games of my childhood

Emmanuel III Galleto June 24, 2015
Im dissapointed.expecting this emu is working. Does not work on mame and gba..only works on snes.

Yash Sharma November 8, 2015
Doesn’t work on lollipop and can anyone tell me the name of the games in screenshot

Coolguy aman February 18, 2016
I am able to play only 3 games but in the above pic is shows many games. How to open other games

Saurabh Ghosh September 20, 2015
Was working until i upgraded to lollipop, now it crashes each time it is opened.

irene grace Engasta October 7, 2014
I downloaded metal slug rom. after I finished it loading on the emulator it say unsupported? need help

Suresh ShyAmdasani November 8, 2015
Doesn’t work at all repair it nooooooowwwwwwwwww

Prakash Mishra December 4, 2015
It crashes every time i run this app!!! No ran even one time!!! I have moto x play
Tags
龙凯