The #1 Flight Simulator for the iPhone is now available for Android!

Has got good potential BUT…… Its very difficult to control the plane. I’ve played lots of games and does not seem to be getting easier.A calibration mode to set up your device would be a great help im sure. Graphics are good as is the potential for the game but needs a some refinement to get a better ratting. 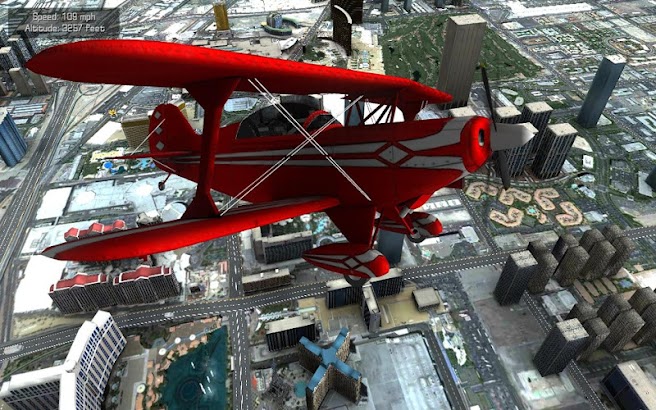 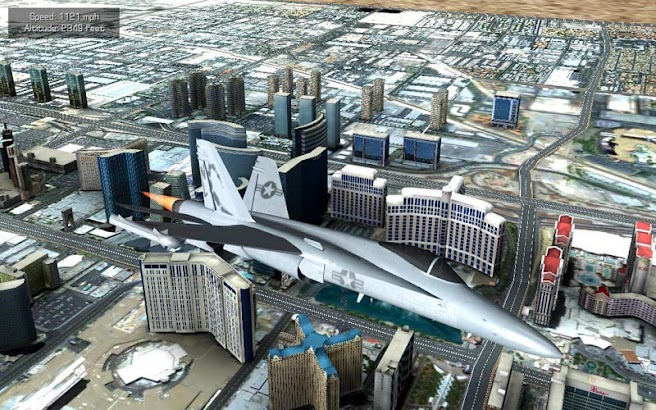 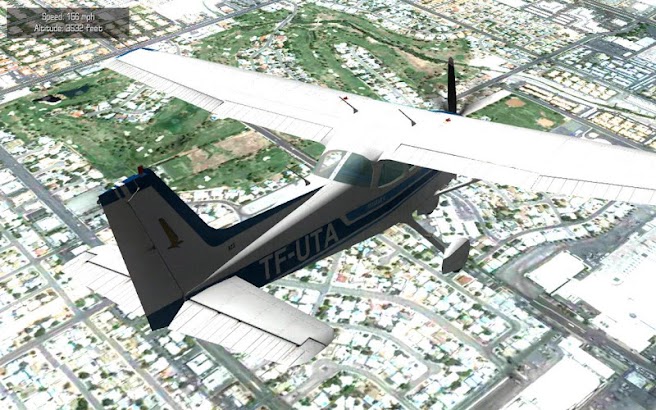 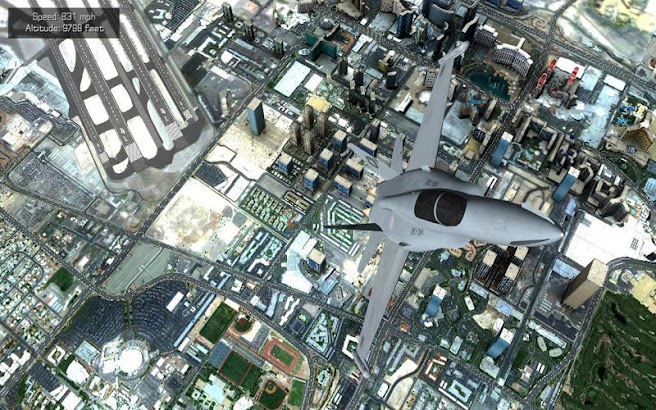 The #1 Flight Simulator for the iPhone, with over 4 Million Downloads, is now available for Android!
Try the game for free!

Enjoy flying over the city of Las Vegas in one of 8 unique aircraft. Explore the city or embark on a campaign of missions for the Las Vegas Mob Boss.

Over 130 sq miles of the city of Las Vegas are modeled in incredible detail.
This level of detail hasn’t been seen in any flight simulator on any platform.
The famous Las Vegas strip includes over 50 hotels that are modeled with photo realism. Fly past the Luxor, buzz the New York New York, or attempt a landing on top of the Bellagio.

Flight Unlimited also features street traffic, a first for a mobile flight simulator. Cars, trucks, and buses zoom around the city. Can you and your plane share the road?

This is without a doubt, the most graphically advanced flight simulator in the app store. Weeks after flying you’ll notice meticulous graphical details for the first time. Tires smoke as the plane hits the ground, aircraft metal deforms in a crash, the Bellagio fountains spring to life, sun glare blinds your view, and more.

The Flight Unlimited team is dedicated to providing game updates.

– Optimized graphics depending on the device being used. Some of the best visuals in the app store.

*Note – If the game crashes its a memory issue, please restart your device and try again, it will work.

Tim Tricker February 22, 2014
Its very difficult to control the plane. I’ve played lots of games and does not seem to be getting easier.A calibration mode to set up your device would be a great help im sure. Graphics are good as is the potential for the game but needs a some refinement to get a better ratting.

Brooke L December 16, 2013
This game runs flawlessly on my Note 10.1 2014. The calibration seems to be off, even if I reset it during flight, but it’s manageable, and the graphics are beautiful! However, there’s just not enough to see in the game to warrant buying the full version. What is there is very detailed, but I’d get bored too quickly seeing the same things over and over again. Add more content, locations, etc and I’ll gladly pay for the full version! Thanks!

UnknownFebruary 28, 2014
Decent graphics but the physics are way off. Stalled on a flair in the C172 at 53 kts. Stall speed for a 172 w/ flaps is 42. I also couldnt take off until about 60+ kts. Real life is about 48kts. Its a little glitchy as well and my phone is pretty high end with tons of memory left etc. Nexus 4!

Cameron Graeber February 7, 2014
The game has potential. The menus are very nice, the graphics are excellent, and physics seem good. But the fps is so low that it’s unplayable. On my s4 I’m getting about 5 fps. Maybe needs optimization? I’d reconsider if it was fixed.

Michael Lazarus February 6, 2014
First of all, it lags on the S3. Even with all the crazy lag going on, I decided to give them the benefit of the doubt that the game was actually good. Nope. Wrong. This is a demo. Cut out after 5 minutes of horrible gameplay and prompted me to buy the full version. Ha! I feel as if they owe me money for wasting my time, but I won’t ever see it. Uninstall.

Steven Corum March 27, 2014
I hope this game drastically changes for the better or at least get a refund. I see the potential in it. Running a droid maxx. To choppy the f18 made lots of clicking noises. I do give the developers credit on the graphics. U should add a c17 or c130 and do a paratrooper drop. AIRBORNE.

Albert Yang March 11, 2014
I waited to get this app and when I got it, it loaded for a long time and showed nothing but a black screen. That means that I wasted 108 MB for nothing. Also, this app is Flight Unlimited: Las Vegas, not Flight Unlimited HD Sim. Forget it.

Daniel Harvey November 29, 2013
I have a HTC one which is a high end phone, and should be able to play this on high graphics and yet it struggles on low. Barely 5fps by the looks of it. Needs extreme optimization before I would even consider purchasing. I’ll try it again on my nexus 5, 7 and galaxy s3 eventually but still it should run no problem on a brand new HTC one

Robin Jacobs February 23, 2014
You’re lucky if you can even get into the air without it crashing. It’s at least a good way to make sure you never reach the maximum demo time.

Miles McDonald February 11, 2014
Works great on Nexus5 4g LTE. Only thing I notice is the sound of the engine’s go haywire 75% of the time. Over all a great simulator. Paid for other planes. Any Updates Coming??

Joel Davis January 1, 2014
I have an HTC One M7, with the Snapdragon 600 SOC, the second fastest SOC available behind the 800. Even on low settings its not very smooth, so im not sure what device this was tested on but something needs to be done. A top end modern flagship should at least work well on medium settings at the minimum.

Tom Swift February 7, 2014
Probably the best flight simulator I’ve played on android not sure about the ‘gta’ style missions though would prefer more realistic missions like taking people on tours or picking up cargo. Would also like to see bigger aircraft

Ken pilotkenb January 28, 2014
TImes out after 4 minutes of flight.Fun Flight Simulator unable to even use it for 4 minutes when it stops flying and they want you to buy it. Couldn’t fully test because of this, uninstalling.

Julian davy February 26, 2014
This game fails to run at a playable frame rate even on a top end device (sony tablet Z) with the in game graphics options turnednto minimum. This isn’t worth waisting your time downloading and I wish I had read the reviews before I downloaded it.

Mark Mcdermott April 5, 2016
Absolute horseshit,it stutters and stammers its way through gameplay,it must have taken at least 2 MB to make this CRAP..!! ? developers need ? for this garbage…

Jonathan Gloudeman October 31, 2015
Has soooooooo much potential but it’s frame rate lags HORRIBLE. Expand flying zone and slow frames and this could be a hit not to mention my favorite game.

Russian Champ February 13, 2014
This game is horrible….lags out on me all the time… And only getting about 2 frames per second…. Needs fix now…. Don’t wast money on it!

flame sword April 7, 2014
It has lots of planes so people know a wider lot of planes.The graphics is not so good BUT still a great game.

Tim Tricker May 30, 2014
You can only do one mission and a four minute free flight. Then pay! Would be happy to pay if there was more to tempt me for free. Worked well on Sony Z2.Removing

Neil Robbins August 18, 2014
Using a high end device and its still lagging even on low settings.

matthew kenny March 3, 2014
If I could afford the full version I would get it since I have zero lag on my Nvidia shield

Chris Hacker January 15, 2014
It’s not a very good game, laggs really badly, playing on an LG G2 with a snapdragon core, so it never lags, somthing is up with this game, FIX IT!

Justin Arizola December 30, 2014
I tired playing it on my tablet and the calibration wouldn’t even work . I’ve played other aircraft games that have to be calibrated and they worked for my deceive

urmila dwivedi November 23, 2013
Played the game but thats not gud enough so I have it 4 stars

Timothy Abernathy November 30, 2013
I ran this ona galaxy note 2 and it was so jumpy, on the low end graphics, that I couldnt play it.Get xplane 9 or infinity flight if you want to play a flight sim on your phone.

Leslie Spike January 2, 2014
Didnt optimalized well, I think it shouldnt have to lagging when everything else is closed, on a quadcore, tegra 3 device.

Bradley Patterson February 14, 2014
I’ll echo others comments.Frame rate on low settings on HTC One (M7) is unplayable.This is unacceptable.My phone isn’t an old Desire HD, so this game should work.It doesn’t, so uninstalling!

Jeffy Jeffy From 7 Jeffy October 1, 2016
The street is flat. This is not gta v make the streets look better

Sebastian Tham December 29, 2013
This game is the worst plane simulator I’ve played.its so bloody laggy even when you just shift the camera angle sucks!

Tommy Solen November 27, 2013
Its so laged up that it takes me 10 minutes to take of its rubish and 1 plane I got 1 plane thanks a lot

jason gamble March 17, 2015
I would expect this on an old single core phone, but I shouldn’t be getting 5 fps out of my note 3.

Alex Sebastian April 20, 2016
can’t commit iap forthis game not unless a f 35 or a f22is in it and dogfights as well just fly around Vegas was a good sim flights for me game needs more mb to run smoothly

Sam Wilson May 24, 2014
Its rubbish all it is four minnits of flying then it wants u to buy the real version its just dog poop :'(

Paul Scott December 12, 2013
Learn how to make a game you complete and utter dimwits.my 7 yrs old does better than this hahaha