This is the official app for the hit TV show My Babysitter’s a Vampire!

I Liked This Game.. I used to play this on the pc and loved it. I really want to play as Benny or Boltz but I can’t so I haven’t played yet… I PURCHASED THE ULTRA VERSION AND THEY STILL WON’T GIVE ME THE CHARACTERS. Fix this please, or your review is going down to one star and I’m uninstalling this game. 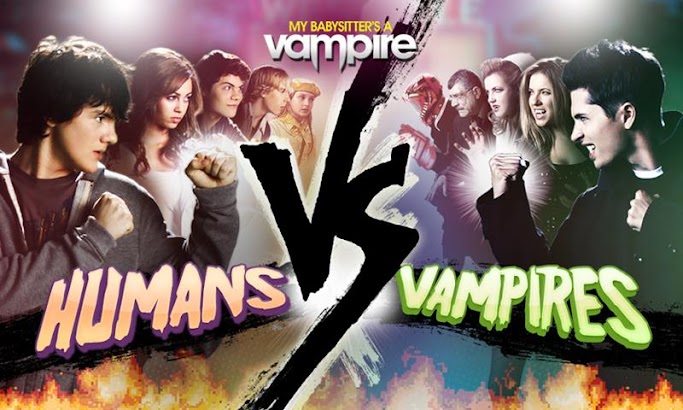 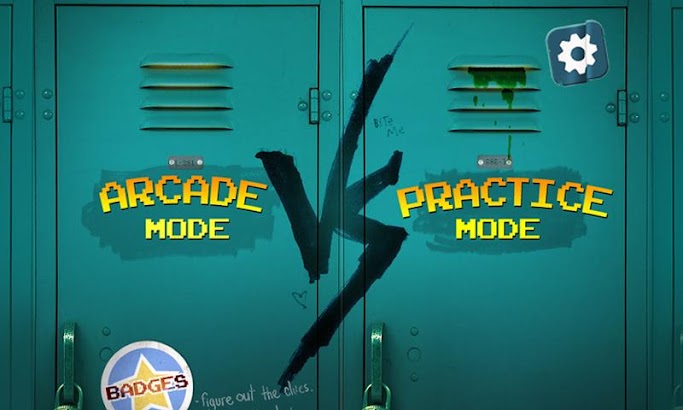 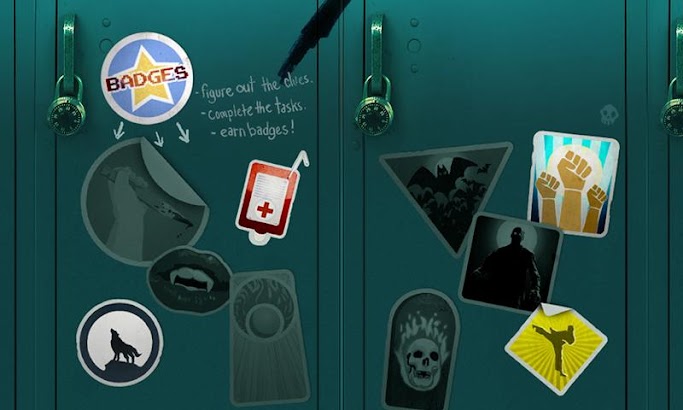 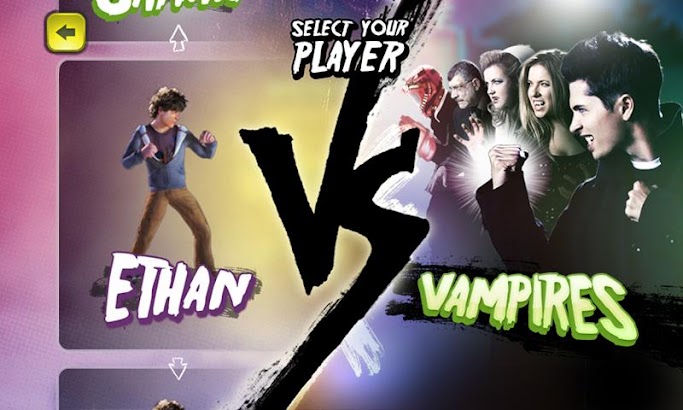 Humans VS Vampires is the official app for the hit TV show My Babysitter’s a Vampire.

Ethan, a socially awkward teen, Benny, his magic-loving friend, and Sarah, their good-gal vampire babysitter, are trying to survive and save the town of Whitechapel from zombies, bloodthirsty vampires and terrifying demons.

Will you be one of the good guys (and geeks) fighting to save Whitechapel? Or if you prefer, become a character from the dark side and battle to return the town to its dark, disturbing roots.

YOUR ARSENAL: Over 30 battle moves to defy your opponent.

UNIQUE SPECIAL MOVES: 3 flashy special moves that only you can pull off.

JANE, Ethan’s annoying younger sis’ who makes up for her size with speed and agility. Look out for her flying mini-donuts!

SWEET BADGES: Unlock all badges with Ultra, too, decoding the cryptic clues to get tipped off on how to paste another one up on your locker.

5 BACKGROUNDS: Play through day and night in the ‘burbs, at school, outside the cinema and in a creepy graveyard!

5 LEVELS: Strive to beat Arcade Mode and survive your 5 opponents. But beware – your rivals get harder as you progress to fight the strongest Human (Ethan) or Vampire (Jesse), depending on which side you choose.

Get ready to save the world – or suck the life out of it!

Hannah Stacy October 26, 2014
I used to play this on the pc and loved it. I really want to play as Benny or Boltz but I can’t so I haven’t played yet… I PURCHASED THE ULTRA VERSION AND THEY STILL WON’T GIVE ME THE CHARACTERS. Fix this please, or your review is going down to one star and I’m uninstalling this game.

James Bond March 18, 2016
That’s mean. Vampires v.s. humans is not bad. You make it seem like it but it’s fun not boring,corny,stinky,wierd orhorrible. I’m 8 years old and I been watching the shows of my babysitters a vampire when I was 2,3,4,5,6,7,8. Those were my ages when I watched my baby sitters a vampire.

Lori Mahr June 19, 2014
paid $.99 to unlock additional characters.App says the unlock failed, but Google Play says the purchase was made.Tried to restore purchase, and it won’t work.Either unlock the characters, or give me my money back.

InfernalDragon April 8, 2014
This is great I love the show and now I love the game too bad I don’t have a lot of money left on my card oh well I can wait until I get another card hopefully soon and I am also glad they have Erica in this I met Kate in real life she’s a nice girl and she’s beautiful I got and Ada graph picture of her in a frame and I also got a picture of me and her together I.

Iris A. June 27, 2015
This game is great but simple. When you first get this game you can play as Ethan or Jesse. You can earn badges,and you buy this game you get new characters that you can play. I only have one problem when I want to buy it has problems with loading. The show is Canadian, and so this game is probably Canadian

Madison John February 24, 2017
It is fun but the characters are mixed up. Rory and Sarah are vampires. And you should do 2 characters free(2 boys one from both sides and 2 girls one from each side) ’cause somegirls don’t want to play as boys. I don’t mind playing as a boy but I’d prefer to play as a girl. And some people don’t want to pay just for that. Thanks for reading. I hope you will make changes in the future.

Bailey Halliburton September 12, 2015
Iove this game itmakes me wat to be a vampire even my dad and my mom likes it they say jessica do yiu still have the vampire vs humans i say yes do you like that game she says like it i love it

Christopher Lucas June 13, 2013
I think u guys should fix the part like when many ppl cnt run fast. .and then fix the part where Sahara cnt really fly…. The vampires should b able to fly…… I think I should make Sahara faster than everybody… then make Rory second… Erica third…..♥♥Thx this will mean so muchIf u fix this thanks

Scott Knight June 28, 2014
My purchase didn’t even go through. I wish I could give it zero stars ?? I want my money back or my stuff gets unlocked

Shy Brown January 2, 2016
I am a big fan of my babysitter is a vampire but the game kinda laggs (i don’t hate the game).But anyway the game is good P.S my real name is Shaine Hearns

Zarina Tenorio March 2, 2014
Babysitters vamp. are so cool but this game has lowgrapics hard joystick and its too long like 81.98mb but when i create this ill make it 6.27mb next time fixed this and ill give 5 stars

Alina Herd August 7, 2014
It’s actualy good I thought that it was going to be bad but it is good but I wish it could have more like mini games make a few more mini games than I would rate it 5 stars

NicotaaXO January 2, 2015
But I hate the way that u can’t win a round and u have to pay for other people plus the rest of the game and badges

Edita Dzubur April 21, 2013
I LOVE MY BABYSITTER’SVAMPIRE but this game has the worst joystick, graphics and evertthing. Don’t make good tv shows a piece of shiet game.

Brian Suttles January 9, 201
5
Stupid thing! I paid 99 cents to get the ultra version, and it doesn’t allow me the advantages of ultra. I tried buying it again and it said already bought, even tho I don’t have the new characters. Fix it

Max Bradz January 25, 2014
Only a few levels and too easy i won every level and opponent first go and was only hit 3 times by all the opponents I finished the whole game in about 10 mins

Amari Phillips October 25, 2014
I bought all the character and now the game is freezing I am highly. upset and if you don’t refund me or fix this I’m suing do you understand do you hear me I AM SUING!!!!!!!

Vlad G. October 5, 2014
It brings back the memories of all the episodes in My babysitters a vampire, I really hope they come out with enough money to make that second movie!

Kiara Squires December 17, 2014
I think its cool but on the tablet u can’t add any money one i think that it well be awesome if u change every thing to free

Savageboy210 logan February 5, 2017
I think is really incrediblevits really awesome if there were real vampiresI would let them bite me that’s why I love this game.I am still playing this game my favorite character is Jesse nurse vee Ethan Sarah Erica Benny Jane and boltz

Branndon Patrick May 10, 2014
Won’t download only once and it lagged don’t get the game.

Anjli Srivastava July 15, 2015
Please don’t loading this game becouse game is no work and data is going to empty …?

Shakeem Spencer June 10, 2014
U people are haters this game is cool its just your to cheap to buy or don’t have money in that case its OK but don’t hate flip you haters

Singh Rajesh April 13, 2014
Itsnice i love it . I like vampire the most . Yes its aboutthe fight ofMAN AND VAMPIRES you shouldplay it . And i am sure you will like it.!!

Ali Gaming November 16, 2014
I love fighting games and this is the perfict game but it should already have characters and badges unlocked without having to buy the full game

amy murgas May 21, 2015
Try beating the game one it might start unlocking charicters.In other games i play i play to earn the charicters.After you make the in-app purchase

Deidy Sapon June 15, 2014
It is horrible and I don’t like how you have to pay one dollar for my characters and badges like wtf

UnknownMay 7, 2017
It amazing awesome cool I love re-vamp the mist when Jesse bite Ethan and Sahara saved him it was cool ant cute I think she like him but she dose not want anybody know because he’s a nerd but I think he not he’s awesome and stuff in love it.and the one when Ethan and Benny were screaming because they found out she was a vampire I was laughingmy but off.And Ethan he was screaming like a girl that was funny and I know that you know that everybody knows that Ethan has a total crush on Sahara and her and Ethan make a pretty mach for each other.but anyway this game is ccccccccoooooooollllllllllllllll.???????????

Megan Craig December 18, 2014
My babysitter’s a vampire is awesome. Huge fan.Controls take a bit of getting used to but great. fun

Jeff McBride May 2, 2015
Got boring after a minute of two!! DONT INSTALL THIS GAME GETS BORING!!

Monique Watson February 12, 2015
Jesse is so hot even know he is a vampire but one thing I is my babysitter an vampire the move and I love there shows Ethan must really like Sarah but ercia is so mean in that one episode she took the blood out of the blood truck and she did not let Rory in to drink the blood with her and she just want a to eat everybody I wat
ched the whole episodes and the whole move on the movie I like the black vampire dude he is hot but no hotter than jesse

Janie Garza October 30, 2015
I hate the zombie princable itcan’t do nothing

Geraldin Parra March 18, 2017
Its a really good app it doesnt have that mush adds and im a really big fan of mu babysitter is a vampire i lovesd this app people shoul download it.Please give me a like if you like this app !!!!!!!!

Angelo Hampton December 14, 2013
This game is so awesome it’s based on the show! I am the number one fan of my babysiters a vampire

CearTrap September 7, 2016
I love this game soon fun and I love the show my fav. Also really in love with atticuss, if u don’t know who that is u R not a true My Babysitters A Vampire fan.

Kevin O October 30, 2016
How do you play this game?
Tags
TheSecretLocation