Roll and jump down the infinite rainbow road. No guard rails, no safety net! 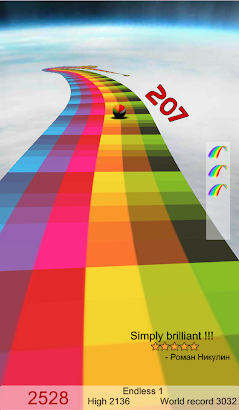 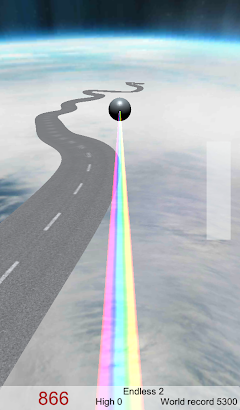 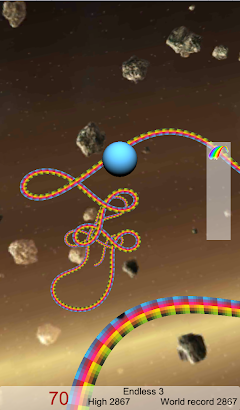 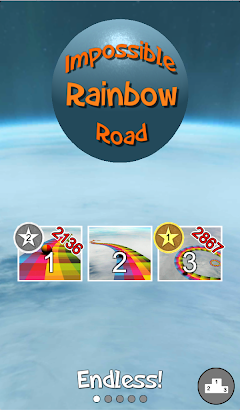 An indie physics-based 3D-graphics game that’s easy to understand and fun to play. This version contains both the endless tracks of the original game and the one-minute-dash tracks of Impossible Rainbow Road 2.

New players can start with the Easy-Dash level where the roads have guard rails. Work your way up to the Endless tracks where you’re flying through space with no safety net! Eventually you’ll discover how to skip down the road like a stone skipping across water for massive scores.

* Tilt your device left or right to steer. Or tap on the sides of the screen, depending on your chosen control technique. (I find that tilt is the easiest technique but perhaps not as precise.)

* Touch the Pause button after the start of a run to pause, restart, or adjust your options.

Each track keeps its own score. If you get a score high enough to be considered for a medal — one of the top three in the world — you’ll be asked to pick a nickname for posting your score to the central leaderboard. (You can choose not to enter a name if you don’t care to see the leaderboard. You’ll still be able to see each track’s top score.)

Some tracks give you the ability to hop. Hopping is essential to jump over the nasty puddles in some of the Dash tracks, and to get back on the road in the Endless tracks.

Fix an occasional crash that arose from the latest version of the ad library.
From the previous release: Increase the max sensitivity, thanks to feedback from user Firepal.

merlinsdog June 30, 2017
This is a really bad game! Some of the levels are impossible! Don’t waste your time with it!

Dragonogon August 7, 2017
I noticed that in the endless levels, the ball just falls forever if it falls off the road. So, I think you should add something that makes it so that when the ball reaches a certain point, it resets the ball back to the beginning of the level.

Developer Long Road Games August 18, 2017 Ah… in the early days the ball would automatically reset itself after falling for about 10 seconds, but some users complained that there was still a chance of hitting the road below, so I removed the auto-reset. Your comment tells me that it wasn’t clear how to restart manually — tap Pause and End. I’m showing a hint after 10 seconds.

Developer Long Road Games August 18, 2017 Thanks to your comments, I discovered a bug lurking in the endless tracks.If the world’s top score got big enough it caused a crash. Fixing it now!

Developer Long Road Games August 18, 2017 Thanks to the user comments, I discovered a bug lurking in the endless tracks.If the world’s top score gets big enough it causes a crash. Fixing it now!

Jason Olesky April 16, 2017
The ads at the top of the game window makes​it nearly impossible to play, move the ad somewhere else

Developer Long Road Games April 19, 2017 Thanks for the feedback!You’re right and I didn’t notice it. I’m about to release an update to adjust the camera angle.

Iittle Phinex Schreiner April 19, 2017
All it did was glitch out my phone I couldn’t eaven play

savannah banana April 10, 2017
This is the most dumb game

Devan Carpenter December 12, 2016
Some people just don’t get the brilliancy of this game.

UnknownDecember 13, 2016
This game is awesome I think that everyone should download it

Debbie Harrison December 30, 2016
It’s good when it comes to buy it

Splash Victory October 14, 2016
Many people think this game is horrible.I find it confusing at first but then it turns out to be Amazing! This game defiantly deserves 5 Stars!

Aquatic Sparrow November 15, 2016
All your doing is rolling on a path, getting blocks, and bouncing your way to the finish (which is when you fall off), then this game is for you

_dendo _ October 29, 2016
I love it because it’s addictive and there’s loads of cheap knock offs that aren’t sensitive enough, are to zoomed in, but this is amazing

Developer Long Road Games April 17, 2016 Thank you!You’re my first review after the big update. What was annoying about the ads? Was it a certain type of ad or just plain too many?

Ashwin Kumar November 23, 2014
Very nice game. I play, I enjoy, I feel good. Good graphics and space backgrounds. Nice sounds also. But your banner ad covers up the HUD, and I can’t see the current score. Fix that. And add Google Play score board for seeing who’s the highest scorer. Good otherwise. 5 stars.Edit: It happens sometimes I guess. I just got off playing now, it did not hide the score.

Developer Long Road Games November 23, 2014 Thanks for the thoughtful review and feedback! I’m going to need to dig into the banner-ad-cover-up problem… first time I’ve heard of that happening. I shift the entire game window down by whatever height is reported for the ad, so in theory this shouldn’t happen. Is it happening for all ads or only occasionally?

Ace Cabbie November 16, 2014
Great fun game. However on insane since the balls so jumpy and the path recreates itself toward the bottom its actually easy with no challenge other than being if you let the ball fall for too long it ends. the game is relaxing and fun but i think this should be a fun mode with options to select weight of ball..also a story mode with actual levels and less jumpiness..or near no jumpiness in levels.it is a fun relaxing game though

Matilda Sollitt January 2, 2016
This game is great well for me I get that it isn’t for everyone but if ur like me who likes to focus on something so simple and do it for ages to prove that u r the best which leads on to a little thing that bugs me it would b pretty cool to see other people’s scores, cheers for reading hope this gets noticed and has some used to anyone. If it doesn’t u don’t care I just wrote this at quarter to three in the morning. ?

Alexander Williams October 25, 2015
The one thing this game needs is an online scoreboard. Leave the glitches in, just let us compare scores. I honestly feel that will make the game better

lucas sinnig September 19, 2015
It’s a pretty fun game and flying through the air gets pretty crazy but I must be too thug because when I get going on my bounces the track can’t keep up with this playa haha

Daniel Williams May 2, 2015
Controls are sloppy, often I’ll tap and keep turning after I let off the screen, and VERY VERY bouncy ball

Viren Sond September 8, 2015
The game is really good but the ball sometimes just starts to bounce even while on a straight path!! Fix that and I will give five stars.

Caleb Edwards November 29, 2014
Supper addicting super fun just got a high score wish its was linked with Google so I can compete more easily other than that great game

Rainie October 4, 2015
I totes was expecting to just return it, but I soon realized that, I wasn’t going to return it.:P

Ellie King January 18, 2015
Once I got to 1000 the little blocks start to glitch and fling you off the road

UnknownNovember 20, 2014
The sound effects are literally what clip art would sound like.

Akash Mighty November 5, 2015
When i was playing i went under the road and the ball just got stuck under in the road.

Diego Khayat May 7, 2015
By far the worst game ive ever played