Draw walls, escape politicians and save the galaxy!

Was pretty fun (and funny) until I tried the final level. Seriously? how am I supposed to beat that? By the way, please make the Jetpack/American Eagle be controlled by finger, not tilting phone… 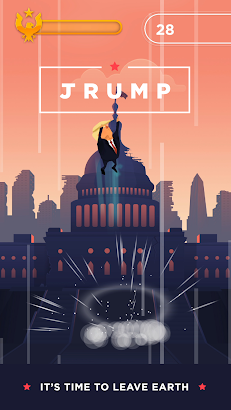 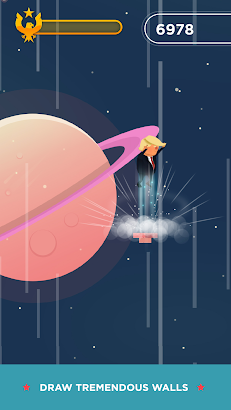 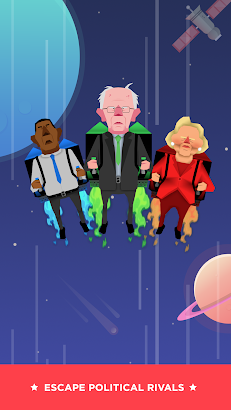 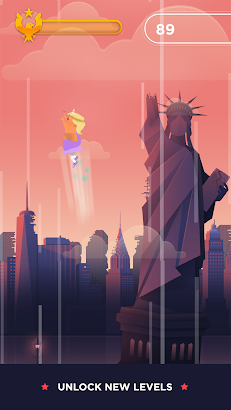 Donald Jrump has destroyed earth and there is hell toupee. With his work now done, draw walls, escape politicians and make the galaxy great again.

The year is 2017. Following Donald Jrump’s successful bid at the 2016 US election, international borders have closed up, global warming research has halted and brick sales have increased at a staggering rate. With the world now in utter chaos and his tiny hands growing increasingly sweaty, its time for Donald to leave to make the Galaxy great again. How? By jumping on his favorite things in the world… Walls!

DISCLAIMER: For humor/satirical purposes only. Not to be taken seriously. Reference to any celebrity or other person does not constitute or imply sponsorship, endorsement, or recommendation.

nwswisher 02 April 8, 2017
Was pretty fun (and funny) until I tried the final level. Seriously? how am I supposed to beat that? By the way, please make the Jetpack/American Eagle be controlled by finger, not tilting phone…

Patrick Grundy July 7, 2017
My cousin had this game and I tried it. LOVED it. Then I tried to get it on my phone and its stuck on the beginning credits ?

Osama been laggin April 19, 2017
FunnyPlease update the game bc of recent events there are a lot of potential ideas/satire that can be added

sparklez Hunglow March 14, 2017
IT WILL NOT LET ME PLAY AFTER I PLAYED ONCE IT RUINED THE GAME!!!

Jerry K July 23, 2017
Love it watch the wetbacks fall from the sky… Gotta love the trump!

Jake Rogers January 14, 2017
The gameplay itself is ridiculously good, but after my hundreds of ‘trump spins’ for free rewards I’ve not once received anything more than ‘no win’, ’25 jrumples’, or ‘free spin’. Nevermind the free characters, 150 jrumples or 500 jrumples! It breaks my heart every time

Leon Hook February 13, 2017
Calling the player a loser is really upsetting and sad. You guys who made the game have no life or self esteem

Raptor987 123 December 18, 2016
Very good game but too many ads would definatly recommend.It’s yuuuuuge, tremedous. 1 problem though the last update erased my progress.

Travis Armbrust January 8, 2017
Every time I open the app, it just gets stuck in an eternal boot loop. It just shows the same logos over and over. Please fix

Le bored Hawaiian December 21, 2016
Good game buy often restarts out or nowhere so I lose all progress even when I am signed in.

Joe Burton December 11, 2016
Just restarts the loading screen over and over

Pavan Dharani January 22, 2017
The game crashes as soon as the dynamic changes- like when the bosses are supposed to come, or the Donald gets a jetpack.

Adhil Lawton February 4, 2017
It’s Soooo fun. It’s such a simple game but, if you watch trump, you would understand how epic it is.

Blue Phoenix February 17, 2017
Its rigged in the spins but I still love it

UnknownDecember 3, 2016
To my surprise, this game is fun and entertaining.I can tell that a lot of work went into making this.I do have 1 problem though…That is something wrong with the score box.The score is showing up almost under the box itself.Other than that I recommend this game!

Miki Amir November 5, 2016
The controls are a bit sticky (probably just my phone) but the game is fun, funny and interesting to play. It’s good to laugh at those subjects from time to time. Recommended ?

Specular Fade November 26, 2016
I honestly love this game, but I’m pretty sure someone either hacked this (which I know sounds retarded) or the app is going crazy. When I open the app, it just repeats the opening part of the app. It would be great if this could be fixed if it’s an app problem!

Raymond van Wyk November 21, 2016
Funny and fun but the adds making me lose… sometimes when i draw a line a add pops up and he falls

Leviticus Bosch November 12, 2016
The game itself was enjoyable, but I, along with many others, have been stuck in a startup loop.

Dylan Rollins November 12, 2016
It’s a Tremendous game really, but somehow it got stuck in a bootloop and I guess I lost everything, my high score, all my characters and levels, please fix.

Венелин Минчев November 20, 2016
So after the new update the game doesn’t even start… It just repeats the credits in the beginging over and over..

Holding onto truce November 10, 2016
I spent a while saving up jrumples to buy every character, and with the new update, it’s wiped all of my progress! Please could you sort this out as me and my friends spent a while on this.

Jacobus Jacobs November 11, 2016
If you have to rig the spinner, do it better. I litterally only get 25
Tags
Oddboy & AppArcanum