Pop balloons by drawing the corresponding symbols to defend the castle.

Some spells are just better than others The spell that pushes all enemies downward is by far the greatest one; it kills many of them and counts them towards your score as well. Other spells just kill them while they’re in the air; they have to fall on the castle for it to actually count towards your score. Other than that, the game is perfect. It just gets boring after a while, which is understandable, as it happens with almost every endless game on the appstore. Nonetheless, the game was well worth all the time I spent on it. Well done, Nitrome. 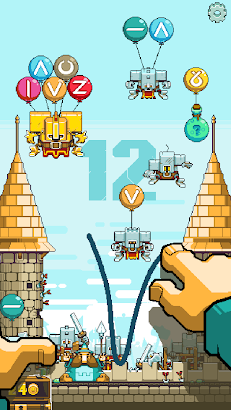 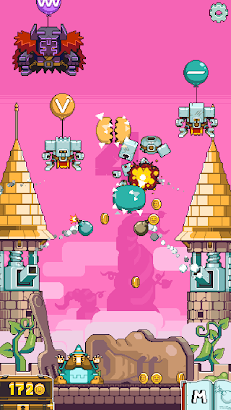 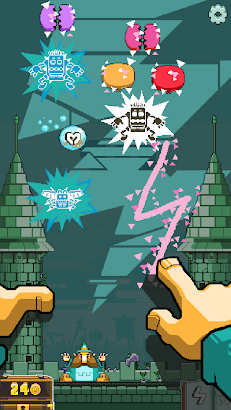 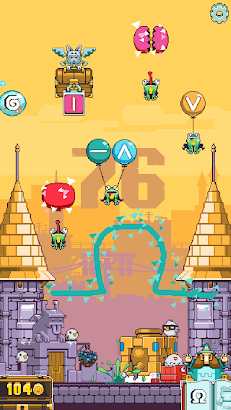 Wanted,
Wizard required for defence duties. Must be proficient in spell casting to pop varying balloon types that may be utilised by intruders. Must be confident working alone and comfortable facing aggressive hordes.

Advanced magic techniques desirable but can be learnt on the job. Applicant expected to provide their own spell book and potion bottles. They also may be required to make tea and answer phone calls.

Applicants should send CVs and potions portfolio to [email protected]

Use you finger to draw shapes on the touchscreen. Match the shapes on balloons to pop them sending Knights smashing to the ground. Keep the Enemy from reaching the castle for as long as possible!

Features:
– Intuitive gesture recognition drawing gameplay.
– Simple concept that anyone can grasp!
– Full game centre support to compete with friends and foes
– Collect coins to unlock new spells
– Slow Down time!
– Turn enemies into frogs!
– Summon a mighty Dragon!
– Cover the floor on Fire!
– Make the Castle Turrets grow Gun Turrets!
– Bake Bread (ok that last one we made up).

Bug fixes:
Fixed the issue with wizards and witches costume swap not appearing properly.
Thanks for playing Magic Touch!

Zak Asis November 14, 2016
The spell that pushes all enemies downward is by far the greatest one; it kills many of them and counts them towards your score as well. Other spells just kill them while they’re in the air; they have to fall on the castle for it to actually count towards your score. Other than that, the game is perfect. It just gets boring after a while, which is understandable, as it happens with almost every endless game on the appstore. Nonetheless, the game was well worth all the time I spent on it. Well done, Nitrome.

Daniel Moore November 19, 2016
The game is fun but they need to explain what the spells do after or even before you buy them. I still can figure out what the unicorns do… also half the time the wizard and the background you buy don’t show up making the game feel pointless. It would also be nice to access the shop before you play a game too.

Daniel Isaac Conde May 11, 2017
The game is really enjoyable. The only thing I dislike with the game is that it is bad at reading the “reverse 3”. It needs to be perfect (sometimes I get it, sometimes not). Meanwhile, other symbols are read the game even when it’s heavily distorted. Please fix this.

Edwin Canales November 18, 2016
The green balloon with a backwards three is really annoying to draw, sometimes it will work sometimes it won’t.You have to get it really perfect for it to pop, please fix this

HamHus January 17, 2017
Honestly I was never so excited in my life to draw shapes This is a great game and so adicting to honesty I’d suggest for people to play it but 1 problem only for me, I’d like it if you can access the shop without needing to lose

Danlord Infinity November 1, 2016
The grey u shapes are so anoying. they aways give me a v, when I see it I know I am going to lose. Make the u more acturate or jusr replace it with another idea, if this happens I will rate from ★★★★☆ to ★★★★★

lianne martinez November 25, 2016
I REALLY LIkE THIS GAME ITS ADDICTING I DONT KNOW WHY ALSO I WOULD LIKE TO REPORT THE BACKGROUND CHANGING BUG IS IT A BUG OR NOT IF IT IS NOT A BUG THEN RATHER PUT THE NORMAL BACKGROUND IN THE SHOP. i am not having trouble in any shapes or letter that i have to make its all easy when i play this long

WMS Stuff September 8, 2017
It’s a really good game!! Not to mention it doesn’t require WiFi, it’s super fun to play on the go! Definitelyrecommend everyone to download it. Just wanted to point out, the game sometimes doesn’t get your strokes, especially the slow down powerup. Other than that, I don’t really get the Time Attack mode, can you put the introduction of modes in the game?

Chong E-Sa November 30, 2016
It is an amazing game and also addicting. The game has a unique concept and I have been playing it for a long time before. Keep it up, Nitrome! (Fun fact: my high score was around 900 :D)

Liv Rose October 26, 2016
This game is addicting but the screen keeps on pausing randomly even when I’m not touching the screen which ruins the gameplay.

Mike DiNardo September 30, 2016
Crashes when I try to open it

Karya N.Kikoy August 25, 2017
Magic Touch: Wizard for HireMagic Touch is a fun, challenging game that gives you many types of game modes and many types of symbols to draw. The gameplay is good, the screenshots of the game seems good, the title of the game sounds BEAUTIFUL, and it has good ratings on it. But, why do you need permission on Photos/Media/Files?9/10

Dannyboi Chavez December 17, 2016
My finger moves faster than the game can keep up with so when their close it wont draw in time

Abdulrahman Albinali December 22, 2016
The only problem with the game is that in insane mode, the king knight has too many balloons.

Alex Lumagbas August 6, 2017
Fun and fast paced. Love the vibrantcolors and the graphics of this game. I love that there are different modes to play in case you get frustrated with one other mode.

Von Riddle September 27, 2016
Love the graphics. The symbols can be tricky especially when the balloons and enemies are so many as the game progress.

Maxfrikandy Siao Hong December 31, 2016
Like this game ,,I loved it so much, but why can’t login to Google play?? So sad but this is interest game??

Cameron McIntyre October 13, 2016
I loved nitrome as a little kid. Matter of fact I just went on the website and played the games I loved playing as a kid. Like hot air, skywire, ice breaker, and many others!

Niya nation December 2, 2016
I love it so easy but test your mind and your fast thinking it is for everyone and anyone so grown-ups pick up your phone and start to play.?☺

UnknownFebruary 9, 2017
I loved how the game was easy to understand but challenging to play. I loved the graphics, I loved the gameplay and if there is a time when I would have to pick one game in the entire world I to play until I die it would be this one. I give this game a big thumbs up ?

Francisco Guevara July 29, 2017
It’s a prettty cool game,But theres a time when the music stops and the game don’t let’s me keep playing (The controls don’t let me draw the shapes)Am i the only one with this problem??If not i would really like the to fix the game ,but either of that it’s a nice game. ?

Ika Vukic October 9, 2016
My friend told me about this game and it is amazing.It also kind of helps to draw symbols and to draw in general.?

Jorgytheswagger B November 1, 2016
I just think it’s amazing first because it upgraded my reaction toward things to be 3xtremly good etx

Dunkmasterflexer March 15, 2017
THIS IS ONE OF THE BEST GAMES I’VE PAYED TS SOGREAT THAT I GOT A 1816 SCORE ON ZEN

Joel Bonasera November 22, 2016
Really fun for those times you want a good arcade experience. Zen mode is a nice addition.

Neroz August 19, 2017
Please fix the “Green Reversed 3” or “E” because when I draw it, it sometimes doesnt work and I always lose to it.

Eman Bugay October 21, 2016
It’s a good game and so fast paced and challenging

Ella Oblinada November 15, 2016
Challenging and addictive. And it probably help you to exercise your mind

Gerald Dolliver October 3, 2016
I played for about an hour. This is a simple yet fun game but it just wasn’t for me.

S Black May 22, 2017
Super fun. Very enjoyable time killer. Can very easily draw you in to continue playing.Really would like a ‘reset high score’ function on the settings page tho.

DicEC August 30, 2017
The idea of the game is silly and for the gameplay it’s really addictive and fun

Joserine Toh July 9, 2017
uninstalled because the app couldnt open and lost all my highscores and money =_= gr8