YOU HAVE TO READ THIS, PLEASE I love the game but PLEASE get rid of the commercials every time you try to play it won’t let you!I WOULD DEFINITELY INSTALL PUG FLIGHT 2!!!!Please fix this!!NOTE TO WHOEVER WANTS TO GET THIS GAME: I’m not trying to be mean, I just want you to save your time and effort.Your just going to uninstall it anyway so PLEASE don’t!!!! 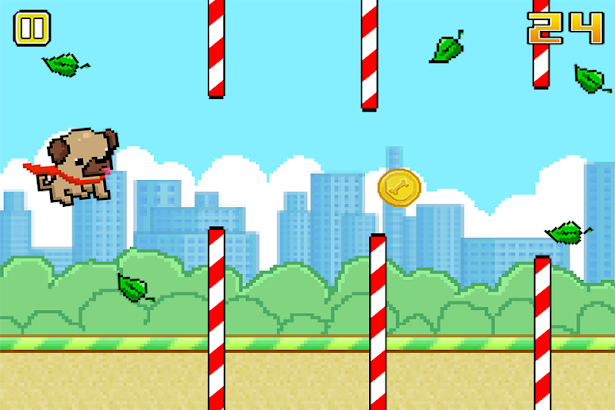 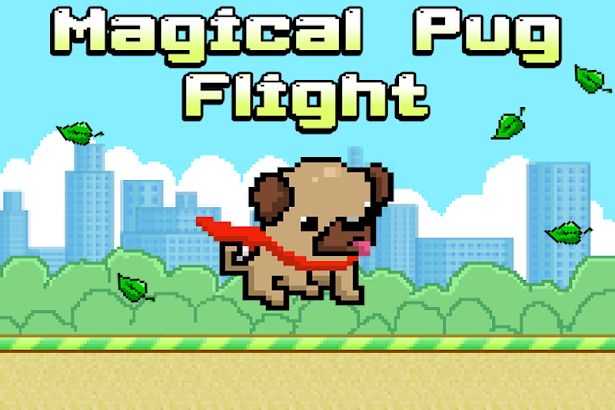 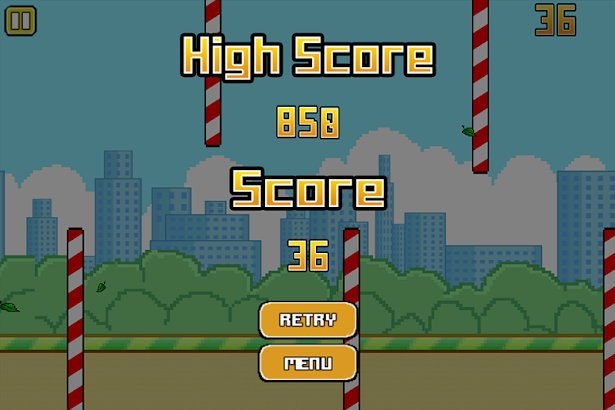 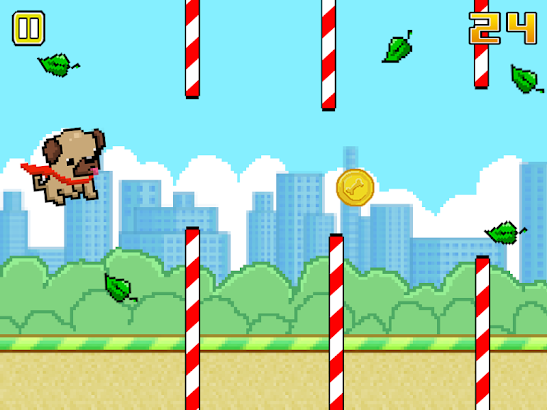 Take flight in Magical Pug Flight and soar to the skies with a Red Caped Pug!

Get blown through the city, and avoid obstacles using skill and precision in this retro, endless flying game!

Avoid enemies like Airplanes and Flying Pigs, and feel the breeze blowing through your velvet ears as you reach for the sky!!

Retro graphics and a Fun, Energetic Soundtrack make this the Retro Game to play for the year!

Grab your cape, soar into the skies, and wear your headphones and enjoy the marvelous soundtrack!

Melody Martin April 1, 2014
I love the game but PLEASE get rid of the commercials every time you try to play it won’t let you!I WOULD DEFINITELY INSTALL PUG FLIGHT 2!!!!Please fix this!!NOTE TO WHOEVER WANTS TO GET THIS GAME: I’m not trying to be mean, I just want you to save your time and effort.Your just going to uninstall it anyway so PLEASE don’t!!!!

Betty Johns February 22, 2014
I love this game since it works very smooth on my phone. also i must say, its a very cute doge… Game play is somewhat like flappy bird but it sure has modifications of its own and its easier too. I am not a hardcore gamer, So I PREFERMagical Pug Flight OVER Flappy

Jillian Ranko April 20, 2014
I love everything about this app.The only bad part is that the adds come up late, so you’re already five seconds into a game when the ad comes up, resulting in death 99% of the time.

Stephen Ralston March 15, 2014
This game is unplayable because of the stupid pop up ads. Please fix because it would be fun if that didn’t happen…

Adrianna Grants February 23, 2014
The game is all about fun. It’s also lovely to see the cute pug flying in the air. Although the game is similar to Flappy Bird, its cute character and unique background make it exemplary. Love it! ?

MrToastySocks March 15, 2014
In mid-game an ad will pop-up and you will more than likely fail. Take out the random pop-up ads. You can show the ads after the player fails.

Amanda Flanagan May 10, 2014
Can’t even begin to play because you get bombarded with ads

Kamal Shah February 22, 2014
I was actually finding such a user-friendly game and finally i found this amazing game. Its sound is so energetic and addictive. 5 stars for such an effort !

Leslie Cruz July 27, 2015
I keep falling because all the ads

Masood Arsalan February 22, 2014
very good game. very entertaining. the dog is really adorable. graphics are very nice and colorful. gameplay is challenging yet fun. I can play this game all day and not get bored.

Katie Graham February 22, 2014
This is such a sweet game!! I really love it. I play it allll the time ? This just makes my day.

Giang Nguyen February 22, 2014
This game is very fun and very easy to play. The game is very nice graphic. I love game. I can play it every day

Brittany Klein February 23, 2014
Good job. I like this version better, Has more options.

Steven Zac February 22, 2014
Now that is a sweet dogiee. I love this game. hats off to the creators .

Revecka Celis February 22, 2015
One thing I hate the most while playing a game is ads. If you love ads, this is the perfect game for you. I love pugs by the way, but not ads. I don’t recommend this game.

steffani arrigo March 6, 2014
Every time u go to play it an add pops up abd while ur playing it adds pop up stupid UNINSTALL

Nicole Scrupps February 10, 2015
I hate this game because: when ever I start a game an ad will come up, hard to control, it loads up when I don’t want it to and it just keeps making my phone freeze

Ruby Hutchinson November 22, 2015
This game is far too fast. And add just pops up then u fall and loose. Poor. ?

Sofia Perez September 25, 2015
I can’t even get to the first pole it lagy and dual

Lucy Blake November 29, 2015
This is STUPID !! I am warning you guys to NOT get this weird Game even though it looks fun.what happens is when you tap at the beginning it goes and drifts to the ground I wasn’t able to even make it past the first pole!????????and its not that I have bad skills

Triggered Chihuahua April 10, 2015
I love this game it is fun and easy but it has too many adds