The third episode of the popular game Make Them Jump is now available!

Good, should be harder though. The game is a decent time saver for sure, but I think the game could benefit from a bit of a difficulty increase. Even on the hardest difficulty you can just spam sword and get well above 200 pretty consistently. You guys should raise the cool down period on swinging the sword. Or at least make an additional difficulty setting where maybe swings have two or three times the cool down for two or three times the points per hit. 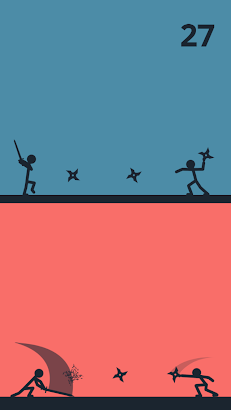 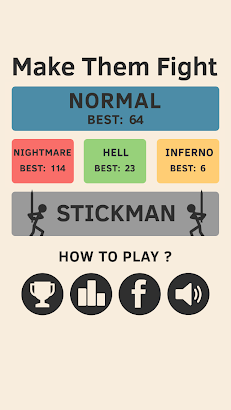 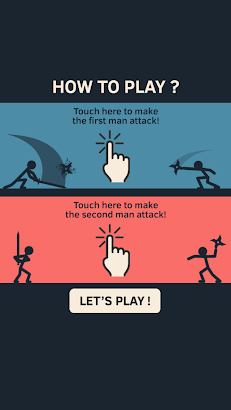 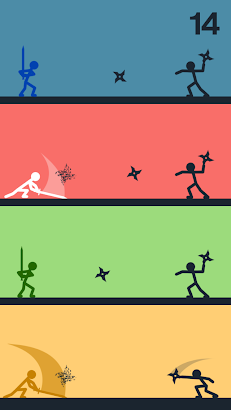 The third episode of the popular game Make Them Jump is now available! It’s called Make Them Fight.

Make all the dudes use their swords to destroy the shurikens flying across the screen.

You can play with all your fingers to control up to 5 dudes, or just ask for some help to your friends!

How long can you last out?

Mission Whitaker December 11, 2014
The game is a decent time saver for sure, but I think the game could benefit from a bit of a difficulty increase. Even on the hardest difficulty you can just spam sword and get well above 200 pretty consistently. You guys should raise the cool down period on swinging the sword. Or at least make an additional difficulty setting where maybe swings have two or three times the cool down for two or three times the points per hit.

Preston Lee November 24, 2014
You play it once and hate it. Same formula as all the other ketchup games. Slow to play, slow to retry, and ads popping up every time you attempt to hit the retry button. Literally all you do in this game is tap different areas at the correct time and it’s completely up to luck whether the game glitches or not. There’s no fighting at all.

Jose Martinez September 29, 2016
There’s 2 achievements: play 500 times and play 5000 times. I lost count a long time ago and I don’t see something that keeps track of how many times I played and its frustrating. There should be an achievement for like “played 1000 times” “played 1500 times” an achievement for every 500 times.. cuz let’s be honest, no one has the patience to play this 5000 especially without knowing how many times they’ve played

Jellavanq La’Kerrigan March 24, 2015
There’s not much to the game from what you see in he Screenshots. Timing of the swings is oddly off and rather annoying due to the unnecessary animation choices. You’ll certainly get more frustration than fun out of this one.

Denchik K October 18, 2014
So repetitive. You just hit same projectiles over and over again. Nothing creative. Unlocks are the same character but slightly different color. Not worth my time. Extra star for not spamming ads.

Dustin Mills November 27, 2014
If you’re super bored try it, but from a game development POV, it’s almost lazy. Good thing it’s free. Try harder, and do something new or creative at least.

Cxtp Cxtp April 17, 2015
Ketch app never felt compeled to actually create a new game they just changed how the game looked and said it’s a new game even though it’s just the same rules, controls and difficulty. Very boring they also have the same title so it’s like downloading the game twice it’ll make you look very stupid.

Johnny Cadena April 5, 2015
Every time an ad pops up it kicks me out of the game. The game itself was okay but I couldn’t enjoy it very long because there are ads just about every other game. Not worth the download at the moment

ishak carkci July 23, 2015
In the beginning idea was good but it freezes up and kills you I tried in ipad,iPhone, flagship android phones and all the same… I just hated

Harrison Beard September 8, 2015
Don’t get it, this seems just as good as most Ketchapp games, addictive, easy to learn, no problem with ads, cant believe this game only has 3 stars, it deserves more

FreezenTaken Gaming October 4, 2015
My tablet samsung is not usable from this game,i can only see the half of the game,and it sucks beacause,i cant see multiplayer and when your playing the instructions,i can see the guy that throwing the shurikens,and when you see the picture of this,there was a multiplayer it 녀차. But i rate 3 stars beacause i wondered the storyof this game!!! 릃어국허늟

Rosinfilledpecncil March 21, 2015
Doesnt give you a practice when you start. Only how to play. It needs a practice level so the player can get used to watching TWO star throwers at the SAME time.

RiSk Clan October 28, 2014
Its no surprise this game is amazing, theres a small downside which is the lack of creativity

Joanne Kontominas November 28, 2014
ALL YOU GUYS R SOOOOOOOO WRONG YOU ALWAYS SAY “TERRIBLE LAGS OR SMETHING” YOU GUYS R WRONG!!!!! It is so awesome

Nick OnGoogle December 19, 2014
Great game but wen u tap to attack the star you shield make it like a piano and play a song!! But add different songs

Michael Daaboul February 17, 2015
Compared to all the other games in the series, I have trouble figuring out why this one exists? It’s the same gameplay as the rest wrapped with a horizontal spin. With that said, this game is really boring.

Matt Mcgill March 8, 2015
This game leaves MUCH to be desired. First off, different weapons other than the sword for instance. The timing between each shuriken is almost exactly the same, and if it’s not they are spread out so far you can’t tell which is gonna hit what color first. Also having a game with two different tap zones especially with such a color differentiation, it’s very hard to tell when the shuriken will even land. Game needs a lot of work still. Use only one ninja, not two.

Alyia Wild January 16, 2015
Fairly good, not very imaginative but enjoyable I liked the different levels but maybe the characters could have different abilitys and maybe u could attack like red and defend, the name is misleading but still good

matrentening do May 25, 2015
So hard you just let A 10 year old do this what kind of game is this my highest is 23 make one screen,I did normal and I gave up

Caleb Montoya October 17, 2014
So fun you just try to set a goal to get the next person and doesent take alot of time ti download

Lily Gardner November 20, 2014
This game is super fun, but extremely difficult. I never have problems with lag or bugs!

SmileY November 24, 2014
Stupid concept. Not addictive at all. All you do is tapping the screen so those two retards can defend from the flying shurikens

FocusPunch January 19, 2015
I only downloadedthis game to get an exclusive bird in don’t touch the spikes. I’m not saying it is a bad game though.:-)

Mr. Lonely June 22, 2015
There should be another mode were you can only hit the shurikens with the back swing also personaly I think you should be able to give your stick figure hats and different swords please consider this in the next update

Egg Sheeran April 6, 2015
In 30+ it is so hard so fast throwing surikens got rage all the time one time I rage quit

José García November 3, 2014
Your games are amazing, i downloaded almostneverything of you but the stickmans should be more creative,wich i manage should be diferent in forms and guns, and the others may be more funny, like animations when they launch a gun, diferent shapes, and also diferents kinds of “maps” but is very good in the other things, pls try to do it, will be the best

Courtney Bowles August 5, 2015
This is my favorite game in the series. Why do people think this game is bad

Xenos Fur November 4, 2014
Just spam click all of em and u can get alot of score

Jonathan Hercules May 17, 2015
Its not awesome but great, its great becuz the only thing you do is attack ninja stars, witch is cool.

Jacob Gullett March 15, 2015
I dont know why so many people are saying so many bad things about this game, it’s a really fun simple game, but challenging, the graphics are simple but good

Kingston Terry November 28, 2014
Dud this game is great appreciate wat ya get because at least it’s free it’s not like it’s the worst game in the world right and after all it still takes away your space so just delete it I wouldn’t because it’s a prettygoodgame I have to say.☺???????

Shookoo October 28, 2014
The game has consistance however the idea of fighting is not shown,it is simply a missleading name which means a certain 1 star. The name is also missleading because you cannot phisically control the shrunken thrower.Therefore the app/game is useless and not advised to be installed.Thank you.

Eleanor Mcmanus November 2, 2014
This is amazing the hole lay out is just crazily awesome but the levels go harder and that’s OK I like that but be warned they can get hard do download you’ll be happy you did

Ryan Chase January 8, 2015
I have quickly became addicted to this game. Having to control multiple people made more fun than if you did it with only 1 person.

Rika Macatangay December 11, 2014
This game for me 99% suck 1st time iplay i shouted ugly game srry for this all ketchapp games are 99% ugly for me ill uninstall all ketchapp games boring -.- pls do a Fun game im addict saying ugly o_O -.–BoredMe

craig ferguson October 31, 2014
The game is surprizingly large for such a bad game just tap the screen tap the fing screen

Abi K October 31, 2014
Make them a bit more creative but your apps are brill everyone I’ve showed it to loves them and we have a laugh
Tags
Ketchapp