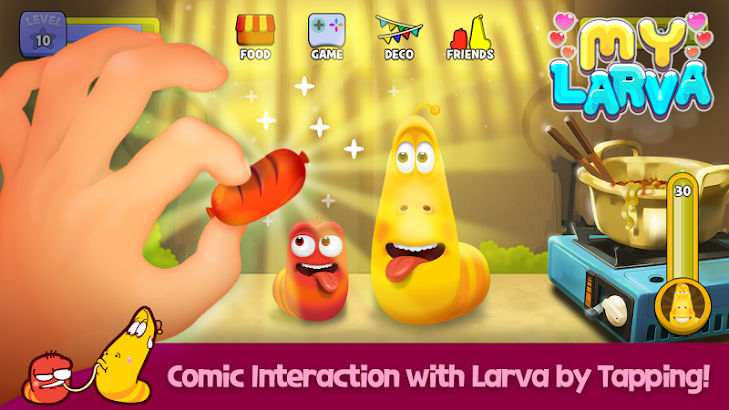 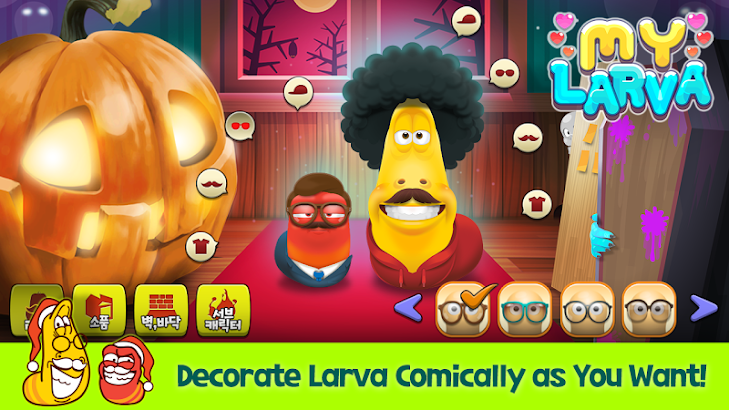 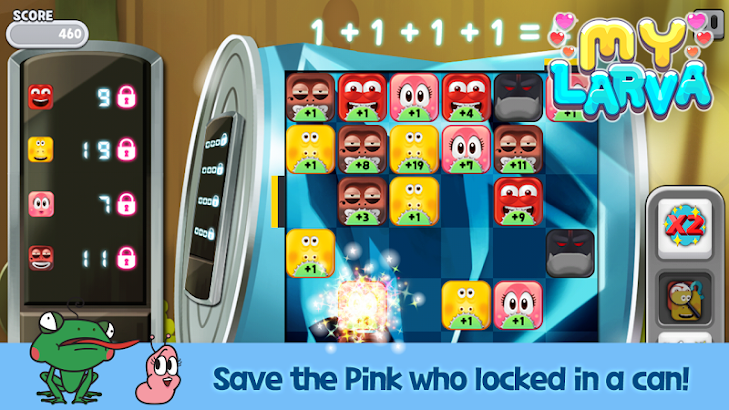 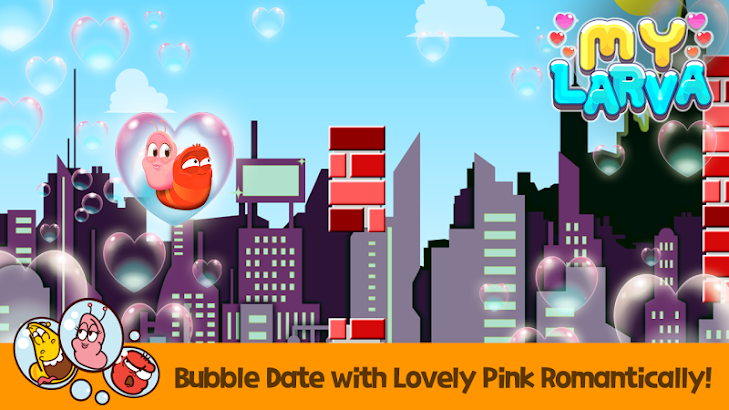 – The world best comic animation “Larva” exported in 100 countries all over the world has come
into smartphone game!
– Slapstick comic actions of world best comic duo Yellow & Red and pleasurable sound would make you feel
Larva as the most exciting game!!
– From highly addictive mini-games to various decorations to dress up stylish larva!
Special interaction with larva through just one simple touch!

Game Features
My Larva?
You can meet “Larva” which are animation characters through smartphone! (mobile phone)
◆ Mini Game
You can feel the ultimate fun via highly addictive mini-games!
① Clap Clap Clap
Match the same image card as fast as you can! Draw all the images on your mind!
② Whack Whack Whack
Come on Violet! You are dead now~ Whack the Violet as fast as you can!
③ Love Love
Bubble date with lovely pink romantically!! Avoid blocks and united with Pink making love point!
◆ Cute and lovely items!
Various food items from sausages to pudding which Larva love to eat!!
Splendid decoration items to dress up stylish Larva!!
◆ One Touch Interaction
You can interact with Yellow and Red through simple tapping!
◆ Splendid Events!
We are all packed with gorgeous event. Check this and get your gift!
< How to Play Larva excitingly >
* Energy gauge would be filled up when you feed Larva!
– You can play fantastic mini-games after filling up the energy gauge
* Play mini-games and Compete with Your Friends in Ranking System!
– You can feel so much fun when you play with your friends!
– Go into the mini-game rankings! You can receive bonus reward after the mini-game result!
* Splendid Decoration Items
– Each decoration items have their own function such as EXP up.
* Heart Friends
– Make friends via network system and give love & lay a fart to your friends!
– You can also get extra coins when you visit your friends’ Larva!
* Missions That Can’t Be Missing
– Gain your EXP, coin, rare items after completed daily missions and the long-term missions
* Interaction with Larva
– You can see a variety of comic facial expressions of Yellow and Red when you touch them in different ways

Crystal Medlock March 23, 2015
You need to make it so we can switch it to english please i love larvae and would probably really like thiss if i could read it i dont even know what my mission are or what im doing or suppose to be doing ,seriously cant understand any of it please please please please please please fix this so everyone can enjoy this lovely game

Dead. Forever. June 3, 2016
I may not be able to read it but, I figured it out very quickly! (The main things) I’ll rate it 5 stars if translated into English ^^

Marty And Evelyn October 5, 2015
I am not forgien. I can’t read the directions for this game!!!!!II am uninstalling. What a waste of my time. Fix this and I will install it. When you fix this problem I will be here.

Janelle Hilliard the Pony August 2, 2015
It doesn’t have to be unenglish,if that’s even a word…but English people watch the larva show too.

Jadeisha The Pony March 12, 2016
I love this game because making friends is fun so would three users please get in my friend book

Lillian Berry August 14, 2015
Could not understand. Was in a foreign language

Paul Carter January 14, 2017
It is so funny larva I could hardly laugh

Elong8d Poker fase March 6, 2016
Not in English me and my little brother don’t know how to play

Birb The birb June 5, 2015
Needs languages so that you can understand it

Rosa Angelica Sanchez January 29, 2016
It doesn’thave English so I’m going to erase it I hate it

justin the stickman March 13, 2015
IT IS RED AND YELLOW! And… I got the other larva game

uriel castillo August 8, 2016
I like it how it farts coins

Bridget Thomas March 7, 2016
I like it but English would be nice…

Natalie McDaniel September 6, 2016
Please translate to English so I can read what’s going on.

Lamarr Singletary April 25, 2016
I love it but no english

Tari Rupel September 13, 2017
Love that they kept it in the show’s original language, Korean. This makes me very happy.

Kira Bean August 6, 2017
I don’t like this app because there’s too much as and it’s not as English

Kj Elliott June 27, 2016
I like the show and game and i dont care if its english or not

Elizabeth Coffey Behan June 2, 2016
I love this game so much

Syria Haskins August 9, 2016
It is so attractive and easy to play