Fight demons while collecting treasures to upgrade your weapons!

Great for about 1-2 hours Around level 50 there’s not much to buy. I want to know what the secrets do but it is impossible to actually purchase them. Even if you have enough coins. The trinkets at the end of each round make you stronger, but you can’t actually see your stats. 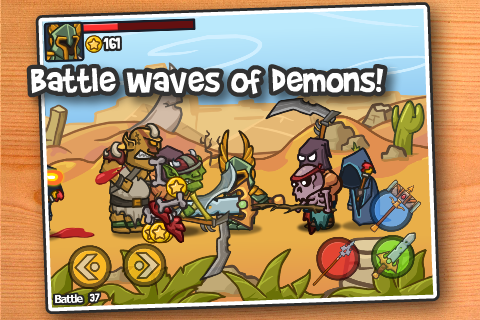 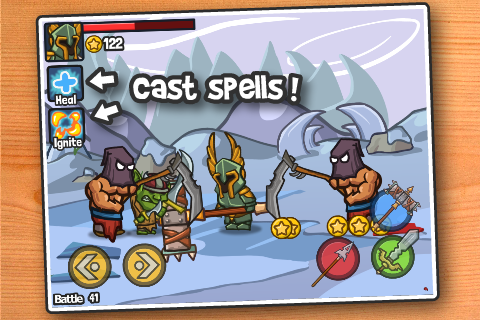 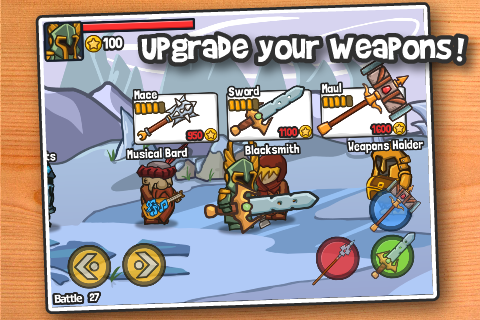 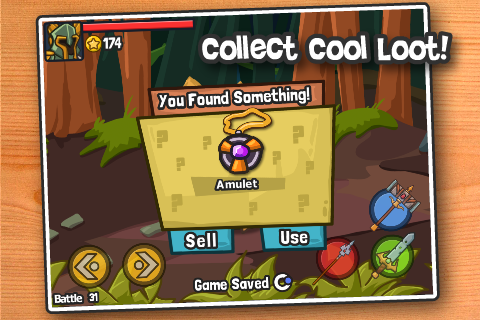 Paladin vs Demons is a side scrolling hack and slash game for iOS and Android devices. Fight your way through hordes of demons while collecting treasures and money to upgrade your arsenal. Weapons include a sword, mace, maul, javelins, and throwing daggers! Cast spells to heal, summon allies, and rain down fireballs!

– Fixed crash bug that occurred when starting the battle on day 19.

Steven James July 19, 2015
Around level 50 there’s not much to buy. I want to know what the secrets do but it is impossible to actually purchase them. Even if you have enough coins. The trinkets at the end of each round make you stronger, but you can’t actually see your stats.

Adakin Oskierko April 4, 2014
I am currently on battle 73 and I have all 5 of the weapons at there max level and the game is starting to bore me. It is a great game and is a ton of fun, but there really needs to be new weapons. Also a shop that would sell the spells, healing power and the summoning spells should be added to the game along with new monsters and new terrains. It truly is a fun and addicting game though.

Yaseen Sabra January 19, 2016
I’m assuming this game is the sequel to the awesome colosseum heros. This game is a step back honestly, it doesn’t have a pause button, an option to turn off the sound, laughably imbalanced gameplay with mele weapons being useless and whenever you switch scenes the direction keys get stuck.

Jay Cleere May 8, 2016
Why am I stuck on thewall on battle 7.I can one shot skeletons zombies mages with my lvl3 dagger and 2 shot kill mummy’s so easy

Antonio Wade February 26, 2015
Ads pop up in the middle of a wave and then when I exit it a button gets stuck and won’t let me control it so I have to wait for it to reload its horrible

Mason Morris July 28, 2015
Your attacks are monumentally slow, the sound effects come months after whatever they were supposed to go with, your hit radius is tiny, the throwing weapons outperform everything else in the game by miles and you have to play it four weeks to actually afford anything without just buying the gold.

Brian Hicks March 4, 2014
Levels are not very interesting. Just button mash and you win. There should be more levels on the weapons and maybe a weapon skill that you can unlock.

Thro K July 13, 2014
Hello my name is Craig nelson. Iwork for the droid game center of the usa. im looking for someone like you. My email is currently down if you would like to spark your games to the next level plzs contact me on kik. My username is craig_nelson629. Thank you and have a great day

Ivan Chou August 17, 2014
Awesome game, but the ads completely and utterly destroyed it, you get full screen pop ups in the middle of a combat. You can still play this game with WiFi off, still, what a rip off.

Jennifer Marek August 28, 2016
Add more weapons and. YOU NEED TO ADD WHERE U CAN GET ALLIES BADLY

Kade Martin January 20, 2015
I love it but need more begins I am level69 it is geting boring but I stil am trying to get to 100 it Neends more wepins bow across bow and gladiator sword. Flamingsword and more rar stuf like dimin gold and. Less trash and a guy that can upgrade armer and for hire levels ten for max for every thing and cost les I have everything max out your smart for macking this game:-)

Andrei David January 15, 2016
Needs a pause button in battle and to turn off the sound too. Add that and I will rate it 5stars but for now only 4

sergio Valdez April 17, 2014
everytime i get gold as a reward it never gives it to me and then i finish a biome the left button get stucks so i have to force stop the game fix and i give 5 stars

Fantomenk April 12, 2014
They don’t die double shoot slide God kill is the only way to kill I don’t have the stuff

Will Smith December 10, 2016
It was pretty good,but way too much blood and nauseous sounds.Normally I’m not creeper out by blood but this game makes me sick

Crimson Scythe October 8, 2016
First play, it’s pretty fun, though your attack is way too slow, but it will improve as you get some upgrade (which randomly get each battle), but the problem will come later when there’s no more new enemy coming, all weapons is on max upgrade, and the unlockable “secrets” which cost 2000 and 6000 gold turned
out to not working at all. This game need update. Lots of it.

Susu Alzarkli February 18, 2014
Not too hard not too easy things might be a little too expensive and i wanna buy weapons but this probably the best rpg ive played on my phone

Eric Duncan November 17, 2014
I get stuck alot and when I let myself die the jester brought me back and left me im the corner

austin fogleman November 29, 2016
I really like the game but like others are saying it needs more monsters and weapons also if you get gold at the end of a round from the loot bag you don’t get any gold

Gabe Schoonmaker April 22, 2016
I can’t get any secrets though but other than that its great.

Thomas Gaughan March 24, 2014
Have been waiting for ages and it still hasent installed

Nestor Tirado October 8, 2014
Palladian vs demons is a amazing game I found no bugs no crashes and it just an epic game

Sonia Medina April 5, 2014
Its a Adddictive game, But there’s no objectives and stuff like that and after you upgrade the weapons to the max there’s nothing to do

George Voulgarakis August 9, 2014
I earn coins from the bags at the end of the lvl but don’t get them

Nate Pace October 17, 2014
I am now on battle 33 and I really enjoy this. It’s so addicting and I really see nothing wrong with it! Awesome game!

mercedes garrison November 24, 2015
Every time I try to use the app it will come on but won’t load the actually game.

Kameron Jett July 12, 2014
It is a really fun game until you run out of new weapons

Kaeden Beebee November 12, 2016
Keep it up Guys! Maybe you could add paladin skins. Or magic.

Andy Fisher April 30, 2016
Can you add more armors and accessories you can equip? That would make it better.