Platform game heroes through the ages have been abducted! Which one is the best?

This game is great fun, from what I’ve played, but unfortunately I am unable to play much, as I find the swipe controls to be quite lackluster. I constantly find myself accidentally swapping direction when I jump, making the game way more frustrating and unfun when I keep dying due to the controls. If there was an option to just have three buttons on the screen as controls, or tapping on different sections of the screen, I’d find the game much more playable. 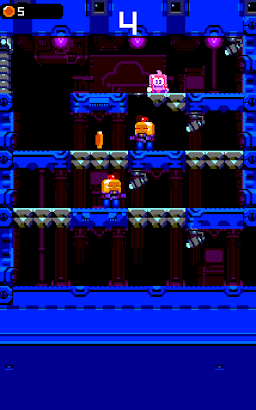 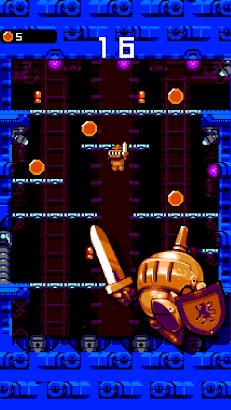 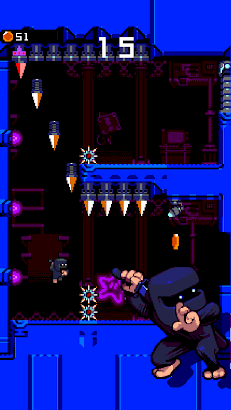 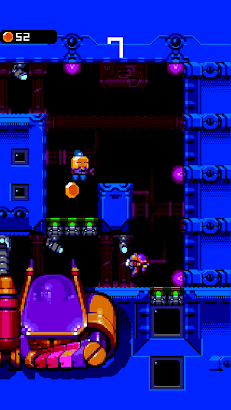 Platform game heroes through the ages have been abducted!
Pit them against each other in order to settle, once and for all, which one is the best!

• Can you unlock them all and become king of the leaderboard?
• Endlessly addictive, procedurally generated retro platformer!
• Swipe left, right & up is all you need to move around
• Pumping chiptune music by Eirik Suhrke, composer for Ridiculous Fishing and Super Crate Box.
• Cutting edge retro pixel graphics!

Important Message for Parents
This game may include:
– Direct links to social networking websites that are intended for an audience over the age of 13.
– Direct links to the internet that can take players away from the game with the potential to browse any web page.
– In-app purchases.
– Advertising of Nitrome products.

UnknownAugust 5, 2017
This game is great fun, from what I’ve played, but unfortunately I am unable to play much, as I find the swipe controls to be quite lackluster. I constantly find myself accidentally swapping direction when I jump, making the game way more frustrating and unfun when I keep dying due to the controls. If there was an option to just have three buttons on the screen as controls, or tapping on different sections of the screen, I’d find the game much more playable.

katrin todd July 8, 2016
It’s a really nice game. Good concept, aesthetic visuals, runs pretty smooth, but as I was entering a room, I watched it load down the screen but my character slipped through the level before it finished loading and now he’s just kinda bouncing around, going off screen and coming back on. Another thing however, is that the amount of rooms I’ve been to keeps going up. Please fix it, I think high scores should be fair and not cheated to get ? but anyway, great game, worth downloading ?

Tannele Kozak May 13, 2015
This game is fun! It has enough difficulty to be fun, but it’s not so hard that it’s annoying. The characters are fun, though I’m partial to the ones that are plays on Nintendo characters. UPDATE: The new art is okay but the walls and stuff should be brown in those rooms and some of the new rooms are sketchy.. Make the walls brown in the green background rooms for 5 (even that tiny a tweak will make the new rooms more enjoyable).

DuckAlert Beats May 15, 2015
Please make restarts one tap away, not two. Sounds like a small thing but considering a restart is so frequent it’s annoying having to reach high up the screen to click the red x button, then start again. Also, I paid to remove ads yet still have to click past one for your other games at the start..otherwise great, well put together and pretty addictive. A touch of megaman, almost a warioware kind of structure, yeah..nice game

Ant Hermit September 24, 2015
Saying Platformers are not my forte is an understatement, I mean I die against the first goomba in Mario bros more often than I’d like to admit… This game is hard,frustrating, unforgiving, and maybe I’m a masochistic gamer cause I love this game and can’t think of one bad thing to say about it. Good job devs or Dev I dunno. Its great! Download it!

Rapid Rook July 20, 2015
I love the game and the new updates. But whenever I click on the Watch an ad for a free revive it takes away a ton of money from me which gets me super frustrated when I’m trying to save up for a character. Also I found this epic bug on one of the new updated levels when you jump into a pipe the screen goes black and you only see your character and you start earning points. Also the game gets boring once you get all the characters and their upgrades. PLEASE UPDATE THE GAME!! Otherwise the game is very fun!

SuperCoolGuy IsSuperCool July 26, 2015
The game is really fun, but sometimes these ads appear which restart the game and takes me back to the screen with the Nitrome logo being built. This happens every time an advertisement appears full screen.

Adam Sco June 2, 2015
Why am I losing coins to retry a level when I choose the “watch the ad” choice. Shouldn’t be losing anything, that’s what the game suggests. You give no incentive to watch the ads.Otherwise a fun game but this is BS

David DeCorso May 13, 2015
It’s a really fun game, but please add more content. Playing the same levels over and over again gets a little repetitive.EDIT: Thanks for some new content!!

Anon August 5, 2015
If you’re like me, don’t have enough time to play more than 5 min a session, don’t hate dying allot and hate repetitive game play (this game is not repetitive, even if the levels are the same, it never *feels* like it is) then this game is for you! (tip: get the hedgehog and then upgrade him; tip2: disable Wi-Fi while playing)

Michael Daaboul August 29, 2016
Platform Panic is not entirely original, but that’s okay. Similar to Relic Rush and Super Meat Boy but more fleshed out, Platform Panic adds a variety of gameplay elements that work well but doesn’t grab your attention. The level design is fun, but gets tired.

Dylan Rivera July 3, 2015
It’s
fun but weird because of all of the security cameras all over the place, and how they follow the character, and is it some kind if test for the characters? Some cruel game of survival to escape that giant compound?

I Believe In Unicorns January 9, 2016
I have played this game so many times its soooooooooo adictive but I have all characters and all the upgrades so I need more things to buy to keep me playing! Plz

Maanya Mahesh November 14, 2016
You should make worm food your version would kill the other knock offs in the app store

Peter Senior December 21, 2016
A way you could improve this game, though, is to have items or something to use gold on after purchasing all of the characters and their upgrades. Also, I discovered a glitch. I was playing as Sir Jumpsalot (not sure if this matters) and was on the stage with the 3 horizontally moving platforms. I jumped towards a wall off of the second platform as the third platform was moving towards the wall. I got stuck in the side of the platform and couldn’t escape. This ruined my run. Fix it please. I just now discovered an infinite cleared rooms glitch with the space one. I fell through the wall and my screen is all black. I’m at 400 rooms and counting… Can you fix this?

Seth Roby May 1, 2017
A fairly average endless runner type game that is needlessly difficult. It’s like if you took Nitrome’s Leap Day, except took out the pleasing visuals and good music, and replaced it with 3x as much frustration

Stephen LaFleur January 13, 2017
I love everything rooms, enemies, spikes my one complaint is coin scarcity it make it seem forced to make really outrageous in app purchases

Zachary LB3 February 10, 2016
I really love games that seem like a product of video game producers just thinking of joke concepts like awesome ninja is awesome for example it’s just so silly and funny … I like it…. And I’m trying to get Mr. Smooth before my friend but it’s almost impossible!

Elise Taylor November 16, 2015
I would rate it 5 if it didn’t ranfomly turn me around while in the air. That needs to be fixed.

Andrew Truelsen May 13, 2015
This game is SO addicting and fun and just seeing their versions of characters such as Sonic, Mario, and Samus just causes a laugh every now and then. For me they hit home for me with this app.

Elias Children June 6, 2015
I love the udate and especially the new Watch Ad for life button, but it also takes away money.

Z. Orton May 20, 2015
But there is a glitch in the tubes, if you jump up in a tube that you are supposed to come out of it puts you in a black room that keeps adding one to your score. Please fix!

Jacob Kaye July 2, 2015
I love the game, but it doesnt feel right to have the blue rodent A.K.A sanic to get magnetism. He should get a speed boost or something like that. Im not hating, but it would be nice to see this implemented.

Chaz Boynton January 26, 2016
This is truly one of the best games in the play store it’s a fast paced action platformer the levels aren’t easy but they aren’t too hard and they are constantly different it’s a very addictive game well done Nitrome

Beka Lamazoshvili October 29, 2016
Would it be possible to get coins if you kill/jump on an enemy?

Ariel d January 25, 2016
It’d be great if it didn’t randomly reset the game after some random death, and if the ad button(for an extra life) didn’t make it crash. Otherwise fun.

Joshua Self May 24, 2016
Great game but as a suggestion I think it would be nice if you added daily goals or something so you can earn coins for so many rooms or staying a room so long just stuff like that but otherwise great. I LOVE YOU NITROME

AJBM June 19, 2015
I went into a void of darkness in one level when I triend to jump up a pipe then I earned points for no reason but it did not show at the end

Matthew Bell December 21, 2015
The update, which gives unique abilities to each character, only makes it even more addicting.

M.Angel Goni Avila June 5, 2015
Some achievements are glitched and are unobtainable. Please fix

Ariel Christian July 15, 2015
One of the few games which makes platforming in smartphones fun. A perfect retro platformer. Add some new features please like some kind of boss battle or equipments. Great game!

Lilly Hughes October 19, 2016
Not very responsive-takes a sec for it to go L, R or up. Sometimes when pushing up it does a curve thing.

Ralu Ofoche May 14, 2015
Very addicting, i also like the new version.Its also funny for the people who did not unlock all the characters before the update because its harder to. Hours of grinding really pays off.

Spencer Schmidt July 27, 2017
I love the graphic and especially the music! A pleasure to the ears!! I also enjoy the knock-off characters, but the game is too barebones. There’s not enough to keep me going.

Daniel Kluttz June 10, 2015
Simple yet very addicting game. It took me no time to get hooked, and I have enjoyed the game thoroughly. Nitrome did an amazing job!

Ralph Kramden July 15, 2016
Hard yet addicting when it startsyou never know what lv you going in to so you can’t memorize what moves to make great game nitrome keep it up!!