Interesting version, few tweaks for five stars This is definitely a cool spin on bullet hell, and thematically makes more sense for Youmu to return bullets rather than shoot them. One gripe I have is that you get three HP with no grace period between hits which can result in an instant KO. 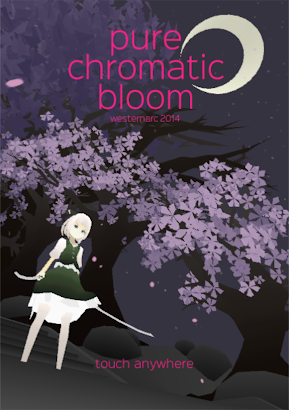 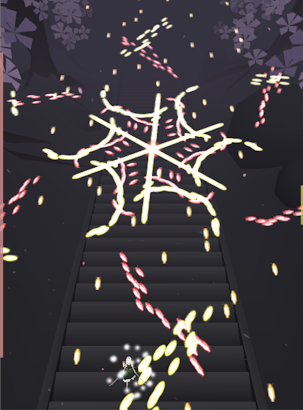 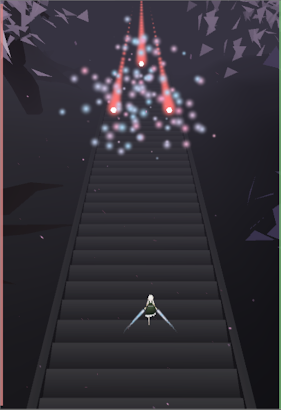 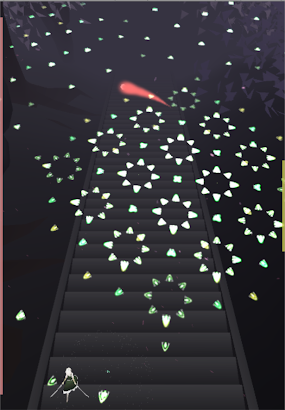 Several spirits have started causing trouble in the Netherworld

Reflecting their bullets back at them is the key

John Puhr January 19, 2015
This is definitely a cool spin on bullet hell, and thematically makes more sense for Youmu to return bullets rather than shoot them. One gripe I have is that you get three HP with no grace period between hits which can result in an instant KO.

Mako January 9, 2016
The game looks legit but after the character dialogue pops up in sequence mode when you play for first time a pop up ad shows up and force closes the game. The game would be more fun if the ad doesn’t randomly forces the app to shut down every time you start the game. Anyone else experiencing this issue? Running LG Stylus with Loli pop and every other app I own works fine. Is the game not Lolipop based? Thanks if anyone fixes it. Id rate it 5 stars if I could actually play it. ?

Xierra Marron June 26, 2015
Pure Chromatic Bloom is a great game, made in Unity Engine, and is obviously a fanmade Touhou game you expect it to be. You play as Youmu facing spirits who have girls’ spell cards (stage 1 is Reimu, stage 2 is Marisa, etc). Youmu can’t shoot, but can reflect projectiles, potentially return to sender and take damage. Youmu has only one life but can take up to mostly 2 hits in quick succession. But there is one major problem imo: the inability to pause / restart / exit ingame. Overall recommended game.

Annie Dela Cruz December 23, 2016
The gameplay is fun, even if Youmu doesn’t shoot bullets. You use Youmu’s sword to deflect the bullets toward the enemy instead, which involves dodging the bullets at the same time. I love the gameplay, and I love that your character’s Youmu! Just a suggestion though: could you update the app description to indicate that THERE ARE ACTUALLY ADS in this game? It’s kinda dishonest not to specify it, and this made me take out one star from my review ?

Paulo Ricardo February 13, 2015
The game is really good looking and Youmu looks awesome, but the controls sometimes feels stiff even changing the sensibility, and I have FPS loss sometimes, making it hard to play. If the gameplay was improved, some more lives were added, a hitbox was shown and an exit button was added, it would be 5 stars for sure. It’s cool, but it could be awesome.

UnknownOctober 25, 2016
Crashes with no force close message a few seconds into gameplay on my Nexus 6P running Android 7.0. EDIT: Fixed it, but requires root and freezing the ad activity, since its broken and causing the crashes. Makes an error banner at the top of the screen, but at least the game works now.

Dorian Bregonzo April 11, 2015
Game is okay but the controls even when the i change the sensitivity they just don’t feel right, the character keep escaping my finger, when that gets fixed that’s when I download it again!

Fathi Chan March 8, 2017
Love the everything that it has. Except for the reflecting bullets. How do you control to deflect the bullet rather than rotate-pinch? It’s quite difficult. Please enable a button for easy attack. Show our health points and the time taken need to wait for next attack. Please.

bicky bong January 19, 2015
The graphics are amazing for 1. But as others have stayed the movement is rather inaccurate. Also, it would be good if a tutorial was made as I was rather confused as to how the game works. Finally, please make the app pic darker, can only see abit of it.

DMNTR6_0 June 8, 2015
Rarely lags on my s3, not sure what these people are talking about. Currently stuck on 3-2. Needs higher sensitivity, I’m now used to the 3d aspect, but it is still not sensitive enough. Needs visible hitbox. To those saying it needs an alternative attack, the boss health auto depletes with time, so you can consider that an invisible seeking bullet spray. Additional bullets would make the game too easy.

Thomas Harper December 8, 2015
Here’s an idea.You should make a full on 3-D game about destroying spirits or putting the evil out of them Touhou style. Start with Youmu for a story thats in a full 3-D world (the type you can look up and down in) keeping the bullet hell. Then after story you can have option to play a different character or make your own and explore the Touhou world and you get to fight some of the Touhou. I’m not sure if I explained it well but wouldn’t that be a great game?

Andrea Chen May 17, 2015
I haven’t played this kind of game before and there are zero instructions. I can move her around but that seems to be it. Also, level select is unreadable due to being nearly transparent.

Velox Axo December 9, 2014
Played the game for a few minutes, here’s my first impressions: movement is terrible, how far you move appears to be tied to the framerate, and its very inaccurate. Character jitters a lot, and its difficult to ‘feel’ where you will be. May be tied to the unique 3d camera angle that’s not normally seen in danmaku games. Check out danmaku unlimited 2 for a perfect example of how a danmaku game should control on a touch screen device. There’s also some major performance issues. No visible hitbox.

Daniel Sentrik July 21, 2016
The game crashes every time as soon as the ad comes in on any level. Can you fix this? The game used to work fine. I’m on a Galaxy s6.

jackylolz January 13, 2015
Ads is very annoying, could you move to another place, like score?2-4 Spark still hit me even i am staying behind the spark.is it suppose to be like this?

Tokitae August 27, 2016
I started it and not even 3 seconds in it crashes every time

Samy Lahfa September 18, 2016
It looks really well made but the ad at first crashed the game so I went offline but still the same problem crashing on every start of stages I haven’t even tried the game yet please fix it.

Matthew McHone September 14, 2015
This title looks beautiful and I really want a chance to check it out but it unfortunately crashes as soon as I get passed the title screen.

chuck malanchuk September 13, 2016
Game looks amazing. BUT….. As soon as I start the first level, the game shuts down.Would love to try the game.

Human Person October 10, 2016
The game looks really good, but I cannot play it. After hitting Main Sequence and after the first dialog box, it just closes. I am using an LG G4 on Android 6.0

Silver Fox August 28, 2016
I would rate this higher if the game didn’t crash when the ad shows up. I was lookong forward to playing this game too and I hope to do so in the future.

Forever Myself January 5, 2016
Also,it kind of strains my eyes with all of the colors…there should really be a warning,if there is one,wish i would have read it

Saxygoos February 5, 2015
The controls seem tight though sensitivity should go a bit higher. The ascetics are beautiful from the character sprites to the actual models and terrain. Though gameplay wise it doesn’t make sense. I’ve played the Touhou series, and none of them have ever done anything like bouncing back bullets as the only form of attack. Lastly the games graphics area little too demanding for my phone (and as what it seems almost everyone else’s), so highly intense moments get cut short from frame rate loss.

Shari Røøze February 16, 2015
It’s ok, i only miss the touhou part in this game. The characters are there but it’s just avoiding the enemy? No shooting.

Karlo Batto February 28, 2016
It has very good visuals, but it crashes when Youmu’s first dialog appears

Raekwon Miller September 19, 2015
Can’t enjoy the game because it always stops on it’s own

Memo Cortez February 13, 2015
Everything looks great music is catchy but the controls are weird, can’t seem to make a sudden move without having char move all the way across the screen.

let life end April 17, 2017
Umm I every time i go to a stage it close and take me back to the app store, but it could’ve been a good Android version forPerfect Cherry Blossom!

Toilet Tree Randomness April 5, 2017
Cant play. Says game stopped for no reason. Stops before i even play. One word. STOPPED!

nedla 2 April 21, 2017
Every time I startthe game and get in to playing it. Crashes and force quits the game