It would be great if it didn’t remember snapshots only for the last game played. How come that it doesn’t save snapshots for every game separately? I’m in jetpac and it loads snapshot for Renegade that i played before that, although I saved JetPac snapshot several times in previous session. 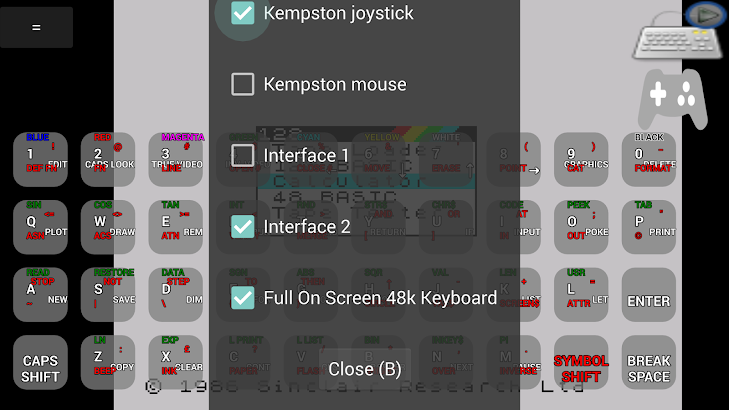 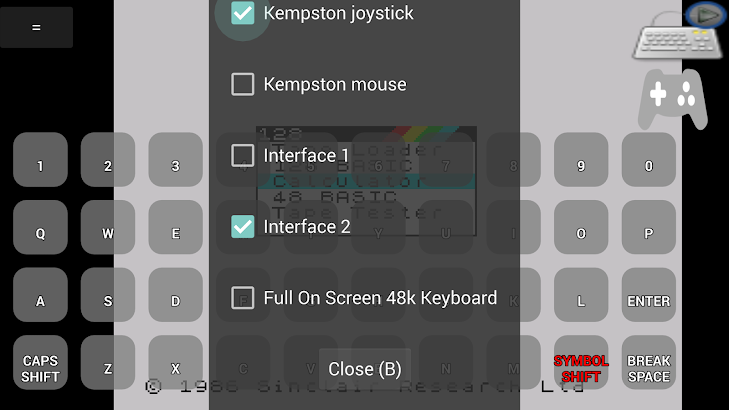 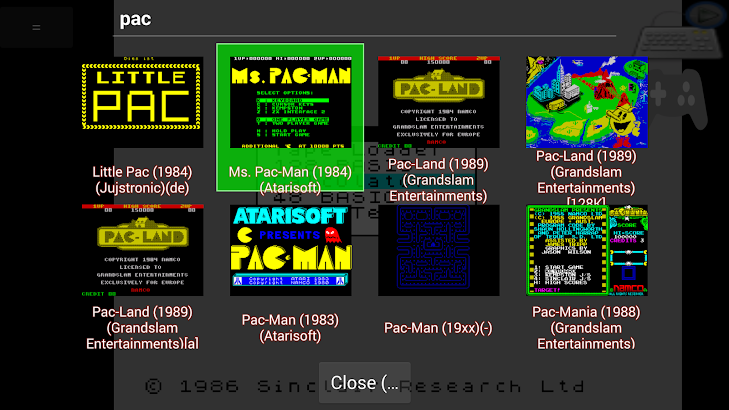 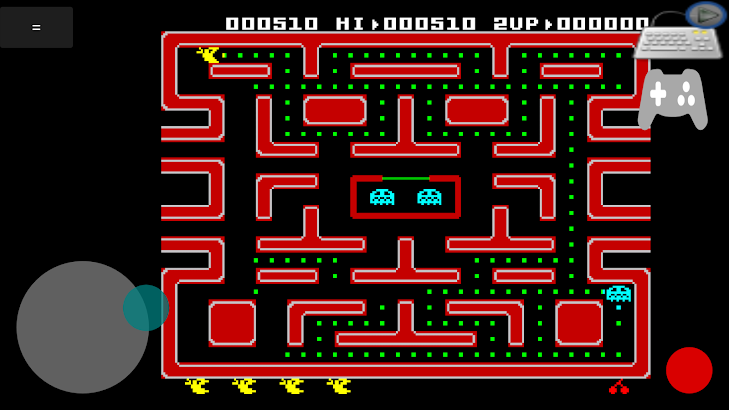 – Loads all ZX Spectrum files
– Accurate 16K, 48K, 128K, +2, +2A and +3 emulation
– Quick load & save snapshots. It is quite useful when you play games
– Easily select the Joystick type
– Poke finder, disassambler & inline assambler. Allows the user to crack the games and gain infinite lives quickly
– Last but not least, FUSE is very high-efficient, it needs only ~15% of CPU on a Nexus 10 to emulate your games

In addition to FUSE’s features, Spectacol adds:
– Online search allows the user to access thousands of ZX Spectrum apps & games! The search results are downloaded locally and they can be used to start the games offline
– The UI is design with gamepad controls in mind. The user will be able to play all the games that support Joysticks using the gamepad.
– On screen numeric cursor (available only when a gamepad is present), allows the user to quickly start & control the games
– On Screen full/simplified 48K Keyboard needed when the numeric cursor is not enough
– On screen virtual Joystick (available only when no gamepad is present), allows the user to play the games

Be aware that, Spectacol is in BETA stage!
Please fell free to report bugs or ask for new features to https://github.com/bog-dan-ro/spectacol/issues or by using Menu->Help->Features and bugs

This is an ad free application, please don’t contact me to add any ads because I’m not going to do it!

Tom Pax October 16, 2017
It would be great if it didn’t remember snapshots only for the last game played. How come that it doesn’t save snapshots for every game separately? I’m in jetpac and it loads snapshot for Renegade that i played before that, although I saved JetPac snapshot several times in previous session.

GtB Films October 17, 2017
Works well with Recreated Zx Spectrum keyboard. Except on my Hudl2 for some reason. Excellentapp though.

Jerry Nuckolls February 2, 2017
Great emulator. Very user friendly. Intuitive and not very fiddly. I have used emulators for a variety of systems and consoles, and this is one of the easiest to set up and use that I have seen. To be honest, I had never heard of the ZX Spectrum. But I downloaded this emulator because I wanted to play The Paranoia Complex. It was not one of the many games included here, so I downloaded it and it runs perfectly. The simple elegance of this emulator now has me wanting to check out the rest of the extensive catalog. This app would be a bargain if it were paid. The fact that it is free makes it a no-brainer. Highest possible recommendation.

Developer BogDan Vatra February 6, 2017 Thanks a lot for your kind words.

David Norwood January 7, 2017
Great emulator and supports ZX Spectrum recreated keyboard (unlike some other emulators). No ads or dodgy permissions makes it a must have retro computer app. Only issue I have is both my devices report ‘Your device does not support low latency audio”

Developer BogDan Vatra January 30, 2017 Thanks for your kind words!
You can get rid of that info by setting a higher “Message level” in the settings (Options->General Options->Message level->Warning & Errors).

Andy Barsby January 23, 2017
Online search did nothing, with and without a VPN. Nothing happened with just a single letter search too.Also, on Huawei P9+ with Android 7.0, it completely prevents the software buttons from appearing, so you are totally locked inside the app until you quit.

Developer BogDan Vatra January 23, 2017 The online search works just fine for me. Make sure you type something in the search bar (e.g. pac).Regarding the second problem, if the sliding from very margins of the screen doesn’t work, then most probably it’s a bug in the Huawei’s implementation. On Nexus 5x works with no problems.

Ash Wynn April 16, 2017
I installed on a Samsung J2 BUT nothing works! I type on the emulated keyboard but nothing appears on the screen. What am I missing? Why are you all saying this is so great? Can someone PLEASE direct me to a PC emulator that actually works. It seems 99% of apps on the Play Store don’t work!

UnknownAugust 2, 2017
I like almost everything about this emulator except that I cannot make snapshoths and save tape files. Also, typing = is difficult because the keys are exactly above one another. Hope to see an improved version soon.

Alan Cuthbertson January 30, 2017
Great gameplay, easy to use, built in online search too. I’ve used most of the spectrum emulators and this one for being at beta stage, looks like it could beat the rest hands down in the future. Fantastic memories.

Developer BogDan Vatra January 30, 2017 Thanks for your kind words!

Christopher O’Sullivan December 27, 2016
I purchased Spectatulator thinking it was the best all round Spectrum emulator, but Spectacol is just as good if not better.The online search for software is highly user friendly

Developer BogDan Vatra January 5, 2017 Thanks for your kind words!

Matt Kasdorf December 11, 2016
Honest use of permissions, so rare these days; thank you.Might you support printing out to a PDF format?Would you please do a ZX80/ZX81 emulator in a similar fashion.

Developer BogDan Vatra July 25, 2016 Thanks.
Please use https://github.com/bog-dan-ro/spectacol/issues for features requests & bugs.Regarding ZX80/ZX81 emulator I’m afraid that my free time is too limited for it ?

Adam James March 19, 2017
Using this emulator with a gamepad is a great experience. As the author says, quick access to saving state is important. At last I think I am going to finish Manic Miner, saving state every time I get past a level without dying, with no need to touch the screen. This emu really inspires you to play games and have fun, with others I found myself quickly losing interest for some reason.

UnknownFebruary 7, 2017
Occasionally it forgets the keys or the keys become sticky and you have to press a few keys to get it back to normal. Using Android TV box with it and a Sumvision wireless keyboard.

Developer BogDan Vatra February 11, 2017 Well, I’m afraid there is nothing I can do …
May I suggest you to use a recreated zx spectrum keyboard instead?
If you have any idea how to improve this situation please feel free to add it to https://github.com/bog-dan-ro/spectacol/issues

ashley June 5, 2017
I used Marvin for a long time,and its still a great emulator,but having used this for a while on both a tablet and on android TV,this is my new favourite zx spectrum emulator.there are plenty of features,and its easy to set up.its great you can download any spectrum game,your not limited to the wos site,I can finally play jetpac,and other classics.ignore any negative comments,the developer has done a first class job,and its free.what is there not to like?

Sam Singer D July 5, 2017
Brother Bog Dan, just like your nicely made game, this app. working smoothly and without any glitches!?? This emulator works better than most other options available on the Play store. And also NO INTRUSIVE/SUSPICIOUS APP-PERMISSIONS like most other apps.! Keep up the good work bro Bog Dan???☺

Aron Alliston December 11, 2016
Would love to see an option to adjust the virtual gamepad transparency.

stephen keenan April 2, 2017
I have reduced the rating as the controls still won’t work and she probably put it on joystick and bad communication when you leave feedback when there is a problem only when there is good feed back no help available shame as it looks good but all i can do is find a game than get killed as no controls . Please fix it and i will up my feed back

Nuno Pinto May 12, 2017
The most perfect Speccy emulator for Android. No ads, great interface and it works perfectly. Congratulations!

Craig Stewart-Thomson March 4, 2017
Really good spectrum emulator. Would be good if I could use my physical keyboard as Spectrum keyboard, as I’m running on a Chromebook.

Dave Goodwin April 23, 2017
This has to be the best spectrum emulator out, good layout and in app game downloads

UnknownJuly 8, 2017
You can save your programs in tape.

Developer BogDan Vatra December 17, 2016 You need to type something in the search bar e.g. pacman

Developer BogDan Vatra July 2, 2017 I’m sorry but I’m afraid I don’t understand what you mean. Can you please elaborate with more details your problem?

Tim Prowse August 7, 2016
Doesn’t load any downloaded content or online games and seems to have a thing for 007 games there’s about 100 just for the same 007 game. Atleast Marvin & USP have all the games working perfectly and u can write your own games too on them which I’ve already written new versions called Football Champions 2017, Treble Champions 2017, Football Director 3 which goes all the way down to the Southern Premier/Northern Premier and the Evo-Stick (Ryman Premier) too also with the Champions league & Europa league,etc.

Developer BogDan Vatra August 11, 2016 I’m sorry to hear you had problems …
What downloaded games you’ve tried and they didn’t worked?
The online games work perfectly for me (and for the other people) it might not work if the SSL handshake fails …
It will be great if you can add all your problems to https://github.com/bog-dan-ro/spectacol/issues and will check them one by one.

David graham August 21, 2016
Best spectrum emulator of all on android. Searching local files can be confusing, I guess this is where some people get stuck. Best way to search online is enter first word of title or enter the publisher name i.e. Ocean, Mastertronic etc…

Developer BogDan Vatra October 11, 2016 Spectacol should work with most (all?) ZX files formats out there, can you give me more info on this matter (e.g. a link to that file)?If will be great if you can use the bugtracker https://github.com/bog-dan-ro/spectacol/issues to post the issues, because I can track them easily.

Steve Gibson September 3, 2016
Once you get used to it, it’s great. Trouble is, I still can’t get past level one on Manic Miner..!

Paul Sammons August 8, 2016
Brilliant! A 128K keyboard option would be good though. But still better than the other emus out there.

Developer BogDan Vatra August 11, 2016 Thanks for your kind words!
You can switch to 128K keyboard from Options->Peripherals and uncheck “Full on screen 48K Keyboard”

Payam Varposhti August 16, 2016
The best spectrum emulator on android. The emulating compatibility is near to perfection.

Darren Murdoch October 11, 2016
Love it.Worked great and brought back so many memories of hours spent playing the speccy games on me trusty ZX 48k

Gregory Dobbs August 31, 2016
This a fantastic app. All the old spectrum games are easily accessed and the controls are good. Probably will become my most used app.

Developer BogDan Vatra August 31, 2016 Thanks for your kind words

Andrew Pointon November 25, 2016
Can you please add support for zipped/compressed files. Thank you!

Developer BogDan Vatra November 25, 2016 It’s already added in the beta version.
Click on “Become beta tester” and you can enjoy it ?

Terry C July 18, 2016
Great update. It would be nice if the Dpad could have also been customized for games that were keyboard only, like Ant Attack and itwould be great if you could save individual configs for each game.

Developer BogDan Vatra July 18, 2016 Thanks!Please add your requests to https://github.com/bog-dan-ro/spectacol/issuesand I’ll see what I can do about it.

Darren Noyce July 23, 2016
Can’t play games that require keyboard as on my phone the keyboard covers the whole screen.If I’m missing something please let me know

Developer BogDan Vatra July 25, 2016 There are a few options:
– try to use cursor joystick (if the game allows it)
– enable portrait mode, the keyboard will be placed under the screen (though it will be very small)
– buy en external (blue-tooth) keyboard.
Tags
BogDan Vatra