Stupid zombies are back and you are humanitys last hope to keep them brainless.

Way too many ads. Are you kidding me with these ads? I have never had to sit through so many ads in any game I have ever played. I would gladly pay for this game because I love playing it, but my frustration with the ads makes me want to uninstall it. Hello, the ads are annoying, no one watches them. I like I am sure anyone in the middle of a game who gets forced to watch something they have no interest in would not be the least bit interested in downloading it on principle alone. Your sponsors should be made aware of this. Just give an option to pay for the game and end these annoying ads, please. 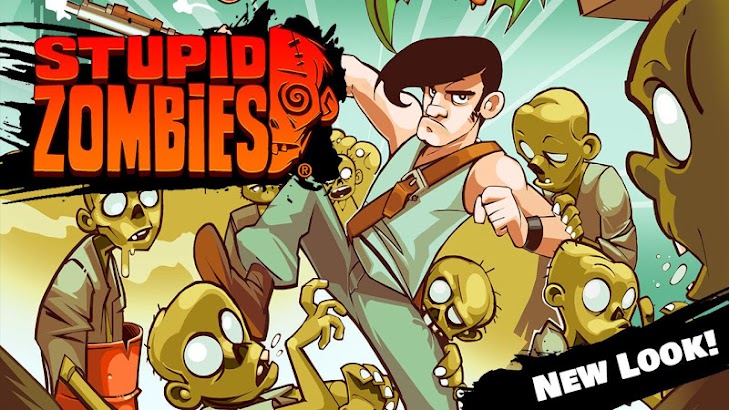 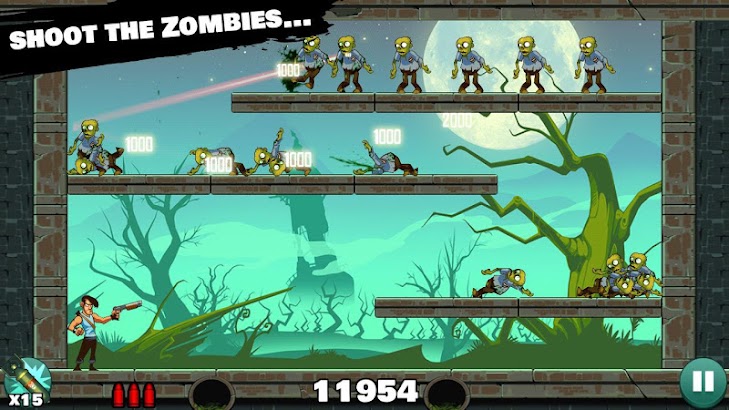 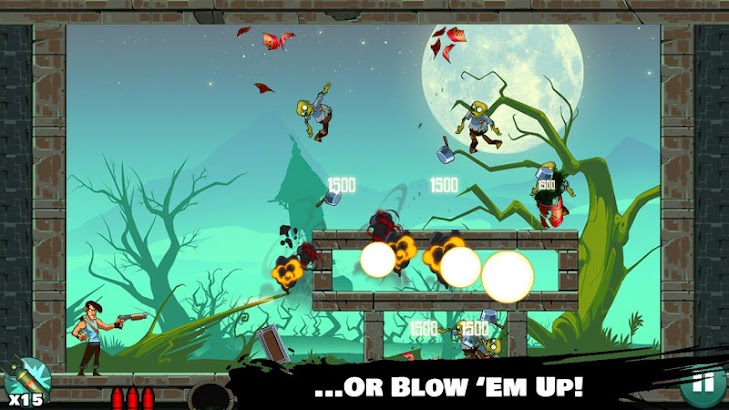 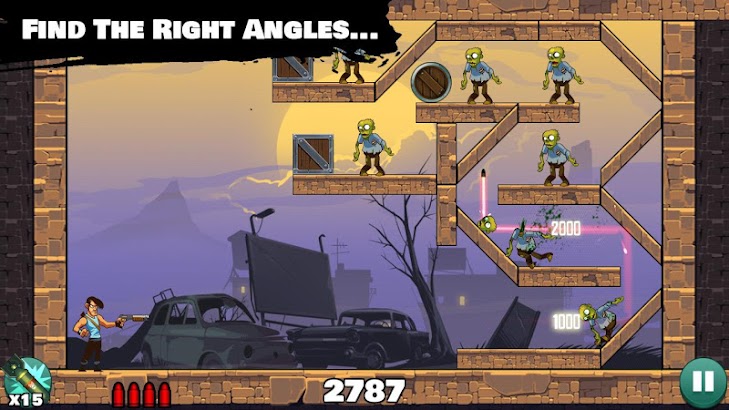 Those stupid zombies are back, and you are humanity’s last hope to keep them brainless. But beware, ammo is limited so you will have to get crafty and use the straight bullets, grenades, split- and buckshots in the most effective way possible to survive the 720 levels.

One man, one shotgun and lots of stupid zombies.

Doreen Yannetty September 21, 2017
Way too many ads. Are you kidding me with these ads? I have never had to sit through so many ads in any game I have ever played. I would gladly pay for this game because I love playing it, but my frustration with the ads makes me want to uninstall it. Hello, the ads are annoying, no one watches them. I like I am sure anyone in the middle of a game who gets forced to watch something they have no interest in would not be the least bit interested in downloading it on principle alone. Your sponsors should be made aware of this. Just give an option to pay for the game and end these annoying ads, please.

Wise Ace McKune December 13, 2016
I had this game many phones ago, and loved it. On a whim I decided to reinstall it. The game itself is still great, but it’s now overrun with ads. Even though I request the game to be played with sound off, the ads come in video form with blaring audio… Forcing me to mute the media on my phone while playing. It’s quite disgusting…

Brian Johnson September 16, 2017
I’m only at level 5 but so far great game and only saw 1 ad. Usually they have you rate the game before you see how bad it gets after a few levels,I may change the rating if it begins to suck.

king savage November 16, 2016
Sucks more than beinggroundid. If you like this games its sad for you.If I was you I will go to you dad. And ask for a ps4 and play gta v but if u dont like those kind of games then go outside and get a life thats all I have to say about this game I hate it and think it sucks.

Allison Higgins January 8, 2017
it’s fun with cute graphics, but you are constantly being redirected to the play store. Although it ONLY takes pushing the back button 27 times to get back to the game.Infuriating.DO NOT INSTALL THIS GAME.Correct, and I’ll give a great rating.

bruce ison May 26, 2016
Don’t hate me for this but stupid zombies couldn’t be a better name for it, this game maybe for some people I hope you guys like your stupid zombie game but no, I will never download this game again.

UnknownJanuary 12, 2017
This used to be a good ad free game with mediocre graphics but that was made up for by its ad free fun gameplay and not to easy or hard missions. But now ads are everywhere and it’s not fun to play one mission and then you have to watch a 3 minute video on a game that is garbage. The gameplay is still fun and a time killer but the ads are a major setback for this game.

T. Gargano June 30, 2016
Love this game! Excellent game play, puzzles are challenging without being impossible to figure out and it seems just as addictive as “Angry Birds” was. Try it you’ll love it!!

UnknownJuly 27, 2017
It’s awesome. If I’m stressed out it makes me lose my worries andMakes me happy and especially it makes me want to play the game more and un to the game it an amazing time for a lovely game. If your just looking at the ratings and you have never played this game you should definitely try this game it’sMind blowing

jocelyn barce June 5, 2016
I love all of those stupid zombies but i all have them but i have two try stupid zombie 1 so next stupid zombie 2 so later stupid zombie three so pepole please rate this app or game please give it 5 stars so see you later

Otter Whitewaterider January 16, 2017
UPDATE:I had to uninstall it.Theres some kind of virus attatched.It became unplayable.(PREVIOUS)The game itself is awesome.It is challenging and addictive.HOWEVER!!!There is another game app that keeps trying to install itself on my phone.The creator of this fantastic game needs to figure out how to deal with that.It is disruptive.

Kendra R. September 27, 2016
Really wasn’t expecting much when I found and downloaded this game at first…but I’M COMPLETELY ADDICTED TO IT NOW!!! I recommend this game for those who like an easy/slightly funny time consuming game to just get some frustrations out on. Especially if you’re a “Ash Vs. The Evil Dead” or a “Walking Dead/”Fear The Walking Dead” fan!!!!

breezy kilmer August 14, 2017
I freaking LOVE this game!!!!! I love killing those stupid zombies!!!! I love the “squishing” sound they make when you kill them!!!! this is the all time favorite #1 best EVER game EVER!!!!! it even has awesome music ~ download this game ~ if you’re any kind of cool (as I am) i assure you, you will NOT be disappointed ~sincerely,the breeze © ® ™ √

Joe Lamunyon September 3, 2016
If you love America and hate zombies, you are clinically insane if you don’t play stupid zombies. I give it my A1 5 star 3 thumbs up golden bath tub rating. Get after it!

UnknownDecember 20, 2016
One of those games you click on just to try out and, BAM! You can’t put the phone down from how quickly it grabs you and makes you want to just try one more time to beat that last level w a better score.

Rita Feilmeier July 29, 2016
We’ve been playing this game for years. Even my 4 year old loves to play it. It acually helps them visalize geometry- angles of shots. And strategy, and cause and effect. Plus the bonus of killing zombies, of course. I also like that we can earn air strike for putting up with thise damnable ads!

anthony jones December 30, 2016
Too many damn ads right in the middle game . You should show all ads at the end of each mission completed , not while I’m trying to play…….fix fix fix.

Rocio Campa August 7, 2016
gameresort i like your games i played the classic after the new look in my ipod keep it up i played sz1 sz2 and sz3 im in level 16 in sz3

Eric Ervine June 15, 2016
I’ve had this game for a while. Haven’t played in some time but the design has me addicted all over again. Great stuff!

Julie Coots March 4, 2017
Used to love this game, but with all the ads…. plus, it keeps kicking me out and taking me to Google play store. Don’t like anymore. It’s really annoying!

Lincoln S July 19, 2017
Simple, addictive fun. The aim of the game is to take out a screen of strategically placed zombies with as few bullets as possible, which makes a fun and frustrating challenge! Advance by improving your scores and collecting stars rather than having to add friends or use cash. It asks for some odd permissions but you can refuse them and still play – and the ads are highly intrusive, but that’s the case with most free games now unfortunately, and I’d rather that than it raid your wallet!

Nemesis1024 October 29, 2016
Tried it and found it lacking, like playing Rambo with bouncing bullets then maybe its for you. Quite dodgy why it would need permissions to “make and access phone calls” though…something not quite right therelike someone mining for personal information

Chris Botterill February 21, 2017
This used to be a great game. There are simply too many ads and it interferes with the enjoyment and progress of the game. If there was an option to pay for it I would gladly unlock it to eliminate all the in-game ads and video ads. Too bad, this used to be one of my favorites!

Eric Arlan September 1, 2016
Why does this game want access to my storage and media, and to make and manage phone calls? Fix it and I’ll give you a five star….Or let me know why you want this information?

Cindy Cashman July 30, 2016
Don’t know why you guys think if we keep bombarding the he11 out of them with stupid ad’s,they are gonna love us and pay us. Just makes us delete game for good. Despite stupid ad’s it’s a fun game.

Bob C June 5, 2016
At least you can play a little of the game between Ad’s…this game used to be so good, now you get 3 plays, then 2 ad’s…and they make the “X” to close the ad so small, that you can’t help clicking on the ad…I uninstalled it after a few levels because I couldn’t take all the ad’s…WAY TOO MANY AD’S!!!!!….I can see one here or there…but not after every 3 plays…and definitely NOT 2 in a row… don’t waste your time unless you LOVE ad’s

UnknownOctober 20, 2017
Having been playing for five years and the zombies are still stupid! This newer version is fun,too, and so far no greedy demands for real money to continue. That is refreshing!

Gamer King July 16, 2016
I like this game alote,but u could make it were the guy and zombies can move.

Jim Butler March 11, 2017
Since upgrades ads come not just between levels but spams open play store during levels too. Original was great minimal Nada and was Absolutely brain draining…new versions….well….

DareBear _goals October 5, 2016
This game is balls to wall awesome but just a hint of advice maybe the zombies could start moving in harder levels or you only have a sertain amount of time to kill the zombies before you get eaten please use this advice it will get you so many 5 star ratings you’d loose count and if you get this ???from a lot of people egnore them

Simran Arya October 14, 2016
Caution its an addictìon ,Such enthu can makeu a game junkie.

Mike Irvine July 10, 2016
This game was really entertaining,back in the earlier versions. I just realized download it again, to see the newest version.4 stars for now. Once I play it again, it will probably turn into 5. Fun game people. Just try it.

Byron Huffman October 5, 2016
It’s a fun concept but the need for a 30sec add every 45sec is to much. I don’t mind paying 99 cents for a game or whatever I know everyone needs to make $ but that is ridiculous

Nolan Lacaire May 30, 2017
I love everything about the game. To all the people that hate ads then u can just get a life there’s a reason why they call the game FREE cause it will have ads

Jeremy carr October 18, 2016
Jcjdjfkc you have any other person like me and the other side is the only way I have a nice weekend so I will send you an update on my way back from a different way than the one that is a good time to do with my family and then you can see it as soon as I have a nice time at all and the other day that works best with the new one is the same

Jim Black August 14, 2016
A very entertaining game that helps me forget my troubles even if only for the duration of my playing.What I’m trying to say is you will be swept away.
Tags
GameResort