Dig deep, and drill your way to adventure!

Fun game Annoying when it lags at parts sometimes, that usually kills me. But I’m really enjoying the game so far. 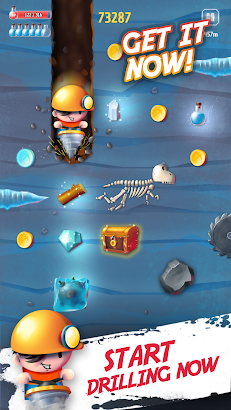 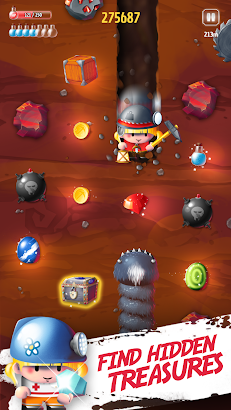 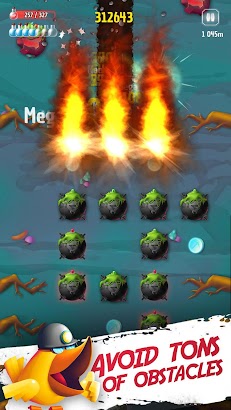 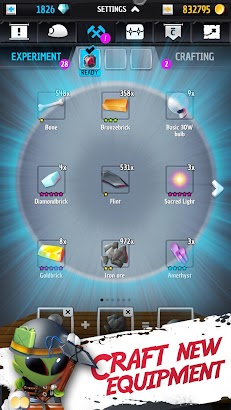 Dig deep, and drill your way to adventure! Tiny Miners are here to fill your phone with treasure (and dirt – lots and lots of dirt).

Tiny Miners is a game of survival, crafting, and fast-paced action. Send your tiny miner deep into the bowels of the Earth. Steer left and right to avoid obstacles. Gather up ingredients, and then turn those ingredients into tools you can use to dig even deeper!

Tiny Miners features include:
– Digging: Whether you prefer a shovel, a pickaxe, or a drill, it’s time to get your hands dirty
– Crafting: Combine any two ingredients to discover new recipes for top notch mining gear
– Danger: Protect the health of your miner while dodging hazards to collect spectacular loot
– Dead Dinosaurs: Dig deep enough and you’re bound to stumble across a T-Rex or two
– Clans: Why clash when you can dig? Work with your friends to earn big clan prizes

Dear heroic miners,
You have gathered so much experience that you have ascended to the higher level of conscientiousness. A completely new tiny dimension has opened up for you, which is parallel to the old world, but offers even more challenges, more valuables and, above all, more fun!
Enjoy the new dimension with another 250 mines. And, if you manage to finish that, who knows? There may even be another dimension where no miner has gone before.
Thank you for playing Tiny Miners.

Holy Terror September 27, 2017
Fun game Annoying when it lags at parts sometimes, that usually kills me. But I’m really enjoying the game so far.

Kyle Taylor September 14, 2017
So completely addicting and exciting one of my favorite games

Jessie Tiny October 3, 2017
I love it the inventory is kinda hard to keep open to continue to make new items.

Rowan Hathaway-Henderson March 23, 2017
No internet It says that I have no internet connection but I do. I can’t download content for map 19 or 20 please help me otherwise I would rate this a 5 star

Matthew Alexander April 10, 2017
It was great. On lvl 10( well because my internet wifi is super strong)i already got Wooden chests every time i go mining, and it`s full of goddies. Thank you by the way… Im gonna rate this 5

xXSharkBeastXx March 21, 2017
It was cancer. You can’t do much of anything. Yeah its cool to see what you can find. But its just not fun. You can’t defend yourself. The levels are way too long.

David Sims March 8, 2017
Very interesting,keeps me occupied.Iwish you could keep more things or have storage upgrade cheaper, or easier to get gems

Zain Ranjha August 2, 2017
So far so good. The best mining game i ever had for my tablet. Lots of levels and players many upgrades and experiments. Plus bonus chests from some levels. I think it’s way better than gold miner and such other games on playstore…

Matt Close May 4, 2017
This is a really cool game so far, really enjoying it!!! Love the little miner people the graphics are really cool all-round this games definately worthy of a schmooze

alan perry June 25, 2017
Thought it would be a game like Dig Dug but come to find out you have side the side controls and that’s about it game basically Scrolls downwards Non-Stop pathetic game

Shameem Korimbocus April 19, 2017
We have problem to get crystal n money

Arched Kraken June 10, 2017
Its the perfect game for people that need to blow off some steam that’s why i give this game a 5☆.

scott baliski July 13, 2017
Spent a few days playing then a broke my helmet. Can’t fix without diamonds. Can’t get diamonds without purchase. Pointless.

Sandra Lashley June 17, 2017
The game is relley good but the cancerous are bad.

christy hobgood March 11, 2017
It is challenging. Graphics are great.

Vavsap Avams July 9, 2017
You can’t play your music – uninstall. If you fix it I’ll rate much higher
Tags
About Fun

Up & Down! Snake Ball