Go deep down into this random, dangerous roguelike dungeon!

Nice Good simple throwback game. Advice for y’all- rescue others for more avatar options and touch the upper half of your screen to go up, the bottom half to go down. Hold a direction to aim your weapon if you have one or just run into things blade first. 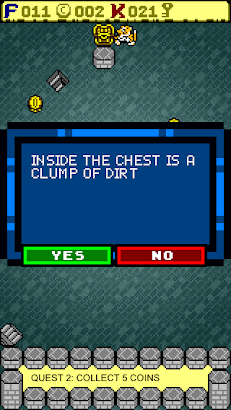 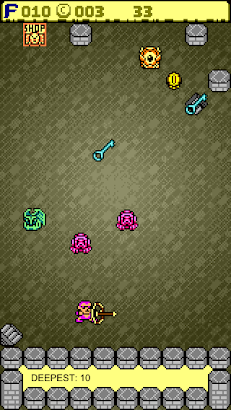 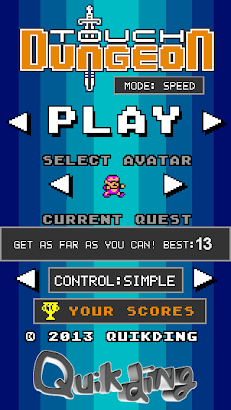 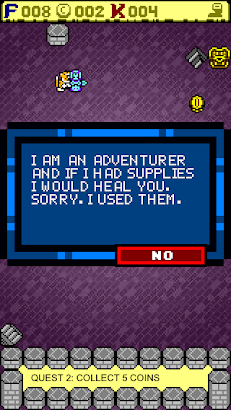 Enter the dungeon by using just a simple press! How far can you go down? What untold treasures can you pull from this deadly maze? Compete to show everyone how deep you can go!

Multiple game modes and control styles to uncover plus many rescuers to save means you’ll never stop enjoying this dangerous dungeon! FREE roguelike action brought to you by Quikding, the best in the biz.

With graphics by the lovely Monge.

Apollo Honda August 18, 2014
Good simple throwback game. Advice for y’all- rescue others for more avatar options and touch the upper half of your screen to go up, the bottom half to go down. Hold a direction to aim your weapon if you have one or just run into things blade first.

Charles Sandmann November 20, 2013
Simple missions and controls. The difficulty curve makes every play after the first few a quest to improve your abilities. Perfect for those five minutes spent waiting on the bus/subway/for your friends/using the bathroom. Give it a go, you might love it.

Reuben H July 3, 2014
Excellent voice acting, realistic physics engine, cutting edge graphics, awesome weapons, good AI – those are things I like about Call of Duty. This game doesn’t have any of those things, but it’s still pretty good, and it’s $50-$60 less.

Chris Smith January 22, 2015
Cool game, but the cowboy avatar has a glitch when he walks to the left, he stays in suspended walking animation. PLEASE FIX ASAP!

Jacob Lugaresi June 15, 2014
Pretty weird game but its keeping me playing.Love it!

Herkimer Jones December 18, 2013
I didn’t expect much from this one, but all the little goals have really hooked me in.

Alex Mason May 20, 2014
Almost something I’d expect to see on an old Atari system. Bad graphics and stupid controls.

Robert Woodruff June 20, 2014
Fun game, not a lot too it though, needs a little more depth.

Bryan Sloan-Kentta April 4, 2014
It’s free, fun, and does not require any special permissions.

Suicide Is Cool Gaming June 28, 2014
With sooo many queststo do its great for free time

ATH30S August 12, 2014
When I rescued somebody and the guy said “thank you for rescuing me” I cracked up! It sounded like it was voiced by a little kid that was forced to. Also the sensitivity is really bad. But since it cracked me up I won’t rate it one star.

Colin Grace June 6, 2014
The game is both boring and annoying to play

Elijah Sandoval August 9, 2014
do people think things like this are fun