A little stickman who LOVES to pull off awesome flips and tricks on a trampoline.

For ppl who r addicted to trampolines and doing flips off of them but ur scared that ur gonna die, download this game! You will NOT be disapointed 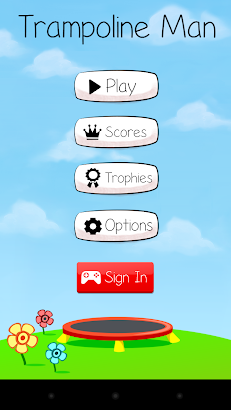 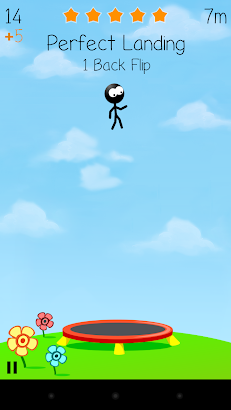 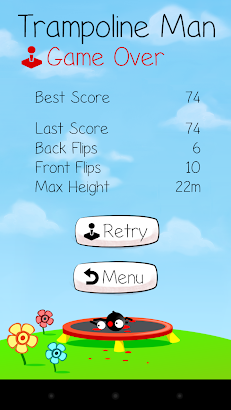 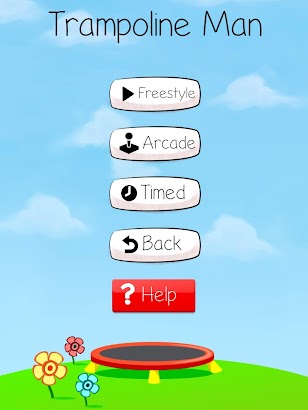 Meet Trampoline Man. He’s a little stickman who just LOVES to pull off awesome flips and tricks on the trampoline!

Have a go and see for yourself, before you know it you’ll be hooked! Happy flipping!

Key Features:
– Addictive, simple gameplay for all ages
– Three different modes to perfect your skills
– Over 50 Achievements / Trophies to collect
– Google Play Leaderboards to track your progress against your friends and the rest of the world

Modes:
*Classic* (previously freestyle) – climb as high as you can by performing flips but perfect those landings or you’ll lose height, or even worse – crash!
*Timed* – 60s on the clock to get the highest score possible
*Arcade* – follow the flip instructions, you have 3 lives – how long can you last?

Tips for becoming a Trampoline Man Pro:
– Hold the left side of the screen to do a backflip and the right side to do a front flip
– land your jumps as straight as possible (on your feet)
– Get a perfect or great landing and you’ll get a height boost and the most points.
– A good landing is still okay. You get points but won’t lose or gain any height.
– A poor or a bad landing will still get you points, but you will lose height.
– Don’t land too far on your side or it’s game over.
– More flips in one jump gets you more height and bigger scores!

rose m Fakkeldij August 30, 2017
For ppl who r addicted to trampolines and doing flips off of them but ur scared that ur gonna die, download this game! You will NOT be disapointed

Abigail MacNeill MacNeill July 18, 2017
I really like this game, i just wish you could do way more things than just front flip, back flip and just jump. But anyways you gotta get this game!!

Reuben Kimber September 13, 2017
Good game, I like it. I’m not so impressed by the fact that you have to write a review to get some levels but never mind.

Kaylah Karpinski May 3, 2017
I liked this game it dosent need wifi fun to play but i wish there were like gems so you could come back to life when you died

BTSARMY_Asheena Peydon June 14, 2017
5 stars, no 4 and a half, 5 STARS. Even though this was a game where you can only go forward and backward” its so fun.

Ben Domnarski June 14, 2017
This game is actually inherently racist because the main protagonist is an African male whom proceeds to repeatedly commit suicide

Jack Nelson June 25, 2017
Its a brillant game very addicting and very basic just really the ads I dont like but you can pay for them to go away

UnknownMay 4, 2017
I like it a lot! I had this game for almost a week its awsome! Its keeps me from getting bored too

Rosie Martin May 23, 2017
This game is amazing. It’s a great time killer, but there is a lot of adds. I would recommend getting this app it is a great app. Great graphics.

UnknownMay 6, 2017
It’s a great game. I love it because it is so addicting. When your bored this game makes the time fly

Janiya Jarvis June 16, 2017
I loved the game it was very challenging and difficult but once you get the hang of it, it gets funnier and easy??

Aziz Hirani May 18, 2017
You need to make it multiplayer because it is boring and make it so you can buy clothes for the stick man or stick girl

HEROIS Turtle July 19, 2017
Its a great game. It needs more things to do. It sometimes gets boring . Otherwise it is a great app. Definetley install it.?

UnknownMay 20, 2017
I love this game it is a amazing no wifi game so thats good if you wanted to play a game ofline.

Franklin Holiday May 27, 2017
It is an awesome game its tge best game I ever played you should put difrent charecters in it

Megan Jones June 4, 2017
It is funny when you fall on his head cause it is like a broken tomato ?

Jessica Holmes August 13, 2017
I think that it is sooooo much fun, and its sooo addicting. But the best part about it, it has NO ADDS ????? I am soooo happy

XenomeX Beats May 29, 2017
It’s good if ur bored and have nothing to do but why rate it to get all modes bit of a bad way to get reviews It’s ok

UnknownOctober 8, 2017
So hard to control. Didn’t experience many adds. At first the dying part was sorta funny. But then it just got annoying because it happens over and over at the start. I wouldn’t recommend. I downloaded and then deleted writhing the first minute

UnknownJune 16, 2017
This game gets people hyped tf up but i like it-ahna

Chris Tate October 17, 2017
I like the way he dies its hilarious but i wish there were other characters or maybe some type of jump boost system better than just star jumps.

Alex Penberthy July 22, 2017
Really good game. Fun time passer.Me and my friends live competing against each other on this game!

Angela Hunt June 4, 2017
Addicting?YES! Loved it? YES.WHO WOULD NOT LOVE THIS ITS SO ADDICTING

UnknownJune 25, 2017
Amazing, make it a bit more so that your I contact with the stick man

Ashley Hill October 6, 2017
It’s a great game for younger aged children and for people that like games. But when you fall blood goes everywhere maybe turn that factor down a notch. Other than that I rly enjoy the game

Storm Rider October 12, 2017
It is a very unusual game and is very hard to put it in any category and how when you die blood squirts out it is very hard to class it as “a kids game” but good gameplay and a very easy game to waste your time and addict you

Kaydyn Moore August 6, 2017
Shouldn’t make us rate it it to get new game modes but over all its a good game

Backcountry Productions September 29, 2017
He over rotates and it’s too hard. If your corrected the difficulty it would be better

Ann Fleming April 30, 2017
This is agood game because if your bored u can play this i just love it

Jayden Bedford August 11, 2017
It’s a good game but you just need a few more things like different types of back flips and front flips maybeEvan sideflips

Rhi Floyd-Crabbe September 28, 2017
So…. good omg such a good game play.Takes mind off things, it is a stress reliever and is such a good time passer. That is a word:)

UnknownJune 25, 2017
I love it because I am really good at flips and now stick buddy can be good too.
Tags
Jellycake Games