Awesome game for the unicorns lovers!

This game is weirdish in a good way.A seal that turns into a unicorn named Bobcorn has to eat candy to stay awake.He wants to continue being a unicorn! Cool game, but sometimes Bobcorn slides to fast and it gets annoying. 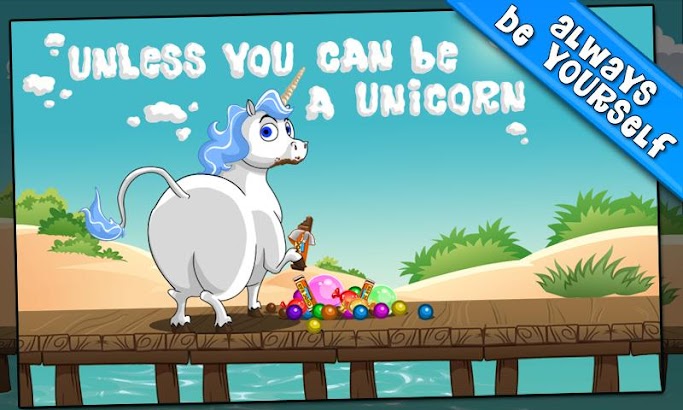 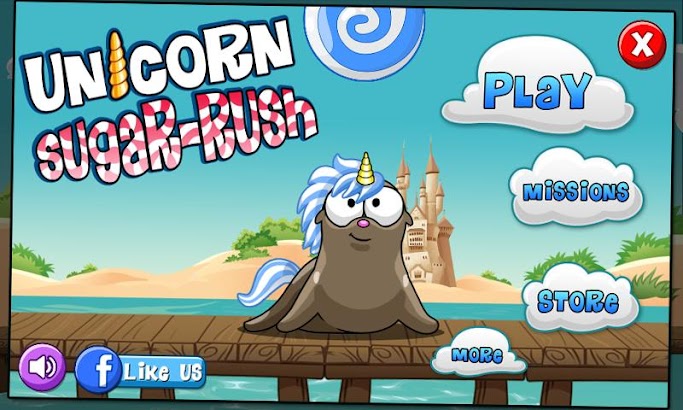 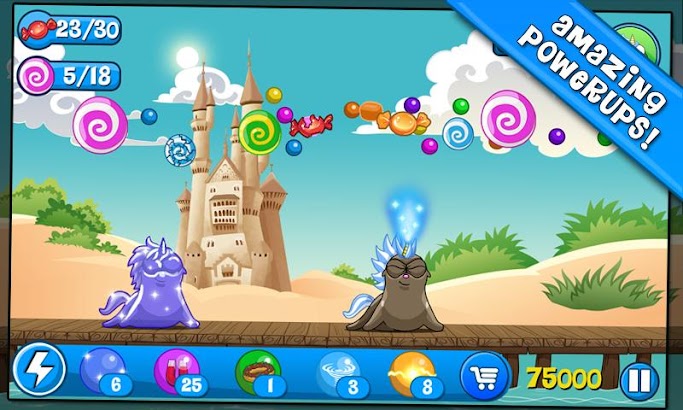 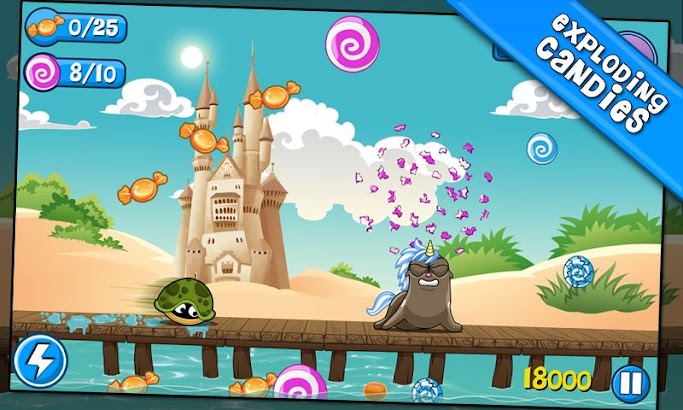 Bounce the candy on your head to get energy in this challenging and bouncy game!
Did you ever feel like you could be a lot more? That’s what Bobcorn the seal was thinking, when he took his fate into his own hands and decided to become a UNICORN! But – be careful what you wish for… a unicorn’s life is magical yet demanding, and Bobcorn needs a lot of energy to support his newfound unicorn powers! Help Bobcorn eat AS MANY CANDIES as he can and make sure he doesn’t fall asleep!
Be quick – you’ll need to run around, jump and bounce candies on your head to unwrap and eat them, while facing different surfaces and the turtles that get in your way. Enjoy the fun magical powerups and reach a sugar-rush if you can… as long as you don’t run out of energy!

Madison Sirois January 2, 2014
This game is weirdish in a good way.A seal that turns into a unicorn named Bobcorn has to eat candy to stay awake.He wants to continue being a unicorn! Cool game, but sometimes Bobcorn slides to fast and it gets annoying.

Mlp Lights March 4, 2014
Its a very good game and addictive! Only one problem the way you have to move your phone or tablet, is the problem,like in. Some games there is arrows and not hand control.Its very annoying…but that’s thething u should really look at that before you/child play the game…as I said very good and addictive.:-)

atiqah shaharuddin May 15, 2013
Nice game overall and tests your reflexes well. Can get annoying at times but I guess that just means I have to get better at it. Love the unicorn facts and fiction bit. Hehehe.

A Early June 9, 2013
Fun game but sends spam notifications to your phone about one a week.Jellybean 4.1 and up can disable these by long pressing the notification and clicking the “app options” that pops up.

Sumaiya Hossain vabna September 15, 2014
I like this game.but when ever i playing the survival mode they don’t give me any coins.they showing -coins.nd i can’t buy anything from store..that is the only prb i feel..unless i will give u the 5 star.

Stefanie Welsh June 29, 2014
I think this game is just too awesome for my phone. Adorable graphics and sufficiently challenging, but the lag on my device makes it impossible to play.

Laura Murrill January 5, 2014
Its great some times the turtle gets in the way or when the candy boss comes there’s hardily any tiny candy to eat other wise awesome game

Hobbit King November 30, 2013
If you’re ever feeling bored or have nothing to do, this game will definitely make your time more fun ? I love the graphics, they’re so adorable

Sandra Britton March 23, 2013
Super fun and addicting!Pop up ads are annoying, though.

Montelle CURTIS June 9, 2013
The Turtle Gets Me Upset Lol But Overrall Its My Favorite Game Besides Candy Crush.

Blue River January 15, 2014
i really like this app. its great however, it usually lags alot, i dont know if its me but if possible, it would be great if it could be fixed

ooga Ahmed March 4, 2013
Its really must be rated 5 stars it awesome have fun people

Trainer Helios June 23, 2013
Once again, you have created an awesome game. AND IT HAS TO DO WITH UNICORNS THIS TIME!!!

Bobby Evelyn July 15, 2013
Quite hard to play but well fun and entertaining. Could spend hours playing!!

Ruby Longworth March 24, 2013
SUPERFUNTASTIC!!!! This game has changed my life for the better with it’s amazing unicorns and candy. I recommend it to anyone and everyone.

Lorett Alarcon July 18, 2014
Its kinda of confusing with the whole unwrapping candy then eating it stuff.

kevin hinch January 1, 2014
Its a good game but it freezes all the bloody time,it didnt when I 1st started playing it but now its all the time which is a shame coz I like it .sort it n ill give 5 star .

sushmitha rajeev January 22, 2014
But its inappropriate for children cuz there will be naked people I unstitall it

Sandy Hymas May 10, 2013
I have just started playing so far so good

Stacey Shufflebotham May 26, 2017
I put 5 because of that where unicorns but trying to stay awake is hard

Nadine Trinder March 21, 2013
It freezes a lot so thats y is half and half

Elizabeth Sandoval April 27, 2013
It really is a fun game. Has many levels. The sounds are great. Its just a good fun game. Play it!

Kylie Sanders November 7, 2013
I like the whole unicorn seal thing it is so cute. Plus,it is like a game gon webkinz. Awesomeness

Alexis Bell March 25, 2013
How come it said that I will be unicorn but I win and I don’t turn into a unicorn, still a good game

Kessa Mcclure May 3, 2013
This game is really fun to spend time and increase your skills! Highly recommend it

Jacob Hutchinson March 19, 2013
It seems just perfect to pass the time and is even ok for kids to play as well. (:

Empathetic Unicorn March 25, 2013
Adorable, but it completely freezes up my phone.

john robinson June 1, 2013
good job PLAYSCAPE!you’ve maded an awesome game.Keep it up! I like it!make more games like this.thanks.thanks for making such a good game.

Chris Brock May 24, 2014
This game is awesome and so easy and hard with the evil turtle

Kadzia November 10, 2013
Really made me giggle, such a fun sweet game and lovely graphics.

Jayne Eatough August 9, 2013
Amazing but can get frustrating and fun great quality

Jennifer Sierra April 23, 2013
It unfortunatly laggs on my phone but its captivAting
Tags
PlayScape