Fight for your life in Zombie World War

Terrible game. At 3rd base I lost my 45earned cash and 16k coins. When i logged back in all is gone except the gun i bought. I finished the task but cash reward was not given. I can’t save the game so I cant open it on other device. Terrible. 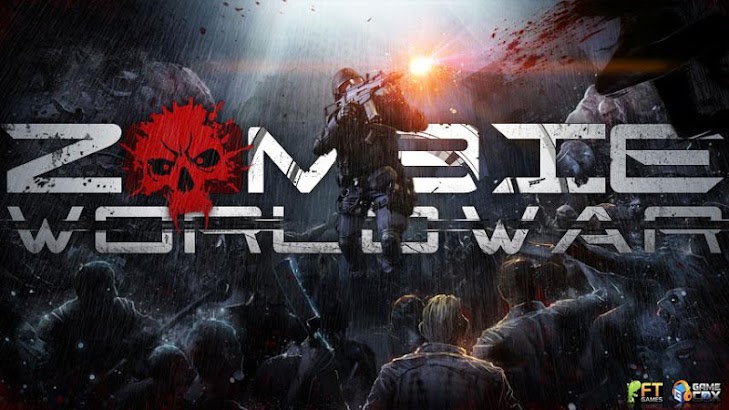 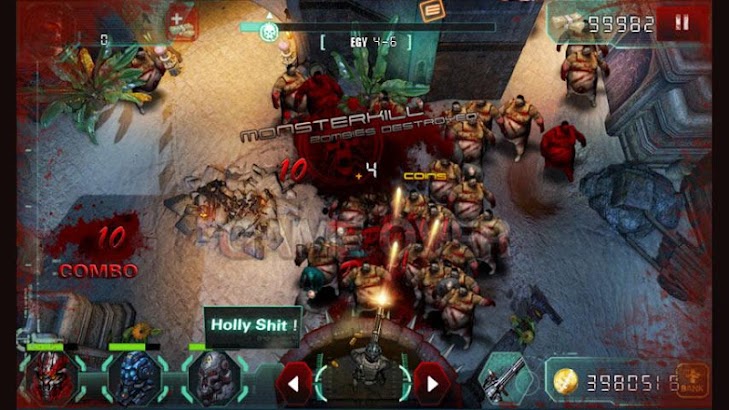 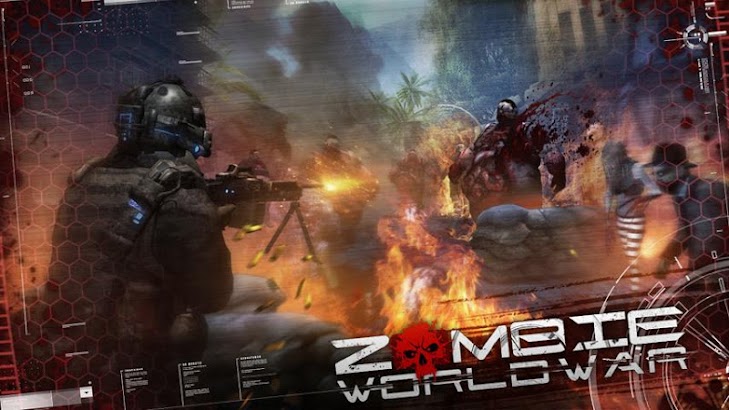 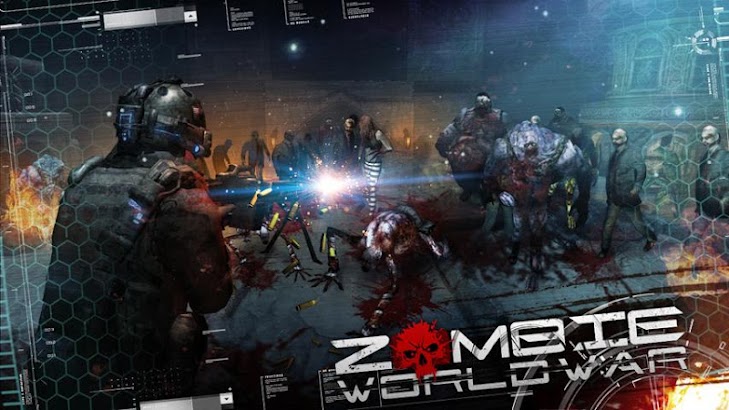 Nobody thought it would come to this. What started with a few isolated cases has now become a fight for the survival of the human race. This is Zombie World War.

The virus spread like wildfire and those infected became the walking dead. With so much panic, society quickly crumbled and governments soon lost control . Now, survivors such as yourself are the last line of defence for the human race.

This is humanity’s last stand!

It’s up to you to battle your way through 126 levels and 21 scenes in this worldwide adventure to reclaim our world.

Use all of your skills to stem the tide of zombies and battle your way to a final victory!

Fantastic graphics and sound put you in the heart of the action.

19 weapons at your disposal including AK-47, M4, RPG and Gatling Gun.

A dynamic character development system that allows you to enhance your skills in different areas.
A true world war with 3 world maps, 126 levels and 21 scenes.

Three difficulty settings for you to survive. Do you dare try Nightmare mode?

21 different zombie enemies will test your skills to the limit and keep you on your toes.

Check out Daily Tasks for your chance to claim big rewards or try your hand at Lucky Slots for bonus prizes.

marjgrace saint March 15, 2017
Terrible game. At 3rd base I lost my 45earned cash and 16k coins. When i logged back in all is gone except the gun i bought. I finished the task but cash reward was not given. I can’t save the game so I cant open it on other device. Terrible.

donald campbell November 9, 2016
There are a few free ways to get coins without giving up your email. Only one bug in an hour of gameplay, and it was while I was in the menus, I shut it down and the fame had already saved my player stats, money totals etc. Pretty great

Travis Yontz December 17, 2016
I have he ingame coins and cash but i want my gun or give me refund.

william karolyi August 4, 2017
I just spend money buying some credits for better weapons but this is the second time someone kept the money and I didn’t get my credits. What’s wrong with you guys great game but someone is taking the money. And you want people to play this… so they can get their money taken to. Shame on you! !!

Sean McCarty December 23, 2016
Great way to kill time without killing your data usage. I don’t mind the playing ads to get free coins/cash in the game, but they need to stop shoving ads down your throat for nothing at every step.

UnknownJuly 1, 2017
Good game slack developer doesnt get back. Lost 1457 cash and about 16k coins so dissapointed i was so close to getting the gold rpg hours of play wasted i wana cry.

Stoner Kushington September 21, 2017
I’m still owed 664 dollars for downloading an app reaching the set goal and not receiving my reward. I’m a new user to a lot of these games and this is my Devine time not being compensated.Fix this issue for 5 star rating

Madison Lawson July 31, 2017
I love this game. It’s very addicting and sometimes challenging. The only issue I have is the graphics aren’t too great and waaaaay too many ads. If those were fixed the game would definitely be 5 stars!

J Gillo December 18, 2016
After you do one or two bonus missions and you back out to world map, it crashes and closes game…Stopped getting in game cash for completing regular missions, too. Only getting gold now

Sabrina Miller March 26, 2017
So far so good. I stopped playing for a while and restarted. There r a lot of videos to watch that just pop up need to work on that. Maybe 1 at the end of each section would be ok

Clayton Morse July 21, 2017
This was a four star game for a while. But, when I was prompted to complete an offer to gain an x amount of in game cash. In stead of getting the cash I was promised, all of my hard earned coin was robbed to zero.

Chris Butler November 5, 2016
There’s been an ad for every level completion I have played.No going around or skipping it. Game is good for play while on the toilet,don’t need both hands here. I wouldn’t put the time in for upgrades.Just play and dump in a day.

yaswanth reddy December 2, 2016
Still not improved your game. It dont have link up with google. need more rewards……… But liked it because, can play continuously instead of waiting for energy.

Anthony Gross June 29, 2017
I played thia game back in 2013 and it seems different some how, never the less i still like all rhe same. I’m crazy about zombie movies so i love playing zombie games. I can’t wait until you guys make an doom game, like rhe version from the nintendo 64.

TheWyldstalion February 15, 2017
One of the coolest and best time killers. Like a tower defence game but zombies and cool guns. Ads are short and the watch ads for free cash & coins is awesome too! Great game and good job!

gridorin February 9, 2017
Please remove zombies that directly appear at the deffend walls.. its suck… no skill can beat that… how i can get an S rate if that zombies just appear in front of me… i thought we fighting zombies not ghost.. even i purchased the best weapon i still got C because that ghost zombies…

gerald wright June 9, 2017
The ads that play after EVERY SINGLE MISSION really takes you out of the game, and takes up far too much time that could be spent playing. An ad every four or five missions, yes, or limited energy for missions I could live with, but not this. Pass.

vicky hidayat santoso August 9, 2017
I have finished all of the easy, hard, and nightmare mode. The best weapon is rocket launcher. And now, I don’t know what I’m going to do. Is there any updated level…?

Larry Sims March 10, 2017
Awesome time killer, hours of addiction. I enjoy the controls and the combo rewards. Only complaint would be hour long it’s going to take to get the best guns, but hey I’m impatient.

drake smith November 26, 2016
It’s definitely a fun game and welldesigned but it’s so hard to play repeatedly because after every level or two you guessed it an ad shows up the only nice thing about watching so many ads is the fact they are pretty varied

UnknownJuly 10, 2017
Game is fun, but the ads ruined it for me.. No.. I will not download you final fantasy, candy crush mash up you keep shoving down my throat after every level..

Kevin Johnson November 23, 2016
After maxing out my weapons, the game took all my hokd and cash. After attempting to contact the developer, there was no response. I contacted google, they said to contact them if the problem is not fixed… Now google say they have nothing to do with it…

Jean Newsome November 3, 2016
The first level was fun then when I started the hard level, it was not much harder and a repeat of first level. Nightmare was just another repeat and not much harder. Was very bored by the time I beat it. Time to move on to another game.

Marc Beydler February 24, 2017
Too many ad pop ups (same ones over and over) and poorly placed banners (covers important content). Could have been a great game.

Barry Parsons December 31, 2016
The game is OK, nothing special. There are way too many ads that are too long. A pop up is one thing, but a 30 second commercial between every level is annoying. I’m deleting it and moving on.

Jason Peters January 3, 2017
Its a phucking joke how much crap u have to watch to play such a stupid game

Daniel Ursry November 14, 2016
I’m a zombie killing s.o.b.,this game kicks ass!in between every 1 minute level is 30 seconds of ads you can’t opt out of.not to mention the ads they download to your phone so they they can run more ads when your offline.totally ruined a really good game with non stop ads.whoever made this game is a sellout and im sure laughing all the way to the bank.if you like to watch ad after ad this is a game for you.if your a gamer,dont even bother downloading,its not worth the frustration involved.

Endercreeper 843 July 7, 2017
this game is so fun I won’t lie the 98m is so op I watched over 30 ads for the stuff my only 2 complaints are that there’s an add after every game and that the reward for completing the level is not good

Archangel Adriel May 19, 2017
Too much annoying ads everytime you complete a stage. And how do we save our progress in google/facebook so we can continue playing with another device?

Preeti Loharuka March 8, 2017
Interesting game Many of the zombies came together.My sister doesn’t played games like shooting and war but after playing this game she said that now she will play this type of games.It was very interesting to shoot all the zombies together and the game is very good.You must download the game.At least see the game.If you feel that it is a bad game then your thinking is wrong.I enjoyed playing the game .

Zoe Elliott November 25, 2016
I have been playing this game for a week!! I love this game so much ? those people who don’t like this game are so stupid Zombie for life!!!!!! People who play this game should give it 5 star rating??

Raresnipe 72 March 29, 2017
This game is very addictive it is the best game I have ever played nothing wrong but a little to much ads highly recommended DOWNLOAD IT ITS CALLED ZOMBIE WORLD WAR

bryce akin July 21, 2017
Great game! Too many ads and some game ads stink like zombie offal.

Mishka Tvorzky February 12, 2017
The graphics and controls are terrible, there’s no plot or story & I don’t want to be forced to watch a 30 second ad after every level.

ZORT FC February 8, 2017
Not bad, but gets a bit monotinous. A couple of ads, but not to hard to collect the coins and notes needed to upgrade. Note to other players. Kit yourself with the DB and the M249. The Golden Weapons are actually very week. Needs more maps to continue storyline.

David Holt November 4, 2016
I like the game but to many adds in the game they come up after every level please take some of the adds away doesn’t have to be all

ronald barlow February 26, 2017
I’ve only been playing for a day but so far it’s pretty cool ,as for the adds I don’t think there are anymore than any other free games I play

A.D. Ford March 5, 2017
Great game, fun and addictive. The graphics are nice the levels increase in difficulty at a good pace. The variation between zombies makes things interesting.

Lucas Gibson January 25, 2017
Its nice i just wish there were more wayd to get money. And i also think that its kust tooooooo many ads ok lik loose all the ads plz
Tags
FT Games