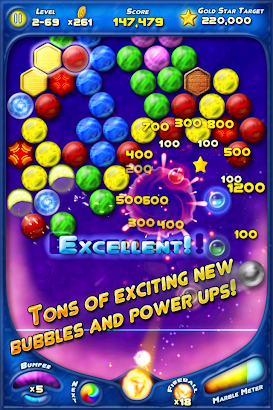 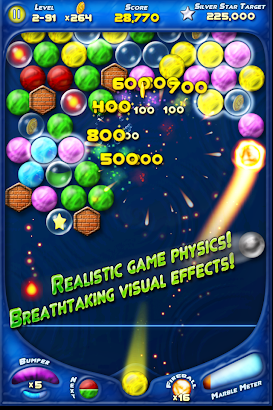 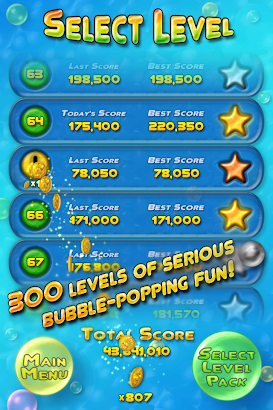 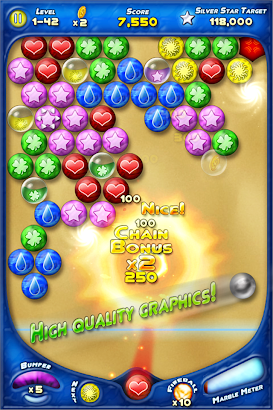 This bubble shooter game is easy to play – shoot bubbles, clear the marbles and bust the hidden key bubble – yet amazingly fun and challenging!

WE WOULD LOVE TO GET YOUR FEEDBACK!
Your reviews/ratings are very important to us, and they’ll help us bring you free updates with more great features and exciting new games!

Developed and published by GameOn
http://www.gameonarcade.com

Lina Athanasiadis February 3, 2017
I have been playing this game for very many years, taking it with me to every mobile. I come back to this one every time, after trying others. I challenge myself to get the gold star rating before moving on to the next level- sometimes it can be many months before I achieve it or admit defeat and move on. I have only 7 levels where I have a silver or bronze level. The ads don’t bother me unless they are loud or long – the 30 second ones that can’t be skipped are the most annoying. But the game is great.

MïssCärrä Jäe November 23, 2015
Definitely challenging at times and a lot of fun. I do have one issue and that’s the ads that pop up for just McDonald’s, so far, and cover the screen so I can’t see… So basically I either have to click on it and go back out of it, or exit altogether and start again but it happens way too frequently, I’m starting not to play because of the hassle. I don’t mind the regular ads here and there in between but while I’m playing and covering the screen? No, thank you. Fix please!

Sufi Sayed November 27, 2015
Been playing this game for a long time…and love it….it’s not difficult but challenges you enough to keep playing on n on… The BEST in Bubble games. A must have. But you should really removeads with sound. It’s really inconvineant… Playing the game in a doctors clinic n suddenly loud music ad. Also please make spring transparent. Been playing this game for a king tome but still cannot understand how the scoring works

David Pollock October 13, 2016
This is hands over if the most fun and challenging games I’ve ever played. I pop bubbles in my sleep and every time I close my eyes. It’s an addicting fast paced fun way to pass idle time. I just finished the 300th level, with gold star scores on the first 200. Now I’m going to go get gold stars on the rest of them. GAMEON ROCKS!

Shane Gilmer April 27, 2016
This game Sucks I’ve seen better aim from drunks driving home from a week long bender! Google play must be paying people to give games like this high ratings! Most of Google plays bubble shooter games are awful! Paying money to win is cheating!

Some One. November 8, 2016
This game literally cheats, I’ve complete over half of the game, I’m not just a sore loser, this game cheats, it’s rigged, that’s wrong. How am I supposed to have fun when I see the game doing things that screw my hole play up or force me into losing? Fix your game, the algorithm, the bubble selection, the obstacle placement. A game isn’t fun if it FORCES YOU TO LOSE EITH NO WAY OF COUNTERING IT. Highly dissapointed in this crap excuse for a fun game. It’s probably just a money scam.

manvitha asa November 7, 2016
After reaching 3rd world, I’ve lost my progress in the game and I had to play from first level of first world. And after quitting the game I am loosing all the progress each time.

Brent Carey February 2, 2017
Good game, excepting strongly dislike the ads.The in-game ad remover does not function properly, and am getting ready to get rid of it on my device.I do not wish to use the HD version of the game either.Using v1.050.

Daniel C. May 10, 2016
I used to play this 4 years ago, and was delighted to find it here on the Android market. This game utilizes strategy and doesn’t have stupid pandas in it.

Brek Sahn April 4, 2016
The fireball does not fire when you press on the screen you have to press multiple times. At higher difficulty levels after game 80 in the second world the game delibaretly makes you lose by giving you bad colour choices. And the balls do not in the direction you want…

Peter Shelley December 14, 2016
I have no life now.At some point I assume that my girlfriend moved out, but I’m not sure when.Otherwise a great little game, quite addictive.

Dee Killer June 10, 2016
This game is so mind-blowing, that I want to beat all scorein front everybody! In fact, I ? it so much that I can take on every challenge they can throw at me. Ha ha!

Chris Fry March 22, 2016
Had this on iphone – it used to be a great game but there’s an ad with loud sound after every game. Totally destroyed the fun

jaymz way July 7, 2016
I go to aim the ball it refuses to let it go n i have to keep tapping the screen then it finally lets go of it by then it causes me to loose the game…

Diane Mcclure November 6, 2016
Was a great game, but now as I progress I keep getting a black screen which needs a you to restart the game. Also too many adverts, needs ad free option.

Sandra Riddell August 7, 2016
It’sfast-moving and fiercelycompetitiveagainst the computer. It’shard to contain the excitement it generates. I’mtotally addicted. Keep up the good work.

Easton Meyer January 15, 2016
This honestly is the BEST bubble shooter game their is! It’s not slow & boring like most..& the sound effects amp you up!

Kathy Nicolaisen December 12, 2016
I can’t get past level 88 in world 2 I been on it for a dam 3 months and god forbid when the ads are so dam rude being over whelming where you have to wait and can’t over it nice subliminal way of advertising is BULLSHITwhy can’t you have a game that doesn’t have constant ads I believe it’s rude and it has to and will change and that’s my right

Christina Morrison May 29, 2016
Its good I just think it cud be more exciting and more helpful like it doesn’t give you any info on what the “odd” bubbles are I had to figure it out by myself

Mohd Khaja October 1, 2016
This game is very intruting when I’mboring my self I have play this game

Laura Nester August 9, 2016
I love the bubble pop games and this is the best I’ve played.Colorful, music/sounds, constant lives, interesting levels…….. Really like it all.If you like this genre, give this one a try.

nicci Eanes January 8, 2016
Very addictive one of my favorite games…… Just wish the star would change when I replay the level and get a better score!

George Campbell August 8, 2016
It’s not a bad thing. Better than some, worse than others. I will update this review as I get farther than into the game.

Mylie-Anne Díaz May 27, 2016
It’s a real fun game with many variations so you never get tired.

Ms La’Nae November 25, 2015
Uninstalling after playing for 20 minutes. Will find another Bubble Shooter game with no ads.

Jerry Lemus-Reyes May 6, 2016
This is one addicted game..I have beat it many Times but it never gets old..can’t wait for a new version to come out

Pius Peter M. August 16, 2016
This game is so nice that I play it at any little tie I have. It keeps me company just as if am with a group of friends.

Jillian Henninger November 20, 2016
I can’t see the bottom of my screen because of the ads on the top of my screen…very upset because I use to play this all the time now I can’t

michael gaffney January 29, 2016
Great game. Can’t put it down. Would be even better if the ads between each game would be removable.

MoeKha wal March 5, 2017
I can’t go to level two without? getting 50 gold coins even though I finished ? all of level one…. How do u get gold coins it coins tell you until you finish level one. But it? don’t tell you how to get any gold coins. What should I do I don’t want to replay level one all over again. Please please please help

Mary Campeau November 5, 2016
I always come back to this game.I absolutely hate being interrupted with all the advertising.

Linda Sacks December 29, 2015
Popping bubbles before they get to the bottom

Mokubi Khalikane September 5, 2016
The most thing i like about this game is that it has a high challenge..and it’s irresistible

MARIA EGAN February 7, 2016
Has everything its such fun and good entertainment ow love it if u want a good game this is it . no questions INSTALL IT !!!!!!!!!
Tags
GAMEON