Match bricks, collect totems and active them to break the challenging levels.

Game is great but if you want the “free” points FORGET IT! Scam for sure, answer questions about yourself and no points. 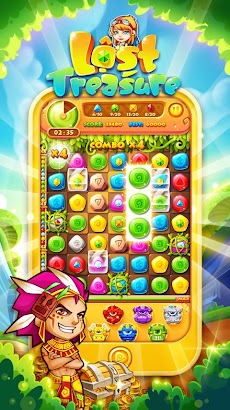 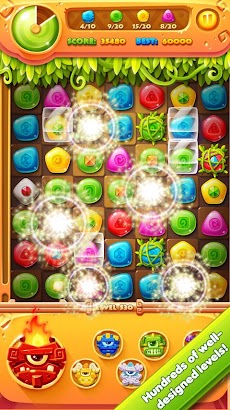 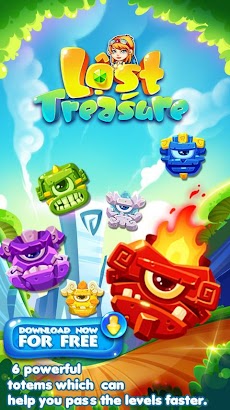 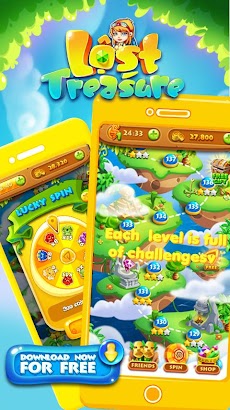 ☆☆☆☆☆ Highlighted Features ☆☆☆☆☆
★ A new flavor of time limited match-3 game, easy and joyful.
★ Splendid new graphics, fresh style, each level is full of challenges.
★ 6 powerful totems which can help you pass the levels faster.
★ Hundreds of well-designed Free levels! Free levels and game modes added regularly!
★ Sync your progresses with facebook and compete with your friends!
★ Easy to learn, challenging to master.

☆☆☆☆☆ How to Play ☆☆☆☆☆
★ Switch and match bricks in group of 3.
★ Active Totems to help with hard levels.
★ Less time you pass a level, higher score you’ll get.
★ Lost Treasure is completely free to play but some in-game items may require payment.

This update brings:
– Improved performance
– Fixed bugs
Enjoy it and thank you for supporting Lost Treasure! Become a fan of Lost Treasure on Facebook:
https://www.facebook.com/losttreasureezjoy

Ella Harris August 17, 2016
Game is great but if you want the “free” points FORGET IT! Scam for sure, answer questions about yourself and no points.

Christina Rata January 29, 2017
Love the game its so coolMy lil girl even likes the game to

Miriam Ferreira November 22, 2016
Love the game waiting for more levels, has been waiting for a while now, would like to know if there will be more levels.

Lynn Carlee December 27, 2016
Anyone would love this game to play. It’s alsome.

Jeffery Johnson August 7, 2016
I really like this game,its challenging & fun

Yvette Kuntscher June 17, 2015
Game shows to be getting a new level soon but that has already been over 6 wks. That is not good. It’s fun to play but if you have to wait that long for a new level it gets to the point of not interesting me anymore. Will hold on a little longer but will delete it if new levels are not in by the end of June.

Linda Turnbull October 5, 2015
Just started.?so far so good. I’m sure it will be like all the others. Once you get the hang of it it becomes more difficult until you get stuck on something forever and choose to uninstall.

Holly Owens July 28, 2015
So far so good. If the game would just go to the next level without having to go all the way out to where you have to tap on the next level that would be a 5 star.

Sonjia Palk March 24, 2015
Great advancement on the usual match 3 game genre.Challengeing, yet attainable, stunning graphics and best of all;finally a game whereby you earn your game money by completing the tasks as opposed to having to purchase it for real.Very highly recommended.

Lisa Brownell February 26, 2015
I like the game…but then the ads pop up faster than my score at the end of a game. Very annoying……

Teri Artis March 7, 2015
Until you get stuck, short of paying there’sno way out so stuck I’ve been for months so now uninstall seemsto be the way to go

Dannette Skibinski May 11, 2015
I spent money to get rid of the ads and get my 1000 coins I have not received my coins so it will not let me move on to the next level where am I going so I can continue playing? I also received my confirmation email

Shonda Allberry October 1, 2015
I love it but needs more coins faster…it wont let me get my daily gift after i went all the way to the big chest and didnt get anything!!

Jhopeful BTS November 20, 2015
Is just a bit confusing that’s all other then that its AWWWWEEEESSSSOOOME!

UnknownAugust 14, 2015
I love this game! I love the boosters that you don’t have to purchase, that help you! I’m unable to put it down!

Victoria Ruthe February 27, 2016
Just started playing and loving it so far!Except the ads between each level. ..that I don’t love

rose diela February 6, 2016
I just play level by level and its never boring because every level has it own challenge. Come download this game and lets enjoy the challenges.

Audrie Dicso February 19, 2015
Needs to keep descriptives on totems and what they do the descriptive drops once you use the totem and cant remember them all

Dean Clark II March 15, 2016
I am Uninstaller because it doesn’t save my progress.When I come back to it, I am back down in 1.

Ashlie Renner September 28, 2015
Over all this game is fairly good. So far I haven’t had any problems with it.

Sue Martin March 11, 2016
I absolutely love this game couldn’t be any better. Everything is syncedup great the sounds, the music, the graphics, everything. Its also challenging but also fun and relaxing.

Pam Willis March 7, 2015
I installed this game a while ago and hav, nt played for a time . Recently found it again and have enjoyed playing it . It, s fast moving but once you get the hang of it it, s fun to play .
Tags
Ezjoy
Facebook Twitter Google+ LinkedIn StumbleUpon Tumblr Pinterest Reddit VKontakte Share via Email Print