What kind of lover are you? Take the tests!

Not happy Not good at all.Would not even let me log in and kept on saying there is an error. Disappointed! 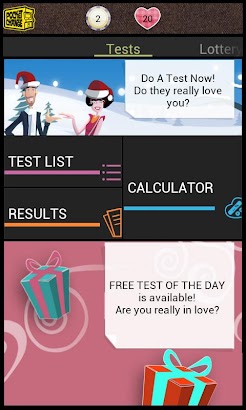 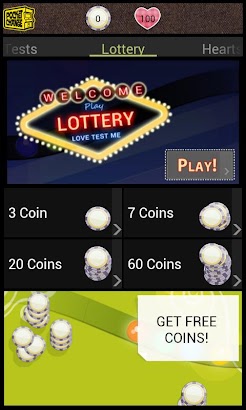 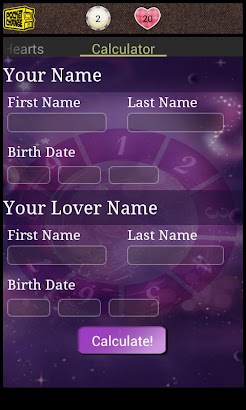 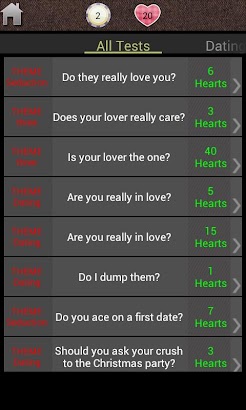 What kind of lover are you? Take the tests!

“To love and be loved” is a legitimate and universal desire
Whether you are single or in a relationship, you need to know:
How seductive you are,
if you are a good kisser,
whether or not your jealousy is justified,
if your relationship will last?

In short
Love: Test me will help you
Thanks to its great variety, to find a soul mate or learn to love them better.
And, above all, you will be entertained for a long time to come with new tests each week.

What are you waiting for? Love: Test me!

At this festive time, we have prepared some tailor-made tests:
Judge for yourself!
What type of present is perfect for your partner?
And, for singletons, find out your chances of starting the new year in a couple.

Love: Test me features:
• One free test each day
• New tests each week
• Back catalogue of varied tests
• Themes for everyone
o Singles
o Couples
• Event themes: New Year, Valentine’s Day, Celebrity Tests, etc.
• Rewards
o 10 hearts for completing a test
o A lottery, which also helps me to earn hearts
• A calculator which works out your best compatibility
• The ability to share my results via Twitter, SMS and Facebook

Get connected and choose your test!

Katrin Towdiee September 1, 2014
Not good at all.Would not even let me log in and kept on saying there is an error. Disappointed!

Rebecca Milne February 2, 2015
This game dies not let you play it unless you login your Facebook or email that’s sooo stupid

Keirstin Burleson July 8, 2014
the app hasn’t even downloaded yet…& I have a fast phone with enough storage but it’s on 12% after 10 mins

Jane Doe August 22, 2013
I can’t see the test lists or even my past results when I access it.. please fix your app

Jayla Wilford December 20, 2015
It took forever then said no connection but I had all 5 bars full

Ervin Streetman September 20, 2013
This app helped me find out my best friend liked me. Now we r a couple.

Developer AMA LTD. October 14, 2013 Dear Ervin, we’re glad to hear that Love Test Me was of actual help to you. Additionally we wish to encourage you to try out the other mods from the Love Test series.

Chelzi Annon January 23, 2014
Wont even let me register or sign in… This sucks

Maddie Eversfield October 29, 2014
This shouldn’t be around

Developer AMA LTD. October 21, 2013 Dear Brandy, we’re glad to know you enjoyed Love Test Me.Because of this reason we wish to encourage you to try out the other mods from the Love Test series, which we are sure you’ll love just as much.

Yanique Jackson May 10, 2015
Bad application. Does not allow registration

shanti requinta October 17, 2014
This app is not letting me log in

Sashidwdfwfwf Kanth August 10, 2014
Throws an error. Doesn’t let me in

Dina Ramadan July 11, 2014
I really loved it great app it helped me alot but it is too slow try to avoid that

Marie Owens July 19, 2015
I tried logging in and it wouldn’t even let me do that

Mariah Guerra Guerra June 3, 2014
How do you like this

Shelby Campbell January 21, 2017
This app wouldn’t even let me log in.